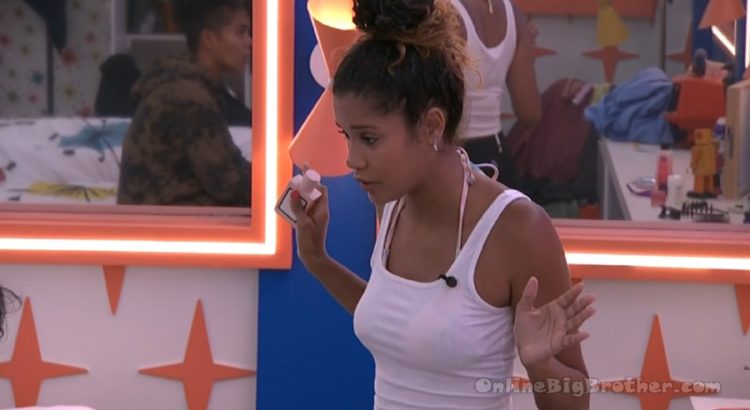 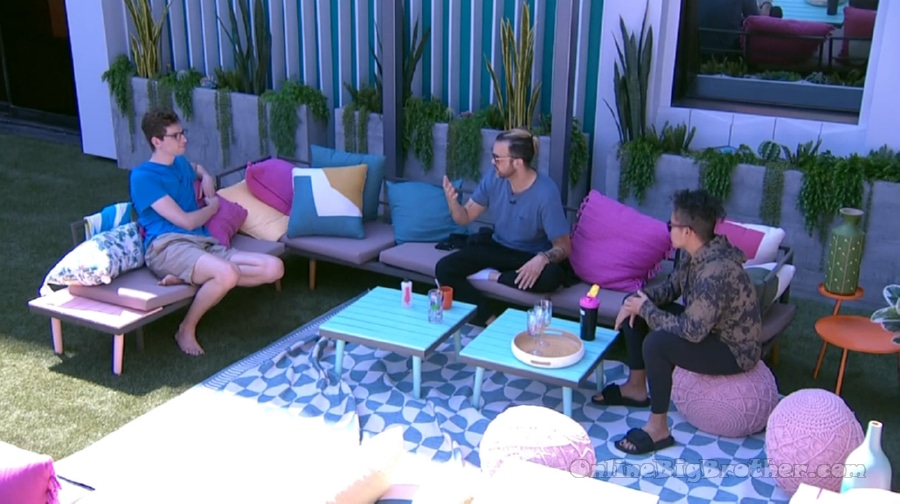 10:15 am Daniel, Nicole and Michael
Backyard chit chatting about last night and the sleep in the Have nots.
Nicole – last night was crazy 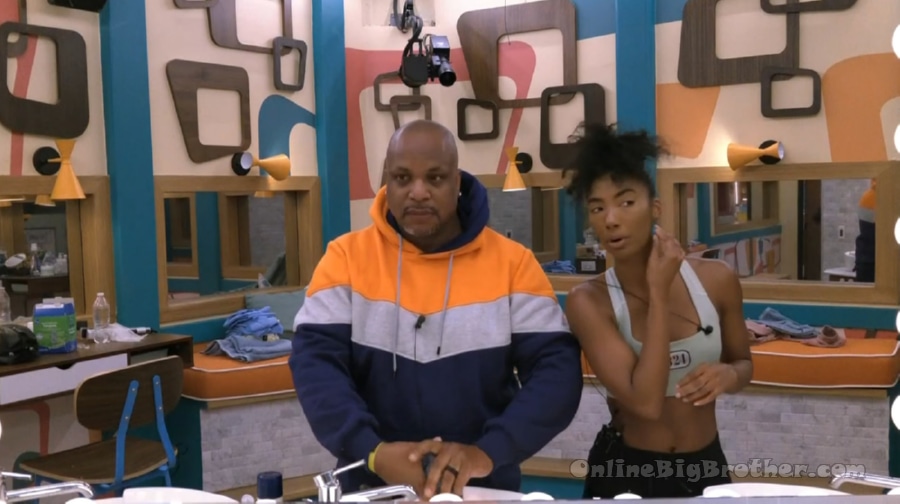 10:16 am Terrance and Taylor
Taylor says at least if she stays and wins HOH she has a reason to go after someone. It’s not just a random draw.
They whisper with the water running… 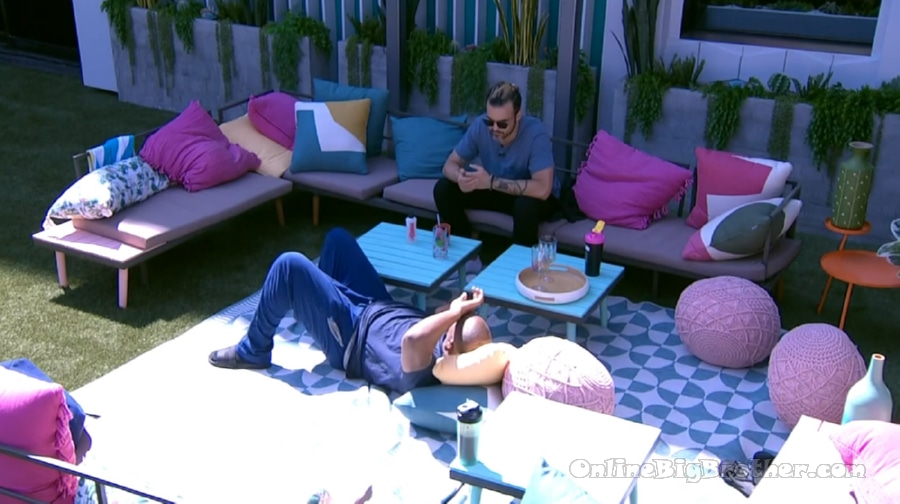 10:34 am Terrance and Daniel
They count 4 days until eviction.
Terrance – what do you think the aftermath is going to be like
Daniel – Monte, Turner for sure aren’t going to know. I think Jasmine is going to tell Joe day of. He’s very gung-ho for HOH. He hasn’t tried yet he said he’s been throwing competitions. Which makes sense.
Daniel explains ever competition Joe can throw and make it not look obvious he will. “He told me he doesn’t want HOH for awhile. Now he’s a bit fearful”
Daniel – I guess he told Jasmine I’m 100% going for this one. So she wants to save face and be like Hey the house is shifted I’m so sorry.
Daniel – I respect that She’s covering her ass. She didn’t put us up so I got her.
Terrance – F** yeah
Daniel – I hope I get one more power soon to show you and Michael my allegiance. Sorry about that first week. I’m going to prove it to you by not putting you up again.
Terrance – I Believe you already Bro. 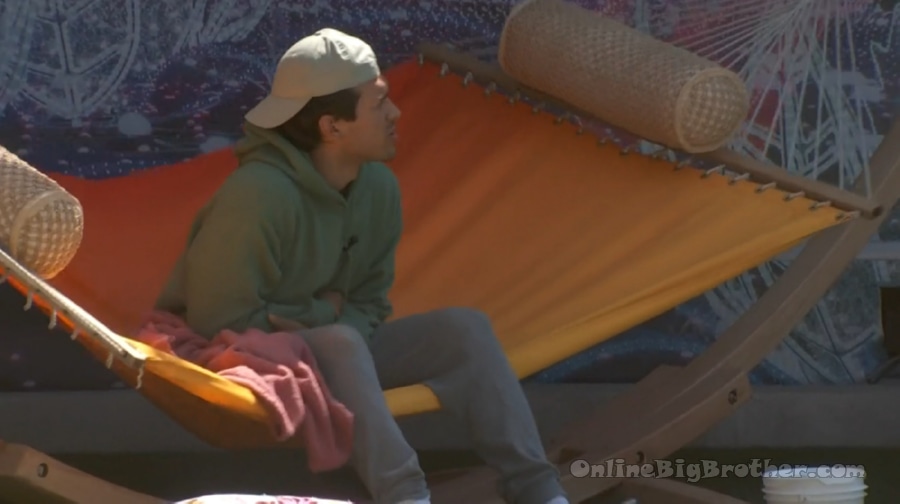 10:50 am Daniel, POOCH, Nicole and Taylor
Daniel to Taylor – How you feeling this morning decent?
Taylor – I need water all day and next time they bring wine don’t let me have any
Daniel – Oh my god I’m not in control of that
Taylor – Waking up was a little rough but they immediately called me into the DR so.
Daniel – next time I’ll gladly take your portion of wine
Taylor – I needed someone to share that with me. Clearly

Despite a life threatening ankle injury Jasmine enters the backyard. 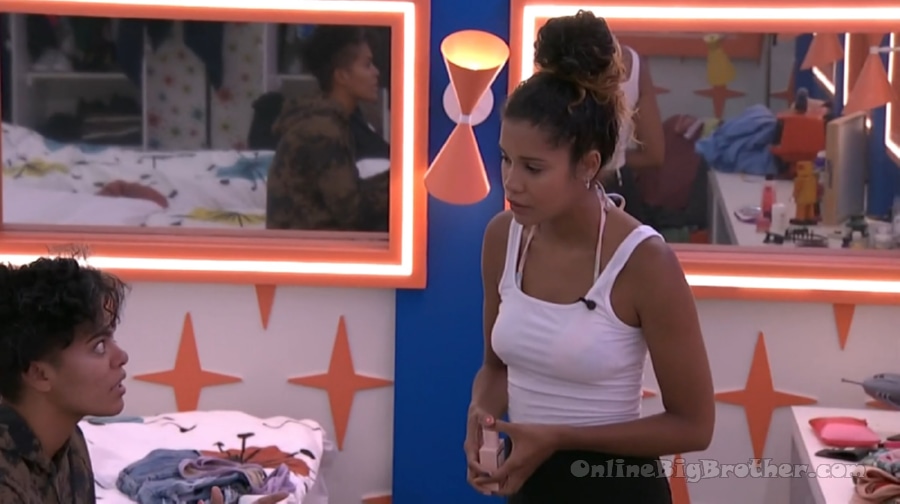 10:57 am Ameerah and Nicole
Ameerah says at this point they are balancing their two alliance “I’m going which whatever one is winning”
Nicole – I’m the same way. I’m just glad you and I are on the same page. There’s a part of me that feels bad because in Big Brother history there was never a women’s alliance (Ball smashers BBOTT)
Ameerah – I would love that to happen but I can’t be the sole person I need them to make it happen you know what I mean. I would prefer that
Nicole – all the decisions they are making are personal
Ameerah – who?
Nicole – the women
Ameerah – I know it’s not strategic.
Nicole – the fact that they want to go forward with the guys that we originally wanted to
Ameerah – Get this. Monte told me that Indy tried to start an alliance with him and Joe
Nicole – I new she was going to do that
Ameerah – I don’t want her in the Jury
Nicole – we can’t have her in the Jury
They agree they can’t be the ones that take out Indy
Ameerah – if she make Jury she is not voting for us. She’ll vote for a guy, Monte, Joe or Kyle.
Nicole – I’m the type of person where the Girls alliance, if we even want to call it that. Came to a head after all our other shit I’m loyal to a fault this is what is most important.
Nicole says it’ll be harder to get Daniel, Terrance and Michael out than it is Monte, Kyle and Joe. (in terms of strategy and not losing end votes)
Nicole – if Taylor wins HOH we’re good
Ameerah – I’m gunning for her to make it 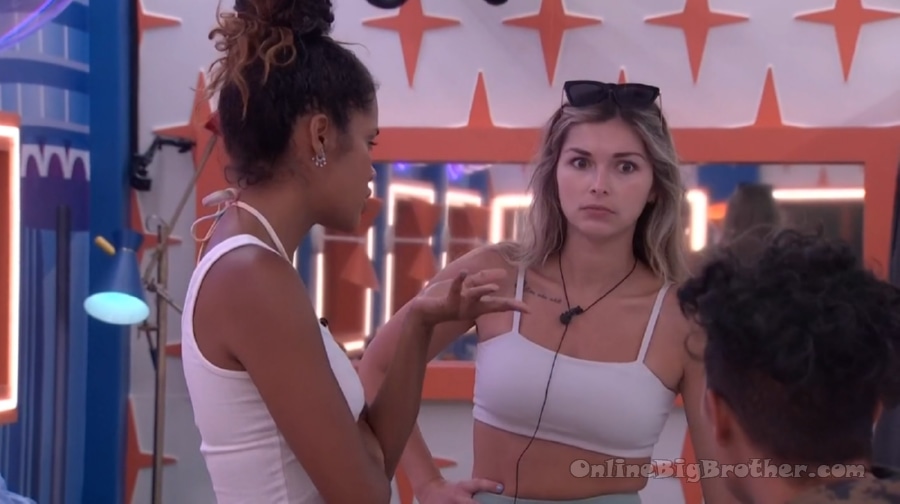 Alyssa joins
Ameerah – did you tell Monte or anyone about the 5 alliance. Beween us three Daniel and Jas? ]
Alyssa – no
Nicole – just don’t say anything. Nobody knows about our six so we don’t have to share about the 5.
Nicole – did you hear POOCH threw Monte under the bus?
Ameerah – how?
Nicole – to me and Daniel. He pretty much said there’s a stronger person in this house that should replace Taylor.
Ameerah – did you tell Monte that?
Nicole – no, I told Jas though. 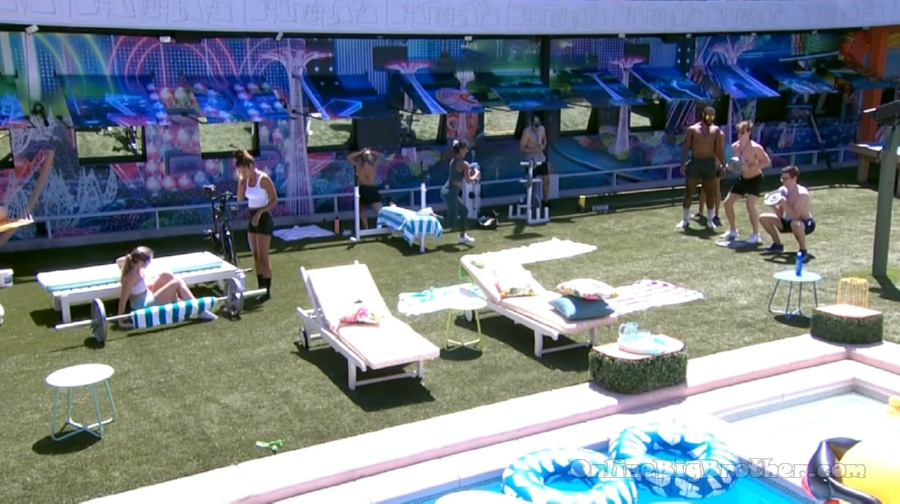 (The tweet thread below has Joe, Monte, Michael and Kyle doing their hip thrusts’)

This weeks eviction will be aired on Friday which likely means 24 hours plus feed outage. Thursday to Friday.

12:07 am Feeds go down for Power of Veto Ceremony 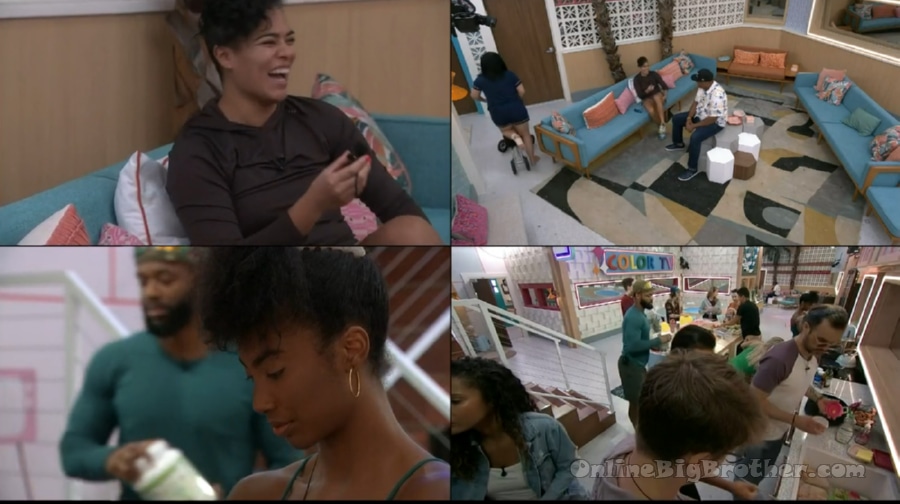 The CBS live show? What about on Paramount?

My question obviously:
will they live evict friday,
or tape evict Thursday and leave feeds off until friday.
I know what bbcan would do. What would bbus do?

I’m thinking it will be taped.

bbcan would turn off feeeds on Thursday morning, and sometime Sunday night send out a message that feeds will return Monday morning. am i wrong?

HAHAH yeah.. actually the tweet would go out Monday morning.

i love CBS but i hate CBS News

I really want Taylor to go but it just wouldn’t be right to not award Pooch for being so stupid.

Oh My
Reply to  Dementia Joe

don’t forget Pooch has one extra vote to keep him safe this week,…..HIMSELF!!!
LMAO

I’m sick of Jazz’ achey breaky foot. She is pushing it to the limit. One of my most disliked players

The Beef
Reply to  Kym

But I LOVE the squeaky wheel routine Big Brother puts over the top whenever she “rolls” into the room (and yes I know they used it when Christmas had her scooter back in season 19). All the “superfans” in this years cast seem to have forgotten Christmas won the “track meet” sprinting competition that season, even though she was unable to run, due to her competitors throwing the comp to her (she didn’t have to eat her way to the win, like Jas did).

Did anybody else out there know that “this” is a two syllable word, as in “Thi-yis is the nomination ceremony.” Now I was born in the south, and have lived there all of my life (Tennessee and Georgia), but I don’t know if I’ve ever heard anyone destroy the English language quite like Jasmine does. I’d be willing to bet she pronounces the word “siren” like Gomer Pyle did on the Andy Griffith show – “sireen”. Don’t know that for a fact of course, but just hearing her talk, that sounds like the way she’d say it.

Reality TV
Reply to  The Beef

Paul should have won season 19 solely on getting Christmas that competition win on one foot.

He lied about the fries.

I still hate Paul for that heinous fry lie. Unforgivable! 🙂

Shawnie
Reply to  The Beef

I live in Georgia and it’s way over the top