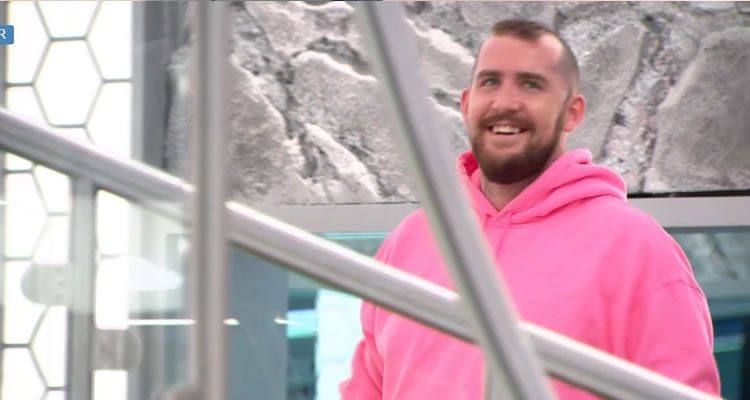 Looks like we have another pre-vote blow up in the BBCAN5 house. DAmn this is a good season.

Dallas, Dre, Jackie, and Ika
Dallas swears on his mother’s f****g life he’s not with Dillon.
Dallas says he only needs 1 vote he’s got William, Dre, Jackie, Cassandra, Ika, Gary. All he needs is Neda.
Dallas – you guys lose a vote you lose an ally
Ika says people are saying that the fight with Dallas and Dillon during the POV ceremony was planned.
Dallas denies it.
Dallas – f*** what Demetres want do what’s best for you’re game.
Jackie – Demetres is being flippy floppy
Dallas says Sindy is in Demetre’s ear
Dallas – 1 more vote and I’m good
They think Kevin might keep him that might be the vote.
Dallas – Bruno is working with Dillon and Emily.

Counting votes.. GAry and Ika
Gary – Dallas is going to stay.. he is
Gary – JAckie is working with the french connection that’s 3 for Dallas, Sindy is going to vote Dallas to go..
Ika – whose going
Gary – I think Emily is
Ika – what votes do we have
Gary – I think Emily could go.. there will be a divide with the votes..
Ika asks him to let her know where he’s voting because she’s not going against Gary,.. Emily comes in
Dallas – i’m going to set the house on fire before I go

Dillon – I don’t care what you say
Dallas – I don’t care what you say Go F*** yourself how about that
Dillon – f** you .. you’re a little f****g b1tch bro
Dallas – you’re the f***g b1tch
Dillon – keep talking like that
DAllas – you’re the f***G b1tch
Dillon – you f****g idiot
Dallas – you’re a f***g liar that’s what you are. You’re trying to sabotage me .. f*** you
Dillon – I told you I swear on everything I love on this f*** planet I never said I knew you outside this house.
Dillon – the only person I knew outside this house is bruno We never met.. We’re facebook friends because of John and arlie
Dallas – makes a lot of sense you guys know each other
Dillon – you’re delusional
Dallas – I see you two stuck up each other’s a$$
Dillon – you’re lost
Dallas – no i’m not lost .. I think i’ve been found my friend .. I’m f***g tell you right now

Dallas goes on about Dillon and Emily have a side deal with Bruno , “I see it clear as day”
Dallas – Emily considers Bruo her best f**** friend
Dillon – you’re lost
Dallas – I’m onto you

Dallas sasy 3 people are going around telling him that Dillon is saying that he knew Dallas outside the house.
Dillon – I don’t care what they said you goofy f***
Dallas – you’re so full of sh1t it’s coming out of your ears buddy
Dillon says he swears on his niece’s life he never said he knew Dallas outside this house and if that doesn’t pull weight than Dallas is a “B1tch made fool”
Dallas – ok sounds good .. prey that I go home this week
Dillon – prey what.. What the f** are you going to do Dallas
Dallas – I’m going to knock you the f*** outta this game is what I’m going to do Dillon

Dallas screams he’s going to knock Dillon outta this game, says if they can take out Dillon’s queen this week he’ll take out the king next week.
Dillon – this block thing has you all f***d up.. You’re desperate bro
DAllas – you’re full of sh1t you’re cards are played
Dillon accuses him of making a scene to get votes.

Dallas continues to scream
Dillon – you’re a chump bro.. I wish we were in real life and you were yelling at me like that you’d get the taste smacked outta your mouth

During the day I’m going to go light on text. Below are some/most of the game conversations.

3:44pm Task they have scripts.. They believe it’s part of the HOH tomorrow.

Dallas tells Them that Neda and Sindy looked right in his face and said they’ll vote for him. Cassandra says Demetres doesn’t want Dallas to stay and Neda is with them.
Dallas – Kevin for sure I think.. You said he wanted to keep me right
Dallas counts his votes, William, Gary, Ika, Cassandra, Dre, Kevin, Neda, Sindy, JAckie.

** Sounds like they are still planning on voting out Dallas. They are going to try and split Cassandra’s side up.

Cassandra tells Dallas “You’re leaving tomorrow you don’t have the votes”
Dallas says Cassandra, Ika, Sindy, Neda have all promised him votes.
Bruno and Kevin are both saying they’ll vote with the house
CAssandra – You gotta talk to Karen and I’ll talk to Sindy and Neda

9:05pm Cassandra does the Sindy Dance

Wow Dallas, over the top. I wonder if Gary will rally votes to keep him. During this fight with Dillon agreeing to them being two votes with Emily, bad game play on both ends….

Thanks so much for watching the feeds 24/7 so I don’t have to. Much appreciated!

Thanks Melissa, but to be honest i’m not watching it 24/7 saving that for BBUS. During the day I’m just trying to post the important conversations in video format.

What happen to OBB? This place is like a ghost town.
Can’t wait till Dallas is gone on Thursday. I’ve meet smarter toddlers.
And they brought him back because?
Why is everyone so down on Emily? She seems ok to me.

a) the first week is always slow with comments
b) we’re not live blogging the daytime so just videos for the most part are going up 2/3rds of the time. We almost didn’t watch the show at all but decided to give it a shot at reduced coverage. I’m trying to post just important game conversations and the odd funny event. Night posts are more our standard format.

I can’t take these Canadians seriously. Are they capable of actually getting mad? Watch Dallas will say “sorry” before he’s evicted.

P.s. Ika is probably the only Canadian in there that does ever get mad but that’s because she has a chip on her shoulder and wakes up on the wrong side of the bed every morning.

Ugh!i can’t stand Hoe-mily and her smug face! I think i hate her, ika, sindy more than sna-cole! And that’s major! It’s only 2 weeks in!

I feel so bad for Dillon ? I hope he stays. He’s like a friendly giant. I think he would be a good loyal player.

why are they fighting

Dallas is starting Drama to prove to the house he’s not working with Dillon and Emily.