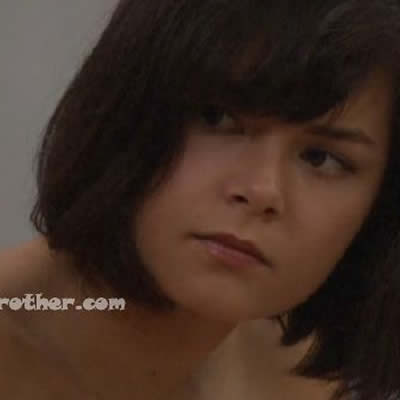 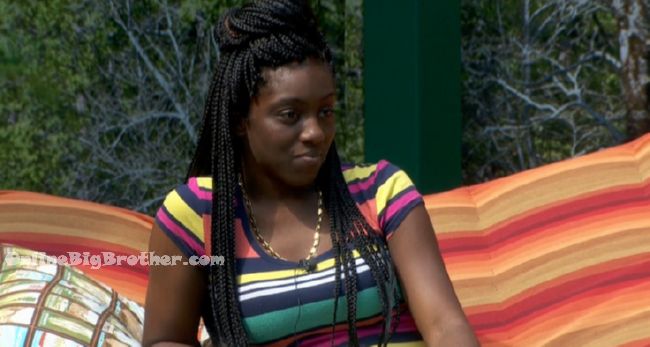 James points out that Natalie doesn’t really talk to the guys, asks if she’s noticed how Natalie leaves the conversation.
Da’Vonne has noticed that

James – she might be an OK girl she just chose the wrong side.
James adds that Natalie’s been telling him she doesn’t talk game with any of the guys. The only information she gets is from Bronte.

James – she’s not throwing out any targets to me.. She’s Still team unicorn
Da’Vonne talking about Tiffany throwing a funky vote like Audrey did last season adds that Tiffany really likes Audrey. (Every day Da’Vonne has a new anti Tiffany angle)
James says Michelle and Tiffany will be the ones that flip if anyone does, they are very close and will flip together if at all.
They are worried if they cut Tiffany too early she’ll tell everybody about the 8 packed so for now keep it cool.
Da’Vonne about Tiffany – the slightest thing will break her
Da’Vonne likes Michele says she’s still staying strong.

Paulie joins them says he hates “That mother F****rs mouth”. Adds that Jozea doesn’t respect the game “Just here for the instagram followers”
James says Jozea is a lot like AJce from last season
Da’Vonne agrees.
James thought it was going to be Paul the most like Jace but he’s calmed down

Paulie thinks Paul is only being cool because he thinks they’re part of plan. Once Jozea goes home it’ll be chaos on the other side.
Paulie – Smooth 6 weeks.. I feel you get rid of Vic, get rid of Paul the rest of them are just going to chill.. I don’t see Bridgette, Bronte and Natalie do anything to shake that momentum
Paulie now saying that Paul is a bigger competitor than Vic maybe they should get out Paul first
James says he’s starting to think the same.
Da’Vonne says they will have to backdoor paul, She leaves.


Paulie says the newbies had a plan to take out the vets starting with james. If it wasn’t for the teams.
James thinks production added the teams to make it fair for them.
Paulie says he was really excited to find out James, Frank, Da’Vonne and Nicole were back in the game.
PAulie – Franks a beast
James mentions how Frank dominates competitions.

James says if they win HOH next week they can just chill. Adds that he cannot win the HOH his team must lose so they can get rid of Victor. 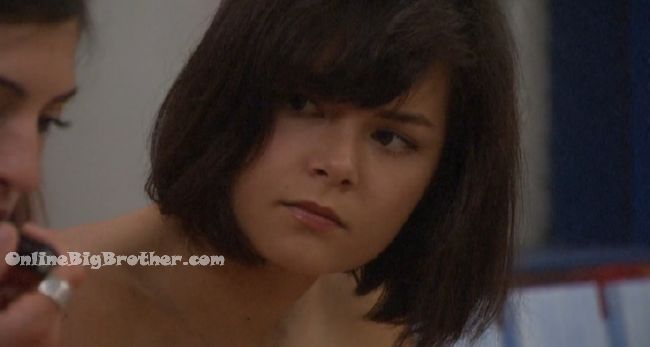 3:58pm Bronte and Bridgette
We have the upper hand on that side of the house (Victor/Paul/Jozea)
Bridgette thinks Paulie is leaving but isn’t sure.
Bridgette – I don’t trust anyone
Bronte – if Jozea goes home we have to hope one of us wins HOH
Bronte explains the teams will start picking each other off it really depends on who wins HOH.
Adds if Jozea leaves they lose the numbers making just a roadkill win not enough they have to win the HOH. If Jozea stays and they just win Roadkill they still have the numbers
Bridgette – We gotta try and break through with that other half

Bronte – I don’t feel like i’m very liked by Tiffany, Nicole, they leave the room they stop talking.. They hate my guts .. they would send my ass home
Bridgette thinks they will take out Victor and Paul first.

Bronte says if one of the girls on the other side win HOH they have to get them to target the guys over them. Bridgette suggests they give the girls a 1 week deal to just target the guys. If they win next week they’ll stick to nominating guys.

Bridgette – I trust frank a lot, I don’t know which way James will vote..
Bridgette says Tiffany, Nicole and Da’Vonne spend all their time in the HOH room.
Bronte – just have to wait.. 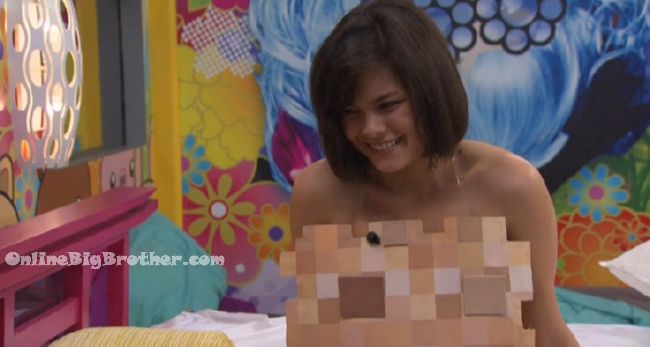 4:18pm Bridgette and Corey
Chatting about getting the pixels off at midnight.

Bridgette works for a company taht does nursing for the embassys hopefully when she get more experience she’ll get a foreign placment.
Bridgette – I just want to experience life and have fun.. why not who would turn that down
Bridgette – I want to be a flight nurse.. those are bad-ass nurses..
…..

Corey wants 3 or 4 kids brings up a story about a kid on his team whose father has 5 sons, “He’s got his work cut out for him.. that’s a lot of money to spend on food”
…….

Bridgette heard you can ask live feeders for stuff and they will brign it for you, “I don’t know how it works”
Corey asks the live feeders to tweet his friend and tell him he’s a “little b1*h”
James joins them..
Corey asks how many people on the live feds, “1000?”
James says there’s way more.
Corey asks if he ran around naked would it go on twitter.
James says it’ll be all over the place.
Corey – my d1*k fell out over there..
Corey is always wondering “Did they get it” (the live feeders)
James – always assume that they do 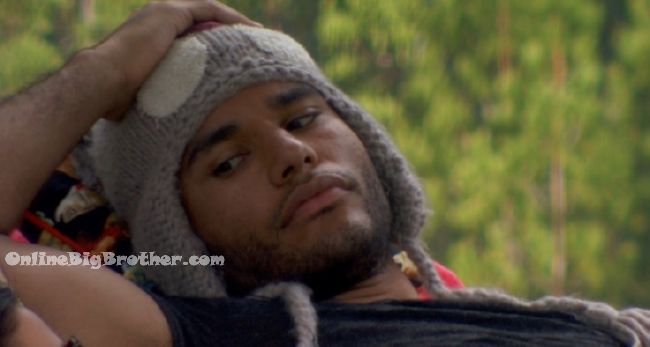 4:16pm Jozea and Natalie
Sounds like James tried a mini prank on Jozea when he’s in a bad mood. Natalie trying to calm him down.
Jozea – I’ll put everyone on blast..
Jozea – every second is paranoia.. most of it is f*** real.. dumb a$$ fu****s
Jozea – I’ll whoop everyone’s a$$
Natalie – we just have to make sure Da’Vonne and Zakiyah are secure, Ignore everyone’s Bukllsh1t… people are starting to be rude to me i’m not going to let it get to me..
Natalie – they act like they are joking but they are not.
4:37pm
Jozea – I can’t stand PAulie, he thinks his social game is on f****g fleek
Natalie says Paulie was threatening her with a non threat. telling her he knows about her back home and she’s trouble.
Natalie says her rep back home is 100% clean (Paulie’s company did the promoting for the open casting call that I assume Natalie went to)
Jozea – his social game is manipulating minds and I’m honest..
Paul joins them..
Jozea pissed about James, Corey and Frank always changing the subject when he walks bye.
Jozea – when I walk into a room there shouldn’t be any changes to the conversation..

4:43pm Jozea and Natalie
Jozea saying all the words coming from Paulie is “lies lies and more lies”
Natalie – if people flip flop on you and they’re on the block.. they’re out 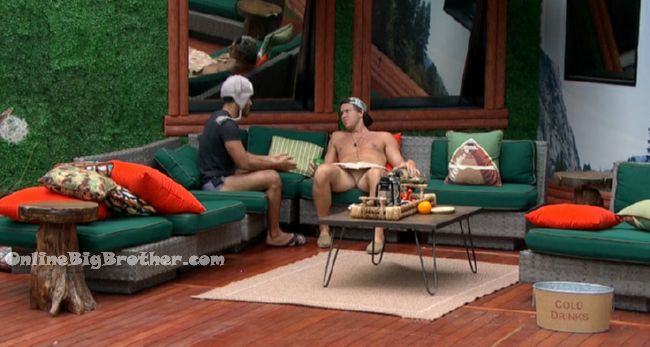 5:08pm Jozea and Frank
Jozea says Corey and Tioffany asre not voting for him, “Fo Show”
He’s not sure about James’ vote, ‘He’s very good.. he’s got that military background.. you can’t read those people”
Jozea adds he can’t read Tiffany, “there’s no energy there’s no flow.. ”
Paul joins them says James will vote with them.

Jozea is just too friggin much.

I’d like to see him out this week, just because he’s an arrogant ass. People shouldn’t change the subject when he comes by? Who does he think he is?

Oh yeah, the massiah, and savior.

I just hope the producers don’t decide to keep him around for ratings. It’s Frankie on steroids. And i’m tired of him already.

I like most of the others though; or i don’t mind watching them, at any rate.

So far (i KNOW it’s early) the edits on the show match what we’re seeing about the players off the show too – unlike other seasons, when they made edits to show people in a better light than they deserved (Amanda, i’m looking at you)

Showing my face for the next couple of days!!!
Ya gone miss me when I’m gone!

Is there anything left to say about Jozea that hasn’t been said already.Huge douche!

Kind of funny how the regressive houseguests think that James is shady when he is the most loyal of all these houseguests. Do they not like Asians? If you want to find a racist then the answer is always look to the leftist who proclaims to be so in touch with racism.

I hope someone washes that damn hat, because it’s starting to look ratty. And they better have the 7 second delay ready when Josea gets evicted because the boy – excuse me, Savior – is not going to be happy.

Btw, where do you think Bronte hides her helium tank?

I fit firmly in her douchecanoe

I didn’t they I could hate Jozea more, but then he said “fleek”…

Uh, oh. DaVonne just told Tiffany that James is worried about her, and now she’s about to lose it. Stupid, stupid Da.

Days whole game is to try to get people to think negative about other people. She told Tiff James is worried about her to stir the pot. Only Day fears Tiff. She is doing the Audrey thing she is telling everyone Tiff is doing.

Day will be gone soon. Her game play is so weak and under the belt it gets u no where in the game.

Day is a total disaster at this game. So obvious how she plays. Boring. Dirty. Lies. Can’t wait till she is gone. It’s just not fun to watch a game like hers.

Tltb
Reply to  Alice in Flames

You’re right. Audrey 2.0. She’s been telling several lies to her own alliance, I might add, she’s going to get caught.

And Tiffany didn’t melt down like everyone thought she was going to. It’s just Da trying to push that idea. I wonder why she’s so focused on Tiffany? Must be because she’s Vanessa’s sister. Tiffany really hasn’t given her any other reason.

I wish they would make Joz put some pants on.

This is almost TOO good. It’s like someone told Jozea ” Ok, were gonna need you to act like the world’s biggest asshole, and be completely unaware of your assholeness and everything else happening around .” if they did, this guy deserves an Oscar.

I’m not a Frank fan, but this is funny
“Jozea complaining about Tiffany wearing sunglasses indoors. Frank: Yeah, what are you, a poker player? ” Tue 5:20 PM BBT