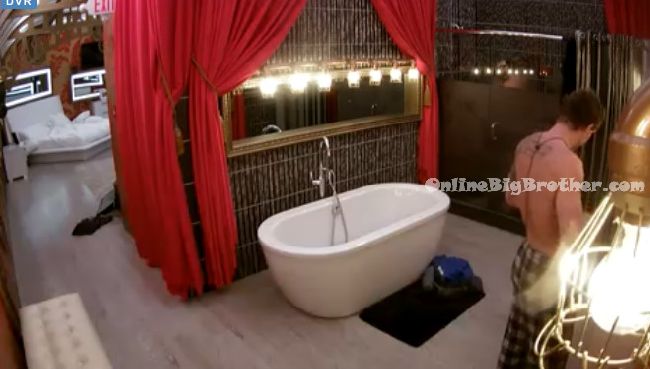 8:30am Bobby heads into the HOH room with the new batteries. He tells Bruno that he had the best sleep he’s ever had in the house. “I had the bed to myself. I sprawled. I woke up with morning wood! It’s a good sign! Still works, little f**ker!” Bobby tells Bruno he will see him down there and heads out of the HOH room. Bruno finishes his shower and heads to the common bedroom. Bruno talks about how there are a lot of movies he wanted to see on the Shomi tablet. Willow asks him if he took a shower with the curtain pulled all the way over. I like to do that and not even touch myself, just to splash around. Meanwhile in the kitchen Bobby comments to Jordan that he already looks like a havenot. Jordan says he hopes he’s not. Sarah talks to Jordan about the POV. Jordan suggests she pick Bobby to play. It will create some distrust, like why is she picking him. And if Bobby won it he definitely wouldn’t use it. Sarah says if I picked you it would expose us. Jordan says she could and if he won it he could save her but it would expose us and we’re here to win a 100K not just last another week or two to jury. 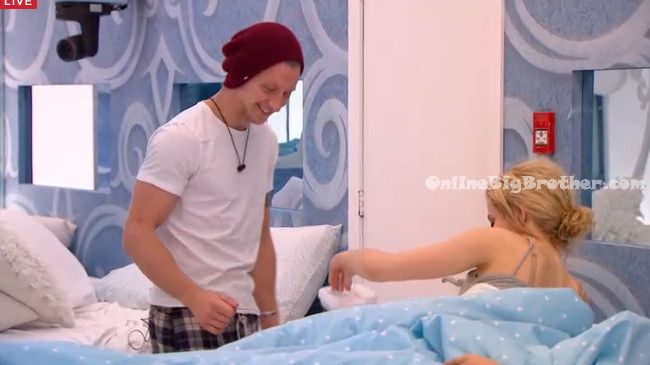 Up in the HOH room – Kevin talks to Bruno. Kevin says Johnny using the veto on me had nothing to do with me. They just wanted to get out Graig. I am not comming for you, you’re good man. And if you win next week we can bounce this back and forth. Kevin says I haven’t gotten into anything solid yet. Bruno says I am not going to backdoor you. You’re good. Unless Canada has something to do with it, if its out of my control. I would love to work with you. Kevin repeats he had nothing to do with Johnny using the veto on him. Kevin says lets get to the end of the week and lets lock down something! Bruno says I would love to. Kevin says and with Pili 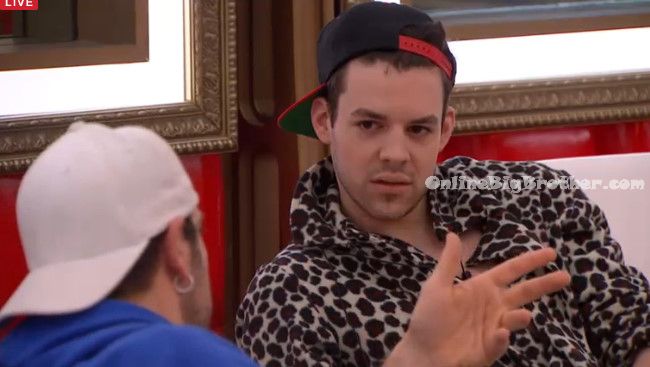 9:30am In the bedroom – Zach, Willow and Bobby talk about who to get out this week. Bobby says getting Sarah out this week is a waste of an HOH. Bobby says he is scared of Johnny. He’s a competition beast. Putting Johnny up doesn’t get more blood on their hands. They talk about possibly trying to backdoor Kevin. Bobby says we’ll talk with Bruno. Bobby leaves. Zach and Willow talk about the HOH competition. Zach says I can’t believe we were allowed to help each other. They f**ked that up. Bruno got a lot of help. 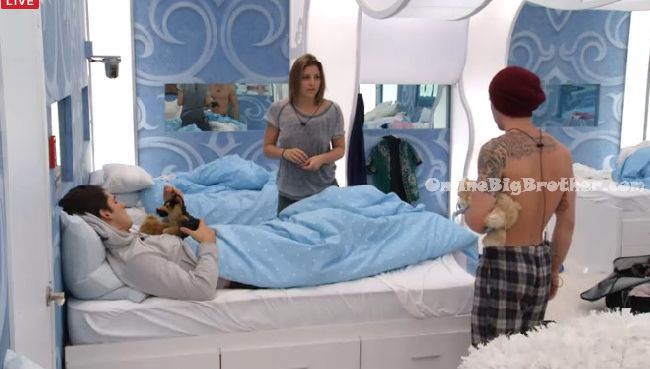 10am In the bathroom – Willow goes into the shower and shows Pilar and Ashleigh the bruise on her butt from last nights HOH competition. Ashleigh says willy!! It looks so bad. Willow asks did you guys see the whole thing? Pilar asks is there more inside? Ashleigh says spread em?! Willow says she’s snowboarded for years and never had a bruise that bad. Willow heads down to the kitchen and shows the other house guests her bruised bum. She says that it hurts so bad. She feels like she was violated. It wasn’t consensual.


10:10am Jordan is up in the HOH room talking to Zach about how Sarah was pissed at first when I told her not to pick either of us. Zach and Jordan talk about needing to get Bobby out. Jordan says Bobby is done next week. He is going home! He is done! Zach says Bobby trusts me so much. I bet I could get him to throw comps to be and then backdoor him. Jordan says we need Kevin for the home stretch. He’s a beast and can win comps for us. The fact that Bobby is thinking about wanting to get out Kevin is bad. If he gets him out, he’ll be coming after me next. Jordan says Willow needs to go too. 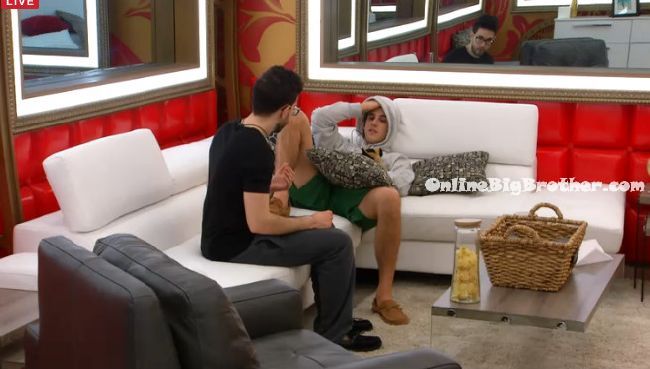 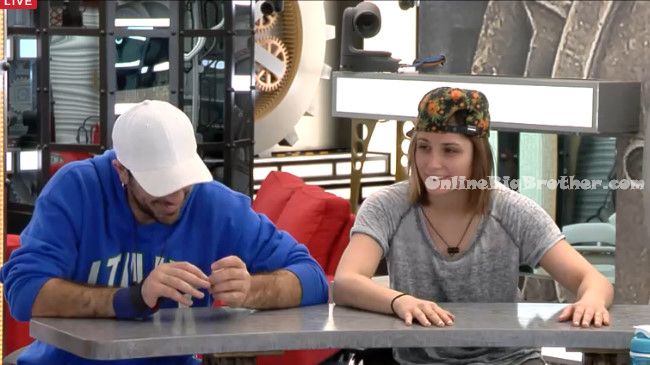 In the kitchen the conversation turns to talking about size and if it matters. Willow says all the guys she’s been with were 7″ or bigger. The last one I’ve seen was 8.5″, it was good. She says I measured it because I was like what is that?! Bobby says that when he measured himself .. back when I was a kid.. I was 6″. 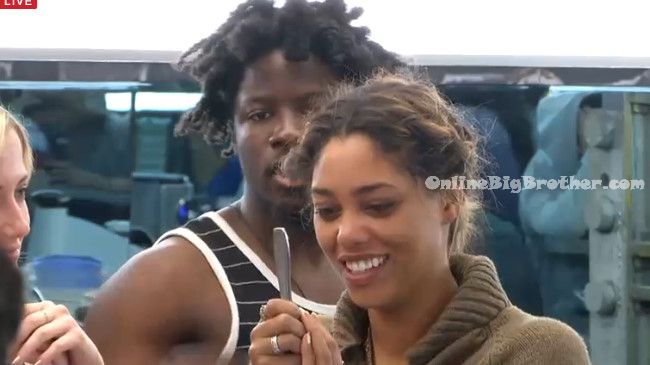 How is everyone voting? Do you want the POV that has to be used or double POV to replace both nominees?
I’m not sure which way to vote.

Not sure yet…Dawg, how exactly does the double veto option work? I know that the first option forces the veto to be used on one nominee…but is the second exactly like the first, except it forces both nominees to be replaced? Or does it replace the nominees before veto comp? Or does it add 2 more nominees to equal 4 on the block? Please clarify for me before I vote. Thanks!

I would think it just removes both nominees and forces the HOH to then have to nominate two other house guests. (Only 2 HGs on the block once its used) This puts the HOH is a bad spot having nominated 4 house guests that week.

O.K., I just read somewhere that supposedly option one will be a regular veto comp…that will force the winner to use the veto. And option two will be a veto comp…where there are two separate vetos up for grabs. That would mean that either veto winner can decided to use/not use their vetos. If this is true, say for example…Sarah and Johnny are on the block and Jordan and Zach get picked for veto comp. If Zach and Jordan win both vetos, they could each save Sarah and Johnny…or one could save one, or both decided not to use them. If they did both use them, Bruno would have to choose two nominees other than those four to replace them.

The that is really how the second option works than I am voting for that…as it will be very interesting to watch how it plays out.

I understood it as the first option makes it so the POV MUST be used, and for the second option IF used, replaces both nominees… but they can still opt not to use it at all.

Zach and Jordon need to be a little less obvious. Bruno is already onto Newport and letting others know. It won’t be long before the house realizes that they are downplaying their strengths and throwing comps to play the middle. They are going to end up having both sides coming after them to break it up.

I’m hoping that Bruno got DQ from this HOH, while I’m happy for a power shift again, winning a competition through the help of others is not really fair. Might as well have the entire house team up against the Bobby next week. If they would accept this kind of help maybe production would also accept it if they actively push someone in an endurance or physical challenge. What’s the difference eh? And it’s not as if the competition is tailored to be done as a pair or trio. Throwing a competition is one thing but actively helping another person win an HOH is unacceptable.

Enough with the twists and interference. How about a regular week with some actual structure? In other words, no assisting players in HOHs, no instant evictions or secret powers.

The only direction this season is that there is no direction, it’s a mess.

I agree, likely too many twists this early. BUT, what about last week when Britt was HOH? That got played out without a twist, imo. Or am I confused because they’re have been so many twists?