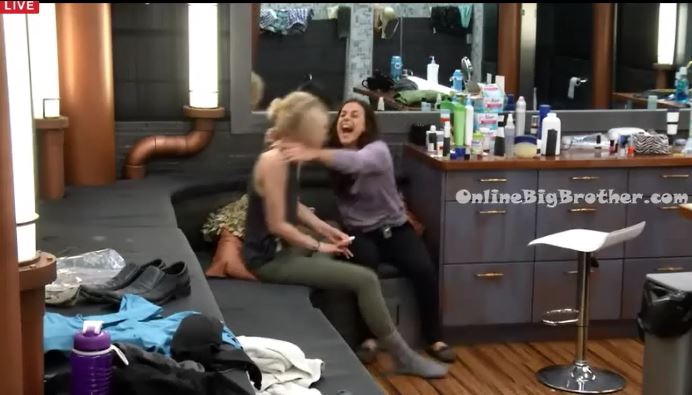 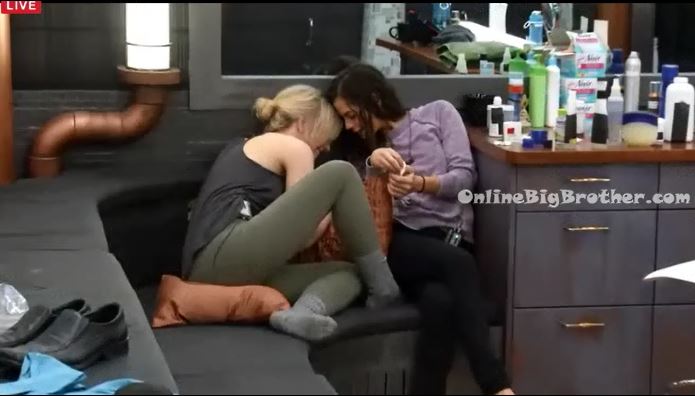 10:40am – 11:10am In the bathroom – Ashleigh tells Pilar that she will talk to her and tell her about Zach and her when she gets out. Pilar asks why what happened? Ashleigh says beacause. Pilar keeps pushing. Ashleigh motions behind a pillow what her and Zach did. Pilar gasps and jumps up. Ash tells her she can’t tell anyone!!! Pilar asks in the havenot room? Ash says yes. Pilar asks and last night? Ash says both. Pilar screams and hugs Ash. Ash says a good make out sess is fun! Pilar says obviously I like him (Kevin) but I need to keep telling myself it could end any time. I’m afraid of pushing it to the next level. Like we are on national television and I don’t want my mom to be like .. Ashleigh agrees. Pilar says I don’t know if he would go kiss somebody else. Sarah joins them. Ash talks about how when her and Zach were making out in the havenot room. Bobby said he could hear heavy breathing. Ash says we were just laughing and making out. Sarah says Bobby needs to mind his own business.

11:20am Sarah and Willow are in the bathroom. Willow comments that she was lying when she said the last guy she was with was 8.5″ She says it was funny to see the guys reaction. Sarah says I’m obviously going up right? Naeha walked out the door and I made myself transparent. Do they think I’m a manipulator? Willow says no. Willow tells her and Johnny to talk to Bruno. Pilar joins them. They tell Sarah to talk to Bruno and tell him what you can offer him. 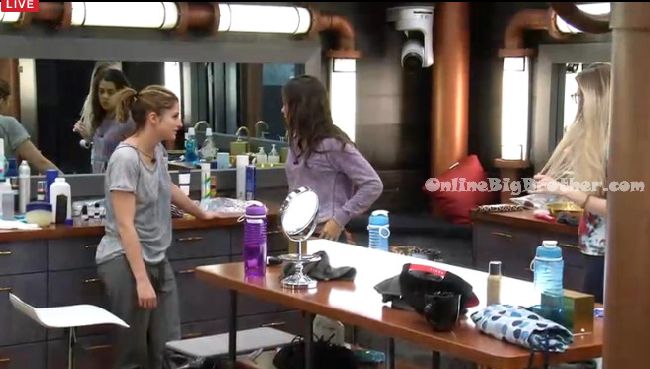 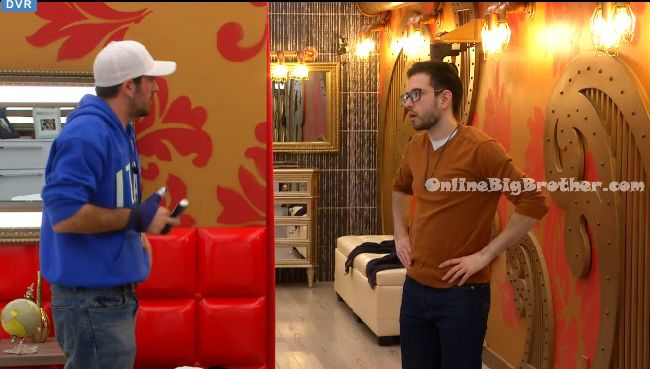 11:35am Big Brother blocks the live feeds.. When the live feeds return – Bruno picked the players for the havenots. Bruno comments that Zach’s team is stacked. Bruno says you have the slop pass so at least you’ll be eating. Bruno says it sucks for JP’s team, but Johnny has to go! Zach says I don’t even care. I’m not even nervous because I get to eat regardless. Everyone else is nervous. Bruno keeps telling Zach he has a stacked team.

Havenot teams: (I believe these are the teams ??)

Bruno is the host as he’s the head of household. It will be a blindfolded competition. (I think only one or two of the three are blindfolded) Havenot competition clue “Shocking” Willow thinks she’ll be blindfolded and have to walk through something trying to not get shocked or where she has to touch things that are shocking. 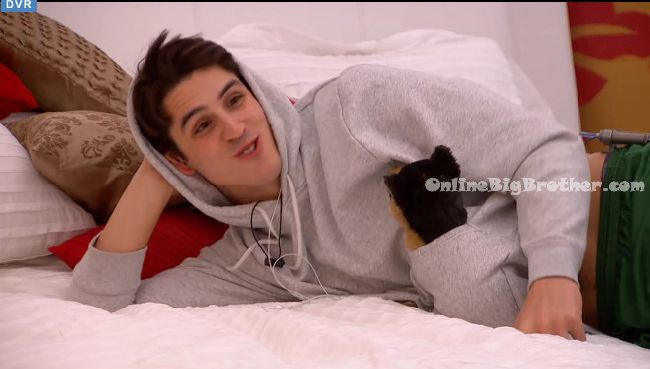 12:15pm In the bathroom – Johnny talks to Britt and Sarah. He says if I go up on the block and don’t win the veto I am going home. Britt says unless we change the target. Johnny asks how do we do that? Britt says its a long week. It’s not over till its over. Johnny says Canada’s Veto! I’d love one! Johnny says I know I’m in trouble, I know I have to win. Both Sarah and Johnny think they’re going to be nominated. Sarah tells Johnny she loves him. He says I love you too. They kiss. Sarah says I love Naeha to death but she blew up our games because she was so intense. 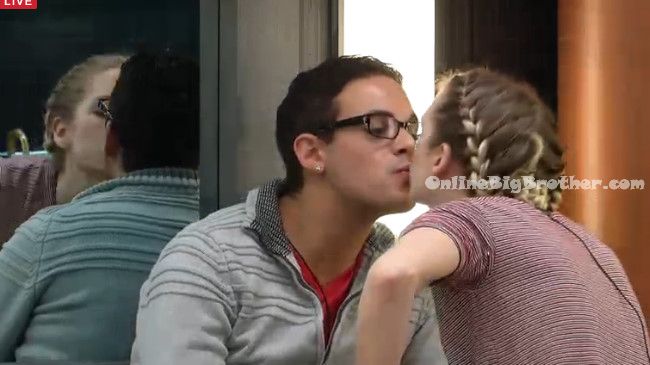 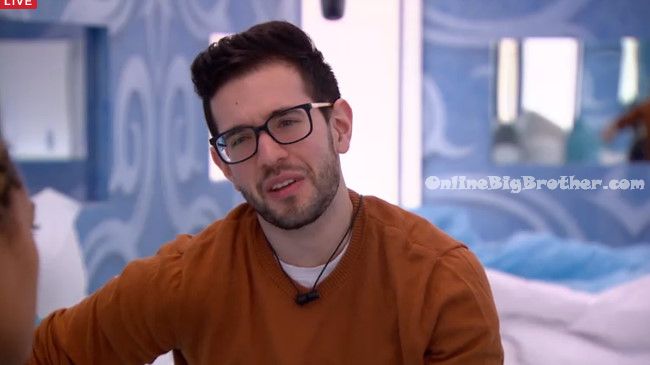 12:40pm – 1pm In the bedroom – Jordan is talking to Brittnee. As much as it sucks that he won it is going to show everyone how powerful he his. And we haven’t even done nominations yet. Brittnee comments on how Bruno is a Dad, has kids, is approachable. Jordan says this is his HOH. We just need to be careful and discrete. They talk about Bobby Britt says that Bobby’s game is weak. Jordan says its weak sauce. Britt says He thinks he has a charm about him, but it drives me crazy. I don’t find him attractive. Britt says that physically those guys have it but socially they don’t.

1:15pm UP in the HOH room – Willow talks about how her butt was bruised in the HOH competition last night. She says “It was spinning me and spreading my cheeks!” She then shows us her bruised butt. Photos of her bruised butt are here on our Tumblr site


1:30pm Big Brother calls Bruno to the diary room. All the house guests think the havenot competition might be starting soon since he’s the host.

Ashleigh sees Bobby sleeping on the floor. She goes over and spanks him. He doesn’t move and she runs to the bed.

2pm In the kitchen – Godfrey talks to Jordan, Kevin, Bruno and Sarah about how much of a shock it was when he first moved to Canada. He says the most shocking things was seeing all the infrastructure. He says even automatic doors were amazing to see because he had never seen that before. Canada is an awesome place.

How the fuck is Bobby supposed to “mind his business” when they are doing their activities in the Have Not room, where 2 other people are vacating in a close proximity? Pilar probably said the only smart thing, with Kevin potentially ending things any time.

I have a bad feeling about Kevin this week. I think if the double veto gets used, he’ll be on the block and gone. Bruno won’t want to “waste” his HOH on Britt. On the bright side……Kevin’s luck seems to be going from one extreme to the other, so he would probably win the comp to get back in the house.

I actually think the target is slowly turning towards Zach…not Kevin. Bruno wants to work with Kevin, so if Kevin gives him an opening, I think this double veto could end up with Zach going home. We’re not there yet, but i feel like Bruno is heading that way. I could be completely wrong obviously, and this could just be hopeful thinking on my part :)

with his and Johnny’s luck, they will be Brunos noms, the Canada veto will take both of them off block, and bruno will end up putting up Bobby & take advantage of getting him out. except i highly doubt bruno has any intention of taking bobby out unless everyone else in chop shop and otherwise tell him that is what they all want.

I simply want to ensure with a double veto used, that his preferred noms are taken down, because i think they will be Johnny and Sarah. And if Kevin is put up at all, he is unlikely to get voted out regardless of who is beside him. i’d like to see pilar or Willow out, i don’t see either of them adding anything other than votes

I am basing this on the BBCan3 blog recently posted which contradicts both what the vault vote states on the ballot and wat Arisa described on the show.

This is a clear example of why people should not be jumping to vote so quickly. It is unclear what they are voting on.

These guys always seem to know what’s happening with the twists before they’re even told (getting back in the house if evicted, the Canada veto)…I wouldn’t want to play BBCan just because of all the twists they have favoring whoever Canada is rooting for at the time. I’m still not over the Gary thing from season 1, sit in jury for a month and then go back to finish the game once it was down to the final 4? Yeah, too much BS to enjoy the game cuz it changes every week here in Canada, hard to root for anybody since production will twist things so the most popular gets further. Just rambling for a bit because I’m bored here at work :)

i don’t mind if there is a comeback out of the first 5 evicted, but i agree that the BBCAN1 was totally lame. No you don’t wait until jury or five left to bring someone back, that’s completely stupid. BBUS did it early on as well, and then there was a big HOH comp, along with the comeback comp, I don’t have a problem with that. Other than the one out first is totally a non event, no one in or out of the house knows them, or cares if they come back or not. They’ll be target number one, well anyone would be, but first out coming back in has zero cred or alliance. Naeha, Sindy or even Graig would have people to align with immediately, making the comeback game results that much more interesting.

All you Willow haters, special pix 4U on http://bigbrotherspoilers.tumblr.com/ – extremely kissable imo!

LOL .. And Yeah its a nasty bruise. Bad place to have it too, just sitting probably kills.

with sarah and jonny talking about exposing a bigger target, how long will it take them to figure expose Zach and Jordan and see if Bruno bites? realistically, after Zach’s coaching of sarah re. what to say to Bruno, if miss paranoia 2015 has any game at all she has to figure he’s trying to hide himself and bury her. I mean he’s saying this isn’t about this week, it’s about long haul. that’s fine for him, but short term it is sarah or jonny that are in the most danger.
not likely to happen of course, but why haven’t they (sarah, jonny, britt) figured out that two or three of their so called alliance are doing everything in their power to not be exposed, making their alliance look weak and ripe for the picking. and why isn’t this telling them anything?
is it just me that wouldn’t hesitate to sell out the supposed comp threat that can’t win a comp even with an advantage? that is even excluding my distaste for Zach as bb’s marketing goldenchild. if i’m in danger and one of my alliance is trying to convince me to keep them on the down low, while they haven’t been able to win anything for the alliance but were able to win a thousand dollars for themselves, i’d be putting them in the crosshairs before my next breath.

Frenchie
Reply to  another name

lol.
If “being in an alliance together” to you means we should all shout from the rooftops to the enemy who each of the alliance members are, then I don’t want to be in an alliance with you.

another name
Reply to  Frenchie

it’s true frenchie. I would not be a good candidate for an alliance. i’d sell them out to save my neck in a heartbeat. it isn’t a team sport, and if my alliance is saying take all the heat while we move one step closer to winning, all the more reason. if it makes me a target, so be it, as long as I make it one more week, i’m already a target anyway.

forgot to say something there: in blowing up my own alliance member’s game, and already being a target of the other alliance, I appear weak and powerless, as well as hated. sounds like the perfect person to take to final two.

Ashleigh is the new Allison, bland and just there to give HJs

I don’t want just one of the five coming back, let’s just trade them all for Ashleigh, Willow, Pilar and Godfrey. All of the evictees are way more interesting than those four.