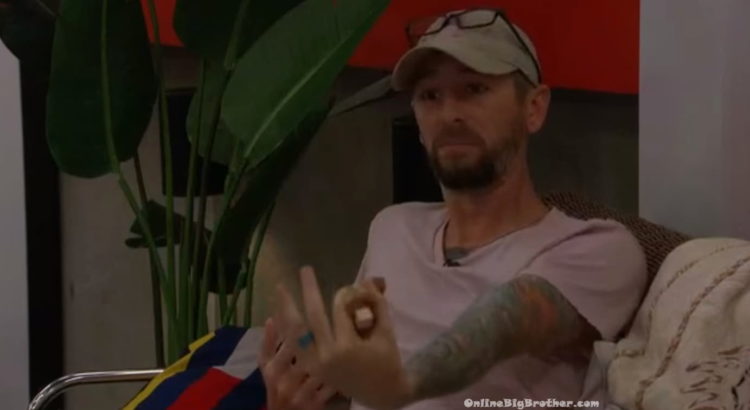 Big Brother Spoilers – Derekx did not use the power of veto. Frenchie is full sh1t. 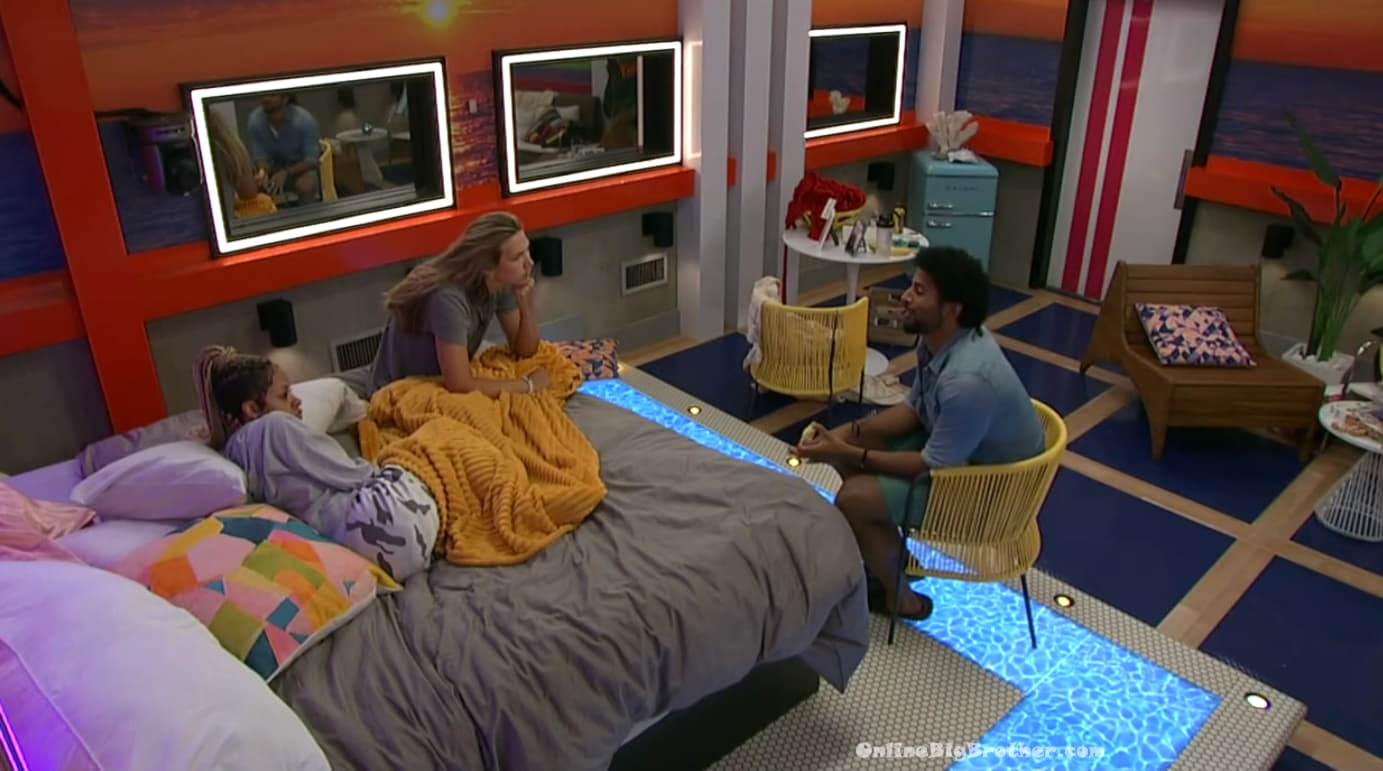 11:30 am Kyland, Claire, and Tiffany
Kyland saying he’s still trying to bring in Christian’s team. He points out that DerekX and Christian still don’t fully trust each other based on Things Frenchie was doing last week.
Kyland plans on running the same structured meetings before the POV ceremony. Sounds like it’s coming up soon.
They tell him how good of a job he’s doing

Tiffany – this is a great move for you. Your resume is looking really good. He’s the biggest target, not just the biggest target one of the biggest threats in this house.
Tiffany says sometimes people will like to keep a player like that in the game as a shield. “then that threat ends up sitting in the final 2”
Kyland – that’s been his pitch the whole time. .everyone will be after me
Tiff – Uhh huh .. and you’ll still be after everyone else making our lives a living hell
Claire – and Spreading rumors
Tiffany – I was thinking about it last week when he was HOH. WOW it’s going to be hell living in this house with him. The energy he carries around I like Frenchie I do he’s got moods that I like and he’s got moods I can’t live with you every day. You’ll suck the life energy out of this house He’s in one of those moods today 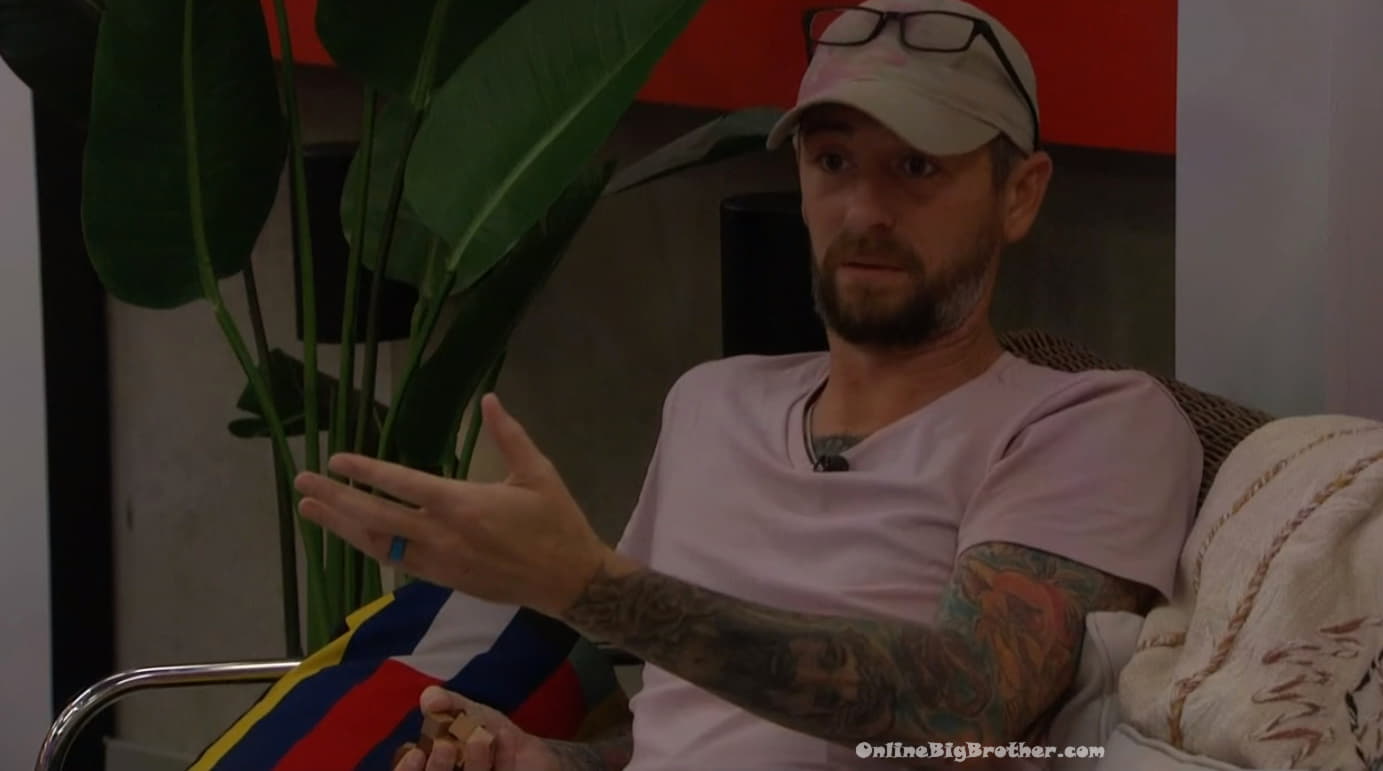 11:49 am Frenchie and Kyland
Frenchie – I don’t want people to feel sorry for me .. I woke up with such a migraine
Frenchie – I had a lot of fun fishing.. that was fun. You got to keep that up keep up the fishing..
Ky – what are you thinking?
Frenchie – If I had one last request
Ky – there’s still a lot of days not everything is set.. even if the ceremony is set the game isn’t set.
Frenchie – if I can reiterate one thing to you I do feel like we do have a good relationship and I have cared about you since day one..

Frenchie – if I am HOH you will never be a pawn we will talk together and work together as a team
Ky – that would have to be full trust thought
Frenchie – I would tell you I would look you in my eyes and tell you I’ll put on everything I love I’ll never put you up[ again
Frenchie – I let some family things get into the way of my thought process in the game I got fueled up and fired up and angry at something that had nothing to do with the game. that made me get angry towards the game and made me make some bad decisions.
Frenchie – am I wrong for that absolutely. I let something else get in the way and I was wrong for that.
Frenchie – I’m asking for a second chance.. like DerekX had
Frenchie – I’m just asking you for a second chance that’s it..
Kyland wants to know who cast the two votes.
Frenchie – I can tell you one.. I did make a promise I know it feel like the two votes are being hid.. I made a promise to those people and to me a promise is something I’ll always keep.
Ky – when you are talking about DerekX not being the target before the veto the last thing you told me and Travis was hey Travis you win the veto Kyland comes down DerekX goes up
Frenchie – I had my eyes set on Travis the whole time no matter what Derek wasn’t going up
Ky -what if Travis won?
Frenchie – I was going to sh12t my pants
Frenchie says he told the slaughterhouse that it was stupid to take out DerekX because he was loyal. The slaughterhouse was going to be pissed off at him and he’s ok with that.
Kyland calls him out for not telling him this earlier they had plenty of conversations before the veto last week.
Frenchie says he’s got zero votes right now. Says if he’s up against someone that’s a big player he can walk out to see Julie “with my head up high”
Feeds cut.. When we’re back..
Kyland says his first one on one was with Frenchie where Frenchie went on about how loyal he was and he had full trust
Kyland – most of the house from different teams come and say the opposite
Frenchie – full disclosure.. I didn’t want to say this.. please stop recording this I don’t want my son exploited.. I was going through something..
Feeds cut..

1:00 pm Feeds down for Veto Ceremony 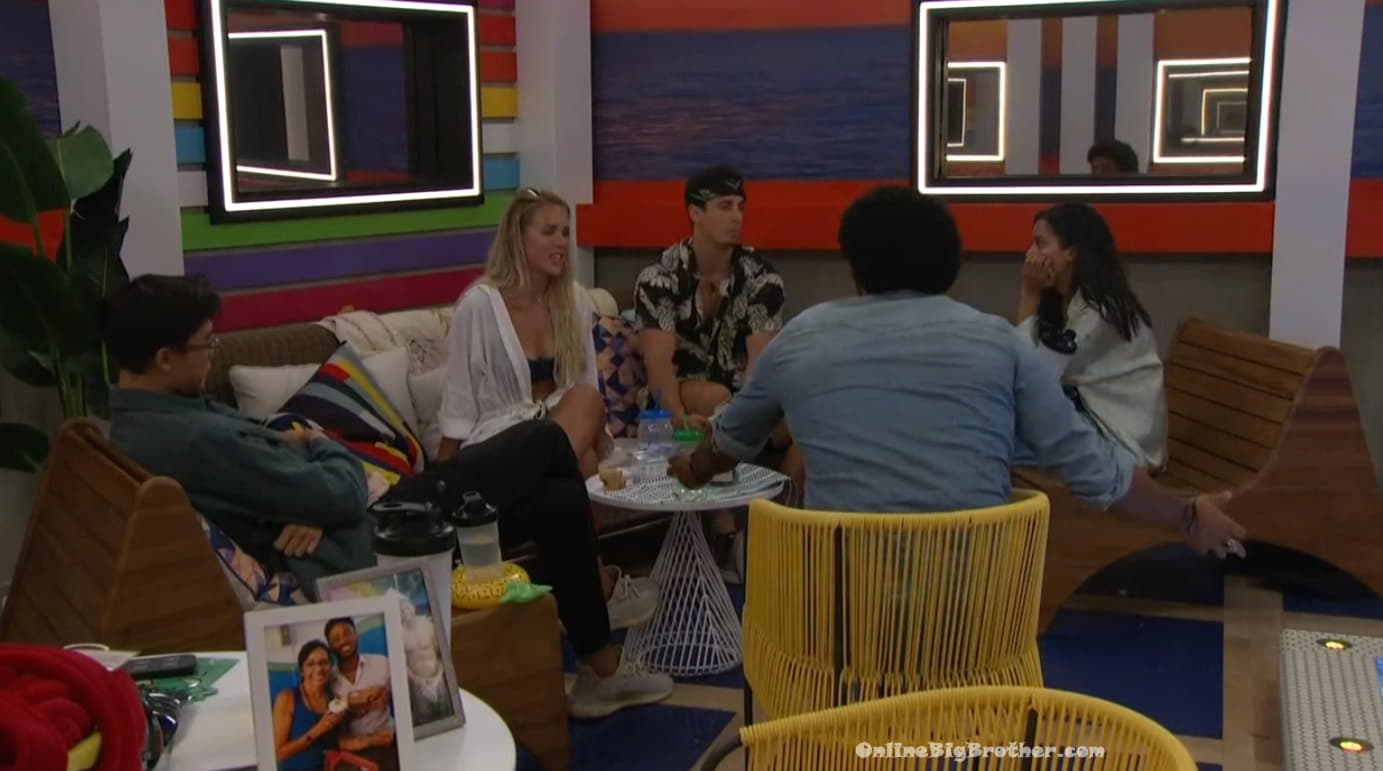 1:22 pm Hannah, Brent, Kyland, DerekX, and Whitney
Ky is having his meetings with the teams. Asks in terms of the vote do they all feel the same
Whitney – yup
Brent- I will be unbelievably surprised if it’s not unanimous
Ky says the meeting he wanted to have with all the teams before the Veto Ceremony is to make sure everyone is on the same page with the plan. (To get out Frenchie) He also wanted to get promises for safety next week

1:29 pm Frenchie is giving away his clothes while asking for people to give him their clothes and BB souvenirs to give for Charity
he gives Tiffany his red overalls

1:35 pm DX and Kyland
Kyland – we can try and go off words but have to go off action and me and you are the only two.. 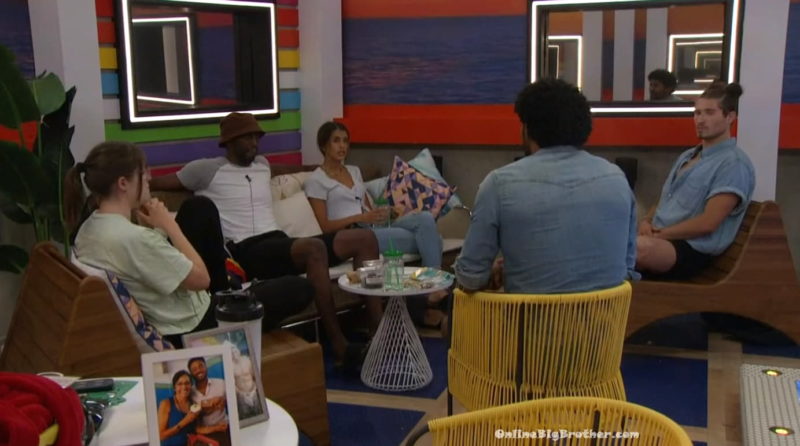 1:39 pm Team meeting 2 (SB, Alyssa, Xavier and Christian)
They offer Kyland and his team safety next week from their Team.


1:46 pm
Frenchie says there are two things he wants to do before leaving..
Tiff – Kiss me?
Tiffany “I don’t kiss married men unless they want to”
Frenchie says one thing is “Prank WArs” and for everyone to try “that fishing game”

Tiffany "I don't kiss married men unless they want to" #BB23 pic.twitter.com/ncLUVoeLgn

Whatever Frenchie was going to say before the feeds cut, I do hope it was the truth and not something that he asked the feeds to cut out because the lie could get him in trouble

He wasn’t lying. He had a son die shortly after being born in 2016.

Frenchie is gonna be sitting at home and still giving a speech to the HGs. His mouth hasn’t stopped from the moment he entered and it won’t stop when he leaves.

So far my #1 is Tiffany, she is dialed in and has a perfect read on the house. Now things can change as the weeks go by, but for now Tiffany is my favorite.

Given her social game so far, I agree

Hey OBB, have been reading your posts for years. My favorite parts are when you add your own personal sarcastic comments. I also love that you recap with a spoiler in some of your posts. Can you keep doing that? I don’t have the feeds nor the brain capacity to follow everything that is going on so I love your summaries! Thanks! :)

thanks Vikeschick68 nice to hear the feedback :)