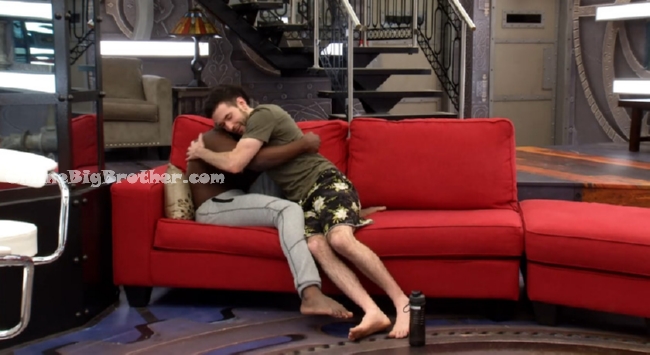 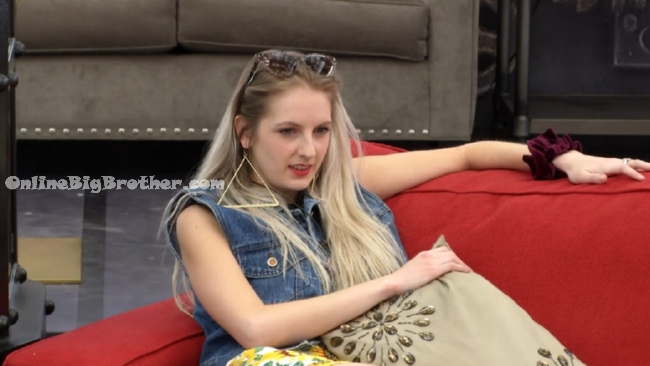 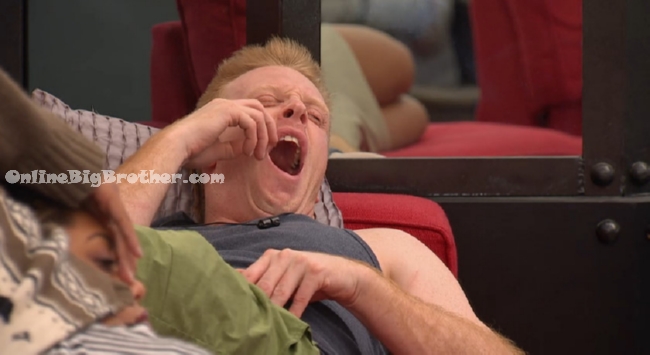 6:40pm Godfrey and jordan
Godfrey is telling a story about finding his grandfather dead He gets emotional and Kevin is there to comfort him. Godfrey was 13 when it happened. He was closer to his grandfather than his father. It happened right before he left for Boarding school.
Godfery starts to cry, jokes “There was something in my eye”

Pt2 is incomplete but another cam 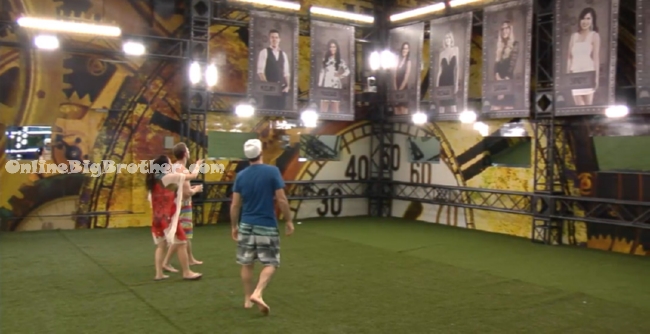 6:41pm Sindy tells Bruno and Bobby what Willow said about all there backyard photos. Willow told them she was a super fan and these were the super fans first impressions. They all laugh at the descriptions “She was bang on” 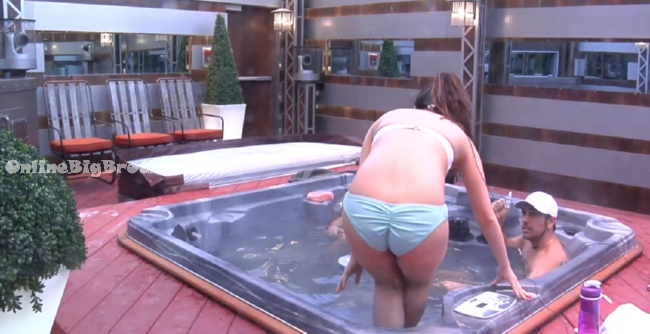 They head into the hot tub. Willow and Brittnee join them. Sindy is going on and on about how she mostly dates non Asian guys.

7:03pm They are told by Big Brother there will be a indoor lockdown in 15 minutes, 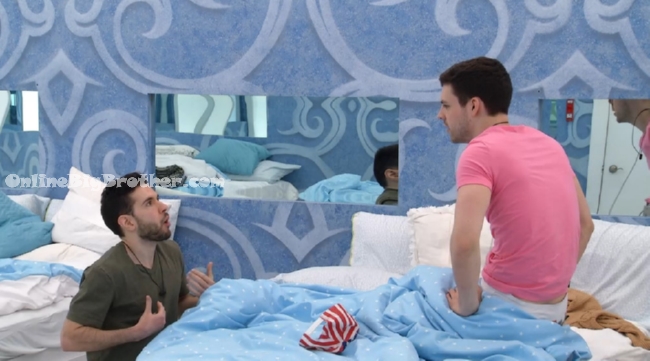 Jordan telling him that he was the target this week. Adds that Graig and Bruno are always together talking game so he thinks they are together. They agree that Graig is a “Piece of Sh1T” and they rip him all the time in the DR.
Jordan calls him a 12 year old.
Jordan suggests they “Expand” their alliance a bit.
Jordan says “Captain Canada” is standing right in the front as the target. Suggests they team up with Zach, maybe Willow and Johnny.
Kevin says h’s “Kinda close” with AShleigh she can join them. Jordan is worried a bit by Ashleigh because she’s so close to bobby.
Kevin says he never tells information to Zach. Jordan – “Neither do I”
Jordan says Zach has branched out a lot he’s good with Graig and Bruno. Jordan instruct he throws the HOH this coming week they don’t need it their safe.

Jordan says he kinda wants to keep Sindy around this week, “She’s useless she sucks and people are scared of her for no apparent reason”
Jordan – “We need BIG targets to surround the fortress”

Jordan – “I talked to Godfrey today made him cry.. He’ll be gone in a couple weeks”

I want someone to call out Graig i would love that, also i just want a fight to break out. Though it is still very early in the game.

this makes me wonder (with the conversation between kevin and jordan), is their alliance real on BOTH parts? cuz it always seemed to me that kevin was all in with the alliance, but jordan, not so really, but it seems like he actually wants to ally with jordan maybe?

I want Graig out of that house so bad you guys don’t even know. I really hope he’s targeted next week. Looks like a plan to evict Brittnee is set into place by “the fortress”. Keeping Sindy would be smart because she does talk a lot and will always be a target and Brittnee doesn’t have much to offer at the moment.

Who are the “available” folks? Any lovebugs yet?

Watch Graig announce that his sister is Taylor Swift. lmao

Hello Big Brother fans. I am Anela with an “A”. Sorry had to do that cause Sindy is bouncing on my last nerve with always saying her name and following it with an S. I want her gone ASAP. Just something about her I don’t like and don’t want her to win. But I have a feeling she will be this years Sabrina and will go right to the end cause maybe no one will give her the money. But still to early in the game. Still want her gone tho. Enjoy the season fans. And Simon and Dawg welcome back for yet another season. Simon I hope married life is treating you well.