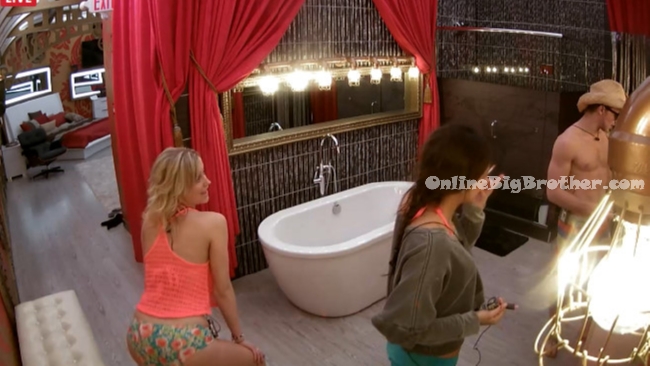 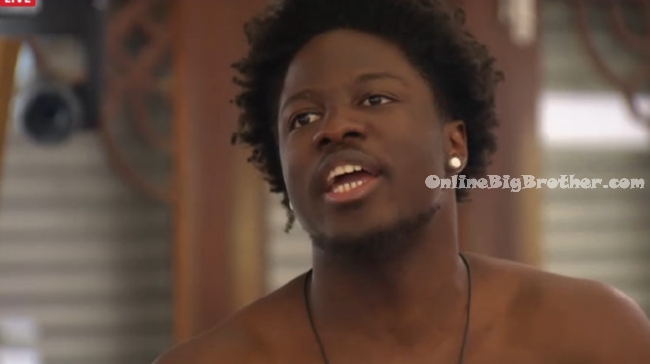 1:30pm – Big Brother blocked the live feeds. When they return, Graig, Godfrey and Bruno are talking about Willow being bothered about not being called in the diary room. Bobby says he tries to get in the diary room all the time and gets denied. I get the red light every time.

Zach and Willow are alone and talking. She says she’s better now. I just had to have my one break down and now I’m good. Willow asks Zach if he wins next week who he would put up. Or do you not want to win it? Zach says you never know what will happen so I would want to win it. Zach says we have a good thing with the Chop Shop. We can go far with it. We have to be careful though because if we all get to jury it will be an all out slug fest. Zach says that he feels Kevin would be more on his side than Johnny. Johnny is playing a smart game. No one can say he was talking about them because he’s very careful not to talk about anyone. Graig & Bobby join them and says all that stuff outside just makes us stronger. It brings us together. Jordan joins them. Willow asks you’re already for the pool party!? Jordan says yeah. They agree that it will happen tonight. (Sounds like the house guests had a task – Where they had to rate each other: Most / Least – Inteligent, Beautiful, etc.) Willow says she got upset because she was voted least on everything. Like least beautiful and Most annoying. 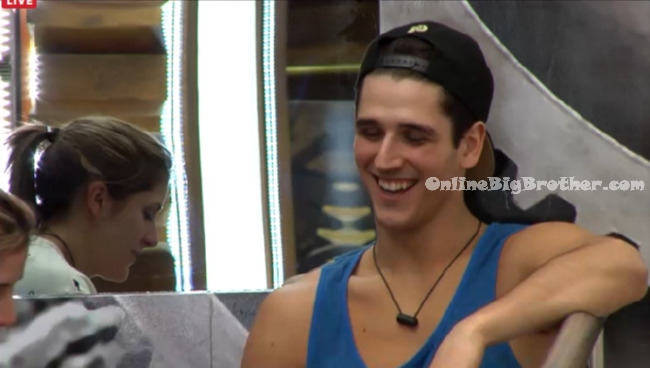 In the bedroom – The girls are getting their swimsuits on. They comment on the pool party they’re going to get soon. Ash says “Drinks and Making out!” No, not really my family is watching.

4:25pm The house guests notice the backyard door is opening and a bunch of them rush outside to see if the pool party is set up. When they get out into the backyard they realize nothing is set up. They figure it might still be later tonight.

Bobby and Bruno head out to the hot tub and start talking about how emotional Willow is. They comment on how she’s a nice girl. Bobby says he looks for a girl that’s goofy like Willow.

Naeha and Johnny talk game in the bedroom:

So who’s a fan of raving racist Sarah?

another name
Reply to  Antony G

you’re kidding right? she was raving against racism, not in favor of it.

You serious? Is your comment a joke or you just do not understand every word Sarah has been speaking. Honestly if the houseguests are smart they should really target Sarah this early on, as of now she’s playing the perfect under the radar game without angering the viewers because she’s not non existent, she’s basically playing but is not on everybody’s attention.

I don’t know why this season has me bored. Hopefully it will pick up in the coming weeks, but I kinda wish there was a Devin or Caleb to crazy it up lol.

But at the same this is Big Brother CANADA

It seriously blows my mind that Graig gets any girls at all. He is straight up repulsive!

He sure is… But (let’s face it) some women have no self respect.
Anyone who sleeps with that man-troll has no self worth. Lol

Bro Cindy is delusional if she really thinks she’s as pretty as she claims or thinks she is… I mean I know some REALLY attractive girls that know they’re pretty but are not obnoxious about it. For Cindy to say that she doesn’t hang out with ugly people is so ignorant to say and personally I think she is the least attractive girl in the house…

sorry Cindy… you are not pretty at all…..i hope she can wake up and see the mirror.