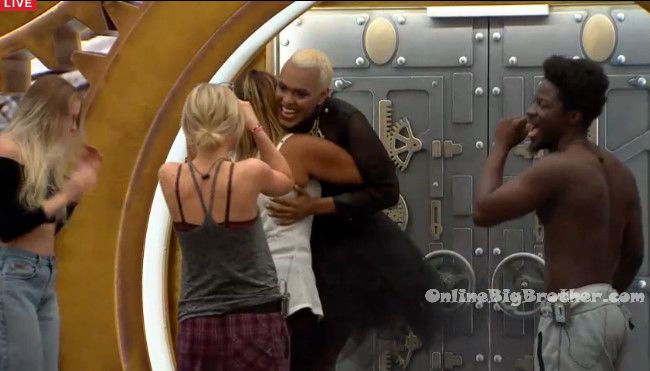 2:30pm The cameras focus on the front door. The door bell then rings and all the house guests jump up. The HOH room door is still locked and when Big Brother opens it the house guests rush to the front door. Gary enters the house and tells them he is here to style them for the Big Brother Awards show tonight! He tells them he’s not alone and has a friend with me. Sarah asks is it Neda!? TELL ME IT’S NEDA!!! The opens and Ika Wong from Big Brother Canada 2 enters the house. They head to the bathroom and wait for word from Big Brother. Godfrey says I thought Bruno was coming back YO! Big Brother radios Gary and they all head to the HOH room. In the HOH room – Big Brother has a clothing rack with awards show outfits for all of the house guests. Godfrey says I’ve never worn a tux before! Ika tells Godfrey that she’s been watching and tells him he needs help with his hair. Gary tells Ash he’ll start with her and pulls out a purple dress for her. Big Brother then blocks the feeds again.

Here is when Gary entered the house last season and here is the Awards Show they had in the backyard. 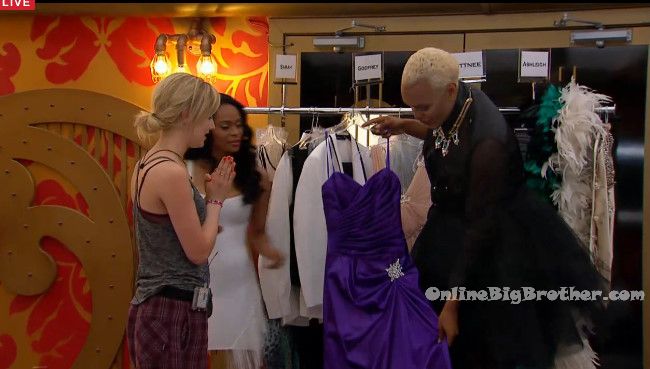 3 Weeks after BBCAN3 is over BB17 starts! we’ll be covering the feeds round the clock get your CBS All Access early and re-watch the past 16 seasons of the show.

Isn’t Neda the fashion stylist? Was she busy or something? Why Ika?

Uh, have you seen Ika? HOT DAYUM. That’s why.

SO HERE IS THE SCOOP!
i think the reason Neda the stylist wasn’t called is because of the beef with gary….apparently Neda was suppose to show up on the slideshow she wore a blue outfit production told her to change cause gary will be wearing blue costume,Neda being a good sport changed wore yellow …then production told her to change again because gary wants to wear yellow now….Neda tells production to go to hell she says ,”i am the guest …why are you guys doing this?!”….she then leave the studio and production calls anika as a replacement for said slide show.
HOW DO I KNOW THIS >>>
neda twitted about it …and the reason i belive neda ,is because bbcan gave a flimsy excuse they said they couldnt have neda because of scheduling conflict which was a lie because they adverstised her coming to the show for a week straight and she tweeted about coming.

They are fools and Gary is a diva. Neda is very respected in the BB community. I would rather watch Neda than Gary and Peter any day.

A lot of season 2 folks are in Edmonton for Adel’s wedding! Ika does hair!

Because BB likes to torture us too!
I can’t even watch the sideshow anymore except for
about 5 +/- minute interview with the guest.
Good for Neda for telling BB to shove it. She speaks for a lot of us I’m sure.
Even the weekly shows are getting so bad,
I now just pretty much only watch the second half now.

ikr? I can’t even watch the side show because of Gary! ENOUGH GARY!! Gary is sooooo annoying! Now his presence is affecting us viewers, and the BB show. ENOUGH!

Gary is the ONLY reason i watch the sideshow….his rants are hilarious…better then Peter’s wannabe wrestling ass. I can’t stand him!

I lied…he’s not the ONLY reason i watch it. I obviously like hearing what the evicted or past house guests from previous seasons have to say! Especially when they have Emmett or Jon on Ohh la la lol and Neda is one of my all time favourites as well.

But we’ll all be tuning in tonight for the entire hour just to see Zach vs Peter. As much as I think peters a douche, I’m salivating at the thought of him ripping Zach a new one. People on Twitter said it will not be a disappointment!

Neda a stylist!?!
BAHAHAHAHAHAHA!!!!
Have you seen her fugly ass Tshirts???
Child please! Ned’s makes Tvshirts! She has NO fashion sense

That purple dress looks like a 1980’s prom reject. They should have used Neda for this segment.

The Truth
Reply to  sunnydee

I don’t even think Gary or Ika have a say on the clothing selected. I think it’s someone on production. They are just there to “jeuge it up”.

Godfrey looked so embrassed when ika was talking about his hair haha how cute!

And I like Ashleys dress but not crazy on the colour.

Seems Neda and Gary cannot be in the room right now (her and Gary wanting to wear the same colour dress is apparently the reason she wasn’t on the Side Show).

Too bad because she is an ACTUAL stylist. Hahaha at Sarah hoping it was Neda.

Gary should have just gone in on his own! Neda or nobody!

Forget Gary. It should have just been Neda.

Gary entering the house when they’re down to the final 4 made me have a flashback of Season 1, I’m surprised BBCAN didn’t make him the HOH this week.

Gary is so freakin tall! Ika can be a bit much but I luv her! LOL@ her comment about Godfrey. His sister tried to help him too.

LOL Zeenie….good one and so true.

I honestly want godfrey in final 2 and see how speech is. Everyone in the jury house will second guess godfrey because he got a less threat in pili instead of him.

I’ve never seen the BBCan awards, does Arisa host? It would be funny if Sindy hosted, or at least presented.

i think Neda’s true reason for being with Jon will come out very shortly. Jon’s reign as winner will be over. No more special appearances or being the center of attention. i honestly think she thought she would be getting her own show or they would replace peter or gary with her on the side show. Sabrina..know one ever hears anything about Sabrina, why..bb didn’t even invite her to be on the side show..why..Sure Sabrina was a hateful bitch for saying some of the things she said but she did make great tv and live feeds were much more interesting with her than the boring cast this year. So why did every cast member from last year abandon her..why neda of course….no one wanted to offend the reigning king and queen . i do hope neda is sent to the sidelines i would like to see more of sabrina and i do hope the big brother family does welcome her back to the fold.. Why even the blonde one that was such a racist bitch in bb15 is invited to big brother events….so lets see what happens between jon and neda this year and how events unfold….as you can tell i never did and never will like neda.

Yep
Reply to  To the Curb

Neda is overrated, to the extreme!

Neda is not a real stylist and is overrated. Gary sucks! I hope to see Sarah or Brittney win this season.

Ika was visiting huh? Sooooooo glad I was working and missed it.
I do not like Ika at all, she is nasty, nasty, nasty.

Gary is pretty much working for the prize money he lost in season one. No wonder he’s everywhere, BBCan is trying to compensate.