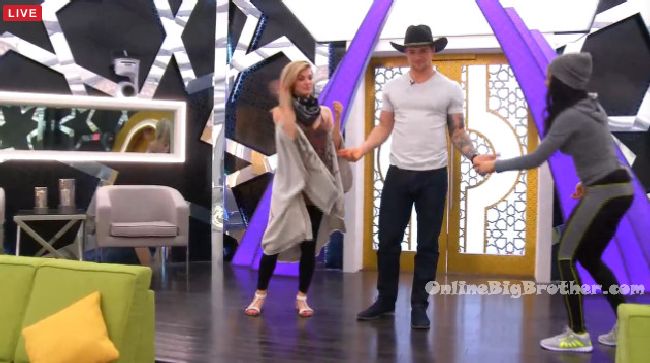 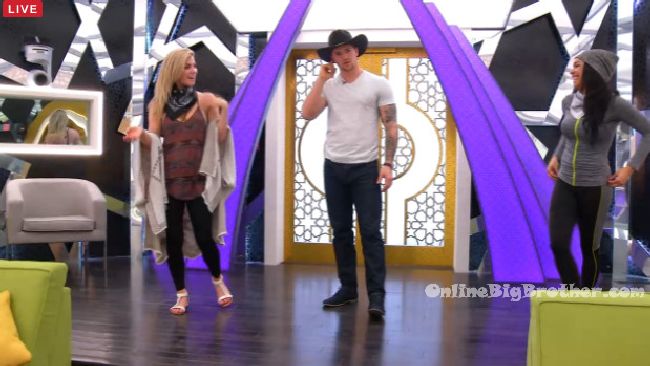 6pm Emmett Blois (Big Brother Canada 1), Loveita and Kelsey are in the house. Loveita and Kelsey have poker chips that they have to hide around the house. Loveita has black poker chips and Kelsey has white poker chips. Emmett comments on some of their hiding spots asking them if they want to lose this competition. They have 10 minutes to hide all their poker chips. Emmett is instructing them to hide them really well under and in things to make the house guests have to tear the house a part. Emmett tells them not to saturate one spot, spread them all over the house. Emmett tells them time is up. Emmett comments on how neither of them sabotaged the other. He says I would have been going around throwing the other persons chips out in the open if I found them. Maybe that’s what a week in the house together did. (Living together brought them closer together.) 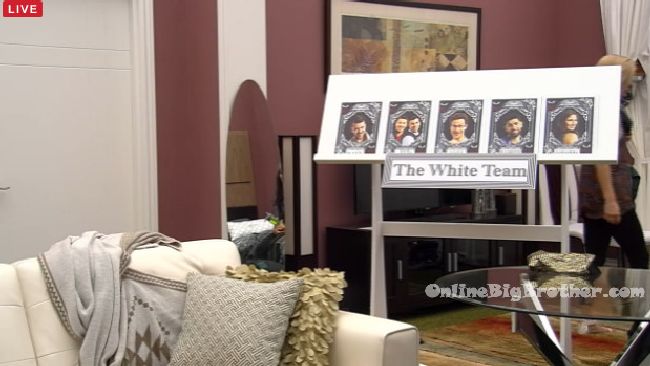 Kelsey says what if the losing team that doesn’t get the pizza party has to clean up the house. (It sounds like this is just like Arisa had said that the two of them would get to influence the house in some way. The winning team gets a party and the losers likely have to clean up the destroyed house.) 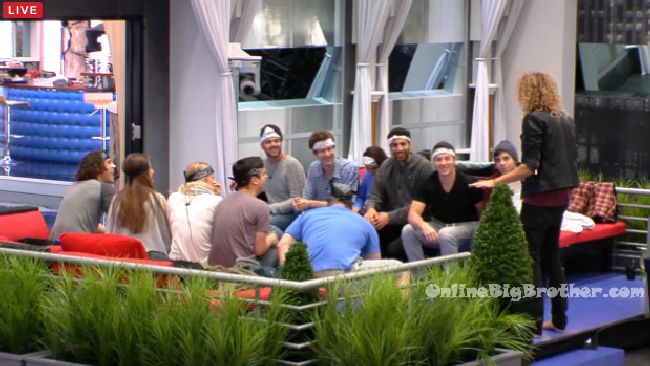 7:10pm The live feeds come back on and Tim unleashes the two teams into the house to find the poker chips. The house guests race around the house ripping it a part. Tim says there’s 100 chips in the house! Tim says that chips are only counted if they’re dropped off before the time runs out. They’re no good in your pocket. AND DON’T MESS UP MY HOH ROOM! Phil says he found a goldmine. He drops off 2 poker chips. Tim laughs. Tim says Dallas has his hands dirty! I don’t want to know where he found that one! It’s alright to make a mess!! You want to win this reward!!! Trust me!! And you don’t want to lose .. and suffer the PUNISHMENT!!!! You’ve got two minutes!! Clocks ticking!! You’ve got to get animal!! Tear it a part!! 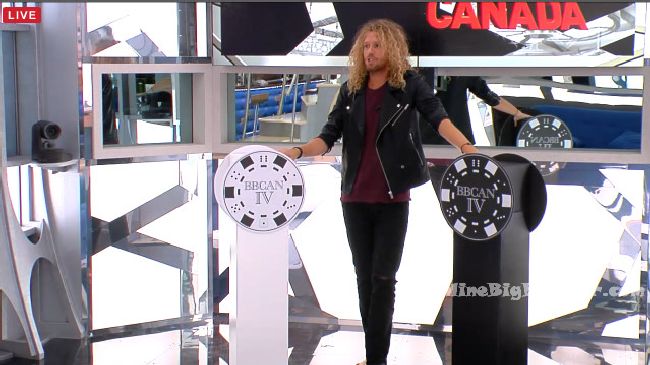 7:30pm The time runs out and all the house guests gather in the living room. They all comment on how the house is destroyed! Big Brother then blocks the feeds.

Results of the Poker Chip Competition

The white team (Raul, Nick/Phil, Joel, Ramsey Cassandra) won with 46 vs the black teams (Nikki, Jared, Dallas, Mitch, Maddy) 36 chips.
The White team wins a cocktail party and the Black team has to clean up.

It’s only season 4 and the past 3 seasons have all brought back a previous seasons houseguest in one way or another. Do past BBCannot players have a life or are the producers that desperate every season to bring back losers from the past?

Maybe they are building hype for an all stars down the road? Maybe these old house guests are better then the current ones? Maybe if you don’t like it, stop watching…..

Emmett’s businesses are the type to give him more free time in the winter. We should all be so lucky.

Emmett it is yummy! LOL and he is in way better shape than he was last year when he was on Big Brother after show……
But anyway LOL I read that they do there summer job and in the fall / winter they have a corn maze and haunted house. That is a lot of work to do! I do think he has a very good life, owning your own business and it being successful is a good thing! Lucky guy! And Julian is still teaching :-) and I read a interview with her recently and she has yet to touch her winnings! Maybe she has purchased furniture and whatnot with her brick card since she moved in with Emmett but her $100 Grand has not been touched! Good for her! I love them both :-)

White team found more of Kelsey’s chips than black team found of Loveita’s chips.
I’ve seen questions on twitter whether this has anything to do with the returning house guest. Probably not, but does lead to the question why did Emmett say you don’t want to throw this comp?

The thing is that Emmet said hide them really well. Why would he want them to hide them well if its not to their benefit ? Maybe the team that found less would be more beneficial to the fake evicted ?

Would be a pretty stupid way to determine who gets to return.

It should be based on some sort of comp / skill / or Canada vote.

Things that could shake up the house.
Jared thinks Raul is being weird to him. Asked Mitch who he wanted their third wheel to be.
Jared told Raul that as soon as Dallas’s side is gone, Mitch is the next target. Mitch and Raul have a final two alliance.
Cassandra tells the brothers Maddy and Ramsey are after both her and the brothers. Why isn’t that important to Tim? Why is protecting Jared from Dallas better for the four of them when Maddy and Ramsey are after two of their foursome.

Was the object for Kelsey and Loveita to hide them better so less of their chips were found?
If that’s true, What does Loveita get for less of her chips being found? So Loveita’s team gets punished, but does she get rewarded for hiding chips better is my question.

Production might not be very happy. ….. See Love had more chips still hidden which I would suggest means she won. If production wants Kelsey they’ll need another comp…. LOL

I’d think production would want Love to return because she was more interesting and would add tension to the house if she returned. Kelsey would just go back to Jared, Love would defenitely have to fight

It makes me laugh a little that the guy with a little bit of a history of being a sore loser in comps (twice so far) is cleaning the room while everyone is sitting there dressed up for their party.

I think Raul contaminated all the food after touching the garbage. Touches garbage then touches the food in the fridge. Yuck!

plus what ya really mean lol

Emmett speaking to the houseguests at the party was a little hypocritical. He said you have to be try not to be bitter in jury.
How bitter was he when he voted?
Yes it was almost immediately after he was evicted, but him talking about not being bitter in jury is a little odd.

it’s probably just a fun comp, for tv, rather than whoever hid the chips the best gets back in the house. Emmett is implying that hiding the chips so they can’t be found (as in you don’t want to throw this one) is a good thing. The teams win if they find more, but that means whoever hid them lost as in the team ‘beat’ the hider.

which means Loveita hid her chips the best, hiding them from the team trying to find them, so if there is a prize for that she gets it? in any case, that is how i would interpret it. if the hider was supposed to get their team to find them easily then i guess Kelsey won that one judging by how easily Raul found like 10-12 all in one spot.

in BBUS when they do this kind of comp, they tend to throw all the food out, knowing people’s hands have been sifting thru the cereal, and sugar