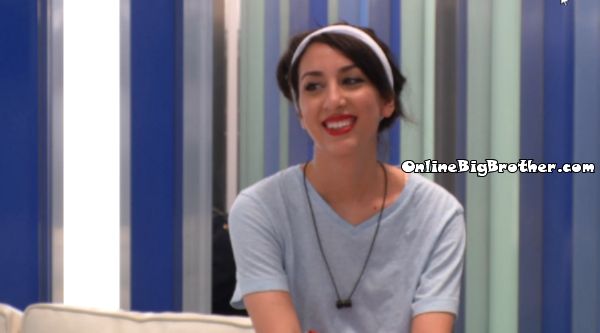 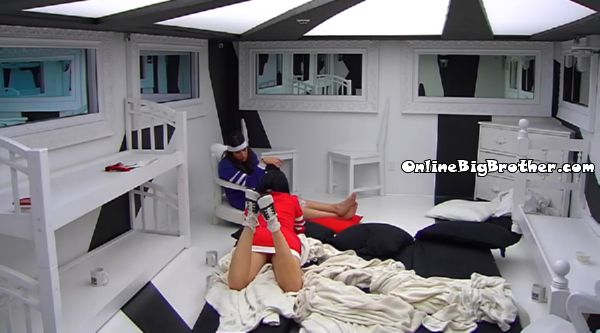 6:37pm Have not Sabrina and Rachelle

Sabrina is saying she’s not thinking JOn is listening to their idea of putting Arlie and Alison up she thinks they house wants her gone.

Rachelle say Jon is being so stupid.

Sabrina tries to be optimistic says they never know what will happen.
Sabrina says she’s not going to start asking people for votes, “If we’re both on the block one of us is going home”

Arlie moons the frat party from the inside

They keep commenting on how there is no food in for their party. There’s plenty of beer though. Jon find a novel (Presumed innocent) for them to read.
Adel – This party sucks
Sabrina wants to read the book to the group. She starts reading but nobody really listens.

Sabrina says she thinks Arlie looks so hot in his have nots outfit. She wants to change her choices of who the two guys she would marry in the big brother house from Kenny/Jon to Arlie/Jon.

Jon wonders if it’s because Kenny is gay..

Adel asks Big Brother if he can go inside and make them some food they are hungry. Big Brother doesn’t answer. Allison says she’s going to get smashed with all this alcohol and no food.

Jon and Allison are on the couch pounding drinks , Sabrina and Adel are playing ping pong.
Allison says she’s getting wasted, Adel tells them they need to pick up their ping pong games cause he’s wants a “GOOD” match. (Adel is really good at ping pong)

Allison tells Jon if he gets a Pandora’s box he should open it. Jon isn’t sure thinks there might be something that will ruin his game. Allison say it never ruins your game it’s usually is a fun thing. (Pandora’s box will f*** your game for real)

Jon yells out asking Arlie to throw in a pizza for them.

While Adel and Sabrian play ping pong they briefly talk about Kenny and how there was no sign that he was gay.

Jon and Allison crack some more beers and set up to play beer pong. Jon throws the ball and gets in in. Allison – “AHH I wasn’t ready to blow” (They try to blow the ping pong ball so it doesn’t land into the cup)
Jon – “You should always be ready to blow”

While they play beer pong Allison starts to impersonate Jon dancing last night, Jon – “Ya I was drunk last night”

Allison – “I’m so drunk” Allison calls Jon out for not drinking enough, “Don’t make me the only drunk one” 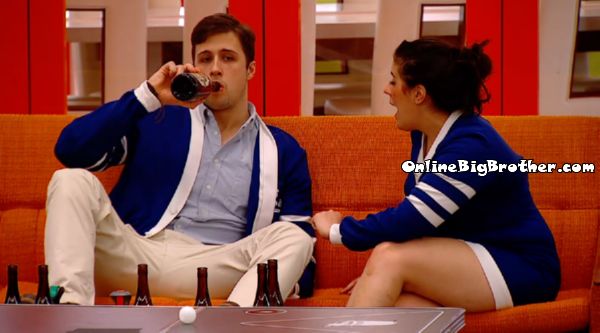 7:33pm Jon and Sabrina
Sabrina says Sarah was the one spreading all the lies to her about JOn and it twisted things for her.
Jon tells her there was no plan to get Sarah out the plan was Kenny. Jon adds that Arlie and him gave Sarah every opportunity to join them but she didn’t.

Sabrina – “so you were leaving me on my own.. thanks I can’t wait until you watch the show”
Jon – “1 Hundo”

Sabrina goes on and on about how it was Kenny and Sabrina spreading the lies about Jon and corrupting her opinion of him.

Camera flips to the ping pong game between Allison and Adel. Adel keeps telling Allison they have to drink up because they don’t want to have it go to waste Big Brother won’t let them bring it into the house.

They start talking about Andrew. Allison say he’s a pretty cool guy and she likes him and would want to continue something when she is out of the hose.

Allison mention that when she came into the game she latched onto Andrew right away.
Adel says that was a smart game move
Allison isn’t sure say she’s still trying to shake off her relationship with Andrew.
Allison tells him if he ever heard she was after him it’s because she was brainwashed by the other side.
Adel tells her not to sweat it he doesn’t hold anything against people.
Allison tells him Adel was loyal through the entire game.
Adel knows says it’s the only reason why he’s left.
Allison feels bad because she turned on her alliance after Andrew left. 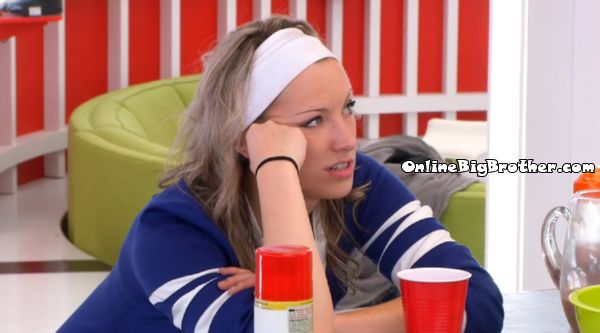 7:52pm Party is over. Allison, Arlie and Jon in the Kitchen
Talking about Sabrina trying to talk Jon into doing not putting her up and joining the gremlins. Arlie sarcastically says “Ya Jon throw your entire game away”
While in the bathroom Sabrina tells Rachelle “I think we’re good”

Allison says she’s on board with getting out Sabrian this week, She does like Sab as a person but she has the feeling Sab will be a bitter person when the show is over.

Allison is terrified one of them will not get HOH next week because so many of their side is on slop and Sabrain might win HOH and put up Alrie and her.

Arlie isn’t worried about Sabrina winning the HOH he points out every time Sabrina had to win a HOH or POV when her life was on the line she froze under pressure.

Allison and Arlie agree that Jon is “Dipping his toes” everywhere. Allison points out regardless of what Jon says he is not going to turn his back on Neda.

Allison – “I don’t know where Deli lies.. I know you are close to him”

8:06pm HOH Neda and Jon
They briefly talk about Jon telling people neda hid the sugar, Neda is still made because of the damage it did to her game. Jon Apologizes again for it.
Jon swear to her on everything on his life he will never turn on NEda
Jon – “Neda you are the only person I care about in this house.. genuinely care about”
Jon – “I will f*** my game to campaign to keep you here.. I’m telling you right now I would 100%”
Jon tells her if they are not life long friends they he will be rattled

Heather joins them asks how was Sabrina’s talk outside. Jon moans says she offered him Rachelle and her as puppets all season.
Jon – Apparently Sarah said a bunch of sh!t about me.

I take it back frat party is over i’m not on Team Allison anymore. ;)

How come did you start liking her in the first place??

What was it – the under-the-breath exchange between her and Jon? The fact that someone says they’re ‘brainwashed’ really makes them look they’re mentally incapacitated and Jon should not be buying that crap. She’s a sly one.

I’m over Allison. I wanted Nate to be the one to come in the house, anyway.

No Nose Pickers
Reply to  Simon

Simon
Reply to  No Nose Pickers

I really hope Sabrina goes before Rachelle. I’m not a fan of RoRo but I would like to see what she is like without her puppet master.

i thought Sabrina would of been gone by now.

Yes – and when you go over 100% you’re going into negative numbers which is bullsh*t.

“Hundo” is also getting a bit overused!

Never trust a hockey player who doesn’t give 110% a Hundo% of the time!

That was quick Simon. She’s not Miss Right – Miss Right Now.
On another note – that Sabrina is just a hoot and livens up any room.

When men and women do exactly the same job with exactly the same qualifications and experience, it has been proved comprehensively that they both earn the same. Neda doesn’t know what she’s talking about.

A
Reply to  AntonyG

What??????? I am not a feminist by any means but that is ludicrous. Females still make substantially less then men while in the same position. It has been proved comprehensively that they both do NOT make the same.

you are “1 hundo” percent wrong.

That is completely false! Ha!

Kenny is not in jury. He’s out giving interviews and he’s talking about all the things he found out now that he has left.

I pointed that fact out last night after the sideshow. Kenny was going to due media. That means in my view Canada will get at least 1 jury vote. Very shortly we will learn if we alone will decide the winner. Which is 1 Hundo a bad idea. It seemed Kenny knew it by the way. He was talking about seeing his friends back in Montreal. Couldn’t due that just yet if he was on the jury.

Looks like this is finally the week that Sabrina gets out!
I just hope they stick to the plan of getting rid of Rachelle right after. Both of those are truly mean girls who do not deserve to last in the game longer than the likes of Heather/Allison.

Not an Allison fan but at least she’s respectful and to my knowledge hasnt said anything mean.

How strange that none of them are in jury yet. There are only 8 people left, so I guess Canada is one jury vote. I was kind of hoping that Nate and Scott would get to be jury members, but I guess they are both out in the world now. I really wish we had voted Nate in the house, Allison just doesn’t deserve that we voted her in.

I do not think that Jon will win this game. He just doesn’t seem to be able to think strategically and look at what is best for his game. Look at the jury, neither Rachelle nor Sabrina will have the votes to win this game. His real threats are the wild cards in his own alliance right now, and that is who he should be really watching. I’m not saying Ro and Sabs don’t need to go, I just think he needs to be more open to other options.

Hey Simon and Dawg, just wondering if you have heard anyone talking about the 1 vote against Sabrina. I still can’t figure out why Ro would vote against her. I thought maybe she was done with being Sab’s lap dog, but on the feeds she looks as submissive as ever. Have the others discussed where that hinky vote came from, because I doubt anyone would suspect it was Ro, so if I was in that alliance I would be wanted to find out who flipped their vote.

Haven’t heard it talked about…

Jon is seriously gormless. He wants to keep the HoH winning endurance comp girl in the game when an endurance comp is probably about to happen. Rachelle wins the next HoH and she put up Jon and Arlie, The perplexed look on their idiot faces will be truly a joy to see.

Some real truth here. F7/F6 we should indeed see an endurance HOH comp plus the usual 1st part of the 3 part final If it’s purely strategy Roro needs to go now at F8. Allison needs to go before F4 but most importantly before F3. Jon and Arlie are nuts even discussing taking Allison F3. Neda’s small body mass might make her a good endurance comp threat. She’s tanked most of the season :P Notice Arlie in the POV comp last night! He can move when he isn’t tanking.