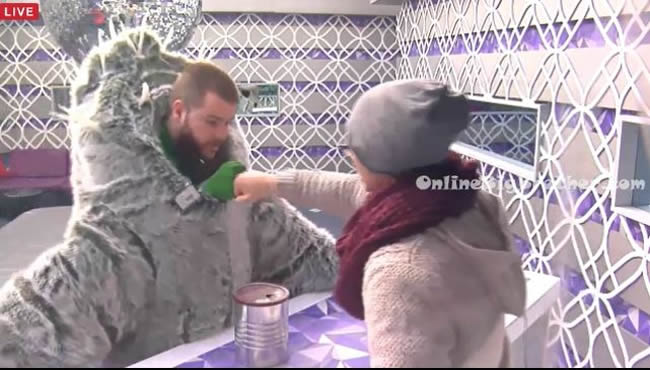 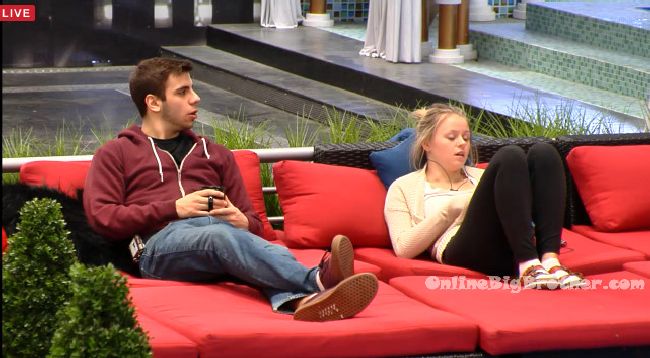 8:30am Big Brother wakes up the house guests. Ramsey says there are rats in the house. Loveita says make sure when you are paranoid you touch base with me. I like how Dallas is playing. I’m not being secret who I am playing with. Ramsey says out in the open.

Backyard – Maddy says people think Jared and Kelsey are the couple to break up. They’re (Tim & Cassandra) the next ones. Nick says I think we are by far the less annoying couple of the season. Good job.

9:10am – 9:20am Hot Tub room – Dallas suggests he and Jared talk later. Jared asks do you want to talk now? Dallas says here is what I think and its the honest to god truth. I think we should focus on the brothers. Jared says its a whole new week. Dallas says I would rather have you in the house. Jared says I’m on board it just depends on who’s in power. Dallas says if Raul or Kelsey were in power I know I would be on the block. Dallas says I would put up the brothers and a pawn to make sure they go home. Verses putting you up. Jared says its just difficult because everyone has blatantly called me out so it is going to be a huge move for us. Dallas says but we can convince them there’s two of them. Jared says I’m not going to commit to it, but I’m very open to it. Dallas says I won’t be on board till you’re on board. The offer is there. Those brother are going to get a free pass. Jared says that’s why they’re sitting back and asking so you and Dallas don’t like each other. Dallas says its a good diversion, man! Jared says they’re sitting pretty. Dallas says those f**king two they’re going to be inseparable. They had a bond outside of the house. Jared says its perfect. They’re laughing at us. Dallas agrees. Its a good diversion. Lets get them out and then talk again. Jared says until we smarten up, they’re laughing at us. Dallas says there’s a twist! Do you think they gave us all the twists in the first two weeks? No way man.

Tim says he wasn’t sure if Cassandra wanted to work with him or keep him on a short leash. Cassandra says you’re my friend not my pet.

9:55am The house guests are waiting around for the power of veto ceremony to happen this morning.

10am Big Brother blocks the feeds for the power of veto ceremony..

Well now I know why Cass spent so much time with Dallas yesterday. After Jared said he was going to vote Kelsey out because she flirts with the brothers, she went out with Dallas for hours. She put the bug in Dallas’s ear about getting the brothers out so she and Tim could get a final 4 with Jared and Kelsey. If Jared falls for this he deserves the end result. He will have lost the brothers on his side and then Dallas’s side will have the majority of the votes. Good move for Dallas, but not for Jared.

Now we are talking, Dallas and Jared, powerhouse.
Get Joel and Ramsey a well pumped up and rounded alliance.
Physical, Mental and decent Social.
They would dominate.

A Dallas and Jared powerhouse would last about a week and then they would be taking shots at one another. They each would be running around peeing on the furniture to show who was alpha male. Wouldn’t work. Both want free reign in the house, and the only thing stopping them is each other

So I have this little voice in my head in the “things are not what they seem” twist! Does anyone remember when (early on in week 2 I believe) Kelsey made a statement something like they have no idea how production works (or something similar to that) and the feeds cut her off? So now we have a DE twist when she is on the block so here is what I am thinking! (and it is only a gut feeling or guess) Does anybody think that perhaps Kelsey is a production plant, and possibly even works for BB? Something is just not adding up with her and how she acts! I truly believe her outlandish personality is exactly that an act! Just a thought! lol

Hann
Reply to  Caren in Canada

A plant how? And for what purpose?

If anyone is “outlandish” it’s Loveita. I’d think she or Cassandra were saboteurs if I was in the house.