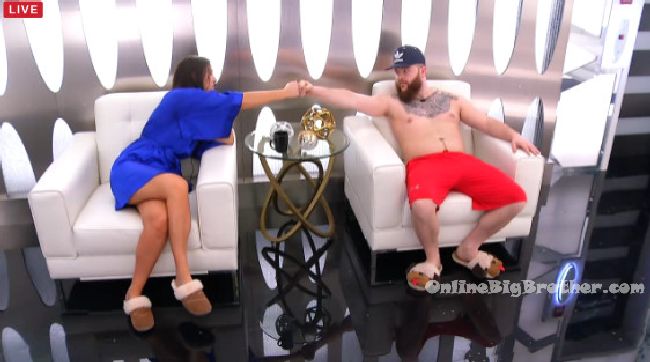 11am By the High Roller Room – Dallas and Jared are talking. Dallas says I exposed Ramsey and them so its clear that they’re going to go up. People are looking at me with some funny looks. Jared says Yeah I know. They’re good right now but later on they won’t be. Dallas says that he is gunning for this one harder than any other one. Nick already won one competition and he made it look pretty easy. I’m going to show you more trust. Jared says everyone else is weary but we shook hands and I’m good. Dallas says for me and you we’re good. They fist bump and jared leaves. 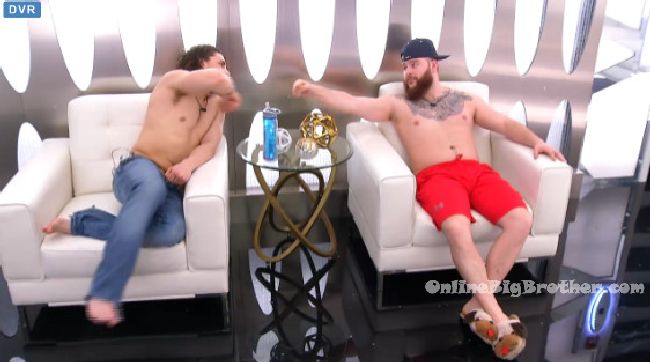 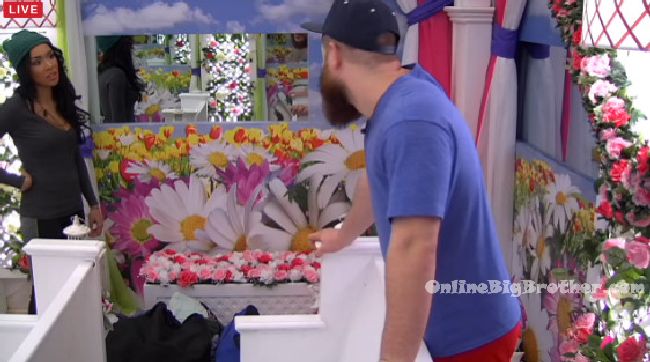 12:35pm Havenot room – Dallas says its not in people’s best interest to send you home. I am 90% sure that Sharry’s out that door. I don’t know where Mitch is at. You have 5 votes for sure. Loveita says I would be just as happy for Sharry to stay. It doesn’t even feel like a competition, you know because she’s my best friend. If she gets to stay then I’m happy for her.

Cassandra tells Loveita that she’s got her back. Loveita says I know. Loveita heads out of the bedroom and talks to Sharry. Loveita and Sharry say goodbye and say they’ll be friends inside and outside of the house. Sharry says I don’t know what’s going to happen. Loveita says she doesn’t know either. Loveita says you’re the one person that I genuinely love.

1:30pm Bedroom – Maddy asks Tim and Dallas if they you can see her full nipple. Tim says that’s not bad, we’re all about freeing the nipple these days. Dallas says you look like a fembot from Austin Powers. Christine says you can see everything. Tim says the areola. Its too much. 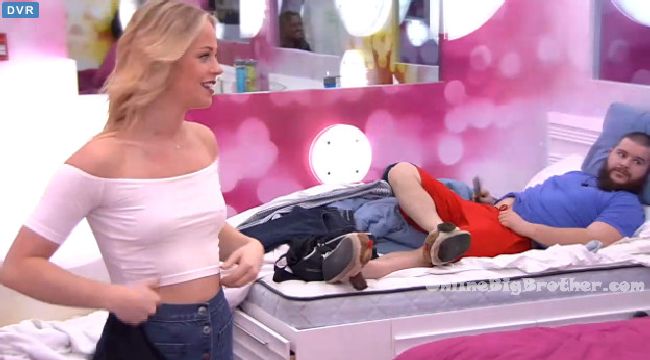 1:40pm – 1:50pmLoveita talks to Ramsey in the havenot room. She said don’t tell Ramsey I told you. So I don’t know if you lied or she did. I don’t know if you’re aligned with Maddy or Jared but just be a lone ranger. Loveita says at least I can leave knowing I did nothing wrong. I was told Ramsey, Maddy and Dallas are voting to keep Sharry in the game. Ramsey says I can tell you that Maddy, Dallas and I are voting for you to stay so whoever told you that is lying. Loveita says I hate the bullying in here. Just vote your own way. Ramsey says she is the biggest snake in the world. (Cassandra) Everyone knows I’m gunning for her. Loveita says the way she is trying to be friends with me right now. I can see right through it. Ramsey says she is best friends with Kelsey.

2pm Big Brother blocks the feeds. The live feeds will likely be down until after the Eviction/HOH episode airs.

this week with Loveita and Sharry on the block feels like its been an eternity…anyone else feel the same?

I am all team Tim and Nikki but I cannot wait for Nikki to be on the block because that will be something to watch…plus her being a have not. …I feel like being a have not will make her quit for sure! But I want tim and Nikki to go far in the game as they are so much fun to watch. If not then I hope mitch or Phil win the game….my other 2 favs

I agree, It seems like weeks since the last eviction. Not a lot of excitement so far. Too many floaters, too many people think it’s too early to start playing, and too many that think they are safe for a few weeks. Hopefully someone who came to play wins HOH and makes a game move. Shake/wake some people up. The only thing interesting so far has been Nikki’s rants. Even Tim is getting boring. However, I fear this how the season is going to go, everyone floating to the end.

because there were so much down time with the feeds, and a lot of waiting around for them to come back on!

Dallas’ mouth is too loud to the point that he’s spilling his plans to his biggest enemy. (Cassandra).
Regardless I hope that HoH goes to someone not working with Jared/Kelsey/Rail even if that means Dallas is still in the house.
That trio is the most insufferable in the house, somewhat power trippy, not entertaining and they bring nothing to the feeds.
Rooting for either a Nikki or Maddy HoH because itd cause the most waves.

Get Dallas and Raul out! hate them! i feel bad for Sharry! she probably going home tonight!

Well goodbye Sharry. If only you knew when to jump ship and not soeak for Loveita, you would have had at least another week.

Why cant we have more than 3 faves?
Nikki and Tim are so obvious. Phil has been growing on me. Ramsey is so rootable to me for some reason. I think its because of how rude Kelsey has been towards him.

I dont like Dallas and Rail either. After seeing last nights episode, Christine seems so hateful. She also doesnt add anything and sleeps in the bed all day. In fact, Christine’s strongest ally is the bed.

“Christine’s strongest ally is the bed.”

….And her leopard-print clothing a la Peg Bundy.

I just want a week where Nikki has to put Raul up so that she is forced to say his name, improperly, over and over again. Rule. Rool. Rowl. Rall.

I want to see a Tim or Nikki Hoh and watch these suckers scramble! It would be great feeds.

i suppose it will be some kind of endurance comp. those are more interesting, and more used, when there are more people up there anyway. i am not sure what the theme would be with this BB house set up of course.

and considering this year’s theme, i am pretty surprised at the lack of things for canada to vote on, or random gambling moments that are being missed.

I miss the Twistos twists, obviously. the thing that made BB CAN so different from the US is the level of input from Canada to actually change the game around. i don’t want a whole season of them waiting for the other shoe to drop, or secret panel to open, or roll the dice/turn the roulette wheel and that never actually happens.

Is it me … or does Christina look abit too much like Steven Tyler from Aerosmith?