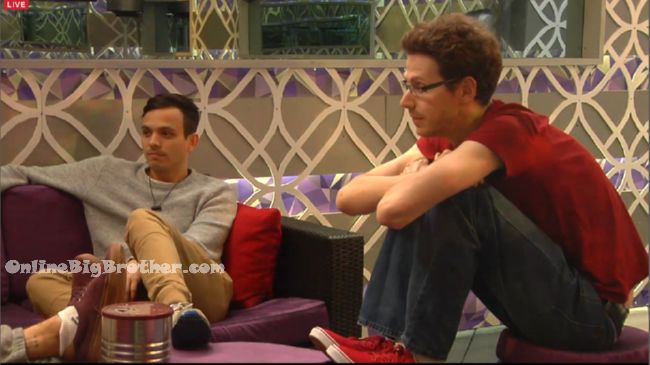 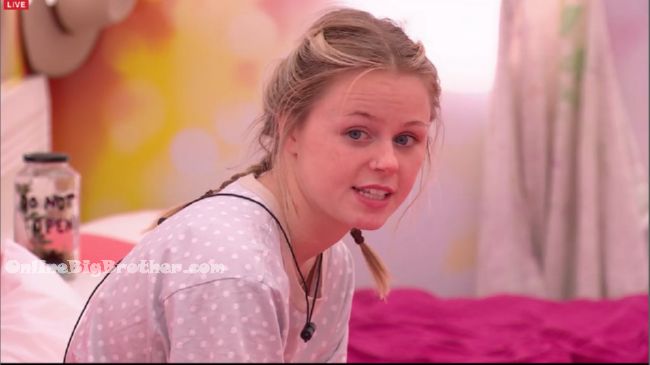 10:22 cam 3-4 red room Maddy and Dallas Red Room
Dallas says he has no choice not to trust Ramsey.
Maddy doesn’t want him to fake trust him
Dallas – He threw me under the bus
Maddy – you threw all of us
Dallas – who do say he threw us under before I did
Maddy is pushing for them to start working with Ramsey.
Dallas says Ramsey threw him to the wolves, “He was trying to save his own a$$ madeline take it for what you want”
Neither of them trust Sharry or Loveita but they think Sharry and Loveita trust them. Dallas says it’s because they have no choice.
Maddy says she was messing with Sharry and Loveita pitting them against each other. She doesn’t think this will impact her game, “One of them is going home”
Dallas mentions Tim putting up Jared and Raul and Ramsey is saying Kelsey and Raul.
Maddy usually believes Jared. But now she’s thinking they are targeting her. 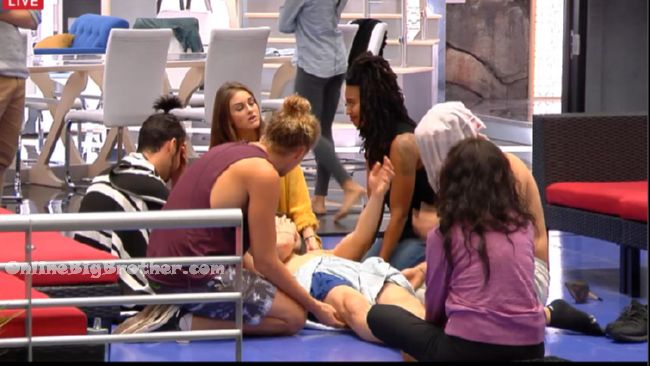 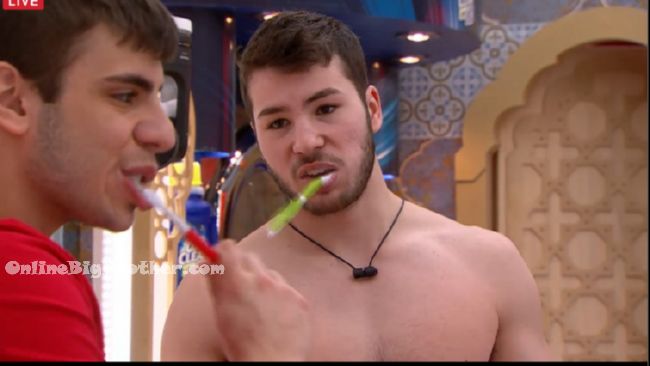 10:47 cam 1-2 Phil Nick bathroom
Nick says Dallas is playing both sides again. Nick says he’s gotta distance himself with Dallas before they find themselves on the block guilty by association.
Phil is stressing to Nick he has to build relationships with people other than Maddy. Maddy’s time in the house is limited.
Phil stressing for Nick to not forget why they are here.
Phil calls Dallas a guy’s guy and stupid, “I can manipulate Dallas no problem”
Phil – Kelsey is going to sewer herself
Nick – Oh ya
Phil – our basses are so covered
Nick – I know
Phil says Dallas is the only one that might put them up
Nick is worried about ramsey.
Phil instructs him to have ‘Life chats” with everyone all the time.
Phil – I want Niki to win she’ll put up Dallas and Raul
Phil – DON’T THROW IT (HOH) 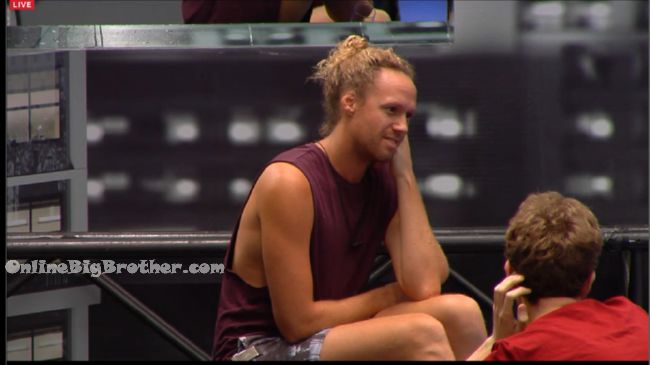 11:00pm Tim, Joel and Cassandra
Talking about the brothers and how it’s going to play out in the house.
Cassandra – Phils a superfan
Tim – They’re could be a fourth major alliance
Cassandra – who
Tim – I can see me and Jared working together one day.. I really respect him
Cassandra – he really respect you he wants to work with you
Tim – I could see working with him.. I really want to work with Jared.
Tim – we’ll see how it plays out.. Dallas has said nothing
Tim is worried Dallas will put him up. Cassandra thinks it will be Niki and maybe a brother
Joel confirms Dallas has mentioned the brothers.
Tim says the house doesn’t trust Ramsey, Cassandra and Tim agree he’s going to be “In the mix” next week
Tim – they’re will be a time when people go after Christine.. just to flush her out
Tim – Maddy is a sitting duck, it’s funny she carries that duck around
Cassandra – she’s brunt too many bridges
Tim thinks Ramsey and Dallas are going up next week
Cassandra hopes that happens.
Cassandra – Ramsey’s been playing both side’s all season (LOL)
Tim asks about the brother and ramsey
Cassandra – they’re not close
Tim asks them if they would want HOH
Cassandra – it’s too early
Joel seems to think they can win HOH and get Dallas out
Tim and Cassandra now agreeing.
Tim says they could use Niki as a pawn.

Chit chat.. Niki joins them near the end does some impressions.

midnight Bathroom Mitch and Joel
Mitch is happy with their group of 7 but eventually some of them have to go. He’s wondering who should be the first.
They agreeing Dallas and Maddy are big targets in the house.
Mitch says Niki will go after Raul.
Joel really wants to see Dallas go next week saying Dallas is always flip flopping.
Mitch agrees, “He’s such a wildcard and I don’t have a great relationship with him”
Joel points out how at first Dallas was all fun but not anymore.
They both agree Maddy isn’t going hard for the HOH and if she wins it she’ll go after other people. It’s Dallas they are worried about.
Joel says Dallas supposedly out a brother’s name and Rasmey as his targets.

12:30am Have nots Joel and Loveita
Joel asks if it’s Dallas and MAddy on the block would people vote out Maddy because she’s “Ruffled a lot of feathers” in the house.
Joel – Cassandra is voting to keep you
Joel says he’s voting to keep her because he knows she’s on his side 100%
Joel wonders why Sharry hasn’t campaigned to him, he feel slighted by this.

Mitch and Joel are running the show from the shadows. Future BB Floaters take note.

mitch/joel have not pulled the most strings this week

as a token of thanks for their effort, this person has been promised loves jury vote

Kelsey is just trying to control the whole house

I really like Maddy and Nick together, I hope they work with each other!!!

I think Maddy will bring Nick (and Phill) down unless Nick will distance himself from her.

There is absolutely nobody I like this season. They are all boring and clueless. No wonder they planned on bringing in the 2 wildcard internationals.

I think Loveita needs to go home.
No way she can continue in the house hiding that bad weave for the entire season.
Haven’t the houseguests considered that?

u sure the weave is ur only reason? i would like to see them both saved by a floor veto lol

just kidding …i hated that last year! so fixed..and only reason she won the game!!!

wonder what happens when the cigs run out? it looks like everyone smokes..
it wont surprise me to see Marsha the Moose with a cigarette soon lol
some look awkward smoking…like Jared and Raul

Are their mics not picking up low talk very good this year or is it maybe I’m just getting deafer.?