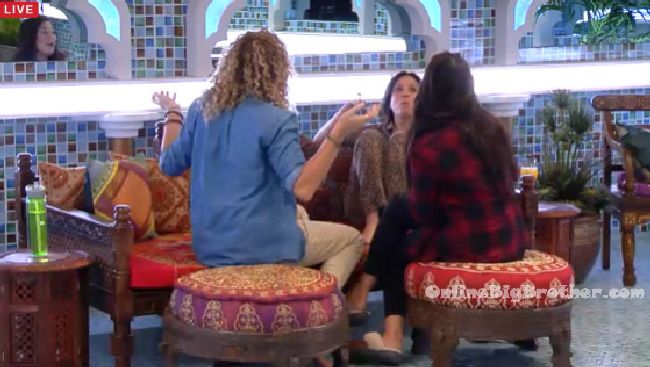 Big Brother wakes up the house guests. Tim talks to Phil about learning the rules of big brother Canada. He says that he wasn’t here for the first week and so he doesn’t want his vote to affect the balance of the game.

Loveita campaigns to Tim about getting his vote. Tim says that this week he doesn’t want to affect the balance of the game this week. I’m going to leave it up to fate for what happens. He tells Loveita to talk to Nikki though. 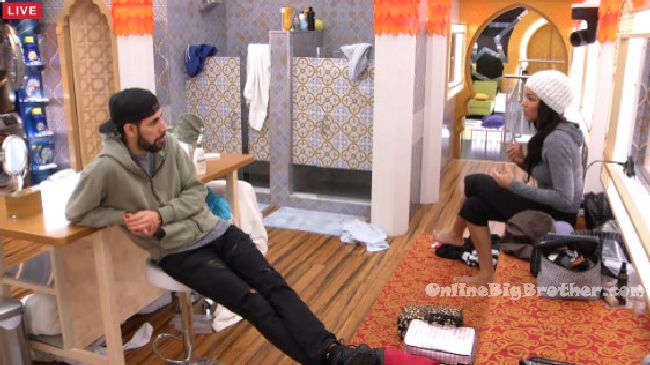 10:40am Bathroom – Ramsey tells Loveita that he thinks this vote is hardest for him. I truly am still loyal to you and Sharry. My loyalty will forever stay true to you and her till the end of the game. Loveita says I have no loyalty or commitment to Kelsey or Jared. They did not talk to me or ask me anything. They talked to Sharry. If I stay, I am still their bigger target. Sharry isn’t going to be their target. I had a rough first week and if I go home, I’ve accepted that. There is a reason they want me gone. I am the biggest target. I haven’t been disloyal to anyone. You need to make the decision to what is best.

10:55am By the Pool Tim tells Christine she should flip a coin in the ceremony of whether or not to use it. Cassandra tells her she should do that. Christine says I like that! I might do that. Tim says you could use a poker chip or something black or red. Christine says I can’t control who goes up and its probably going to be Maddy or someone. I’m going to do it, I’m actually going to do it. I’m leaving this whole thing up to fate! I like it, I like it a lot. Tim leaves. Christine says I really do feel like its 50/50 I think they’re both dangerous. One minute I want Loveita out, the next minute I want Sharry out. Christine tells Cassandra that if she wins HOH she is going to have a power trip for a minute.

11:10am Backyard – Dallas tells Cassandra that Loveita has my vote to stay this week. But not everyone is on board with that. Cassandra says that she saw Ramsey’s true colours since day one. She says that people were in the pink room talking about Nikki and I saw him leave and go tell Nikki everything they were saying. Maddy joins them. Cassandra says I am voting out Sharry. Maddy says I think it will just come down to it and then I’ll decide. 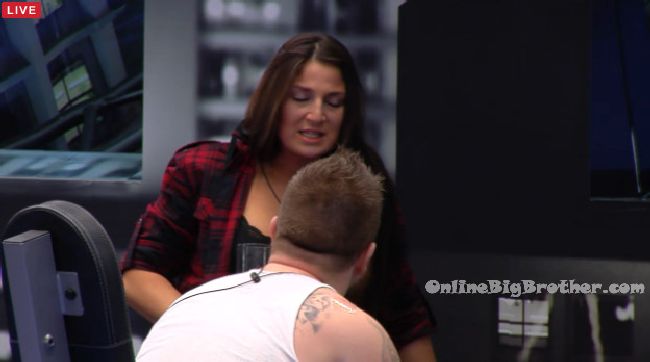 Cant stand christine. she thinks her shit doesn’t stink. I will cheer when she gets her old ass voted out.

Christine wants to prove she’s a strong player but not get any blood on her hands. Who flips a coin on veto ceremony?? Weak.

I hope Loveita stays, but it would be cool if they both get to stay though bc I feel like right now they’re the only 2 willing to put up Kelsey & Jared. Christine & her “fate” talk is getting annoying fast… make your own destiny you’re too old to be waiting around for fate.

I am so tired Loveita saying she wants to go home and asking people for votes to stay. Her holier than thou attitude is getting old fast, be the bigger and better person by your actions not by TELLING people you are a bigger and better person.
Christine is a mean old woman. I do not know what Loveita and Sharry did to her but she needs to learn to treat people better. She is very dismissive when Love and Sharry come to speak with and it’s getting a bit disrespectful. Speaking of disrespectful, a coin toss is very disrespectful to this game. This is a strategic game (on top of being a social game). Ugh! This is frustrating.

I agree with you. I really disliked how dismissive Christine was with Loveita when she told her to not waste her breath trying to talk to her about using the veto. I just hope the situation is reversed and Loveita or others can tell Christine the same.

Same! It will be glorious. lol

I find Loveita very strange. She seems very good at justifying being angry at someone because they “did” (or didn’t) do something for her benefit. It is always their own fault that she doesnt like them, or wants them out. The funny thing is, her face make me think she truly believes that. I’m still trying to figure out if its just game play, or she is eally deluded.

some of them are not taking advantage of making deals. so when a nom comes along to make a deal, they flip them off. short sighted, anyone like Christine should realize that even if one nom gets evicted, the other one, close to the evictee, is still in the game. others are still close to the evictee and remaining nom. Plus, christine should talk to HOH about use it or not, since he’d have to name a replacement and be prepared for it, as in make a deal with him. but then what’s the point of that, since jared is as clueless about the power of deal making too.

on the other hand watching AD, and reading this site, you realize just how little time HOHs have to make their nominations. they pretty much have to have it decided before winning, but having to name them that soon after winning is actually a detriment to the entire game. give HOH a minimum of 24-48 hours in position, let the deals be made, then do the noms. it can’t take that long to film and edit the scenes for the show.

With antics like this, hell would have to freeze over for Christine to win if she got to the final 2 (which I don’t think she will). I find it funny that she’s employing the Passive Floater strategy, but is still being so obnoxious in the house. I agree with other commenters that that is just really disrespectful to a game that is all about strategy. Does it benefit you at all to save either nominee Christine? No, it doesn’t.

I kind of see why Cassandra would want Loveita or Sharry to stay, but I’m not entirely convinced that Sharry or Loveota would place what they have with Ramsey before her. Plus considering what happened last year with Brittnee nominating and getting Willow evicted (who was super close to Sarah) isn’t Cassandra thinking that Ramsey may do the same to her down the road? She’s even said she thought he’d put her up on the block. Cassandra put 2 and 2 together.

I’m assuming Maddy is BS’ing Cassandra. She certainly has people. Is her alliance as strong as it was week 1? No, but it’s not like Ramsey, Sharry, Loveita, or Dallas would put her up.

Is the POV ceremony today?

It’s not that I don’t like Tim. I’m more flabbergasted that the house is buying what he’s doing.
So I’m nots saying I dislike Tim when I say how stupid are these house guests to buy everything he’s selling?
Excuse my rant, but a few things are really bugging me.
Jared: When you converse with people… look at them, not at the mirror behind them. Narcissistic clod.
Christine: Flip a coin? Moron. That much leopard print should be outlawed.
Kelsey: Try having a conversation with a man without touching him. Try.
Sharry/Loveita: Don’t whine about being isolated when for days you make no attempt to do anything but mope as far away from everyone as possible.
Okay. It feels better to get that out of my system.
I don’t care who is evicted this week out of connection to any of the hg’s this season. I’m somewhat concerned about how this season is going to end up like one or two people calling the shots and everyone lining up like good little lemmings at the cliff.

I’m not trying to drum up competition or show any ill will ESPECIALLY because I’ve loved SImon and Dawg for so long, and they seem to have a good reason for some of the articles showing mainly video clips.

Unfortunately I catch up on my Big Brother feeds during work where I can’t watch the videos at all. Does anyone else also follow another blog/site of the live feeds where it’s mainly written out?