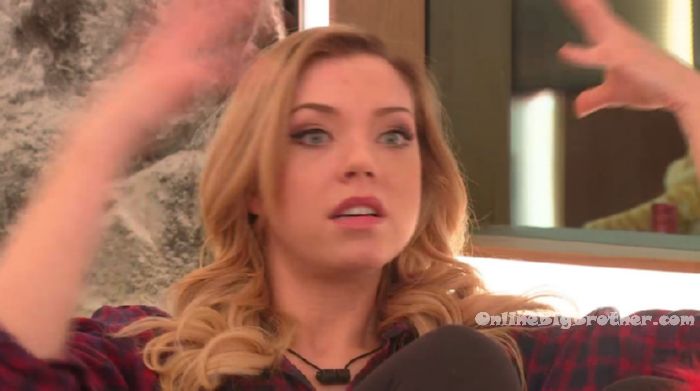 Want to watch the Big Brother Canada 7 live feeds but live outside of Canada?
Bypass the geoblocking with HideMyAss VPN and be Canadian Anywhere: VPN Help Guide

11:20pm HOH room. Chelsea and Anthony. Chelsea – I am going to do the best thing for my game for the people that I am working with in this game moving forward so that we can all get far together. Anthony – I was jumping for joy when you won. Like honestly I wanted to win but happy you won. Chelsea – and I would have been happy if you had won too. Anthony – you have to get Kyra under control because that is going to put a target on your back. Chelsea – I know. Its hard because I know this show is going to be watched again and these conversations and never just between us. Anthony – I totally understand. Chelsea – immediately after that exit (Maki), the reaction (Kyra) made me go have we made a mistake. Have we given someone a second chance that is going to be .. again!? Anthony – yup. We can work on that. Chelsea – I can’t have a shadow that is going to ruin my game. Anthony – I had talks with her or I had talks with them and I let them know that .. stop with these things at the surface. You need to fight a much deeper battle. The reasons you’re giving are not deep. The reasons – I have a lot to fight for or I was crying before, I’m not going to cry again. No one care about that. Its got to be deeper. Anthony tells her that he’s got her. Chelsea – know that I have you 100. Anthony leaves the HOH room. 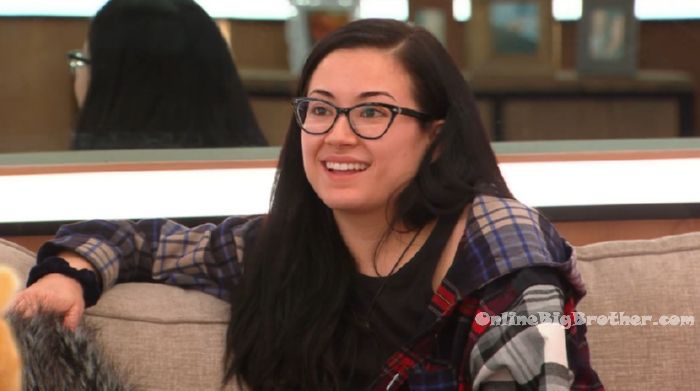 11:30pm Kiki joins Chelsea. Chelsea – we haven’t talked much game. Obviously we voted differently .. let me know where your head is at. Kiki – the thing is for this week everything I felt was set. We had this plan and everything was going to follow through. Which is why when Maki was so distraught about being put up I was like yeah you have my word because he was freaking out. So as things progressed and he started blowing up his own game .. I was in such a torn situation. If I flipped the people that I was working with wouldn’t trust me because it would look like I am not loyal. I had to do what would cause the least amount of waves. Chelsea – its you’re damned if you do and damned if you don’t. In this game all we have is information and our word. I don’t fault you for that. I respect that. Who do you feel you’re afraid of. I know you’re close with SD and Maki. Kiki – in terms of where I am at .. I want to work with you. Chelsea – moving forward is there anyone that you can’t trust? Or who wouldn’t have your back or someone that would target you? Kiki – I’ve never been in your position. integrity and sticking to my word is really important to me. And I really want the best person to win this game. Chelsea – I honestly don’t know what I’m going to do. If you were to be in power next week .. would you go after me? Kiki – oh f**k no. I really like you. You are not on my radar. Chelsea – my mind isn’t made up but I appreciate you talking to me. Kiki – I do want to work with you but the only thing holding me back is that you’re close to Adam and I don’t think he likes me. 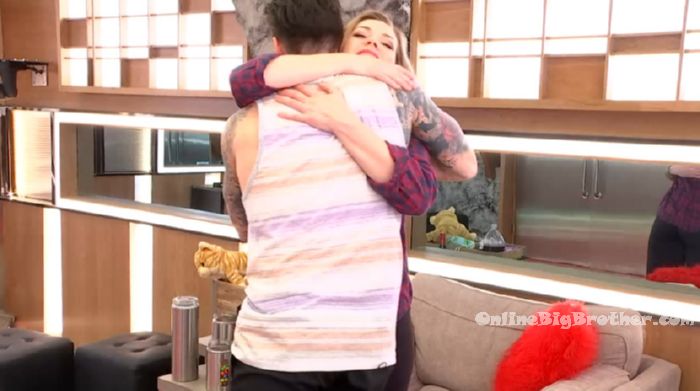 12am HOH room. Chelsea – If feel that you have been a victim of circumstance. I appreciate you being honest and that you’re a bit of a free agent. I appreciate you saying that moving forward I would have safety from you. Chelsea – I get that you don’t want to go back on the block. I respect that loyalty does mean something to you. 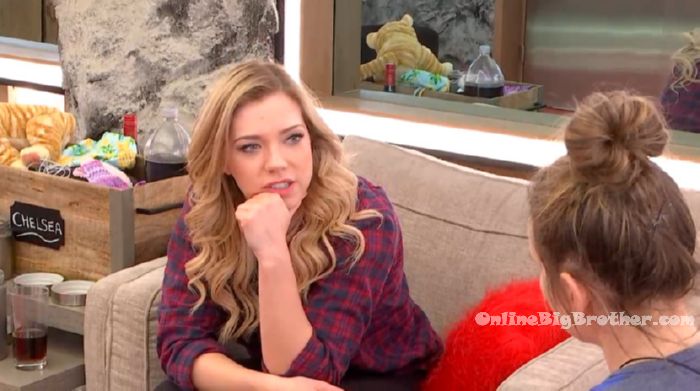 12:20pm Cory and Chelsea. Cory – its ridiculous for me to say you and me .. lets work together because there is so Maki going on in the house. If you do ..like keep me off your radar. If I win power, you are off of mine. Cory – I feel really good about this. Chelsea – I feel good about us too. 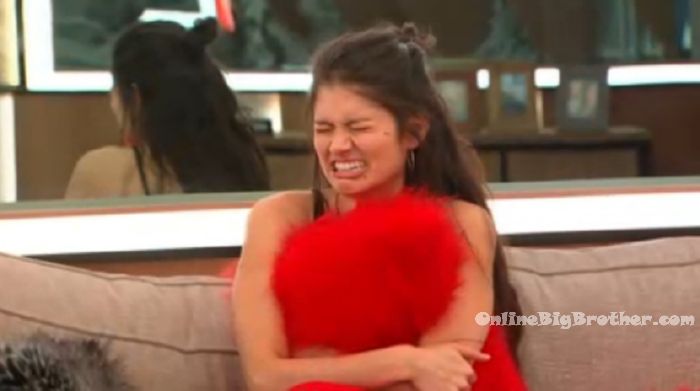 1:37am HOH room Est and Chelsea. Est explains how she gave her word to Maki and that’s why she voted for him. Est – this time around I probably shouldn’t go to that person and say that I won’t vote them out, instead I will promise that I will vote with you. Because then I will keep my word to you and not the person. Chelsea – I appreciate that. I can honestly promise you that I have never said your name. I have never thought that you could be a pawn or a target. And I can promise you that if I were to win HOH next week, you would not be a pawn or target. I literally said days ago to kiki that we could go far with you. Just know that whatever you decide you have my vote. Chelsea – I appreciate that. Est leaves the HOH room. 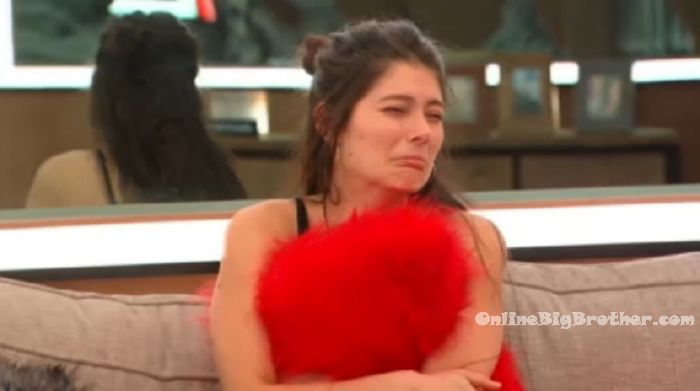 Support the site and purchasae your Amazon goods through our link below. It doesn’t cost you anything and we get a percentage of what you buy.

keira has one d/r segment in the series so far. one. total. in five episodes.
she’s the dina lohan of bbcanada d/r segments.

Guy From Canada
Reply to  another name

If your game is to float not having DR sessions is evidence of being very effective. John Pardy did that in season 2 until he kicked it up and won out the second half of the game. He stated afterwards he was quiet and learned from Neds for weeks before kicking it up from invisible in the house off everyone’s radar to winning his season. Not an entertaining way to play but an effective one.

another name
Reply to  Guy From Canada

I thought Jon was one of the go to’s that production used in tasks and for reaction commentary in d/r from week one. his screen time wasn’t that of under the radar to episode only watchers for that reason. while he had no storyline really at the beginning, he was one of the mug face and make a silly comment as the goofy newfie schtick d/r was so fond of using.

I want to see Kailyn on the block. I imagine she would be volatile.

I completely agree. The stares that Momma would give would be hilarious.

I give it about two hours before Chelsea blockades the hoh door.
Maybe Kiera’s complaints about Kyra weren’t so ridiculous when feeds started.
Like they aren’t the main reason Kyra would prefer that they evict Kiki over Damien. Because we know that Kyra isn’t being strategic when she says her main targets are Kailyn and Kiera. It’s personal.
In a game where they consider the 29 year old psychic that has pretty much 0% of winning a veto a backdoor target…

It’s hard to wait for an update.
Has anyone seen if nominations have happened yet?

I’m pretty sure it hasn’t happened yet.