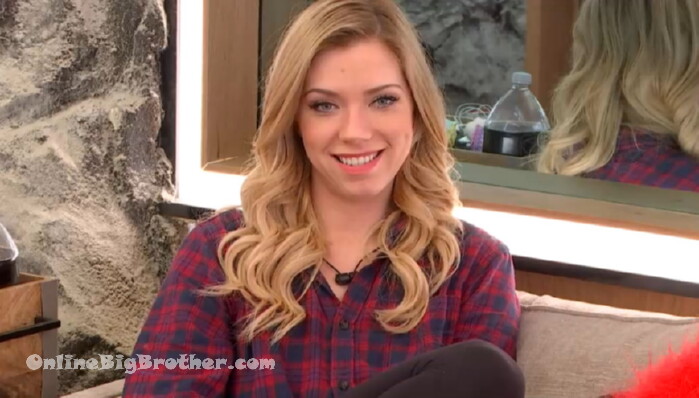 Big Brother Canada Spoilers – Maki was Evicted by a vote of 6-5 the tie breaker was Dane. Chelsea goes on to 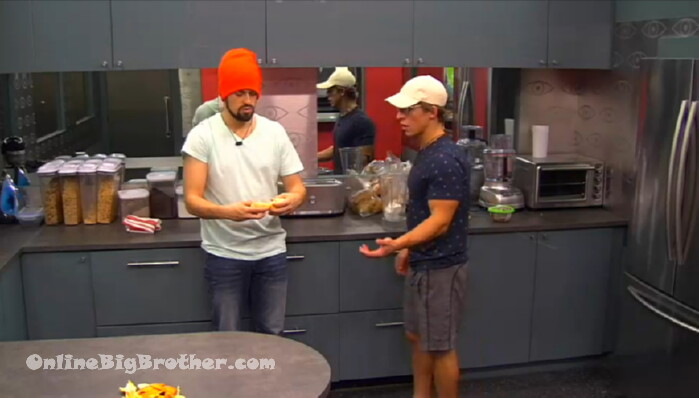 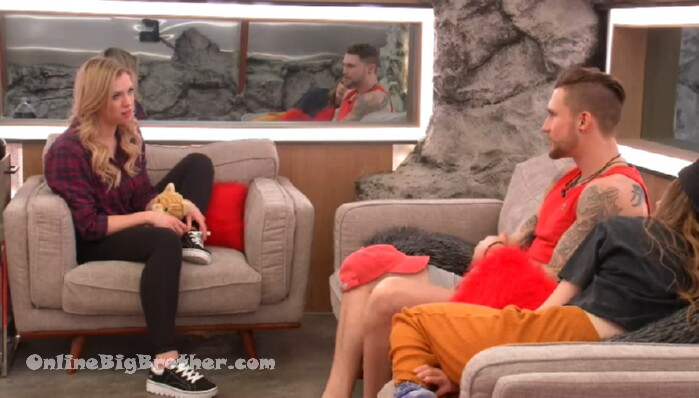 Adam says the best thing about Chelsea winning now is that all their 4 “strong guys” get to play next week.
Adam – I don’t think Momma’s going to win sh1t.. I think that KIKI and Damien.. I think KIKI is going to win..
Kyra comes in

Chelsea – If I put Damien up
Adam – nobody will be pissed
Chelsea – he won’t be surprised..
Adam tells her that nominations will be tomorrow.
Kyra – who will you put up next to Damien
Chelsea – I dunnno… I don’t want it to be a wasted HOH but sometimes you have to just clear out numbers
Sam – this one was a huge one
Kyra – I don’t know it didn’t seem too big (LOL)

Chelsea – Damien and Momma
Kyra – yeah, you have good reasons for both
Adam says if MOMMA wins POV then you back door somebody
Chelsea – you put two of them up and Damien comes down who goes up .. .
Kyra says once Chelsea won the HOH she is being “so nice” to her.

KYra – She literally told me after i Stayed I don’t deserve to be here .. she said you showed you’re true colours the first week..
Adam brings up “blowing up” saying it’s war after the votes came out a tie because there was two people he thought were going to vote to keep Kyra and they didn’t. Momma thought that was directed to her.
Sam mentions the divide happened after that.
Kyra – how does she has this much influence.
Sam – KIKI and Stef were supposed to be with us voting our way they were all on board in here bathing in my tub..
Sam – they should us right there that they aren’t loyal at all..
Chelsea says she’s not trusting Stef and KIKI after that vote. 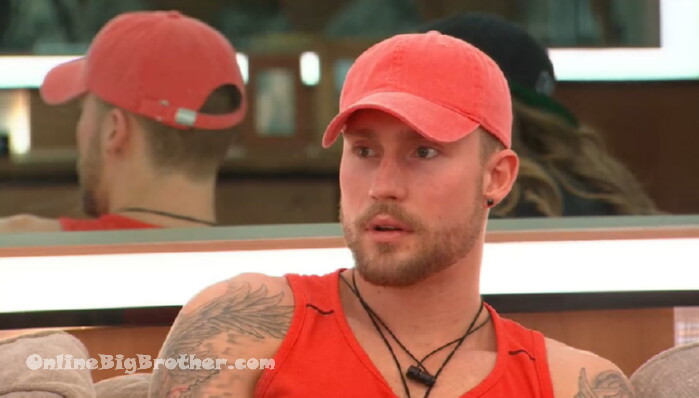 Chelsea wonders if she puts up MOMMA it’s cause a rift between her and Anthony.
Kyra – you have to talk to Anthony
Kyra and Chelsea says KIKI would go after Sam or Adam.
Chelsea asks them if she puts up Damien and Kailyn how much damage can MOMMA do.
Adam – lots..
They agree mark would vote MOMMA out. Adam is pretty sure “the boys” will vote out MOMMA
Sam says Esti and KIKI will feel like they owe Chelsea if they don’t go up, “right now they are petrified”
Adam is confident they’ll have a good chance to win HOH with all the guys playing “We got your back”

Chelsea – she is going to spread so much Sh1t about me.. and she was trying to save someone else imagine when she’s tryign to save herself..
Adam – you don’t want to put up Eddie
Chelsea – no Eddie.. 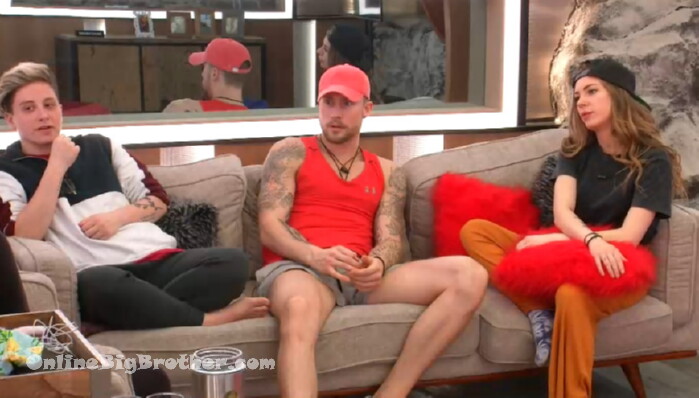 Adam – what if you put up Momma and Esti.. is that a thing.. if esti pulls herself down Damien goes up. Momma goes home. if Momma pulls herself down KIKI goes up KIKI goes home..
Kyra doesn’t think MOmma will win POV
Adam – so KIKI and Damien..
Chelsea – that would be safe..
Chelsea says if she doesn’t put up Kailyn and she just backdoors her than Anthony will still feel good.
Chelsea – I’m not putting up esti so Dane’s happy..
Kyra thinks it’s smart..
Che;sea’s excuses will be KIKI doesn’t talk game tio her they voted against her.
Kyra – she’s a floater she doesn’t seem like she wants to be here half the time.
Kyra and Sam says Damien is lost ..
Sam – he wakes up every morning saying where or what am I doing..
Kyra – I always make him food and he never says anything
Adam – that was a good f*ing day.. I was sh1tting bullets..
Chelsea – it is what it is. It’s logical it’s unemotional it’s a game. That’s the smartest thing we put up KIKI we get out a floater worst case best case scenario we backdoor MOMMA BOOM away we go
Chelsea – who do we say is the target
Kyra – KIKI more.. than we are taking a number away from ESTI..
Chelsea – KIKI is a target
Kyra thinks Damien will come to their side
Chelsea – really? Seems clueless
Adam – MOMMA doesn’t have anybody.. 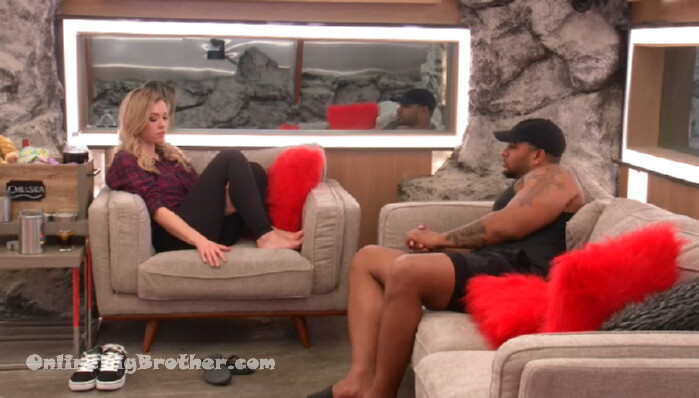 11:14pm Chelsea and Anthony
Chelsea says this week might be a chance to get someone out that doesn’t deserve to be here.
Anthony says he only really talks “serious” game to 2 other people.
Anthony doesn’t see himself as a target right now. “Maybe it’s because I haven’t won a HOH maybe because I haven’t sided with any big group I have a good relationship with everyone else”
Anthony – I feel like we have a strong relationship.. I respect Dane..

Gosh! I really don’t want either Stef or Kiki going up on the block. They are the only two likeable people in the house other than Eddie and Kailyn. Ugh! Plus, I like Kiki and Stef because they know the guys have an alliance.

Glad the eviction vote was a tie, was hoping the non pretty boys side would take it and give the boys the shock that they are not running the house but guess they got that a bit anyways. What is going on with Damien and the secret room?? I haven’t seen him in it again, or even check to see if he can. And no mention of it on the show unless I missed seeing something.