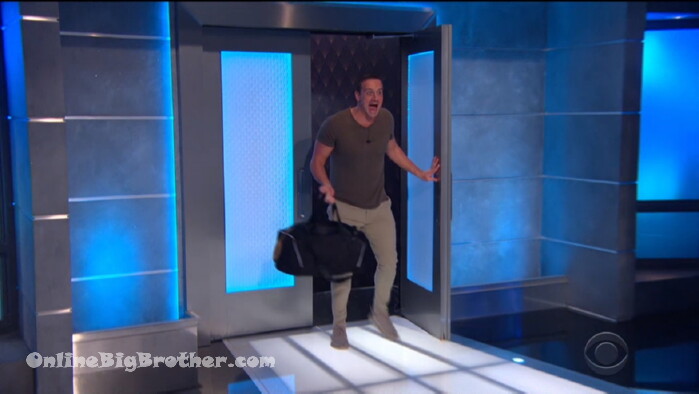 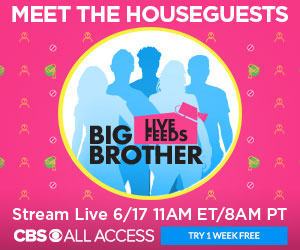 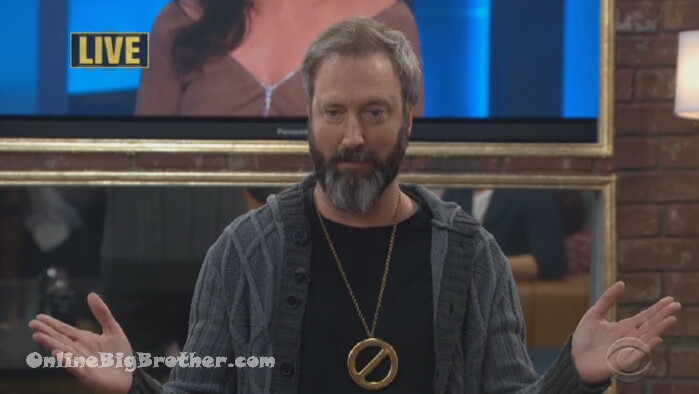 Power of Veto Winner: Tom
Tom uses the Power of veto on Dina. 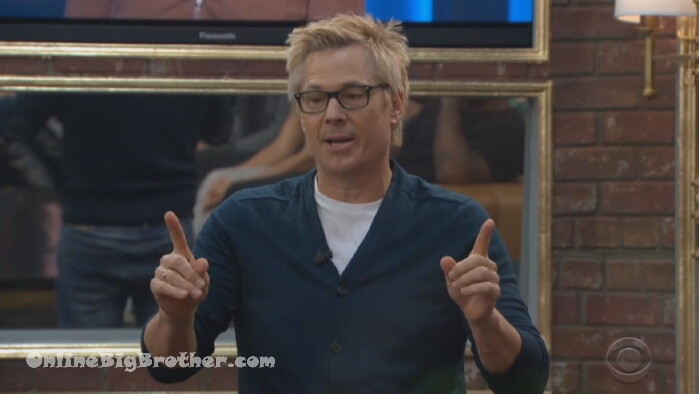 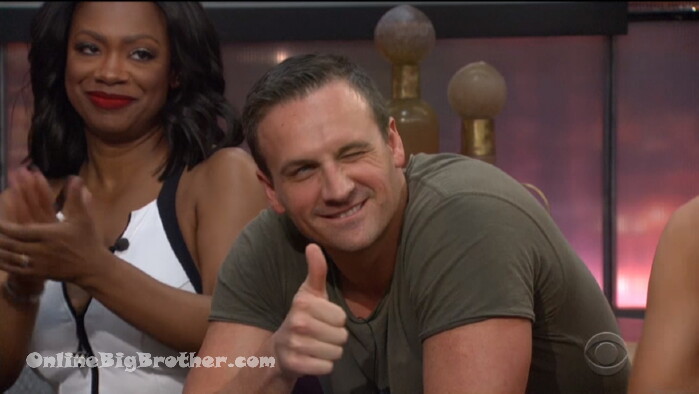 Tamar and Ryan are the two nominations. 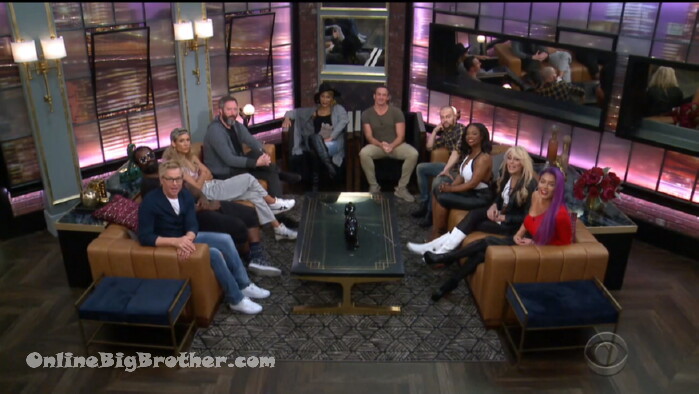 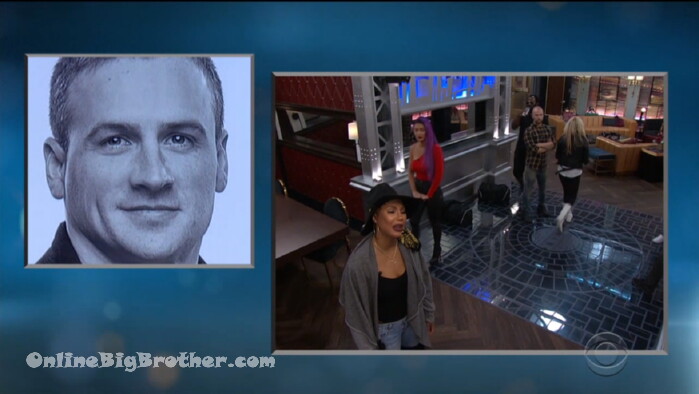 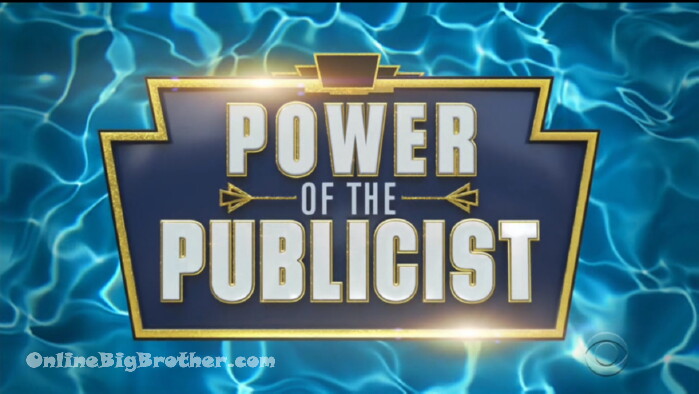 The ability to give one houseguest the power of the publicist..
This power allows a houseguest to remove him or herself from the block at one of the next two nomination ceremony or Veto Meetings. Keeping them safe at the next eviction. This power can only be used once and expires after the live veto meeting February 4th.

Here is the CBS link for more information. https://www.cbs.com/publicist/ 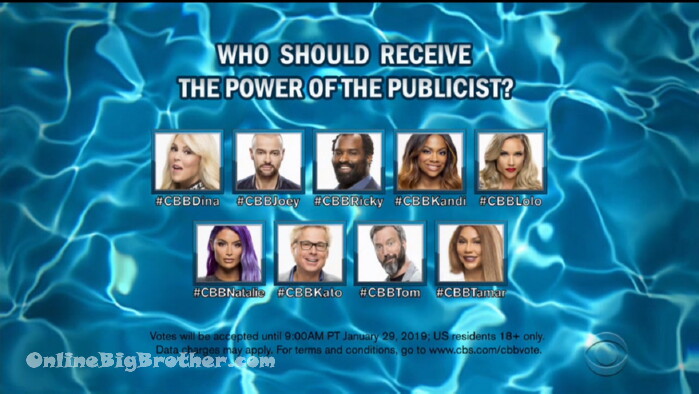 Wednesday’s show will reveal the results. Head to Twitter to cast your vote by tweeting the hashtag of the celebrity houseguest you want to receive the power of the publicist. 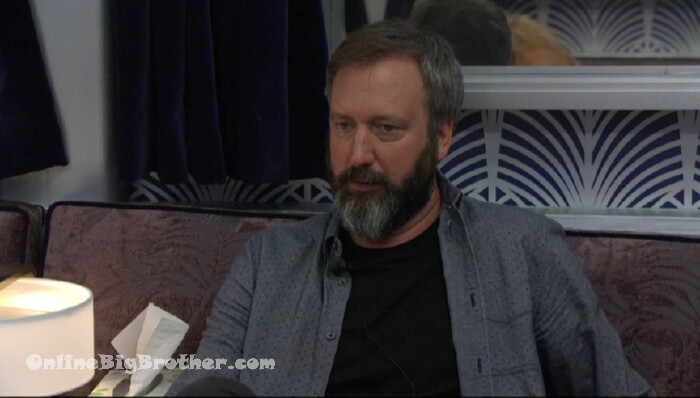 6:06pm Feeds begin.. Tom and LOLO are in the lounge.
Tom – Ryan took it fine he was laughing 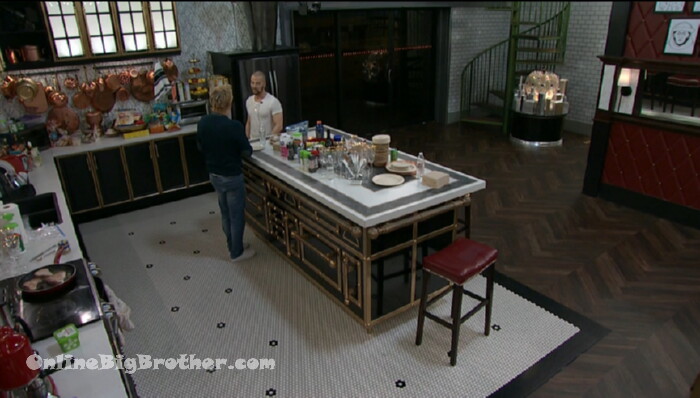 6:16pm JOey and Dina in the bedroom.
JOey – I have to wait till f*ing Friday.. I can’t believe it’s Friday..
Dina – That’s a long week
Joey – it’s not worth anything unless you get first or second.

Joey walks into the kitchen to talk to Kato. 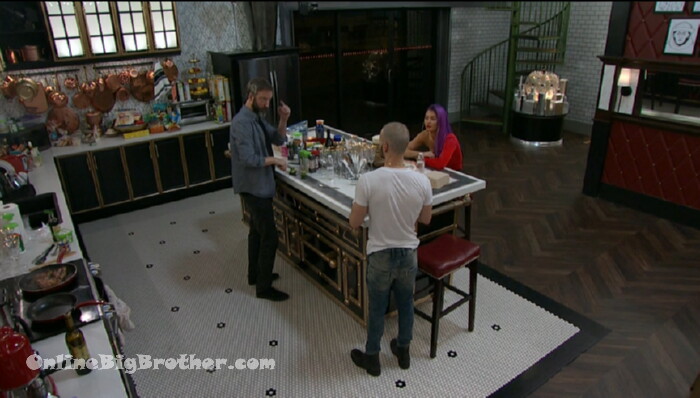 6:20pm Natalie joins Tom and Joey in the kitchen. They are cooking
Natalie – you Ok Joe
Joey – I’m good.. I am good i’m just.. Honestly looking forward to.. you know..
Tom says when Jon left he “actually teared up”
Tom says it was sad.
Joey says it wasn’t sad it’s just a game.
Tom says Ryan was laughing.
JOey – Ryan was excited .. he had a good game… a game’s a game..
Joey – I didn’t realize the next eviction was until Friday
Joey – Whatever.. look .. I got my plan when I get out I’m all excited.. do my stuff.. that’s how I think of it.
Joey – I like Head to head competitions.. this whole round the back stuff.. I hate it.. I don’t like it.
Joey – I know that’s the game .. I didn’t know the game I got caught up in the whole DO IT YEAH DO IT..
Joey – I was like alright i’ll do it..
Joey continues to complain about the aspects of Big Brother he doesn’t like. Which is most of it.
Joey – I hate it.. I didn’t like it in School.. I didn’t like it (Sneaking around talking)
Joey – I’m being straight.. I just don’t like it I don’t like the disingenuousness part of it.. I just don’t like it so for me it’s tough.. you know.. the cannibalization.. 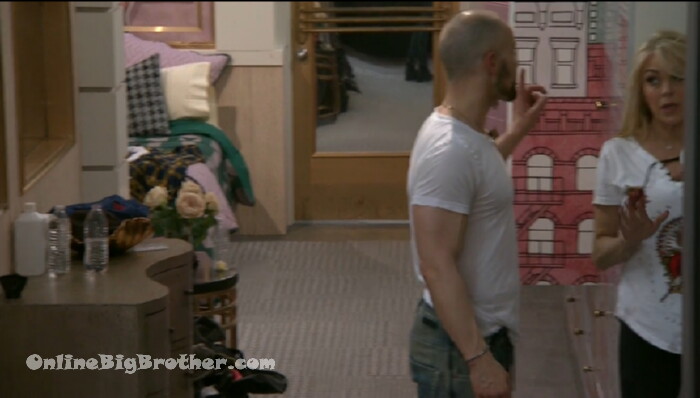 6:34pm Joey and Dina
Joey – you, me, Ta and Kandi we have 4 that’s four on five.. that means we have 2 days to peel one off
Dina doesn’t think Kandi will flip
Joey – I think we can get her
Dina – lets see who wins this head of household 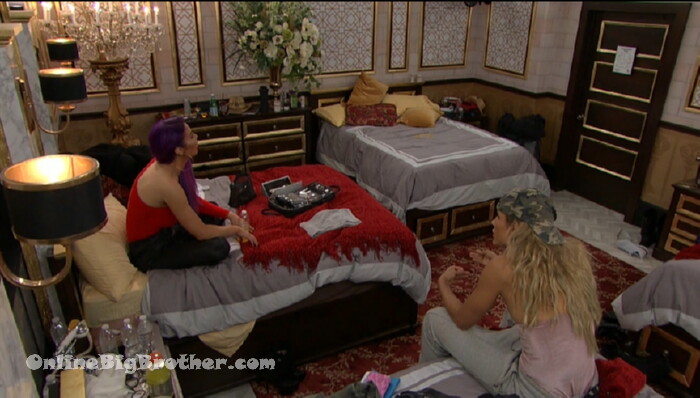 6:57pm LOLO, Ricky and Natalie
We start with Tamar leaving.
Natalie – something is up with her
LOLO – when is there not..
Natalie – if anything she should be happy as f* and trying to get back in
LOLO – shes not
Natalie – she’s pissed..
LOLO – it’s going to be her little digs every day
LOLO – we just got to make sure we don’t get cornered..
Natalie laughs that she left LOLO alone with Tamar today.

Ricky leaves..
LOLO mentions how everyone thinks they were behind getting Ryan out not Kato.
LOLO – people need to watch out for Kato
Natalie – I know
LOLO – he snipped off two people why aren’t people..
Natalie – and we won the Veto and HOH.. he’s winning
LOLO – that’s crazy they’re not putting it together
Natalie thinks it’s because they spend so much time in the gym.
LOLO – what around with our abs and muscles out.. Kato walks around and tells jokes.
LOLO – he’s playing a good game..
Natalie – hell of a good game.
LOLO says that Joey is starting to work the angle that there is a girls alliance. They need to reassure Kato there isn’t because it’s the truth.
Natalie doesn’t know what is up with this one (Tamar)
LOLO – it’s going to be hard I’m not going to lie
LOLO – She’s smooth man she’s smooth .. and she’s .. when you don’t want to talk about things she presses and presses until you talk about things
Natalie – she turns it all around she literally said Dina was against us
LOLO – and then we fact checked and it was like Dina voted with us.. STOP.. just STOP
Natalie – when we’re in here I asked her did you talk about our alliance to anyone she said no I wold never do that.
(Tamar told someone .. Hard to understand)

Now we have to watch Joey self-implode.

He is a very odd young man. Very persnickety and vain for a man. Quite spoiled and protected.

Joey didn’t know what he was getting himself into. I like to see the other side get HOH to switch things up.

who to give the publicist power to? i feel the next two to go will be joey and dina and imo neither is worth saving. i’m kinda leaning lolo/natalie in case joey wins hoh or ricky in case he goes up as a pawn. thoughts?

I am voting for Joey.

So, let me get this straight… First, Lolo was upset and jealous that Ryan was best buds with Jonathan instead of her. Then, she was flipping them off and stabbed Ryan in the back. Now, she’s crying… over Ryan? I’m starting to understand why she’s never had a boyfriend.

My POP vote is #CBBTom

He is keeping this game so entertaining for me. I just hope he doesn’t filter himself too much. I love Tom the way he is.

**feeds went to reruns so I think HOH is underway :-)

i’d like to see the power get used and i don’t see anyone putting tom on the block these next two weeks. joey is gunning for the girls and everyone else is gunning for joey. dina and ricky look like likely pawns while i wouldn’t rule out the possibility of tamar ending up on the block again. giving the power to tom, kato, or kandi seems like a total waste to me as those three shouldn’t be anywhere near the block these next two weeks.

It’s a strange thing for me. I love Natalie. And Kato and Tom. But seriously thinking about Voting Joey just because it will be him next unless he wins every comp. which he won’t. The predictability is starting to leave me kind of wanting something more exciting. I just wouldn’t want my favs to get voted out because of it. Lol. I honestly don’t see those 3 going before the others. So I feel like they are safe for the next 2 evictions. Just really want the power used as well for the excitement. And looks like Joey is the best bet for that.

I hope Natalie gets the power advantage.
Side note: anyone else think maybe Lolo has a crush on Ryan and Dina has one on Kato?

LoLo is an odd person.

I think she has a lot of pent up rage.

I can’t even tell you how many seasons I’ve watched…its crazy. Never been so turned off and disgusted as I am this season. I cannot stand watching Tamara AT ALL… she is awful. When she leaves I’ll tune back in. Unreal.

That was probably the most classy Big Brother exit ever. I didn’t know all that much about Ryan, besides being an Olympic athlete, but he seems like a really nice person. Probably one of my favorite house guests, because of how he presented himself. I will LMAO if Dina or Tamar win. Don’t get me wrong Tamar knows this game, but she is very dramatic. And Dina, well – she is the “mom person” of the house and usually they don’t last. Whoever wins HOH needs to split the pairs. I cannot believe I am going to say this, but Tamar needs to win the HOH. She gives no f^%$&, and it would be great to see K,T, L and N squirm.

Ryan has completely turned his life around. Classy and so nice. He came in knowing it’s a game. Not like some who are desperate. Even if you need the money..it’s cringeworthy to see grown older people act in a certain way.
At least Ricki is cool. I see Eve winning and I’m fine with that. She’s playing the game without being so tense.

I didn’t even get a chance to watch all of Big Brother. My local station was Interrupted by the news that 5 of our Police Officers were shot trying to serve a drug related warrant. Sigh

Does Joey ever stop bitching and complaining? Damn. Can they send his ass home already?

He is more annoying than Tamar!

UGH. My faves NEVER win ! I really liked Ryan..and although I didn’t think he would win against such a strong 4some…I was looking forward to having him on the show longer.
Very classy…and fun. Not so damn tense as some. While Kato and Tom are high fiving each other…Ryan was backdoored with no chance to play in veto. 7-1 against Ryan.
Tom and Kato are beginning to grate with their desperation. I guess they have nothing lined up as far as any work.
They’re so worried about how America sees them.
OK..start being a bit cool. And lightening up a bit.
OY. Just wait until Joey, Or Tamar or even Kandi win HOH.
In the words of the Cricket wireless commercial.
BYEEEEEEEEEEEEEEEEEEEEEEEEEEEEEEEEEEEEEE!