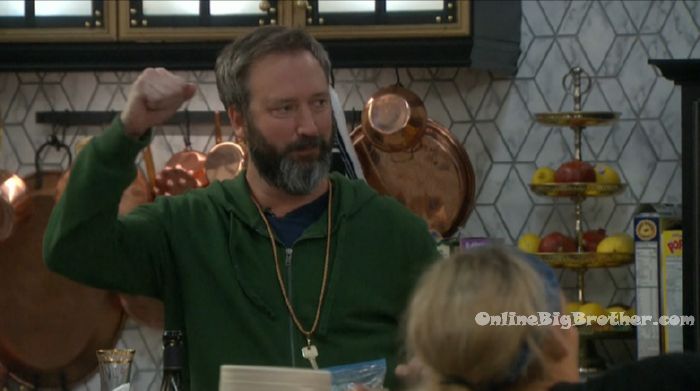 7:45pm – 1:07pm The live feeds were blocked for the Head Of Household competition.

Tom – I wasn’t scared. (Tom has the HOH key around his neck.) I thought it was fun especially when the guys were coming at you. Did they tell you – don’t hit them? Joey – yeah. Tom – I’m sure that has happened where people have punched them right in the face. Tom – maybe we should make a cheers to Jonathan, Ryan and Anthony. They all raise their glasses and cheers. Joey – that was a really impressive challenge that we just did. Tom – we were all really neck and neck during that competition. Joey – we were all within a minute of each other. Natalie – I was scared and talking through it .. saying thank you to my brothers for making me scared to do a challenge like this. They had me stay up to watch Nightmare on Elm Street. 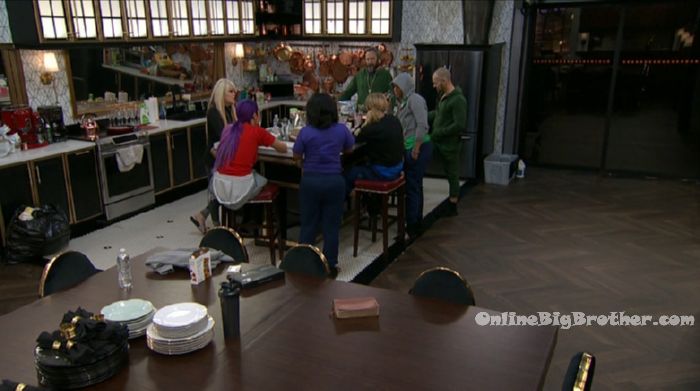 1:30am Lounge room. Lolo and Natalie. Lolo – It’s frustrating because basically the person that’s winning veto is winning HOH. Like its happened twice now. Kato won veto, then he won HOH. Tom won veto, then he won HOH. The same people are pretty much getting safety. Natalie – but at least.. Lolo – but I don’t care though .. they’re in our. They’re super cool but Tom can you know.. he is Tom. Natalie – but he really, really likes us. Lolo – I hope he does. I like him. Natalie – we will just be extra normal, same. Lolo – I am just really frustrated because I thought Joey had it. Natalie – yeah, so thank god he didn’t! Because we would be in trouble. Lolo – yeah a bunch of trouble. Do you really think he would put us up? Natalie – I don’t know. Lolo – he’s had a lot of people put him up. He would really over look that and put us up? Didn’t Kato put him on the block? Natalie – nods yes. Lolo – we have got to go over days dude! 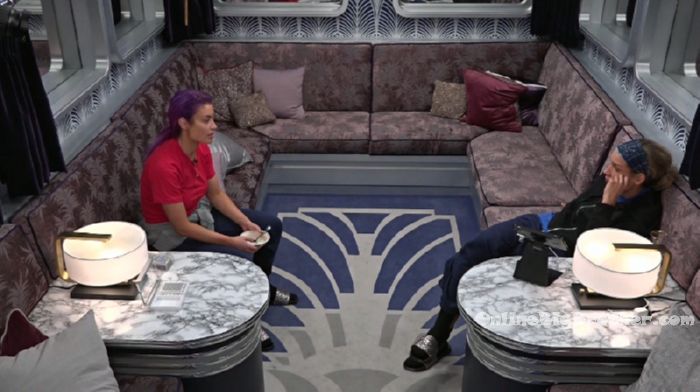 1:40am Joey to Tom – That was hurtful and very mean. Tom – yeah. Joey – In my house hold that’s how we talk.. Italian. Tom – I saw you holding it in. Joey – because I know my babies are watching so I am not going to take any bait. With Lolo either .. I am just not going to do it. I am just really glad because that can’t be rewarded with the win. I am just so glad you beat him. Tom – it happened to me too. Joey – I know. And I know we are all playing a game but I don’t have that layer to later say hey Tom bench press later? They can’t co-exist unless its methodical. I just really am just happy you won. If it wasn’t me, I am just happy you won. Tom – thanks! Joey – I mean it. Tom – I appreciate getting to know you in here. Joey – I can’t wait to record that song with you when we get out of here. 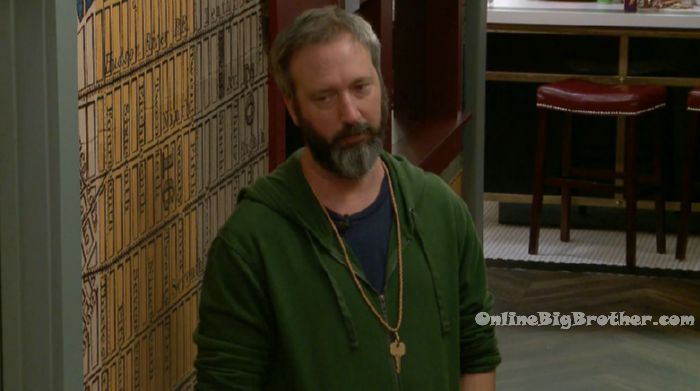 3am Tom talked to Ricky and Kato in the Head of Household. Tom is going to do One on ones today. Sounds like they are agreeing the best play is to put Tamar and Kandi up. If the Veto isn’t used Kandi and Tamar will be broken up if the veto is played joey going up is a real possibility.

The ability to give one houseguest the power of the publicist..
This power allows a houseguest to remove him or herself from the block at one of the next two nomination ceremony or Veto Meetings. Keeping them safe at the next eviction. This power can only be used once and expires after the live veto meeting February 4th.

Here is the CBS link for more information. https://www.cbs.com/publicist/

Wednesday’s show will reveal the results. Head to Twitter to cast your vote by tweeting the hashtag of the celebrity houseguest you want to receive the power of the publicist.

I WONDER IF CBS IS SETTING THIS GAME UP FOR A MAN TO WIN THIS TIME ROUND??

Could be. I know the only woman I’m rooting for at the moment is Natalie.

Sorry, I can’t get aboard the Loco and Natalie train….. 50 shades of cra…… then there’s Cra-mar, yikes! I’m looking forward to the bloodbath between the mean girls and the older dudes….. I think Ricky is gonna sneak on up to the finale and blow weed out of all their asses!

I am still upset about Jonathan being gone … and Ryan now too? Let’s get rid of the player threats …smart maybe but for us watchers it will be sad in my opinion.
I love Tom Green.
On the side, I haven’t seen Jonathan tweet yet. Hoping that there is a stupid twist that will bring back our boys!

Tom’s target is clearly Kandi. He does not want Joey out….YET.

Slicky Ricky has worked his way into the Tomato alliance like he’s always been with them 100%. LOL Should we call that Smoky Tomatoes or Tomato Daze or Tomato Weed. LOL ‘Snails MiGails” or something like that.

Thing is, Tom needs to make sure he keeps his endgame in mind and not allow Kato and Ricky to talk him into something else.

Tom is smart. He knows Kandi can be dangerous in the sense that she puts people on the spot to talk game, yet she plays everything like a sleeping giant.

As it is now, Tom says he wants to nominate Tamar and Joey, remove Joey with veto and put up Kandi. Bye Kandi. I, honestly don’t think a backdoor is even necessary.

Toying with Tamar like that is dangerous, though. She may rev up her hate and turn the target in her direction.

Dina is this season’s Victoria. Ultimate pawn, but much more emotional.

I hope you’re wrong about Kandi. Fingers crossed. I like Kato and Kandi. Kandi is the most normal, reasonable one in the house. Sticky, Cramar, and Duh Dina are just fillers in my opinion. Comparing Duh Dina to Victoria is spot on. Cramar wouldn’t even do part of the comp. she refused. I’m wondering where her confidence is coming from. Other posts are pushing Joey for publisher vote. If you are correct voting Joey is a waste. Thoughts?

Smart cast – got rid of Ryan the 2016 Olympics’ biggest Pinocchio. I don’t buy the “changed man” act and quite frankly he’s still kind of a dufus. Regardless, he was good in comps so there was that reason to evict him too. Cray-mar is very insane but they should keep her around because she can’t win sh!t and will defo implode at some point. Now… Dina, Joey… wake the eff up! Do something…

Hey Dawg and Simon! I had no idea you were covering CBB! Thank you so much for the sacrifice! I love your updates during the regular season and I am so happy to have them now. You two are the real BB heroes!

WE’re not covering CBB as complete as we do BBUS .

celeb bb vs bachelor vs agt the champions

Simon
Reply to  celeb bb vs bachelor vs agt the champions

they’re doing poorly on the ratings?

celeb bb vs bachelor vs agt the champions
Reply to  Simon

Papa Moon leaves the room and the boys start talking about Ricky being the real target.

who won the power?