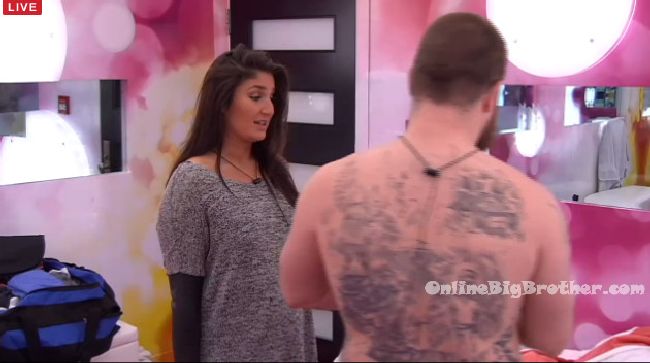 There will likely be a lot of alliances during the season – keep track with our -alliances/”>alliance help guide. 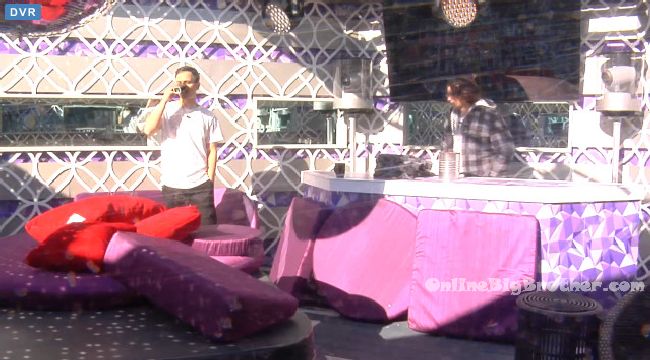 9:45am Hot Tub room – Jared says I wish he didn’t do this but Raul told me .. they were talking to that guy last night. Mitch says Emmett. Jared says yeah and Raul says its only been official for Joel to keep Dallas. If he wins, Raul is going up. And I’m the next logical person to go up next to him. Apparently after he said it .. it was just crickets. Jared tells Mitch that he put the fear of god in the brothers last night. It slipped my mind to tell them this. Jared says Maddy told me if it wasn’t Loveita it was the brothers she was going to backdoor. They were rattled. Mitch says maybe I’ll sneak that in there too. Jared says yeah do it to Phil .. it will freak him out. It will be really good for us. Jared heads inside and tells Mitch to plant that seed. 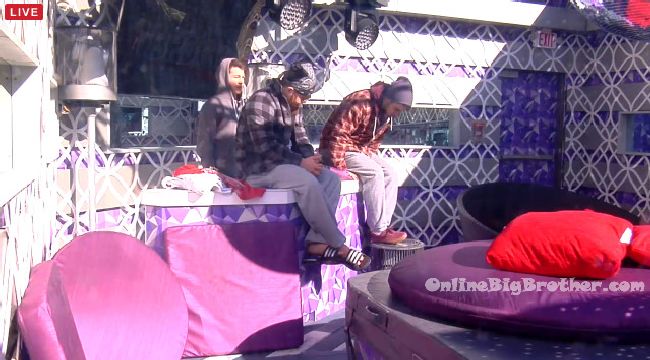 Dallas says whoever keeps me in this house you’ll have my vote or I won’t be nominating you. Whereas if Maddy stays and wins I’m pretty sure you boys will be up with Cassandra. I’m basing my campaign on putting those guys up and everyone can sit on the side lines for another week. Phil tells Dallas he likes him and does feel safe with him but other people don’t. Nick says don’t give up just yet. You know how the votes work. Phil says Tim in integral to this vote. He is the kingpin. If you get him, you get two, three more votes. You know what I mean.

10:30am Phil and Nick talk game while playing pool.


11am In the bedroom – Cassandra tells Dallas to even go out with a bang, this could help your game. If me, you, Tim, Ramsey and Maddy are all together. You should say to Maddy.. Didn’t you tell me the other day you were going after Cassandra. Dallas says I will. Cassandra says that’s the only thing that will save you at this point because I’m the only one on your side. The brothers won’t do anything unless Tim is on board. So we need to get Tim on board. Dallas says he’s disgusted by how Maddy is acting. It grosses me out. Eventually someone is going to need to take out Jared and Rual. Cassandra asks do you think Maddy is going to do that? Dallas says no, she had her chance and she blew it.

Dallas asks Ramsey if he got his pinky stinky last night (Sleeping in the HOH bed with Maddy). Rmasey says no, I’m not trying to do anything on tv. I thought about it though. Ramsey says she is pretty intense into me. She is telling me next level sh*t! Dallas says I am telling you bro she is playing you. Just like she did with Nick. Ramsey says that Nick was actually into her and I am telling you bro I am not.

12pm All the house guests except for Joel are out in the hot tub room suntanning and chatting. 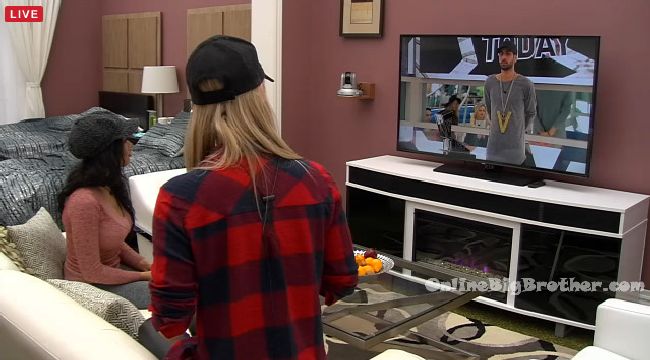 12pm – 12:30pm In the secret suite – Loveita and Kelsey discuss their plans if either one gets back in the house. Kelsey will talk to Joel in private and reveal that Loveita told her the night they were evicted they had an alliance. She says she’ll also resolve her issues with Maddy. Loveita says she’s get Jared and Raul alone to talk with and team up with them. On the tv screen Loveita and Kelsey get to watch the Power of Veto Ceremony from yesterday.

1:25pm Tim, Phil, Jared and Raul make food for everyone and bring it out to the hot tub room. 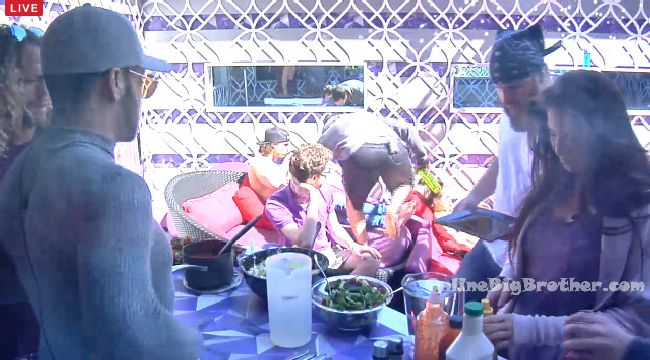 Last night Dallas revealed he hadn’t seen big brother canada one or two, but had watched big brother three (to Mitch during clean up of the blue room while Emmett was talking to white team).
His announcement of targetting Jared was a parrott of the Godfrey move last season. With that said, he could easily move his target to get Jared on his side and say but keep saying we will target each other and we’ll run the game.
Considering Jared has made final two deals with Raul, Cassandra and Mitch all in three days (so much for integrity?) he would go for the move.

No one should underestimate Joel at this point because of the position Mitch put himself in with his vote last week! He not only showed Joel his cards with the vote last week it will only solidify it more with this vote this week! – I noticed Joel has been very quiet this week within the house. Seems to me he has been regrouping and planning in his mind more which means good things are coming from him. He is a smart guy! Oh how I hope Loveita comes back! Mitch is no Dan sorry but Dan used other players for for the scheming and back doors not himself! That is where Mitch is going wrong and it is going to backfire really fast!

When the brothers tell Dallas that Tim is the kingpin of the house… are they listening to themselves? Sure, keep the house kingpin around. That’s smart.

On a personal level, Ramsey is the big stinker. I hope he and Maddy get dumped off BB asap.

Watching the Live Feeds today and Tim talking in the HoH with Nikki and Cass about how Joel will come running back to them if Dallas is voted out this Week. I hope Joel wins HoH and puts Tim and the Brothers up on the block with a back door plan plan. Joel will never come running back in a million years! Tim is completely delusional. Joel is coming up with a plan better than Tim’s.

Why does everyone want the brothers out? I like them and the different personalities they have. I hope they make it far and eventually get to play separate instead of this looming “one player” shit over their heads. Must be so stressful.
I also think Ramsey is a stinker. “Im not trying to do anything on TV but I was thinking about it but I am not into her”. Okay then. I cant stand either of them.