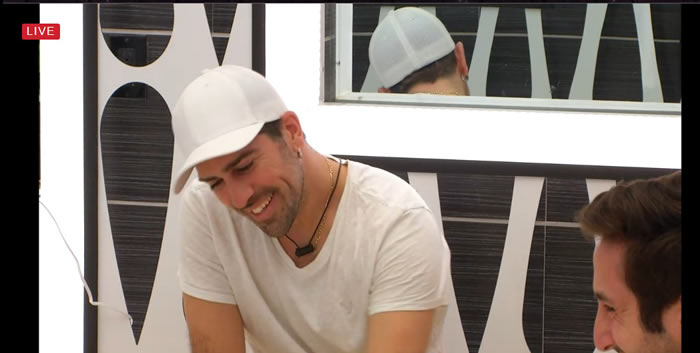 10:00am Sindy in the hot tub with Kevin and Bruno
Solidifying their season 3 alliance. Agreeing to never vote against each other.

Bruno about Dillon – He’s stubborn when he has an idea..
Ika – he repulses me, he’s so ignorant and so annoying
Kevin – we have to use Dre as the bigger threat (Over Demetres)
Bruno to Ika about emily/Dillon targets – you’re saying we should say you and Dre? Ika – yes
Ika explains that Bruno needs to push Ika and Dre to Emily/Dillon because if it’s not Ika and Dre it’ll be Ika and Demetres on the block. Then if POV isn’t played they lose a number.
Ika explains that they see Bruno and Demetres hanging out all the time if they push for Demetres it will look weirds .
Bruno will do it but it’ll feel weird he doesn’t like doing that.

Ika – Karen hates Kevin Oh my God
Bruno says Dillon is very head strong he’ll work on him. He thinks he can get Emily.

Ika says she never attacked Jackie no matter what she says she’s labelled a Bitch.

8:34pm Feeds were on for a short while then cut again.. Essentially down all day.

only the returnees except um…Ika to me!

Dawn or Simon for the winner

Please let someone from the other side get HOH next week..

Therefore I really hope Gary or Dre, which ever stays, wins HOH

I still can’t believe how quick the veterans alliance broke up, that normally never happens in Big brother!
By the end of this week 3 veterans will have been evicted and the other 5 IMO have zero chance of winning now.
Maybe Ika can make it to the final 2 but I don’t see anyone giving her the grand prize, despite her being my favourite, i don’t think people will vote for her! Maybe Sindy can make it to the end but it will be because of competition wins near the end and because the male veterans and neda will be a target before her! And I can only see her winning because she may have some big competition wins right at the end of the game, but no one is gonna think she’s some huge mastermind gamer!

Right now I’m either Ika, Emily or Karen for the win!

I’ve heard Ika complain that Kevin and Bruno, Neda and Sindy aren’t doing enough to take the heat off of Ika and Demtres when it comes to Dillon and Emily.
Gee, maybe it wouldn’t be so difficult if the two of them didn’t antagonize at every opportunity. Who did the two of them nominate this week? Who did they give slop cookies to? It’s pretty difficult to smooth over the tension when one of the sides is egging it on at every given opportunity.
Tbh, Bruno really isn’t trying to smooth anything over. He’s been secretly doing everything the other side of the house attributes to Neda. Neda doesn’t have an army, she has the alliance. Bruno on the other hand… he’s got the alliance, and he’s misting newbies into his own private little force. I think Bruno wants Ika gone because he fears she would end up a vote for Neda in the end, and Bruno is most definitely trying to quietly erode Neda’s ability to stay in the game. For all the talk about how sketchy everyone else is, it’s actually Bruno that is the sketchiest of all. When the six talk about who is closest to the newbies on the each side, it’s Ika and Bruno whose names come up as the closest connections. The fact the rest of them don’t realize those two have the greatest ability to cause chaos is to their own detriment.
At the moment, Ika’s getting sloppy imo. She’s getting too comfortable badmouthing her allies to each other. If she has another personality swap and annoys them again, they could very easily compare notes. If they compare notes, her goose is cooked.

Neda and her huge ego are so annoying. why would anyone give her safety. she has got to go. when she does, i will laugh … bye bitch..