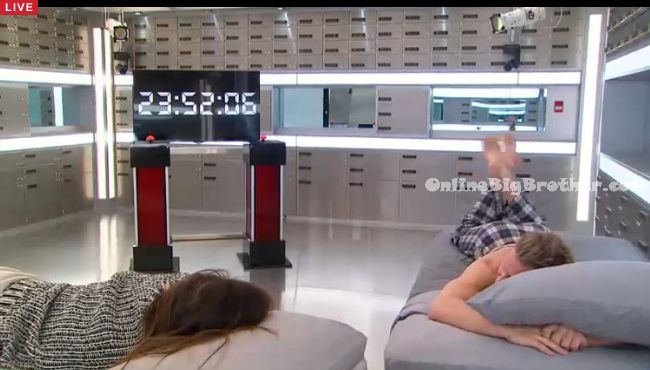 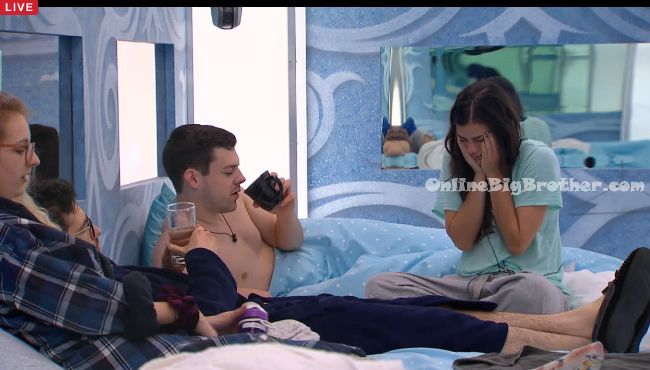 9:30am – 10am Big Brother wakes up the house guests. Big Brother cuts the feeds. When the feeds return Sarah comes into the bedroom with a fake “joint” for 4/20. She offers it everyone but Cindy and Bruno both decline. Bruno says I have to set a good example for my kids. Sarah gets called to the diary room. When she comes back they wonder if she got in trouble for it. Sarah says no and comments that she was cast as the stoner so they wouldn’t get mad at her for it. Kevin and Pilar start asking Sarah questions about weed.

Up in the HOH room – Zach and Ashleigh are waking up. They start studying the past events of the house. Ash says isn’t it funny that Bobby was so gungho to get Kevin out and now he’s totally switched tracks to wanting to get out B & Sarah. And how Bruno so so so badly wants to get out Sarah. Zach agrees and says some peoples targets can go up so hard and then .. Big Brother blocks the feeds. 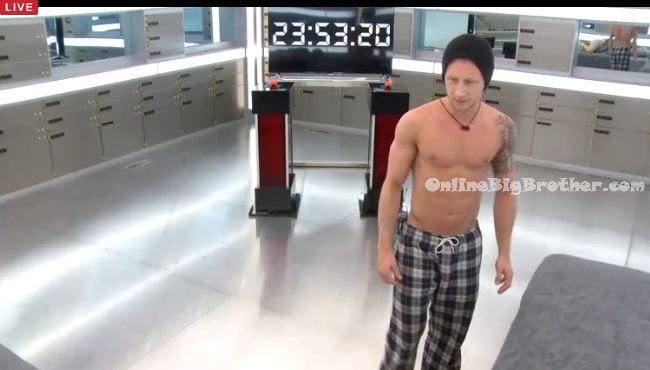 11:30am The live feeds return with Bobby and Cindy in the VAULT with a 24 hour count down. There are two buttons in front of the count down. Bobby says all I know is that the buttons aren’t a good thing. “I can’t take it any more” The wonder if they’re able to sleep in there. Bobby tries and Big Brother tells them nap time is over.

Up in the HOH room – Kevin and Jordan are talking game. 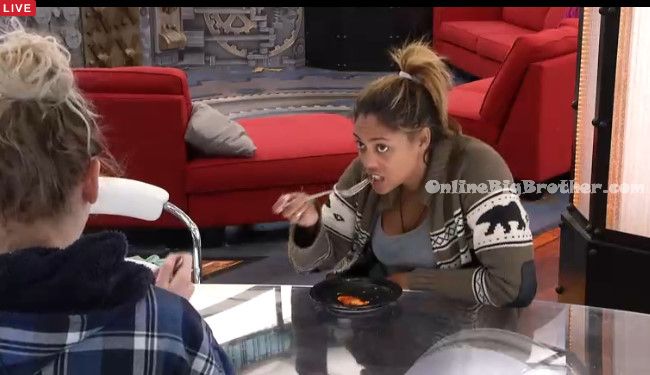 In the kitchen – Sarah and Brittnee discuss the option of throwing 3 votes to evict Jordan and then saying it wasn’t them. Sarah says Godfrey’s been saying he’s got 3 votes Bobby, Bruno and one other. Sarah tells Brittnee that Pili drives her up the wall.. If I have 10% of her its okay but any more than that I can’t handle her. Kevin asks what do you think they’re doing in there? Britt says making out. 24 hours of solitary confinement with someone of the opposite s*x. And with someone with abs like that! Britt yells that Cindy better not be stealing her cuddle partner.

12pm Zach and Bruno go up to the Vault and tell Bobby and Cindy to keep pushing. Have fun in there! We love you guys! Zach says they can’t respond to us. We’ll all line up and sing happy birthday to Cindy. Bruno and Zach head out to the Hot Tub room. Bruno tells Zach they have to stay close. They both agree Cindy has to go next. Zach reassures Bruno that Jordan isn’t after him and that if he (Jordan) won his target would be Willow. They’re not sure they can trust Willow. Bruno says she is playing it safe. If one of the girls wins HOH she’s safe and if one of us guys win she’s safe. Zach says she’s been throwing everyone under the bus and if she’s doing it to everyone else I know she’s doing it to me.

12:10pm – 12:35pm Out in the backyard. Willow and Kevin are running laps around the backyard. Ashleigh and Jordan are tossing the football trying to get it into the baskets. Out in the hot tub Zach, Willow, Sarah and Bruno are talking about driving, working, kids and other random things.

The feeds switch back to the vault. Bobby is working out. Cindy “So we can go to bed in 10hrs? I’m so bored in here” Cindy and Bobby talk about the buttons. Cindy says that superfans would be saying press it!!! They never said that button is an exit button. Maybe its a food button. Bobby says I think we’re meant to be tortured. Cindy says they should have put Godfrey in here he would have worked out the whole time. Bobby says he would have press that button within 10 minutes. Kevin comes to the vault door and yells at them and joking that they’re allowed to play the game BB took away from them.

12:35pm – 1:07pmAshleigh comes up to the vault and says BOBBY I’m better than you! I love that I can say anything to you and you can’t talk back. You suck at God Ball! She then says I’m done. I’m sorry, that’s mean you’re locked in there for 24hrs! 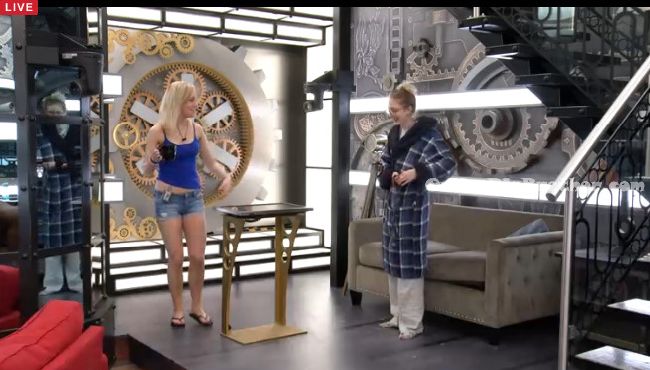 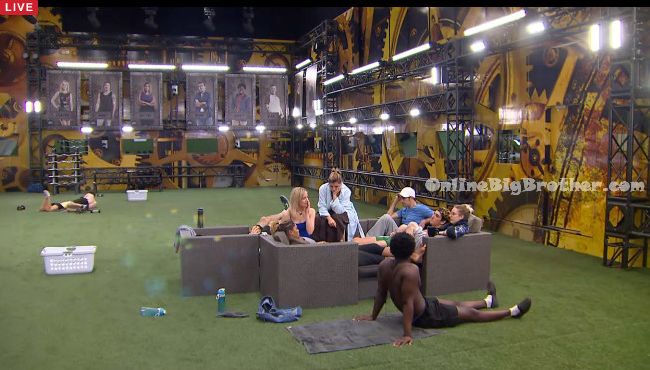 1:10pm The live feeds return. When the feeds come back .. The house guests are on a backyard lock down. Willow asks what did they say? Brittnee says “It should not be taken lightly!” Bruno says something is up! Sarah says maybe it was referring to the fact that it was way more intense than we thought it was going to be. Brittnee says yeah. Willow says like its not as fun and whimsical. Sarah says like maybe don’t pick the birthday girl! She laughs. Brittnee says “Or maybe they (Cindy & Bobby) have some big decisions that are going to affect all of us!!” The conversation turns to talking about twist that happened in BBCAN2 like when Ika shredded the other house guests letters from home.

Now Sindy has so much time to work on Bobby to get Jordan out. I bet she’ll use this time wisely.

I think I’m in the minority here but I’m pulling for JP really hard because as a RHAP patron it’s hard not to root for your own. But if not I just hope this season is good tv!

I’d only be rooting for JP if he was on the block with Zack.

i don’t remember BB saying anything about another twist happening this week? (refering to the vault)

does anyone have any info on what this is about?

Reasonably certain that this locked in the vault thing is a task with possible rewards/punishments/hidden immunity idols etc.

I think their best bet is to recline on the beds all day and hopefully get some cuddle time in. lol dumbasses

lol. after the double pov twist failed, bb doesn’t want this wednesday’s eviction to be boring as well.
They saw that Bobby wouldn’t change his mind, and since that’s the only piece of the puzzle preventing JP from being, they force him to listen to Cindy for 24 hours without ever getting interrupted.
BB might as well give the HGs a script, telling them what they want them to do.
This is ridiculous.

Of course they will hit the button and then the feeds will cut until Wednesdays show, BBCAN3 doesn’t give a crap about the live feed experience this season, they block everything worth watching.

Another twist so soon?

I’m not sure I buy it is for giving Cindy with an S time to change Bobby’s mind though. That would be a bit… scripted.

As scripted as removing to key characters in deciding this weeks eviction for 24 hours prior to that eviction?

why is BB screwing with people on their birthdays? and why so many having birthdays in the house not that i care its just that almost every week its been some one’s b-day and BB has messed with them in some way lol

I just hope Sindy can get it threw Bobby’s thick head that they need to evict JP. Bruno and Sarah need to have that sit down SIndy want to do (Bruno, God, Sarah and Britt) and compare notes and make an alliance

I think Sarah trusting Kevin could be her downfall. Kevin already telling jp about last night is telling if he learns even a little more about the possible jp vote it could be game over.

Simon, if possible, cancel my reply to Hann. I got my days messed up. Thought today was tuesday. :)

I like and rank the remaining players in the following order

Not sure why everyone thinks Kevin is top “Dawg”. It just seems that all he does is make out with Pilar (what a wasted player spot) and listens to JP. He doesn’t have his own thoughts or strategy but them maybe that is his strategy. He just annoys me when he sits with that stupid look on his face and says and does nothing! Only time he does something is when he has to play to take himself off the block. However, having said all this I guess there isn’t really anybody else in the house to pick as favs. Between the very noisy make out sessions of Z/A/K/P, Z/JP’s arrogance (according to them everyone but them are idiots), Brittany’s nasal voice, bobby’s stupidity,Willows stupid behaviour ( is she 3 years old?) and Bruno following Bobby’s stupid ideas there isn’t much to choose from this year.OMG! A very boring BBCan this year!

JP stopping playing with your beard! Either shave or leave it alone! Kevin you are poker player isn’t this a tell that JP is either lying to you or telling you the truth? Either way quit playing with the beard!

I’m so confused though how did those 2 get locked in the vault and why them? (I don’t watch the feeds…..or was it blocked and nobody knows/saw?)

i’m trying very hard to keep the cynical part of me in check right now. the production conspiracy theorist in me is screaming in the back of my head that the powers that be have successfully separated the five people that could put Zach and Jordan’s games in complete peril. if the five can’t get together they can’t form a block to evict Jordan, so Zach is safer. who will Bruno listen to from the girls’ side? cindy. who will bobby listen to most? Bruno.
britt and sarah have tried to talk to Bruno before. didn’t work. that convo led Bruno to the sarah’s a flipper thought, and fueled his sarah’s dangerous perspective. bobby has only actually followed the advice of one woman in the house: Ashleigh. other than that only guys have really been able to get into his head at all (Zach and Bruno). So if production is still hyping Zach they’ll continue to do so until jury. best way to keep Zach intact is to keep Jordan. so lets keep the people that could endanger Zach and Jordan from speaking to each other until just before eviction.
yeah… as I said, i’m trying not to give in to this cynical thought, but it’s still there.

Well, experience is telling me to go with my cynical side on this one. Big Brother has a very long history of fixing, rigging, scripting, tailoring, “suggesting,” etc., all kinds of things to the house guests.

And, with BBCan3’s very poor ratings this year, especially after their switch from Slice to Global, they’re in desperate straights to raise viewership or face a very early end to Big Brother Canada altogether.

Right now, it all rests in the hope that Bobby will smarten up and listen to reason. Yeah. Good luck with that.

I’m curious to see the ratings where are those posted?

I think it’s just a task. their screwing with them. The sooner they press the button, the sooner they get a bday party or something.