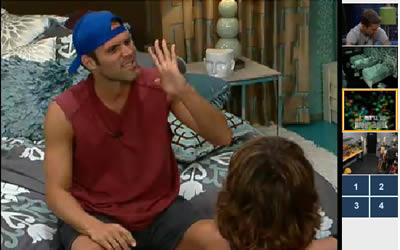 4:15pm HOH bedroom Enzo, Hayden and Lane. Enzo is convinced that they’re best chance of success is to back door Annie this week and send her packing. Enzo suspects that Annie is the Saboteur and evicting her will remove the twist from the game this season. Hayden is reluctant about getting rid of Annie there will be too much blood on his hands, because he was the winner of the HOH whoever gets evicted will be his fault. Hayden pushes to have Kathy put up and they take out Annie next week, Hayden feels that Kathy has no allies and nobody will care if she gets evicted. Enzo reminds them that Annie is in with Rachel and Brendon, he also thinks that Ragan is trying to play the middle. Lane thinks Ragan will move towards the girls sooner than later. He suggests in order to protect their “secret” alliance he will vote with Brendon this week. They go back and forth about who they should backdoor. Sometimes it’s Rachel sometimes it’s Annie, Andrew or Kathy. They kind of agree to evict Rachel this week then Ragan followed by Brendon (they’re so certain they can win HOH its funny) Hayden says he’s freaking out about next week, because he won HOH this week he cannot play in next weeks HOH competition and everyone in the house now thinks he’s a super competitor and will be targeting him for eviction. 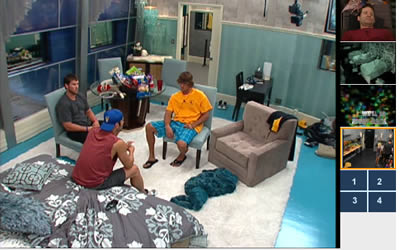 4:30pm Have Nots room Matt and Ragan, Ragan brings up how he’s not 100% sure he can trust Hayden he’s acting cagey since he’s been HOH. Ragan won’t pass judgement until he’s seen Hayden without the HOH around his neck. Both of them wonder about Kristen she seem completely uninterested in the game. Matt thinks it’s either a sign that she’s clueless about the game or she’s holding her cards close to hear chest. Ragan brings up a conversation he’s had with Kristen.. she was slow to warm up to him but he was able to talk about to her personally. He thinks she’s smart but is playing like she doesn’t care about the game. Ragan suggests they try and get closer with her he thinks she will be a valuable ally. They both seem unsure about who they can trust. Matt tells ragan that he’s keeping his friends close and won’t make any promises to anyone, he tells ragan that he considers Monet one person he can trust. Ragan Agrees.

Everyone laying around the house sunny themselves. Lane and Ragan are working out, Lane Flirts a bit with Annie. Annie jokes saying he shouldn’t flirt so much in front of the live feed cameras people might start getting the idea they are in a showmance.

I think it’s a little early in the game to assume they have all the power. I can’t wait to see who gets the next HOH.

ILL WILL
Reply to  Simon

Simon
Reply to  ILL WILL

remember bb9 with chelsia’s group.. they totally thought the game was won… they were decimated

i would just once like to see the girls stick together and kick out the boys,they always lean on the men ,then the men treat them like shit

Mighty Mouse. ” here i come to save the day” Love it. He was always flexing and thought he was all that. LOL Yeah I think we’ve all had enough