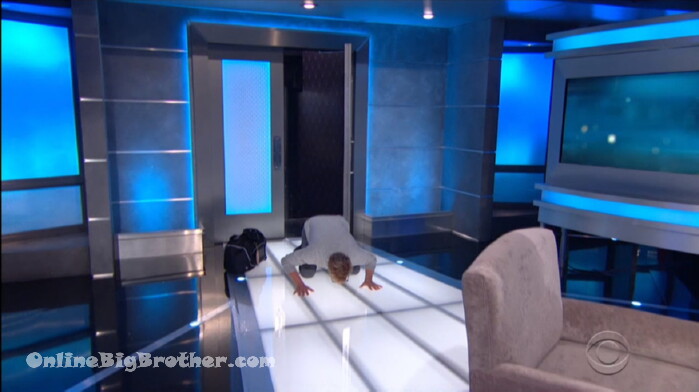 Catching up on the Big Brother Spoiler

Tamar won the Head of Household Competition and nominated Tom and Kato. This was following the drama on Friday with the implosion of the Tom/Kato/Ricky/Natalie/LOLO alliance. It all started with Tom’s HOH the week before. Tom wanted to knock Ricky out of the house. Natalie Eva Marie and Lolo wanted to stick to their original 5 alliance. After the introduction of the publicist power Tom gets a bit crazed off the HOH juice. A HOHitus Tom coupled with LOLO’s shortfuse helped aloong the breaking apart of the alliance and resulting  Tom and Kato being house enemies.

There was a couple days between when Tamar won the HOH and the eviction tonight. This didn’t give Tom/Kato much of a opptuntity to improve their positions. (A LONG shot due to the compressed Celebrity season) Tom thinks maybe he should play defeated to push the target onto a stronger player. (Natalie/LOLO/Ricky)

There were some conversations last night with Dina, Kandi, Tamar. Sounds like LOLO and Natalie are high on their list to evict AFTER Tom/Kato are broken up. The probability of Tamar to use her power is remote. 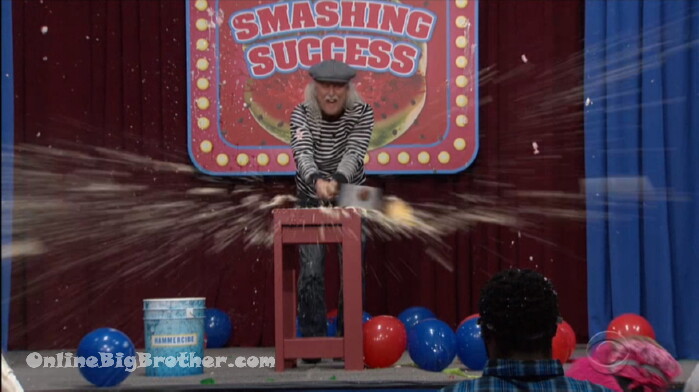 Veteran comedian Gallagher smashes fruit, food, lotion etc..  splashing the houseguests with debris. It is a Routine the will be questioned on for the Power of Veto Competition 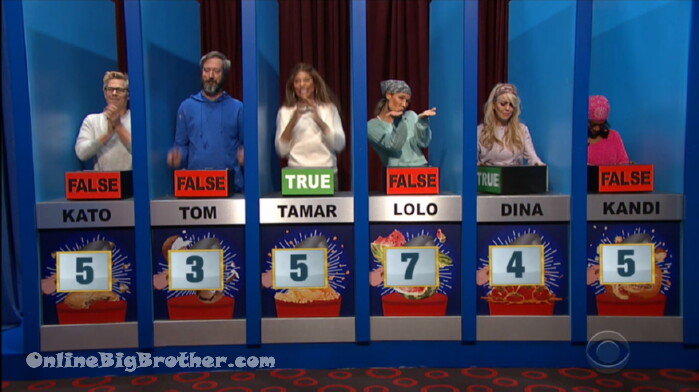 LOLO Wins the Power of Veto 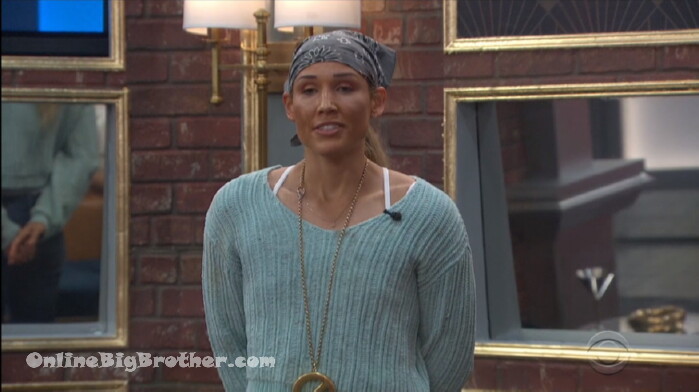 LOCO Doesn’t use the Power of Veto 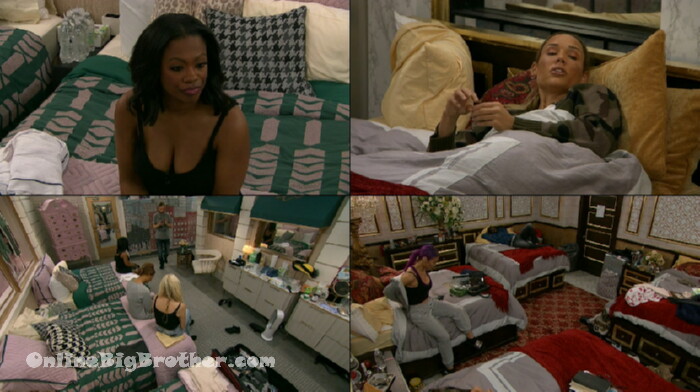 7:12pm Live Feeds return.. They’re waiting around for the head of Household Competition to start. 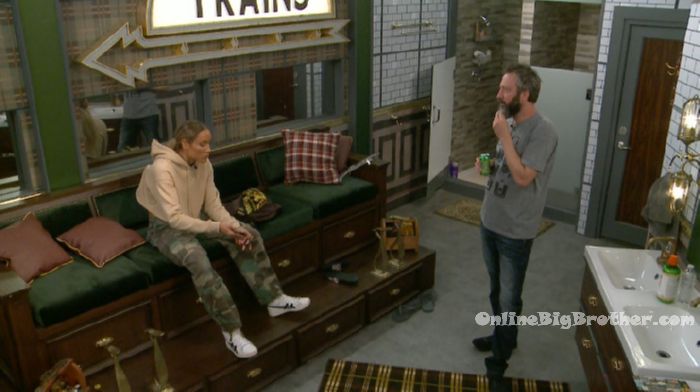 8:17pm Bathroom. Lolo and Tom. Lolo – just promise me you’re not going to go crazy again if you win again. Tom – No, No, I learned my lesson. Tom laughs. I’m not even sure if I want to win again. I don’t want the responsibility. I was sincere when I told you I want to get to the final four or something like that. I mean obviously I am going to try and win but its not like there’s this burning desire. I just didn’t want to leave early. Lolo – well that’s how we took it. I thought you were sincere in that but when you won it was .. it was crazy Tom. I couldn’t keep up with what you wanted. It was too much for us. We would have stayed true but it was too jumpy jumpy. The night that you interrogated everyone and then you interrogated me… Remember when you had your plan. I was like this is commendable. And then you went to we’re going to do this, and this, and this, and then back to this. I couldn’t … I was like am I next. Then we got in that fight in the gym. I think if they hadn’t introduced that power during your HOH, it would have been different. Tom – the thing that I realized is that I was wrong about what people were thinking so much. Like today, I was sure I was the one being voted off. With the rest of my time here I just want to not worry about winning. Have fun and be nice to everyone. Lolo – also you need to entertain everyone too. Well not us but America. Tom – for sure. Tom explains why he went around to talk to everyone about whether or not they had the power. He says he was doing it more for the show. Thinking for editing they needed the HOH to go around talking to everyone trying to find out if they had the power, while also trying to be funny. Tom says he is just now realizing how that came across to the other house guests. Lolo – I can see that now how you have that television experience. 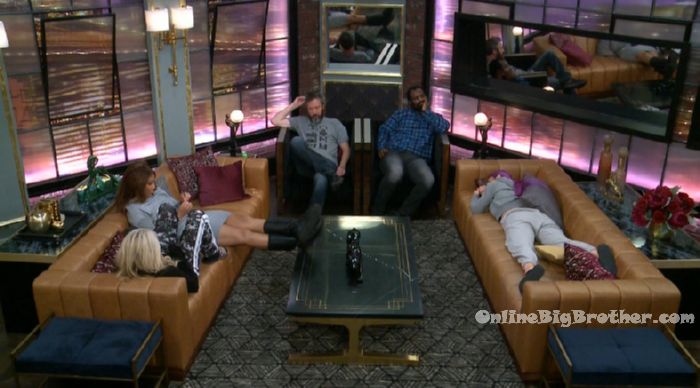 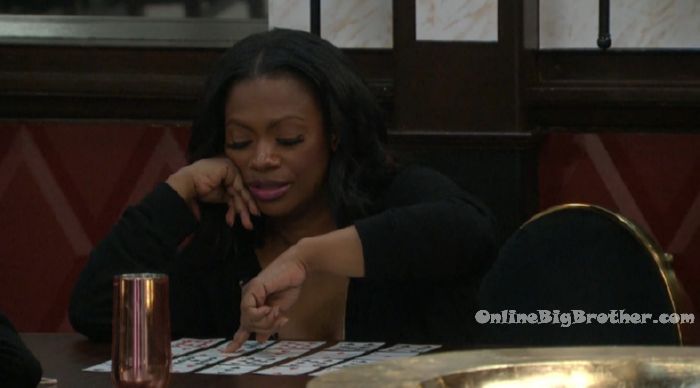 9:38pm Kandi using the cards to memorize study the dates and events of the house with Dina.

10:38pm Big Brother blocks the live feeds for the HOH competition… Its going to be a late night..

No Longer Literally, But FIguratively

Some fake people in that house (watching the live show tonight). Hoping they show the HOH tonight on After Dark. Thought it was funny that they tried to bear hug Kato and he distant hugged them instead. They were acting up for the live show. I really hope Kandi, Dina or Tom somehow win HOH and put two of Ricky, Lolo and Natalie up.

Dolly
Reply to  No Longer Literally, But FIguratively

Vikki
Reply to  No Longer Literally, But FIguratively

Did you guys hear about the Swaggy C charity event for Kevin where Swaggy kept just about all the money for himself?? This is totally out of left field, sorry… but I think all BB fans need to hear about this. Cancer is not a money machine. >:-(
F*k cancer and f*k Swaggy.
https://soapdirt.com/big-brother-swaggy-c-fessy-take-cancer-money-kevin-schlehuber-family-outraged/

I did the mistake of reading up on this Scandal yesterday and seeing a bunch of people’s opinions on twitter.

No Longer Literally, But Figuratively
Reply to  Simon

Dawg
Reply to  No Longer Literally, But Figuratively