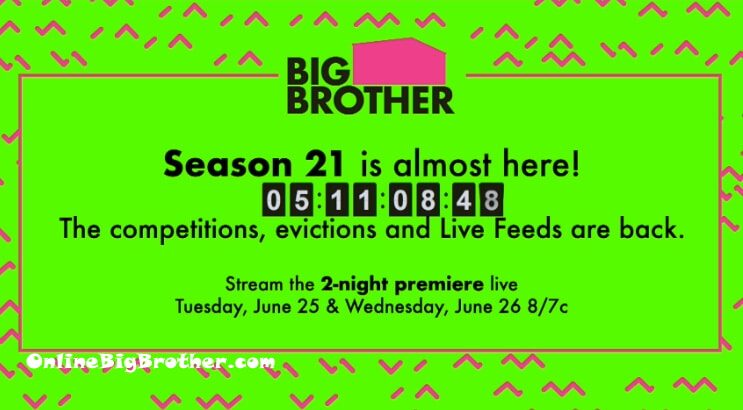 Lucky for us feed watchers there was an audio leak today at 9:38:33am. Just in case you didn’t know the hosueguests move in a week before the live feeds go on. Givers everyone a chance to get adjusted and means we miss out on pretty important stuff. We learn that Christie wins the Head of Household. There might be a person excited already but I don’t know for certain.

First, if you don’t have them yet grab your feeds. Live Feeds Stream 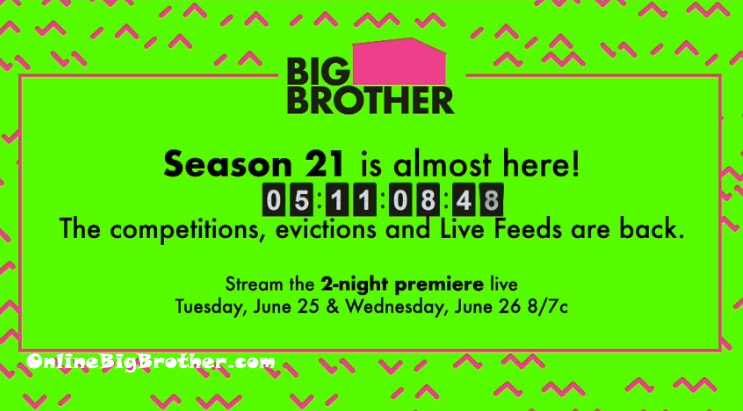 (Christie and Nicole conversation I believe. I’m trying to figure out who is saying what… )

9:38:33am Head of Household Room
A – These stairs are still hurting my hammies.
B – First day the spinning..
A – we got to feed the fish. these poor fish are going to die from neglect
A – ho was the rest of your night
B – it was good I umm.. I haven’t been called to the DR yet .
A – so you literally have to put the outfit back on
B – I do

B mentions how Cliff woke up and was like “Girl you have to put the outfit back on”
A – it’s going to be permanently imprinted on your skin
Christie says how she had a mini breakdown
Christie – today was fun but literally today or the next day sh1t’s going to get real and I’m not ready for it.. I’m so sad I just don’t want to do it
Christie – listen first HOH is always sucky, yes it’s great because you are safe the first week in the house that part is great.
Christie – it sucks because you literally have nowhere to base your nominations.. you can’t base it on strategy because I feel like no ones … I mean listen I don’t know who’ talking or not but no ones aligning yet.. there are no threats. Everyone is like you have to do what’s going for your game but and this point how do you know what’s good for your game. I like everyone
Nicole – no one is going around ragging or screaming (c’mon people start it up)
They agree it would be easy if there was an “A$$hole” or if a line “had been drawn”
They talk about how yesterday they all bonded “so much more” Christie says she was breaking down in hives because she cried so much. Christie mention show Tommy told her to explain to people how awkward being the first HOH is.
Christie – we’ll all be in the same boat eventually.. I’m HOH, but yeah so.. ”
Christie laments how she’s nervous she can’t play in the next HOH.

Christie “I don’t want blood on my hands.. I don’t want a chunk of people upset with me I want to nominate the people that have the least band together.. the least people attached to them.
Christie goes on how she doesn’t want people coming after her, “I also don’t want to nominate 2 boys or 2 girls, I want to split it up and do a GUY and a girl. I just feel it’s fair I don’t want to piss off the guys or the girls
Christie – I think boys are more dangerous because they form these bro alliance.. f*ing 30 seconds in the storage room and those are the ones that literally going to the end (HAHAHA like BBCAn7 .. it’s going to be a “literally” type of season
Christie – I’ve seen it so many seasons.. Girls say they are going to stick together girl power than emotions get involved and they crumble. Boys are dangerous
Christie – between us if I had to say who do I trust the least, yesterday morning I would have said I don’t know but after talking to a few people and hearing .. apparently Nickey had promised .. the four people that volunteered, in the beginning, made a pack if they got it they weren’t going to pick any of them(got it = HOH) because they stood up and volunteered
Christie – Cliff and Jess both told me that Nicky went and nominate all three of them.
Christie – he didn’t burn me obviously .. to look someone in the eye.. to me that’s dangerous. If I was anyone of them three I wouldn’t trust him
Christie says if she wanted to base her noms on that she would put Nick up, “but I’m also scared of him because him and CAT have a thing and him and Jack are very close.. he’s also a physical threat”
Christe says enough people don’t trust Nick so he can be someone else “victim”

Christie – so Cliff, it literally broke my heart but I straight up told him like.. .he’s Definity an option for me and I love him so much but I have faith that whoever he’s up against I don’t think he’s going home. I would never vote him out, I spoke to SIS, I spoke to Bella, Holly, Tommy. All straight up said they would not vote Cliff out.
Christie says she gave him her word “I respect you I don’t want to embarrass you in front of your wife and kids I don’t want the first guy out to be the older guy
Christie adds that OVI told her he wouldn’t vote out Cliff

Christie adds that she never talked to OVI about it, she saw them playing pool and OVI said “I got you” (LOL)
Christie says for girls she likes them all but “feels” for “her” she has nothing to base the decision on.

Nicole starts talking about having sicknesses (shi1t another raven)
Nicole and Christie have a bit of a one on one.. Nicole goes on about how the girls in the house aren’t the type she would normally associate with calls them the “pretty girls”
Christie says her “soul” is so much like Nicole’s

Christie tells her the last relationship she was in lasted 7 years and it was with a woman.
Nicole – Ohh
Christie – so I don’t like these boys.. they may think I do and eventually when I have one on one conversation I will tell them it’s not something I’m like LESBIAN like … it’s just. it’s not a secret
Nicole mentions how guys gravitate towards her so if she tells them.
Christie – Guys like a challenge..
Nicole laughs
Christie says it was 7 years and her only relationship with a woman, “yes I date women now.. I did have 2 serious boyfriends.. I did have 2 ex-boyfriends”
Christie says she doesn’t wave her rainbow flag she’ll tell people when she feels cool about it, “I’m not coming into the house playing my sexuality thing”
Christie – I’ve told 2 of the girls 3 of the girls./. I see a soul I don’t see gender
She goes on about how she doesn’t hang out with “boys” and “hot people”
Christie – I work,., I hang out with my dog and my two awkward friends.. we smoke pot and drink win (replace wine with Kraken)
Christie – we light a fire and we sit on my deck.

Christie mentions “imagine if the house was full of guys like Nickey” adds “on a power trip”
Christie – and all the girls were Kats (Kathryn) .. you know what I mean
Christie to Nicole – I’m good with you. Do you feel close to anyone yet?
Nicole – I try to talk to everybody
They agree “Jess” is a “really good person”
A guy comes in to use the shower (OVI)
Christie says “I shoot is straight, I know who I don’t want to nominate”
Christie- You, Jes
Christie tells the guys she won’t nominate him either
Christie goes on about Cliff being a pawn.
Christie goes on about not having a target all she has to go by is a person that is “instilling negative energy”
Christie – the only person that is installing negative energy in this house the short 3 days is Kat and that’s because I feel like her paranoia is rapid

Christie – she follows me into the room, I know you are going to nominate me. the first sentence that is out of her mouth is Are you guys conspiring against me
Christie – all she talks about is her medications. I don’t judge I was on anxiety medication I don’t judge it

Christie – she’s (kat) is freaking out literally the moment my feet touched the floor in the HOH competition she literally ran to me I know you are nominating me because I fell down first. me and Jack
Christie – I was like Girl I’m literally covered in slime right now I don’t know. I have no idea.
Christie – I feel like she literally hand delivered herself on a platter and I will literally use that as my thing.
Christie says that Nick was on the floor counting his abs in front of her “I’m not stupid I know they’ve hooked up”
Nicole mentions seeing Nick and kat in the bathroom laying on each other
Christe says that even Nick is saying he wouldn’t mind keeping Kat around because she’s a number for him
Christie adds that Kat was mentioning to him that they were in a showmance and Nick was like “are we in a showmance already”

Last Friday before the feeds start! Loved it that they gave us this leak nice to have some practice getting back into the groove. (BBCAN7 doesn’t count ;) )

Many of you have expressed concern about the moderation in the comments section. This year we are allowing the community to self regulate with the inclusion of a “flagging” system

If you see a post that is Bad. Flag it and if enough people flag the post gets unmoderated and we get notified.

My gut is saying if Cliff goes up he’s going home.

Yep! She said she really wants to put up (Jackson or Nick), but she will leave him for others to take out (she is gaming….good). I bet she will put up Kat and Cliff.

Even though Christie feels Cliff will be safe, he is an easy eviction since he’s the odd man out. HG’s don’t want to piss off others and will likely vote with the house to keep the waters calm. If Christie wants Cliff in the house, she can’t put him up.

The fact that he’s already the easy pick for the block even if people say he’s safe does not bode well for a long run for Cliff. Cliff’s the 3 legged gazelle on the savannah.

Maybe if Cliff had a daughter in the cast as well he would have a chance…..

He needs something to hang his hat on…I just hate that it seems the older guy (I’m not sure there’s been an older woman) is always so much of an outlier. The generation gap is brutal in Big Brother.

If she really dislikes Kathryn and Nick then why not nominate them both and say they are a budding showmance which isn’t good for anyone’s game?

Because if she does do Cliff and Kathryn there is a chance Nick will get to play Veto and could save Kat. Not to mention any other number of people that may be close to Kat and or a twist.

I’m from the future and I can tell you the winner of BB21 is Nicole.

Eww then I gotta do some Days of Future Past sh*t because I don’t want your future!