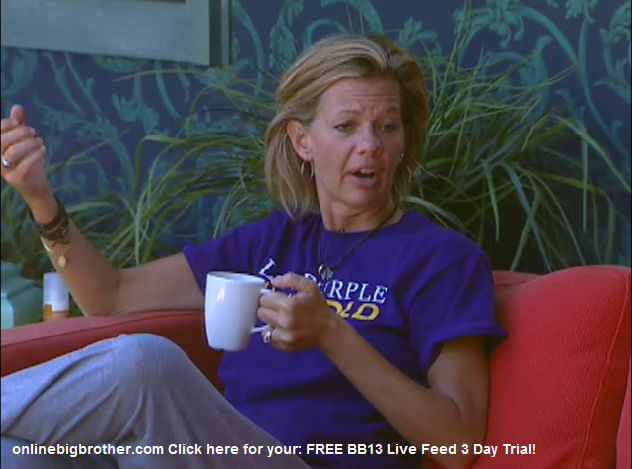 8:55am – 9:40am Brendon and Shelly wake up and go to change their batteries and then Shelly heads out into the backyard. Big Brother then wakes up the other houseguests. Only Brendon, Shelly and Rachel are in the backyard. Shelly asks Rachel if she had fun last night. Brendon tells Rachel that he tried requesting songs for her this morning for the wake up songs …but they didn’t have any of the songs. Shelly tells Brendon that they did good last night, it was cute …she really liked it. Shelly heads inside. Rachel says that she is going to talk to Lawon today. Brendon says baby it doesn’t matter. Rachel says that we can offer him the deal of a life time .. we can tell him that he is safe with them … as long as they are in the house they will never go after him. Rachel says that she doesn’t think Jeff will put Dani up. Rachel says that she doesn’t even think that Shelly will either. Brendon tells her that he doesn’t want to sour the relationship with Jeff and Jordan by campaigning behind their backs. Rachel says that she knows Jeff made a deal with Dani… last week he was so mad and yelling at her and now he is laughing and joking around with her …making her food… I guarantee they have a deal. Brendon says that they have to trust someone in the house because if they can ..they are just shooting themselves in the foot.
TRY the Live Feeds for FREE!
Click here for your: SUPERPASS – 3 DAY Trial! 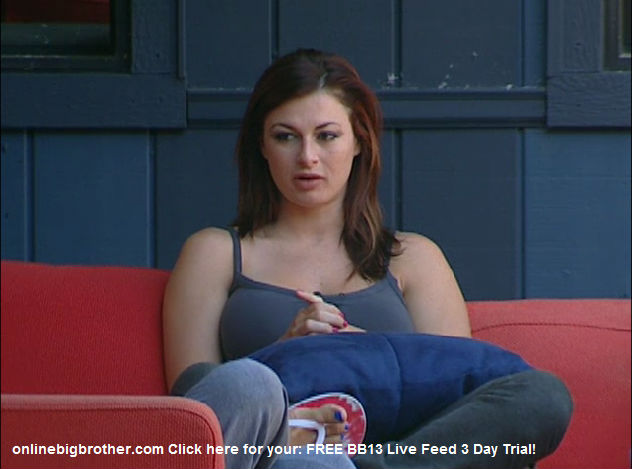 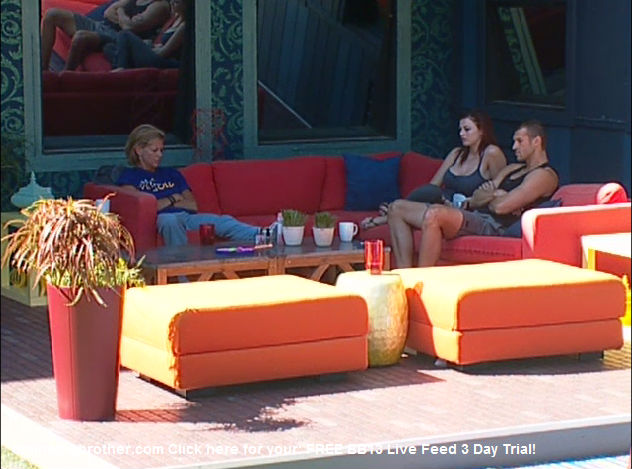 daniele knows every single secret passageways in this hous

rachel and brendon are so dumb

Hahaha..secret passageways? If Rachel knows about them and Dani knows about them, they aren’t much of a secret are they? Rachel and Brendon will say anything to feed their delusions. I’ve never seen such a weird couple before in my life.

On a sidebar, has anybody noticed CBS is showing the previews to tonight’s BB show and Dom is still in the commercial, why? Are they just messing with us again?

last week they were still showing commercials with ED also. Maybe for ratings because Dom was a fav

Rachel hates milk. She says it gives her bad gas.

ILL WILL *Cult of Personality*

TO Hell with The Whining Pity Party Simon
Reply to  ILL WILL *Cult of Personality*

Eripaul
Reply to  ILL WILL *Cult of Personality*

Rachel Is Boy George
Reply to  ILL WILL *Cult of Personality*

bb13 sucks
Reply to  ILL WILL *Cult of Personality*

bvan
Reply to  ILL WILL *Cult of Personality*

Chessie_K
Reply to  ILL WILL *Cult of Personality*

Dani is doing good by breaking up the alliance and getting Brenchel to second guess Jordan and Jeff. Love it, now we can finally see some drama!!

ILL WILL *Cult of Personality*

pot, the tea kettle is calling you black again

Jpowell
Reply to  ILL WILL *Cult of Personality*

Absolutely, shelly is being so naive. If she actually thinks that she’s gonna do better in this game going with Brenchel instead of Jeff and Jordan, she is sadly mistaken.

Shelly said she’s afraid of Jeff’s temper. Good to see people in the house notice it. He’s a freak.

Based on what you’ve seen the last couple of days, who do you think will put up Dani if they win HoH? I know Rachel for sure. Anyone else?

All but kalia & Lowan, maybe Adam too but I doubt.

The other Jeff
Reply to  MATT

Exactly what I’m thinking, too.

Hello eveyone! First time posting. Been coming here for the last few years and think this is the best BB online site. Simon and Dawg, thank you for your hard work….your site keeps getting better and better!

Douchy and the Beast have some time to F-Up and put a bigger target on the Beast.
Other thatn that it depends on how Shelly flips or if Porsche does.
If Douchy stays:
Douchy
the Beast
Shelly (She will throw the HOH, not that much of a threat.)
Jeff
Porsche does what the Beast tells her to

If Jordan stays (If she doesn’t those are some dumb ass newbs, take out the bigger threat every time, especially if blood is on Dani’s hands.)

Jeff
Jordan (maybe not, she is the smartest at strategy… listen and pay attention. I think she fakes dumb. Blonde, southern accent (no offense people equate southern with dumb, some people do. So why not play it up. That is a good social game.)
the Beast
Shelly (She will throw the HOH, but Dani is the only Vet that does not buy Shelly’s load of crap.)
Lawon and Adam it is a numbers game for them go with the house
Porsche does what the Beast tells her to

Lol you are so right about that!!

Jordans votes are: Kalia, Jeff, Lawon and Adam… Douchy votes are the Beast and Porsche … Shelly someone is going to be pissed at you…
your cockeyed straight shooting is going to miss big time… game over.

Someone please clarify this: Is Shelly working with Brendon&Rachel or with Jeff&Jordan???

Shelly is a “straight shooter” that means she’s lied to everyone in the house with the exception of JJ. Shelly would sell her child’s organs on her next business trip to china if it met JJ were able to stay one extra day together in the BB house.

Hahaha!! thx i understand now. I thought she was swinging sides..

She’s with JJ 100% but she wants to keep saying sweet things to BR so the a) she’s seen by them to be on their side or at least sympathetic & b) so BR will not be aggressive in looking for votes which would expose her.

I thought they made a very strong case to Shelly about Jordan. Someone has to take her out and I don’t know who will since she’s such a sweetheart. They said she was on the block 4 times last time she was on the show and survived them all. She’s nice to everyone and doesn’t seem like a threat… she can go far again.

rachel:ive been told im the most fierce competitor to ever play this game

Brendan and Rachel are in a conversation about tempers? Now we’re seriously talking pot meet kettle.

Jeff’s temper is 3 times bigger than Brendon’s or Rachel’s. I’m surprised he hasn’t beat up Jordan yet.

You probably like him because he’s “hot”? He gets into these moments where he fumes, swears, throws threats around, and he actually looks violent.

No, I’m actually neutral where he’s concerned, but to say you’re surprised he hasn’t hit Jordan yet is unnecessarily over the top, imo. I’ve watched him his season and this season and he’s never once looked violent. Puh-leeze.

I think you wanna bang him.

Shellys alliance is everyone in the Bb house lol

Dani is defintely wise to Shelly’s game. I also think that Kalia, via Dani, and Porsche know she’s super shady and going around telling everyone what they want to hear. Shelly isn’t as smart as she thinks she is. Yes, she’s playing the middle which is usually a good place to be, but she’s gonna get exposed soon no doubt. People doubting where she really is in the game as far as an alliance actually makes her, in my opinion, even more of a target.

I hope Shelly tells J&J about this convo! Jeff will go nuts especially the part about him choosing money over Jordan!

I’m loving the ‘Straight Shooter’ nickname for Shelly, btw:) Seriously not trying to be mean here, but I can’t help it; Shelly eerily reminds me of Meg Ryan… if Meg Ryan was a down on her luck truck driver.

things are going down and shelly might be with Brenchel anything can happen at this point ……………….love this game so much

If this idiot Shelly evicts Jordan on this week and not Brendon, then I am not watching this show anymore. Jeff and Jordan are the only ones on the whole this season that make this show worth watching and really want to watch Rachel lose it when Brendon gets kicked to the curb. That would almost and I do say almost make this sad show this year worth watching for another week. Hope CBS gets a brain and makes sure that Brendon goes home this week.

I respectfully disagree with some of you. I do find Rachel annoying and overly emotional, but I find Brendan emotionally abusive toward her between vailed threats about their wedding and emotional blackmail. He knows how to push her buttons and emotionally bully her. I truly hope she doesn’t marry him.

Brendon is a control freak. Taking from George Carlin, Brendon sees anyone who drives faster than Brendon as a maniac and anyone who drives slower than Brendon as a moron. Only Brendon knows the perfect speed. Of course this attitude applies to everything in Brendon’s life. In Brendon’s mind, there is only one way to do something and that is his way. I think that is why he feels compulsed to explain how things are so often and I think he truly gets anxiety when people do not follow his logic on how life should work. Rachel is all about being the center of attention. Her whole self-worth is based on how others perceive her. Cassie’s remarks to her right before she left were dead on to cause the most emotional damage to Rachel. These are the perfect people to mess with.

They said that Dani doesn’t play with emotion… but I thought she was pissed about Dom and is plotting to sending either Rachel or Brendon home since she wants to split them up for the summer!

Mad grenades going off! What I could make of it, Dani sent a shout out in her HOH blog to Shelly’s family. Rachel got pissed and went off on Dani. She said she isn’t allowed to do shout outs and she used it to bribe Shelly. Or something irrational like that. All Brenchel’s campaigning and throwing JJ under the bus came back like a boomerang and before feeds cut Brenchel was talking about leaving together, blaming production for sending Rachel up to confront Dani for doing the shout out. Maybe both of them will leave and they can bring back Dom and Cassie. LOL