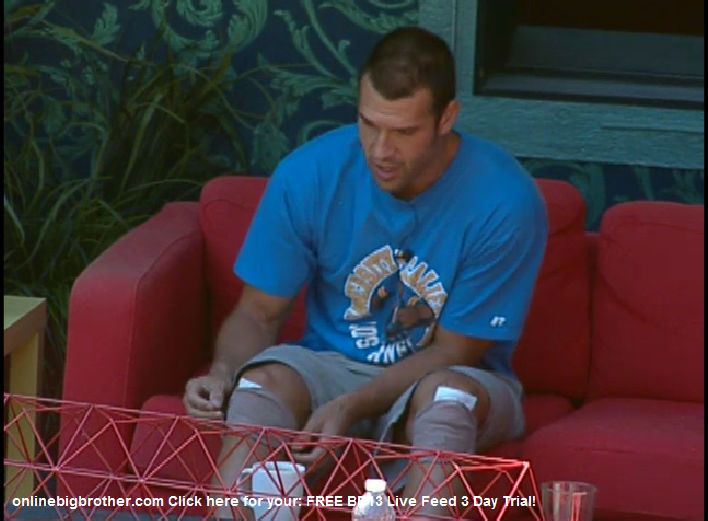 9am Shelly wakes up and goes out into the backyard. After a half hour Big Brother asks Shelly if she can you go inside for a few minutes while they fix some things outside. Shelly says okay and heads inside. At 9:35am The indoor lock down is over. 10am Big Brother wakes up the other houseguests. Brendon heads out into the backyard and talks to Shelly about the wake up songs and his banged up knees. Adam joins them. They talk about their last names, what they mean and where they came from. Shelly tells Brendon about how last night there was a lot of drama and stuff. They talk about how Kalia cries and complains about everything. Brendon tells Shelly that he and Rachel were going to let Porsche squeeze in their bed but that production wouldn’t let her. Rachel joins them out in the backyard. They talk about what happened last night. 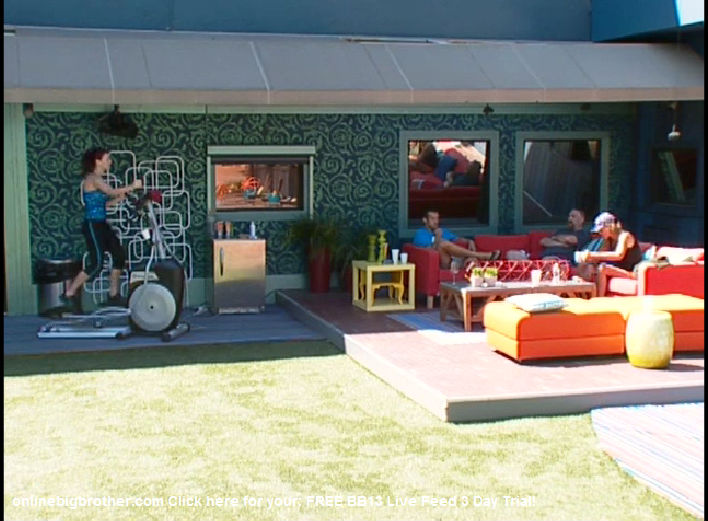 Adam starts talking to Brendon about where his head is at and that he is 100% loyal to Brendon and Rachel. Adam asks them what they are looking for. Brendon says that they are looking for people that they can trust. Brendon says that who ever goes after one of us … we will go after them next week. Rachel says that they know they can’t win everything… and that they need people that will help win stuff. Brendon asks who Adam would put up if he could. Adam says that Lawon and Kalia haven’t done jack shit. Adam says that he isn’t here for a free ride. Adam says that he doesn’t just want to go where ever the power is …he wants to side with the people he trusts. They talk about how in the beginning Adam was on the newbies side but that he is definitely not now. Brendon says that he needs Adam to tell them everything… that stuff gets around this house and if it comes back to us that you are lying to us …that would be the third time you burned us. Brendon says that Dominic has been coming to them wanting to work with them too. Brendon tells Adam that he can’t tell anyone that he has the votes. Brendon says that if Adam would take out some of the floaters …it would be a huge proof of life. Rachel says that there is no reason for a floater to be in the jury house. Rachel says that picking a side makes you a player and not a super floater. Brendon tells Adam that he needs to tell them what’s going on and not give false info. Brendon says that it will get back to them if he is lying. Shelly tells Adam that he can absolutely not win HOH this week …because she is going to win it …she needs a photo of her daughter. 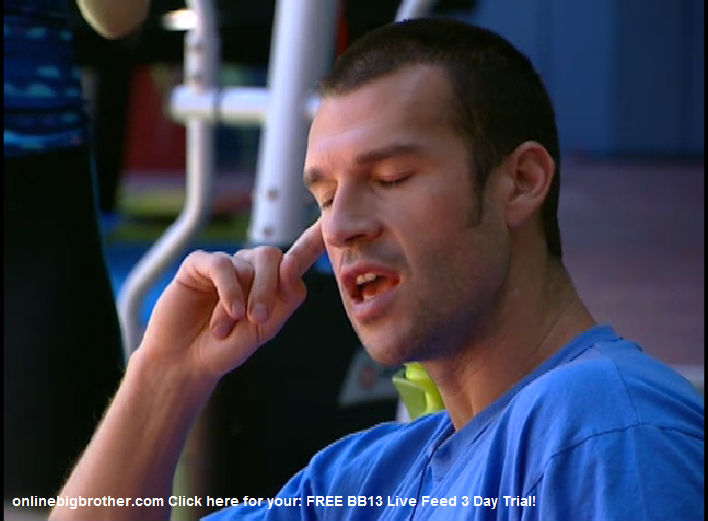 I sure hope that Adam is blowing smoke up their asses. People in this house need to realize that Jeff, Jordan, Brendon, and Rachel are going to skate to final 4 if somebody won’t grow a pair and put them up. I wonder if Dani will ? Because i feel like adam and dani are the only ones that would. I hope she wins HoH next week cause we know shes going to be pissed when dom gets evicted(if he does). ThIs would be a perfect week 4 for me.. Dani gets HoH…puts up Rachel and Brendon…then a Rachel and Dani catfight.

Shelly has turned up the game big time, she totally not a kathy 2.0. I’m still in shock that the BRJJ alliance is now targeting Dani and the newbs.

SHE SLIP RIGHT IN VETERAN #5 SPOT DANI F UP

This is crazy…Dani is a pretty big manipulator–it will be interesting to see if she can pull herself out of this mess!

I just think its sad…there is so much fear of the “vets”…the “vets” have been in the house ONE more time…I mean cmon! its not that big of a deal! the new kids can win challenges too….the fact that they aren’t, shows that the vets DO deserve to make it till the end

I WANT the vets to get someone else on their side, Its much more entertaining than if its kalia in the final 3…just saying….

dani was playing a perfect game, problem was that is was so high risk, that it had to backfire. and it did

I can’t wait til BR gets put up and shit hits the fan. Everyone keeps sucking up to the vets…they really casted a bunch of idiot newbs with no balls.

I still think it’s hilarious that the newbies had the numbers (and majorly so) yet the vets control everything. Newbs coulda picked them off one by one, but they all turned on each other like idiots and proved they also can’t win crap. Keith was an idiot, but he had one thing right when he said “We have the numbers, I just don’t get it!”

As soon as Dom is voted out this week – Dani will have to suck back up to Brechel (UGH). However, Dani is an awesome competitor so once they are singles I see her winning competitions with no problem. That might be the only thing she has to keep herself in the game. Kalia, Adam Por, and Law can’t win competitions unless they just get lucky.

if it’s endurance this Thursday Dani will win it.

I hope your right Simon, she’s the only 1 I’m rootin for now yo. Otherwise it’s her ass.

These people need to grow a pair.

I honestly stopped watching the show. I can’t take watching anymore of this rigged crap. I mean it really couldn’t be more obvious that this game is totally set up and favors B and R. I also cannot stand Brendon and Rachel. I refuse to watch again until they are gone. If there are other people that are pissed about them being on the show and feel that it is fake then you should stop watching too. the only way CBS gets the message of how much people cannot stand those 2 is if people tune out.

I also think the season sucks as a whole. Totally not fair to have a bunch of people that do not know one another play with other people that know each other and the game very very well. They at least could have made the vets team up with different vets and not allow them to be stay with the people they know best. That would have made it a bit more interesting and fair. Better yet they should have had a newbie and a vet team up. Anything would have been better than the crap CBS did. I will tune back in when Brendon or Rachel is gone and when the couples are split up. I will just keep checking this site to see when that happens.

I totally agree with Boring, I am so sick of BB productions having everyone follow the “script” they have written for this “reality” show. It is all geared toward BR and they made it even more possible with the stupid idea of The Golden Key. The newbs didn’t have a chance of doing anything because the vets know exactly what to expect either from being there before or getting instructions from the DR sessions. BR suck and everytime I look at that witch’s face or hear her cackle my skin crawls. Why does BB think we want more of them.? It would have been nice to have had a season of all newbs with everyone on a level playing field and really playing the game, instead of some peeps being told to throw comps or having only certain names to be drawn in the bag for comps. It is nice, once in a while, to have an allstar cast (where everyone knows the game) but vets vs newbs is totally unfair. And of all vets, to have BR is stomach turning, didn’t they get the idea, last season that no one liked the red headed hyena voiced db, I also am done watching, don’t need the aggravation, I want to be entertained, not disgusted or have BB think we are stupid and that things are not rigged in favor of some players.

ILL WILL
Reply to  nanahef

I think it;s scripted too, but BB has already lost all credibility in the last few seasons, so I just watch it for what it is Scripted/Rigged Reality TV.

Nicky
Reply to  ILL WILL

or maybe they chose them so BR can dominate easily

Hey Simon were you not able to get the fight last night in the lounge room, Where lawon and Dom got into it?

I must of missed that what time was it?

Ahh super educated Brendon and his malapropisms. ‘Proof of Life’ is a term kidnappers use to show a kidnapped individual is still alive. I believe Mr. Genius meant to say ‘a show of good faith’ to Adam.

vote that crack head off ( Rachel ) What a cry baby ass.