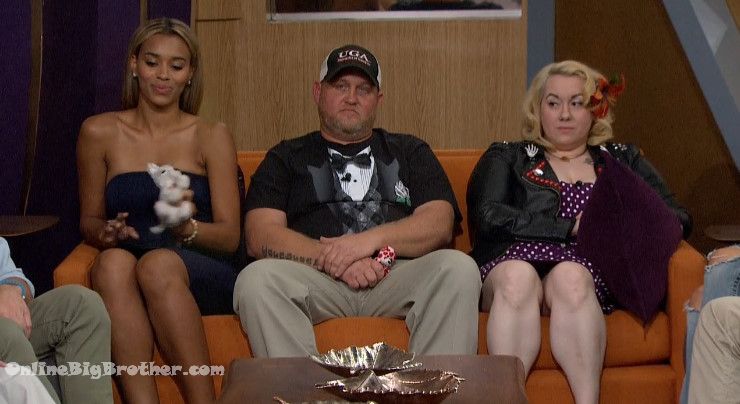 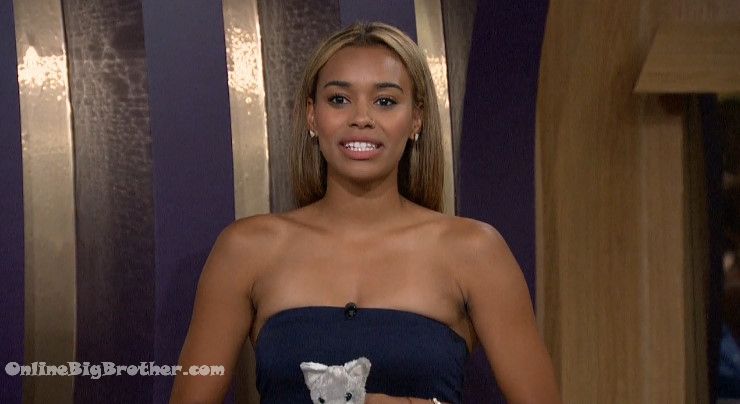 Danielle “To my son I love you and I miss you.. to my houseguests thank you for gettign to know me” 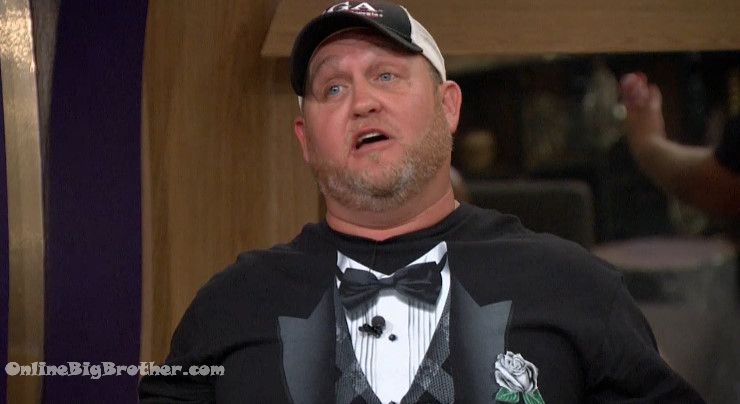 Corn “My friends I just want to tell Y’all I’ve had a ball, I love y’all ” 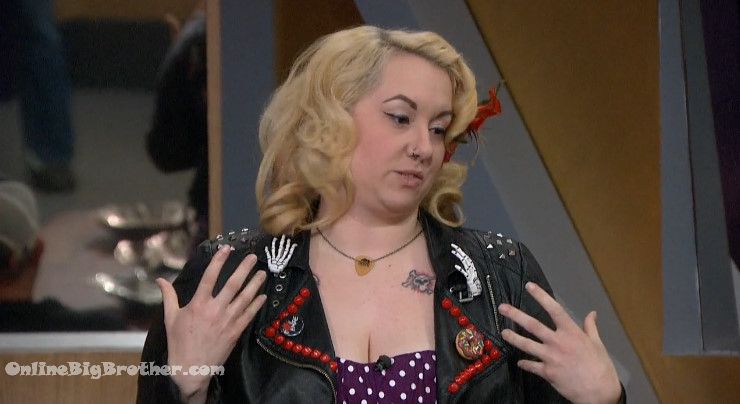 Kryssie “Hey butts.. the hardest position the first week is the veto nominee.. you need to keep someone that furthers you.. i’m not done here yet.. Lets make America happy by doing the right thing” 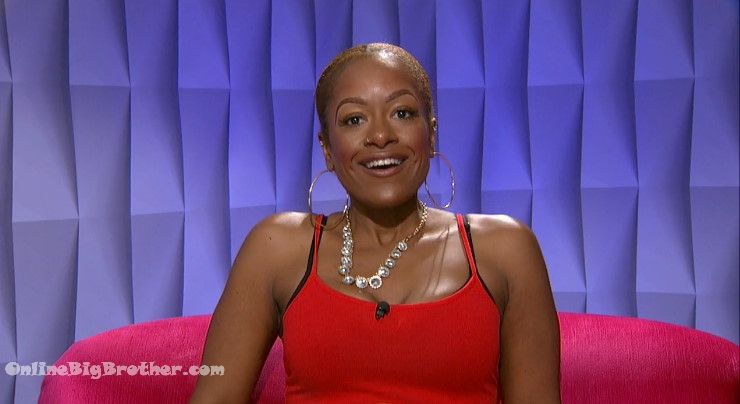 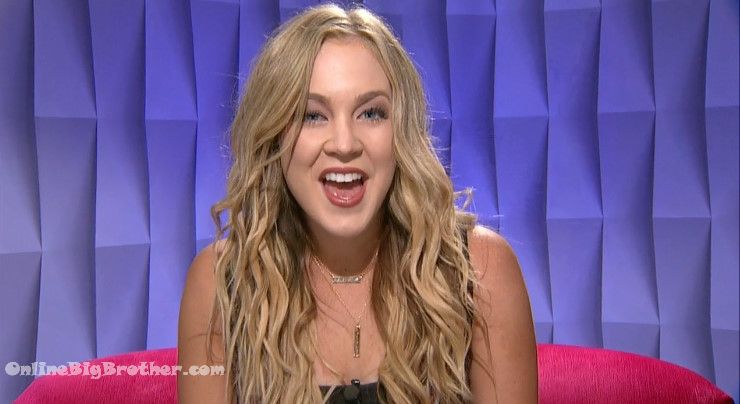 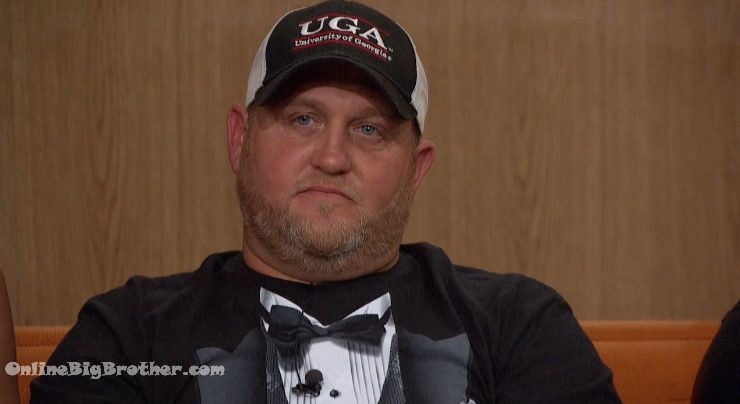 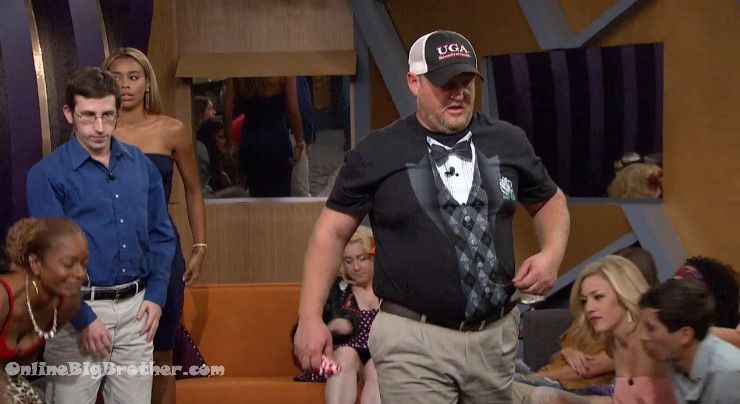 CBS All Access Live Feeds! Test them out 1 Week for FREE! 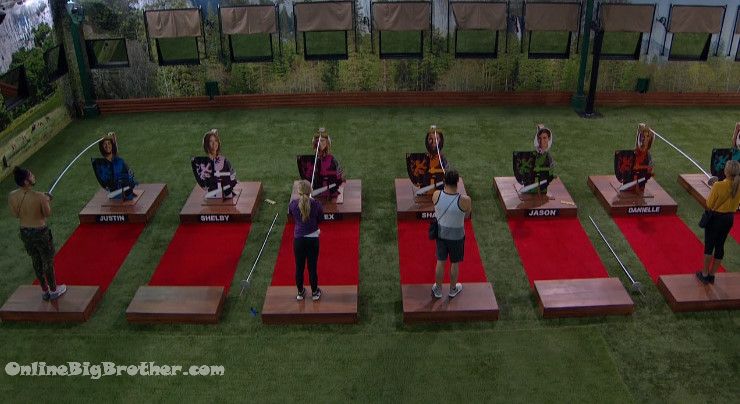 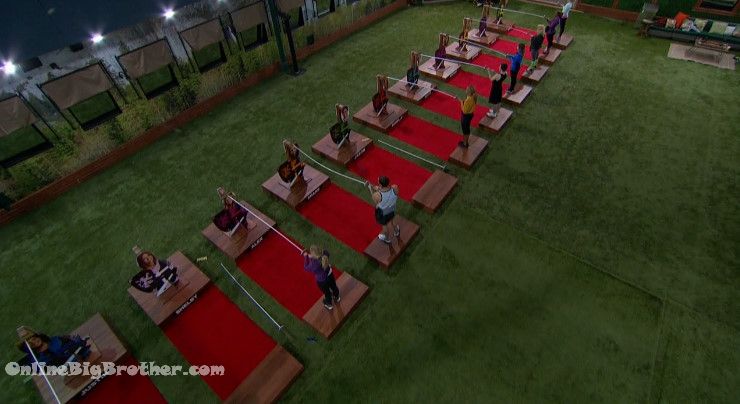 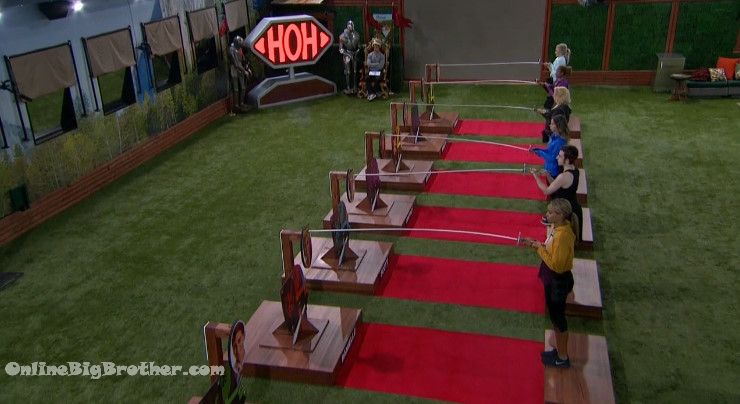 10:25pm The house guests are still competing in the HOH competition. Whitney, Neeley, Danielle, Alex and Justin are still in it. Morgan, Kryssie, Scott, Shelby, Shane and Jason are all out of it. Jason – they’re going to have to bring out some pizza to bribe some people for people to come off. They did that back in the day but they won’t do that now. That was BB5-ish. 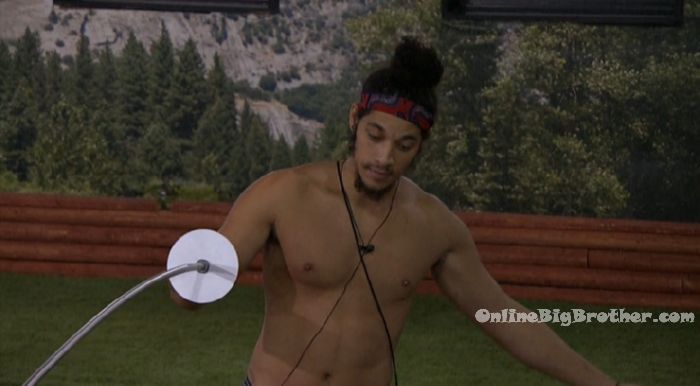 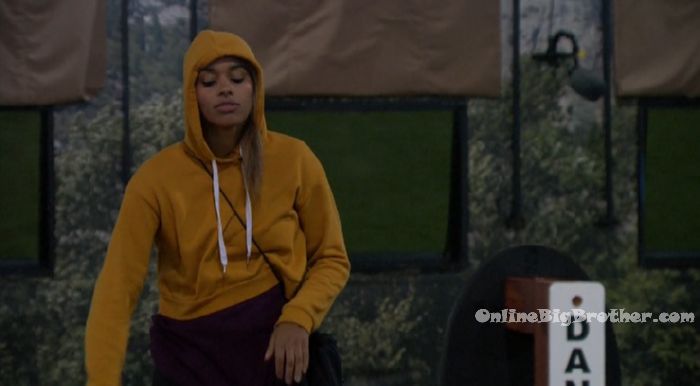 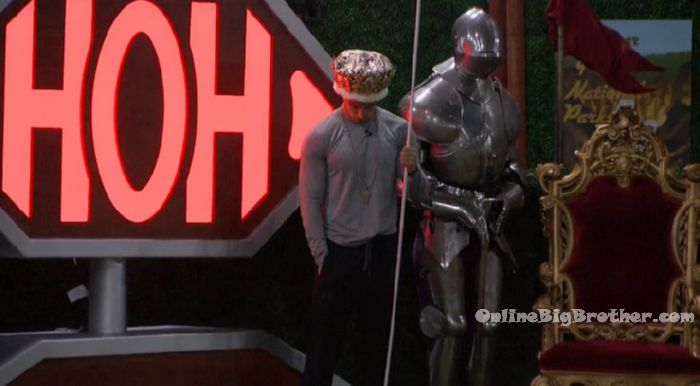 11pm Whitney falls out of the competition. Its now down to Justin, Alex and Neeley.

11:13pm – 11:25pm Justin falls out. Its down to Neeley and Alex. Alex asks Neeley want to make a deal. Neeley – I can hold out but if you want me to guarantee you safety, I will. Alex – I will to. I want it though. Neeley – I want it too, you know I haven’t been sleeping. Alex – If you give it to me.. I will not go after you and will not nominate you this entire game. And you can pick a nominee. It would be half and half.. we would be splitting HOH. Neeley – that’s a good offer .. but I want a bed. I’ll give you the same offer. Alex – I’ll let you sleep in the bed too. I like you and we could make some smart decision together. We would be splitting it. Neeley – I want it too. I’m going to hold out. I trust you though and no matter what I will not put you up if I win. 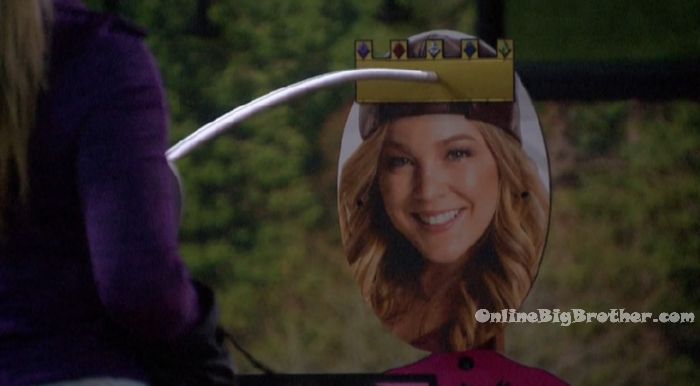 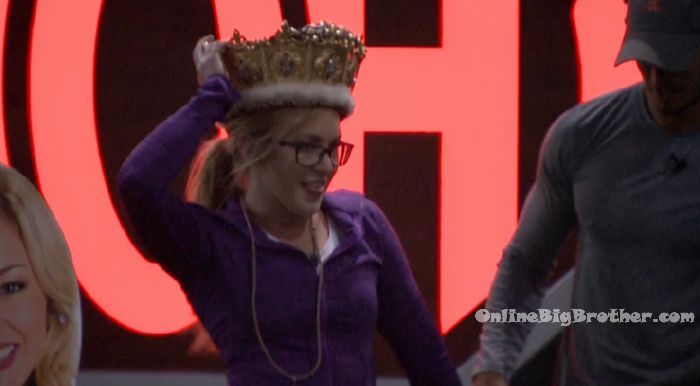 House full of James, let’s do what America wants! This OTT is going to be, “let’s not piss off America” vote out whoever Production…errrr America wants. That way we can get more Instagram followers!

Cornbread looked like he had a turd in his mouth when he left. LOL.

So, these house guests are just as messy as BB18.. except for kitchen. Rest of the house is awful.

Monte doesn’t know how to use soap.

Actually, i am liking this setup and the season. Wish more people wasn’t so against “paying” for the access. It really is such a small price to pay.

Did you miss the discussion? Monte takes 3 to 4 showers a day.

I was honestly very shocked that Monte didn’t go ahead and tell Cornbread that he was going home. He always wants to put himself in the best possible light but I guess he felt he did that by repeatedly telling him that he couldn’t vote. Can’t wait for Monte to be a have not AND on the block!

Yet Another Hillary Lie
Reply to  DanaDoo

Hopefully that is soon too.

I’m so happy Alex voted Danielle because now the house will wonder if America voted for her, which will really stir up drama

What happens to America’s vote. I donot have the feeds. Thanks Simon and Dawg, and the viewers. It is weird not seeing the house quest’s interactions or hearing their voices. It is kinda like reading a comic book…two dimensional….but I am still enjoying this site.

Ribbit;
I was in the same boat as you 3 days ago. I didn’t have All Access either, and was just trying to read stuff on here. It was weird not being able to hear their voices, or really put a name to a face. However, you can still go to cbs.com and watch some videos and clips for free. You can watch their pre-show interviews and a cpl other things. And there’s some stuff on YouTube. At least you’ll get to hear them :) You can also get the feeds Free for 1 wk. If you’re going to utilize the free week, I wouldn’t start it until next Wednesday though. This way you’ll get the most out of it :) I have the free version right now. I’m not gonna cancel mine though. You can if you choose to, I’m hooked, so I’ll be keeping it :) Hope this helps.

Thanks Willow. As an elderly Canadian I do not want any more charge cards or netflix. I cannot access cbc videos but I will try you tube.

Don’t think Justin will be able to sit still for the hours this will take.

Me too. I like the two sides developing in the house.

This is exciting as watching paint dry. Can’t be very hard since Justin acts like he’s trying to drop & nothing happens.

This is the dumbest version of BB yet. I thought I could maybe get into it, but good lord this is just a waste of time, stupid, and boring. I think it will tarnish the BB name in the long run. Oh well. Most things don’t last 18 seasons on TV anyways.

Why are they allowed to hold the end of pole against their body?

Could have been a good season.

Good cast, great diversity, great first week scheming, all ruined again by the twist. Sure we will have tension of people realizing they have no chance to win with the twist but the drama and suspense is gone. Write Justin or Jayson the check. its over

I have CBS all access and did not see how they voted. You would hear them calling each person to come vote but you couldn’t see how they individually voted. So how did you make that determination? Did I miss something?

Frank
Reply to  Amy in TX

You probably were watching only one camera. If you had put it on quad view you could see them voting.

Over
Reply to  Amy in TX

They showed it on more than 1 camera. Put it on quad view next time and you’ll see it all.

BigEd
Reply to  Amy in TX

Amy in TX
Reply to  Amy in TX

Thanks everybody for letting me know! And am I missing another something? Are they getting HOH mail from loved ones and their pictures? I’ve been wondering how Alex and Morgan will handle that. I’m thinking like Franke Grande did with old pictures or just leaving out sisters.

America nominate Morgan!!! Her ass needs to go up!!! #noplastics

Ditto
Reply to  Ya girl knows

I’d rather see the showmance out. Either one.

Anonymous
Reply to  Ya girl knows

I want monte out first and foremost. Monte for have not and otb!!!

They showed it on multiple cameras. Use quad view next time and you’ll see it all.

Sooooooooo glad Alex won! I really like her. It’s a shame she wasn’t on a different cast. I think she’s worthy of a real season, with real comps, and real game players!

**Cornbread was a sad sad very sad disappointment. Just watching the pre-season interviews, I was super excited when I seen him. Literally thrilled. I’ve been saying forever how I miss the older ppl like they used to cast. Then I seen him and was happy. But man was he a let down. I even liked him the first day or so. I liked his good ole Southern man persona. Then he was nominated and his true colors came out. That’s when I stopped liking him. Glad he’s gone.

** In the beginning I liked the simple comps, and by beginning I mean seasons 1,2,3, & 4. And recently I’ve been missing them a little. Like the how bad do you want it comps, where they literally stand in a box for as long as they can. So seeing the simple comps brought back into play made me a little excited. Well, that didn’t last long. I’m over it. Come on Big Brother. Use some of the money you’re taking from us and put forth a little effort. This cast deserves more than this. I feel bad for them. Some of them are talking about the slip in slide comp, OTEV, the dice comp, etc……yeah, it’s not happening! They’ve decided to run this season on a one man crew. He builds the sets(throwing some cardboard cutouts in the yard), runs the cameras(thats why we only have 2), buys groceries(that’s why they’re STARVING!!!), answers the phone, gets his own coffee and wipes his own a$$(LMAO). OK….so I made a cpl of them up, but you get my point. It’s RIDICULOUS!! I get that it’s a MUCH smaller audience, but this is almost ruining it for them. I’m not sure how many more of these BORING comps I can watch. In fact that’s why I’m here now. I couldn’t handle but 15 mins of this HOH comp and came here to see who won.

Just my thoughts so far :)

They are starving? They have to be awake from 10 am to 10 pm? I don’t feel bad for them. I like the idea they can’t play to the TV camera and have cheaper games. It has gotten out of control with their acting during diary sessions and too fake to enjoy for me.

Neeley, what happened to the bird?