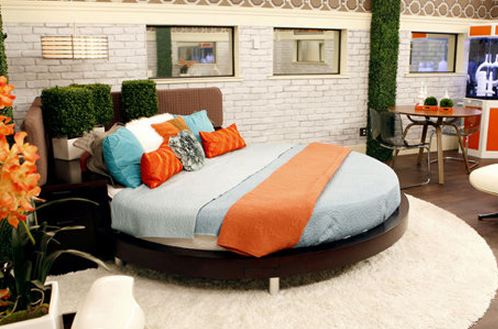 Head of Household
Throughout the Big Brother season, the house guests compete for the weekly Head of Household (HOH) power position during the live Thursday episode. The HOH winner retains the power for the following week where they hold the responsibility of nominating two house guests for eviction. As HOH they also receive the bonus of having the HOH Bedroom with an en suite bathroom for the week. In addition to getting an HOH basket filled with their favourite things such as their favourite music CD, candy, liquor, food, etc. The other perk that is probably one of the most sought after is the letter from a friend or family member from back home that they receive. After being locked inside the house for weeks without any outside contact, the letter from home can be the strength they need to continue to fight for the grand prize.

HOH perks
As HOH the house guest is safe from the threat of being nominated / evicted. The HOH winner gets the luxury of having their own private room with a king size bed, en suite bathroom, mini-fridge, and living area. As of Big Brother 5 the HOH winner also has the ability to spy on the other house guests through the use of the “Spy Screen”. The Spy Screen is a TV that has numerous cameras in the house linked to it for the HOH to spy on the other house guests. Unfortunately the Spy Screen does not have audio so the HOH is only able to see the other house guests. The HOH is also given a gift basket full of their favourite candy, food, music CD and a letter from a family member or friend from home. The HOH winner also does not compete in the Have / Have-Not food competitions as they are allowed to eat for the week.

HOH responsibilities
As the HOH there are certain responsibilities that come with the position for the week. The HOH is tasked with gathering the other house guests for meetings and alerting them when the following events are being held: Have / Have-Not competition, Power of Veto Competition, Nomination Ceremony, Luxury Competition, etc. The HOH is also responsible for explaining the rules and hosting the weekly Have/ Have-not competition. The often most difficult responsibility of the HOH is to choose which of the remaining house guests they will nominate for eviction. Once the HOH has decided who to nominate they perform a nomination ceremony where they retrieve each of the remaining house guest’s keys from the Big Brother Memory Wall. The HOH then places each of the keys into the Nomination Box excluding the two house guests that they are nominating for the week. The HOH then gathers all the other house guests around the dining room table where the HOH removes the first safe house guest from the Nomination Box. That safe house guest then removes the next key and so on until there are no keys left, thus revealing the two nominated house guests.

The HOH Endurance Competitions are typically the most anticipated and watched competitions during the season because the house guests are often required to endure extreme conditions to win. The anticipation and excitement of the endurance competitions are high due to the fact that all of the competing house guests have a chance to show how bad they want to win. The beginning of these competitions is shown on the live Thursday episode and then extends past the end of the show due to time constraints. The viewing public is then able to continue watching the endurance competition by logging into their Big Brother Live Feeds