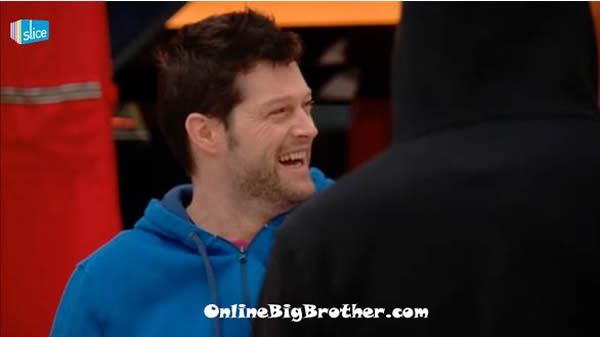 9:10am Big Brother turns on the lights and the alarm to wake up the house guests. All the house guests are waking up and getting ready for the day. Tom, Andrew, Liza, Alec, and Peter are in the kitchen talking about and wondering why they are on an indoor lock down. They figure its just for routine maintenance since there usually isn’t anything that happens on Sunday. Meanwhile up in the HOH room Alec and Tom are talking game. Tom says that this is such an easy week and if Gary wins HOH next week he will go after Aneal and Aj. Alec says that if I win HOH I will put up Aneal and Gary with Aneal as the target because he is the most immediate target. Tom talks about how Andrew and Aj wanted Suzette to win to take me out because they know they can’t. Alec says that he hasn’t heard that from them. Tom says you girlfriend and Talla were saying it. Tom tells Alec how she talked to Talla and she said if she won HOH she would put up Andrew and Aj because they don’t talk to her and she has no idea where she is at. Tom says that Talla came up with that all on her own too. Emmett joins them. Tom says that the move to save Gary is smart because if he wins HOH then he won’t come after us. Tom says that he doesn’t care if they send Liza out first from the girls. He says that it might be easier on camera for me too. Alec says that he trusts Topaz and she is the one telling him there is a possible girls alliance. Alec tells Emmett that Jillian is a part of that too. Emmett doesn’t comment. Emmett heads downstairs.

9:50am – 10:15am Liza and Peter are talking on the backyard couches. Liza says that she doesn’t think she can win … win HOH, not the game.. she says that she sits out here planning what to say to whoever wins to get what I need done. Liza says that she wants Aj out because he is a marionette with each limb tied to one of the guys. I don’t know where he is at and I know I don’t have his jury vote. Peter says not necessarily it depends on who you are up against. 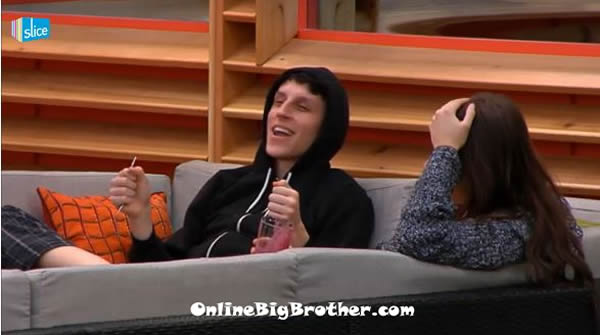 10:25am – 10:30am Jillian and Emmett joins Peter, Alec, and Liza on the backyard couches. The conversation turns to talking about beaver tails, slop and other random things. They start talking about the full bio questionnaire that they had to fill out. It took hours to fill out, they had to answer tons of questions and draw pictures. 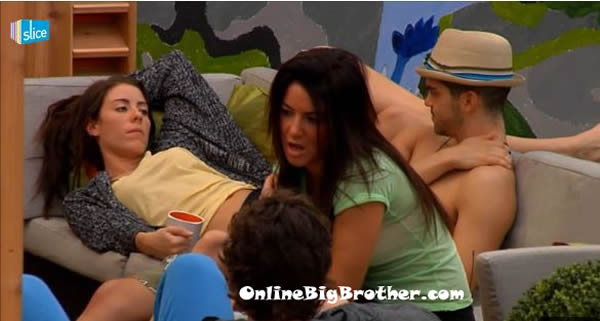 10:35am Emmett tries to crack Jillian’s back. 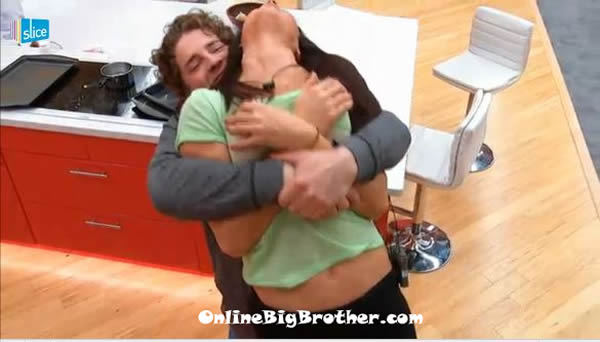 11am Jillian lays in the backyard and starts rolling around. The Peter, Aj and Andrew start throwing pillows at her. Emmett comes from the inside of the house with a bunch of pillows and throws them all at Jillian. Emmett says they should play dodge ball with the pillows.

Emmett and Peter start setting up a dodge ball court in the backyard. Aneal is sitting on the backyard couches and comments on how he notices whenever he joins a bunch of people, 10 minutes later everyone gets up and leaves. 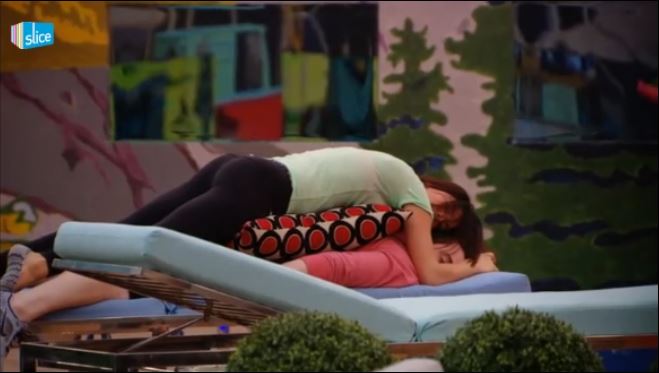 11:20am Liza and Talla talk about how the guys wont take them to the end. Liza tells Talla that Tom told her he is taking Emmett to the final two. Talla talks about making big moves. Liza promises Talla that if she takes out Emmett, Jillian won’t be mad. Liza says even Tom would be mad but once he thinks about it he would realize you did him a favor.

11:30am – 11:45am Talla and Jillian are in the havenot room talking game. Talla tells Jillian that Emmett is a sweet guy but you have to keep your guard up. Talla tells Jillian that the guys have an alliance. Jillian says that she knows they do. Talla says that she is gunning to win HOH on week 6 or 7 because thats when we start thinking about jury house and we need to make a big move. Jillian agrees and says that she is willing to make big moves too. Jillian says that Emmett doesn’t think that I talk to girls or that we have an alliance. She says I love you, but .. well I don’t love him but sorry to his family. They talk about their 9 – Talla, Jillian, Liza, Topaz, Tom, Emmett, Alec, Peter, Andrew. Talla says of the girls when it gets down to it, Topaz could be the first to go. They talk about how they have to make the girl thing work. Jillian says she won’t stray, I am not stupid. Talla says if we do this we will be coming back for all-stars. Talla says I will gladly play the evil queen, I already am and its working out perfectly. Jillian and Talla go to leave the havenot room and find Alec right outside the door. (Since the door is super thin it is likely Alec heard a portion of their conversation.)

12:20pm – 12:40pm Out in the backyard Tom, Andrew, Topaz are sleeping. Big Brother turns the alarm on to wake them up again. All the house guests are lazing around today. Liza comes out into the backyard and announces they got self tanner.

Hey Cooper! I’m just cheering for smart girls for once on a BB season!