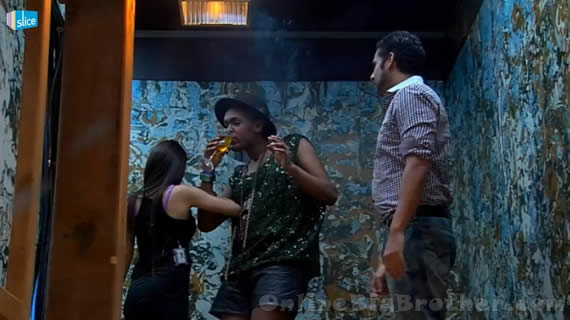 Talla questions what exactly does Garry mean when he says he’s got Tom’s back.. Aj joins them.. talk changes before Garry gets a chance to answer. Talla starts saying that if Garry was from Edmonton he and her would totally have been friends. AJ: “Talla are you buzzed?” Talla: “Kinda” Garry: “Cheers”

Aj starts chatting about this girl he likes that he met in Cuba, “We’re in friend zone”. Garry asks if anything happened in Cuba. Aj says there was nothing that happened, she was from Toronto and he left her on literally in a middle of a conversation to go on Big Brother Canada.

Garry says if nothing happened in Cuba than nothing will happen in Toronto. Aj hints that something kinda happened with him and her..
Aj and Talla start chatting about their “relationship”

Garry: “Should I leave.. cause i’m done my smoke”
Talla and Aj both say no.

Garry starts showing off his “Brand” by dancing around in front of the camera. 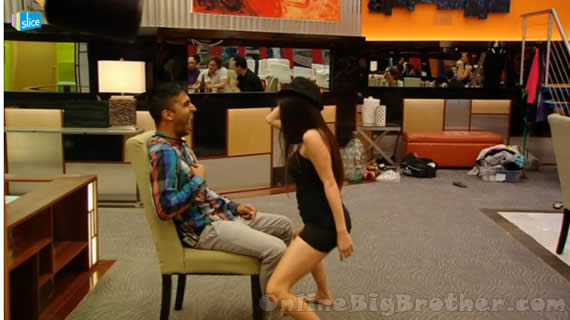 10:32pm Kitchen Everyone around the dinner table drinking and having fun. Emmett brings up Big Brother 9 where Natalie was giving guys lapdances. Talla asks if she gave a lapdance it would be on Camera. Tehy tell her yes so she starts giving Aneal a Lapdance. Everyone is freaking out laughing..

About 10 minutes later you can hear Talla telling big brother “Can you delete that Lapdance”
Most hosueguests are tipsy a bit. 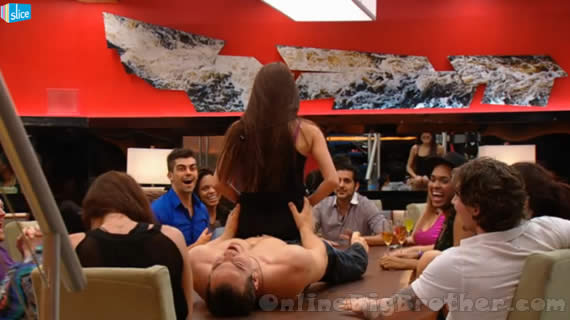 10:50pm They are all chatting for Talla to Climb on Tom She does… After she’s done Talla: “You think my mom is going to see that” AJ: “Yes.. they are goign to open the next episode to that.. ” Talla: “shit” 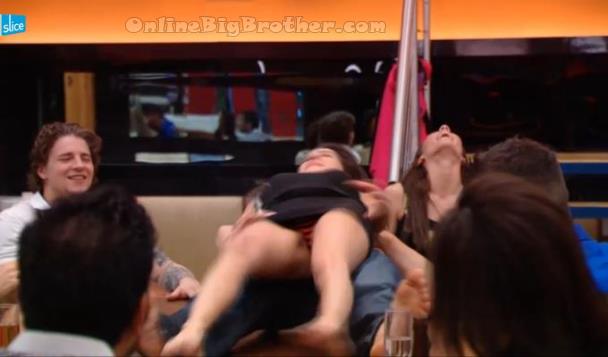 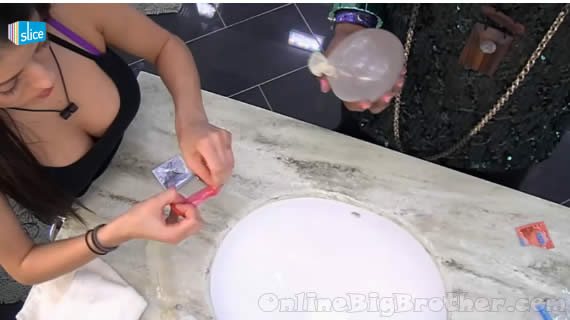 11:06pm Talla and Garry filling condoms up with water to attack Emmett

Tom is telling them that tomorrow morning they will pour a bucket of cold water on them in the morning. Tom: “take that B1tches”. Emmett and Alec do not seem too onboard with this plan. They propose just throwing a condom filled with water on them. Tom’s reply “I don’t use condoms.. condoms are for pussies.. I’m clean i’m fine.. Pull out and shoot on them T!tties”

#BBCAN Garry and Talla crack the toilet water is leaking out twitter.com/bigbspoilers/s…

11:21pm Garry and Talla are called into the Diary room for breaking the toilet

They are told to turn the water off in the toilet and tell the other houseguests that everyone must use the HOH bathroom until they have time to replace it. Talla: “there will be further repercussions”

I think it was a joke.

I do recall saying the houseguests are extremely sexual!
LOL ;D

These videos are hilarious! This has been a fun night.

Tom officially creeps me out

Tom’s emotional behaviour might be due to the fact that he was sying his mom has cancer.i feel sorry for him but he is a bully. and i dont know why garry has to go and tell topaz and alec what he and liza discussed that could have been a good start of an alliance gary,liza,andrew,aj and aneal.geezzzzzzzz arghhhhhhhh when are these guys really waking up and stop this Tom,emmet control??