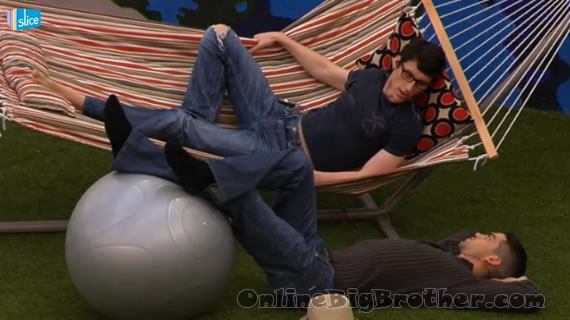 12:00AM Hammock Peter and Alec Peter says if they take

Liza was suggesting to Tom to throw HOH to a floater..
Alec: “This isn’t adding up I don’t like it”
Peter: “They are just latching on to anything they can find”
Alec: “Right now we’re watching onto Tom and I don’t like that”
Peter thinks its a good idea if they take out DAnielle this week. Alec brings up that they can get Aneal to agree to any deal. Peter: “Ya and we can get Aneal to take out GAry.. I agree with you about the latching on thing but we have to at least create the illusion.. if they flip on us we’re screwed” (Peter is concerned that Tom and and will go to the other side and take them all out)
Gary about Lisa “She’s dangerous to the max yo”

Alec asks him what he should tell Topaz. Peter is worried that she is part of the girl thing. Alec is positive she is not. Tom joins them tells them 101 reasons why they need to get right of Danielle. 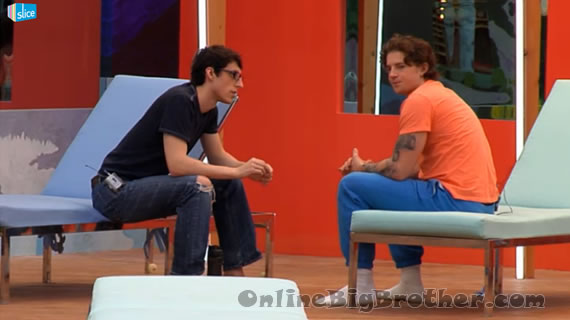 Peter starts selling the idea that Gary is dangerous and they might want to take out Danielle. He mentions that Gary and Danielle told Liza they are going after the showmances. Peter adds that Aneal’s number one target is Gary.

Peter and Emmett are both very worried about Liza. Peter thinks she’s a top player.

Emmett says it doesn’t make sense that Gary and Danielle are telling Liza that they are targeting the Showmances. Everyone knows Liza and Tom talk and word would get out. Why would Danielle say that when she’s on the block.. Emmett: “Gary is a smart guy he wouldn’t make that mistake”. Peter and Emmett agree that Liza’s story doesn’t make sense. Emmett: “I see Tom and Liza talking in the hammock all the time”

Peter: “The way Toim described it.. makes a lot of sense to send Danielle home” 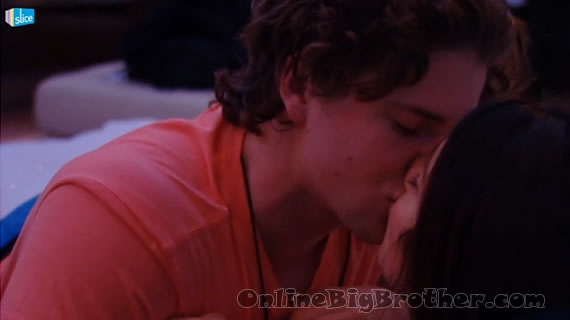 12:18AM HOH Emmett and Jillian Emmett relays the conversation with Peter. Emmett thinks the entire thing smells fishing why would Danielle and Gary say to Liza that they are going after the showmances. Emmett plays a good game of Pocket pool. Emmett really doesn’t trust Aneal but on the flip side he they might be able to make some wort of deal with him 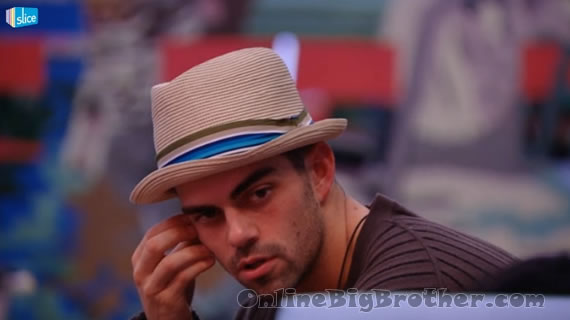 12:35AM Peter, Alec and Aneal
(Prior to this conversation Aneal campaigned to Peter for a bit, during that conversation Aneal said they need to break up the “secret power couple” that secret power couple is Daneille and Gary .. lol )
Peter and Alec explain that there might be a way to save him this week. Aneal says he thinks they can get Liza on their side if he sticks around. Aneal says he really only needs to get one vote. Alec and Peter make it sound like they are going to be trying to get him the votes. Peter and Alec tell him they are going to try and get Aj’s vote. Aneal will do whatever they want if they can keep in the house.
Petrer chimes in and says they will try their best but it’s no guarantee. Alec adds all they really need Aneal to do right now is chill out and not tell a person about them trying to save him. Aneal “I’ve been dying to get an allegiance going”. Aneal tells them that LIza says Jillian is her target. Aneal leaves ALec: “Chin up”

Peter and Alec continue their conversation. Peter: “How did week 2 become so complicated”.

Peter: “Tom has got to go and he’s got to go soon”
Alec: “He’s gotta go but not soon”
Peter is going to talk to Liza tomorrow and find out her side of the story. 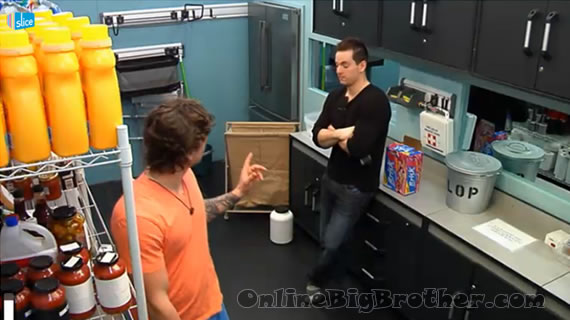 12:41AM Storage room Emmett and Tom (Talking about the recent change in plans with them wanting to get rid of Danielle instead of Aneal)

Emmett thinks that Liza and Aneal have a deal that is why she’s trying to get Danielle sent home. This whole story about Gary and Danielle targeting the showmances doesn’t make sense. Tom assures him that LIza can be trusted. Tom is worried about Jillian. Emmett reassure him that Jillian will do whatever he says. They tell each other that their cuddle buddies have only been promised final 8. Emmett wants to bring Aneal in Wednesday night and tell him they can help him get the votes but it’ll mean that Tom and Emmett are going to go against the house. Tom mentions they need to get Aneal to take out Gary.

Tom says they have the brains of Liza, Muscle of Jillian and A vote with Topaz, “Because let’s be honest.. whats topaz going top do” Emmett’s on board to take Danielle out this week.

Tom tells him they have to do something big and taking Danielle out is it, He leaves “I gotta go take a big F***ing Sh!t” 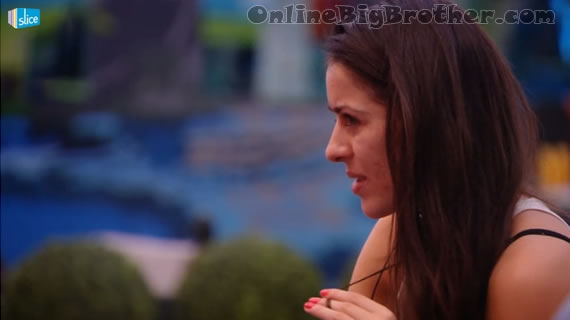 1:22AM Backyard Talla and Peter

Talla cannot trust Aneal but she can trust Danielle. Talla feels like Liza is a friend she’s known for a long time. 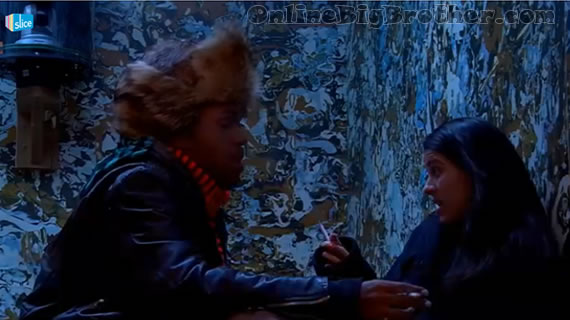 1:30AM Talla and GAry in the smoke hole (their talking a mile a minute as they smoke.. )
Gary is convinced that the house is going to evict Aneal
They agree final 2 .. They’re going to try and rally some more people on their side. Gary thinks he has Andrew and Danielle, Gary: “Andrew is smart.. I got him.. I give him advice” . Gary is worried that the other players perceive him as a strong physical player, he’s going to have to lay off the physical aspect. If Gary wins HOH next week he’s putting Suzette and AJ up. Gary says they then need to take out Tom and Peter. Gary mentions they can use Jillian and Emmett to take out TOm

They leave.. Talla: “Totally Farted” Gary: “Loved it.. hated it” 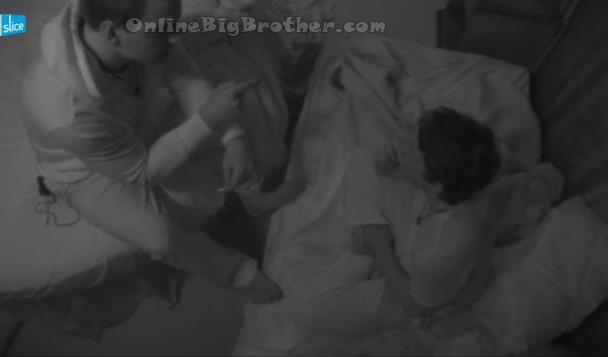 1:40am Peter and Tom
Peter warns Tom that he needs to real it in a little bit more because the entire house is seeing him as a target. Looks like the plan is still in play to get rid of Danielle.
(Video uploading)

2:15AM Looks like everyone is sleeping
9:41am Everyone Starting to wake up 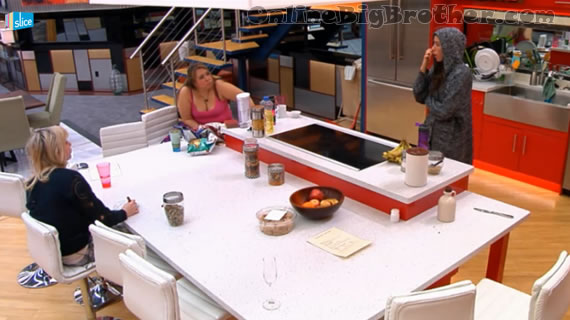 9:51AM Kitchen Danielle, Liza and Suzette talking about dreams and being cranky because they are getting no s$x 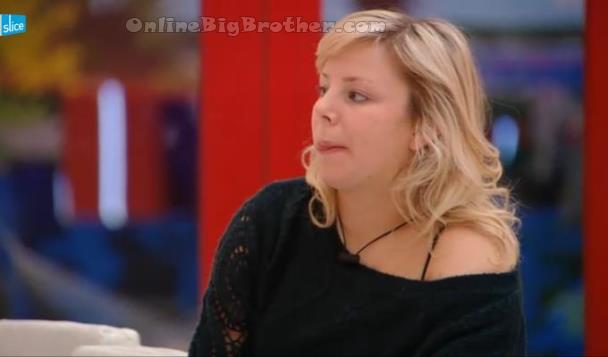 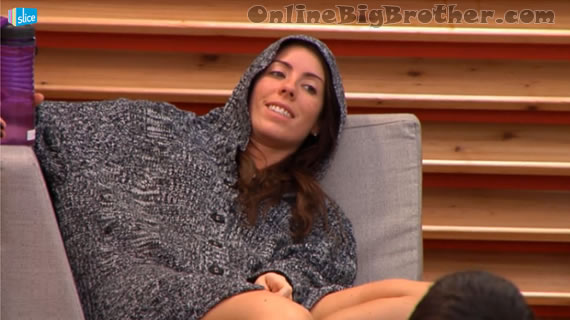 10:00AM Andew, Liza, AJ and Peter backyard. random chit chat, AJ tells them how much he loves the sports reporter Erin Andrews. 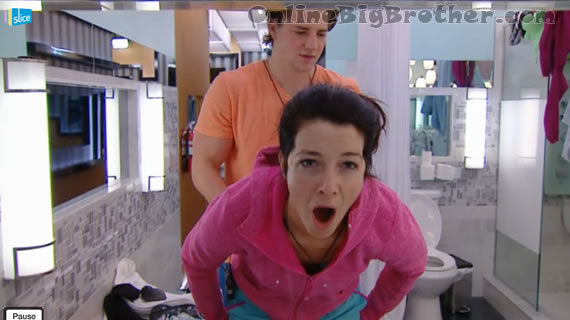 10:03AM HOH Emmett and Jillian

Chatting about the morning. Emmett gets behind Jillian grabs her butt and says my A$$ is sore right here.. (From doing squats see image above)

Emmett is on the bed listening to Jillian’s HOH music, Jillian is putting on makeup.
Jillian comments that her music request during the survey was all country but the music she got was a bunch of POP Emmett: “A lot of BAckstreet boys.. man whole album here” 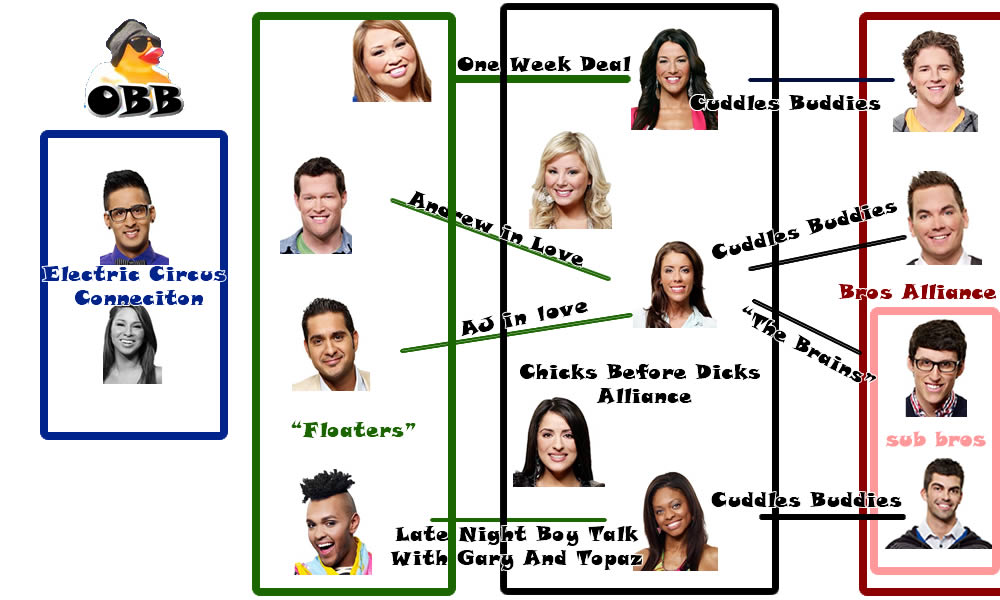 It’s hard to figure out what they are going to do.. Sometimes they say Aneal is gone, other times it’s Danielle.. All i know is things will probably flip a Dozen times before Thursday.

I agree. I’m loving that they’re keeping Aneal at the moment though. He has the ability to shake things up on his own more so than danielle. I was pretty skeptical at first about this season and its looking like its gonna be a gooder. People are gaming early. I love that they have it exactly like BBUSA with the competitions and whatnot. Thanks for the time and effort you put into the site

I think Danielle could do some damage. I know her type. If Aneal stays he will fall into step with Peter and Alec because he is a big fan and wants to be there, I think he just wants to make jury. Danielle however seems like the type that is used to getting her way, and she has quite the potty mouth and a heavy dose of passive aggressive that is just below the surface, a little tweaking and she could go off big time. She could rally the girls once Jillian is no longer HOH. She already has Talla and Gary. Liza is the wild card. I’m not sure which way she will go because she has promised both sides she is with them. I am liking her game, but she will be in trouble if people start talking to each other. I suspect that her main concern is breaking the Jillian/Emmett alliance, and the best way to accomplish that is to keep Aneal. Aneal has nobody in the house and he has significant enemies (Gary and Emmett want him gone). He will be easy to manipulate going forward, and easy to get out later on. Danielle is more likely to rally Suzette against the 6, Talla, AJ and Andrew than Aneal is. That said, I think Andrew is playing both sides and I’m not sure he is solid with the cool kids. He is mature and grounded enough to know that in the group, he is more expendable than Topaz and Jillian.

My money’s on Danielle being evicted. Just a gut feeling. I think Liza and Peter are definitely the early favorites to win, which probably means it’ll be someone else (who saw Ian coming Week 2?). But geez, I wish BB would do something to liven this bunch up a little. If not alcohol, put Willie in the house for a day, just to stir things up. They’re having a hard time keeping my attention, which definitely shouldn’t be the case so early in the game.

Every week one of Big Brother should have Willie in it.

I totally agree the 2 top players right now are Liza and Peter..

omg emmit and jill bug me alot, they they their the best but jill is being used and emmit acts like a big shot, the best thing to do is to not lie right at the beging of the game like be honst to aneal, like i hate that they wont tell him whhy, wouldnt they like to know,, right? ohh well my gut says emmitt will be gone soon hopefully im hoping that aneal stays and the shocked face wit danielle and jill