9:27pm Kitchen Random chit chat about their swearing
Andrew: “I said Horse co*** thats not swearing”
Liza says production has made it clear to her to be herself so that means swearing. 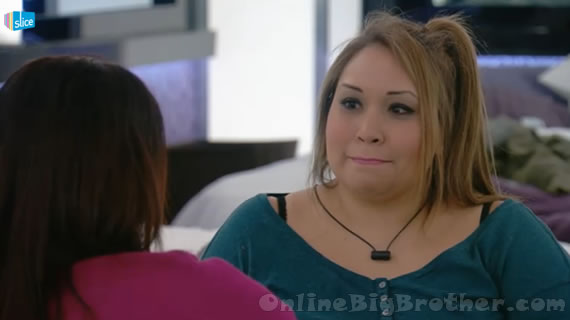 Suzette apologizes for the things she’s said during the last couple days. 3

Suzette says she on the block against Garry how is she able to campaign against him. Suzette says she wants to leave the house with respect and honesty. Jillian doesn’t know what that vote will be she thinks it’s going to be a house vote but she hasn’t talked to Tom yet. Jillian also adds that she likes Suzette and that is real she’s not going to lie to Suzette to her face.

Jillian is going to send Emmett in to talk to her. In the hallway Jillian grabs Emmett tells him to talk to Suzette. He doesn’t want to. Jillian explains that she wants to apologise, “She’s a human being Emmett go talk to her”

9:38pm Have Nots Topaz and Alec

Topaz is saying that the competitions are going to be so random. Liza could win a HOH during Double Eviction. They start kissing.. 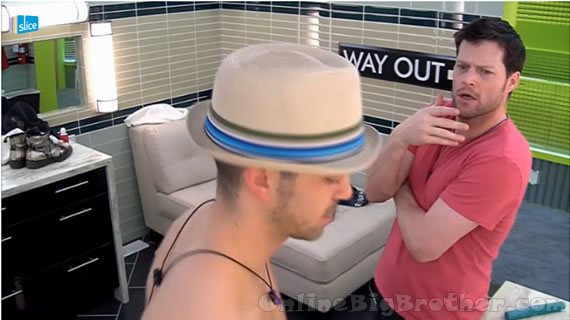 Alec says there is no point for Tom to be mean to Suzette it’s done she’s going home. Alec says the next plan is to take out Aneal. Alec: “Every Time we are talking Aneal is there.. and we’re starting to get worried about a girls alliance grabbing Aneal” Alec isn’t as worried about Garry anymore because he’s close to Topaz, “I would prefer to go after Aneal than Garry.. I’m most concerned about what Liza will do” Andrew and Alec both agree that talking to suzette and smoothing things over is the best idea. Talk moves to hosueguests that have had s$x in the Big brother house. Andrew starts talking to the camera saysing he would never have s$x in the house nor would he even m@sterb@te “I’m not going to m@sterb@te” 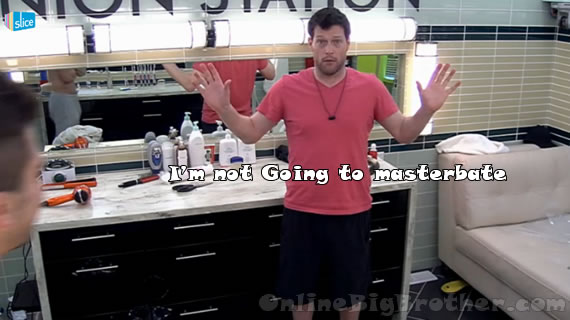 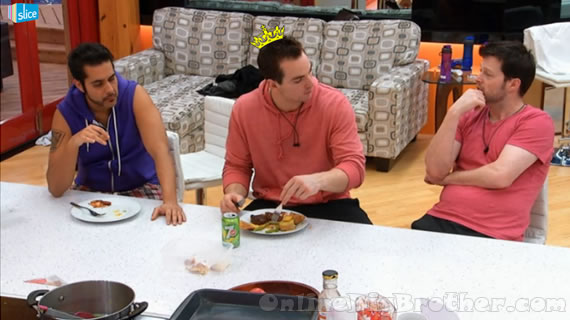 9:52pm Kitchen Tom saying that he needed to win it and he won it nows he’s got 2 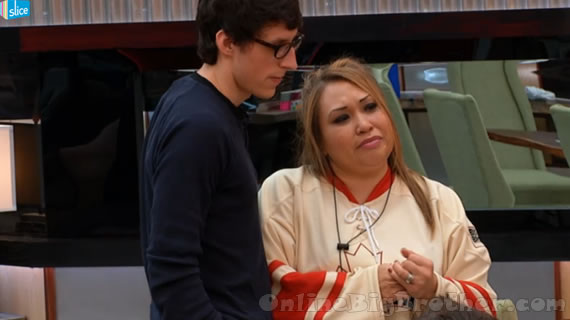 9:55pm Kitchen Suzette Apologizes to the house and starts crying.. She’s sorry for what she said to Tom he’s won 2 POV’s and a HOH he’s doing a very good job. 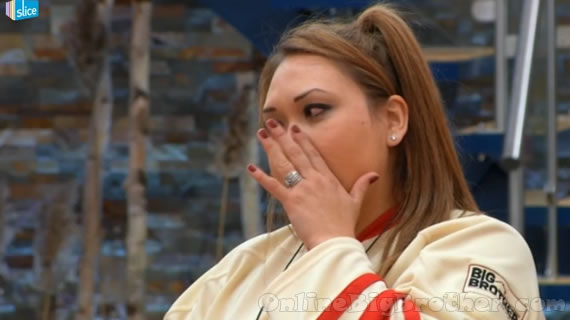 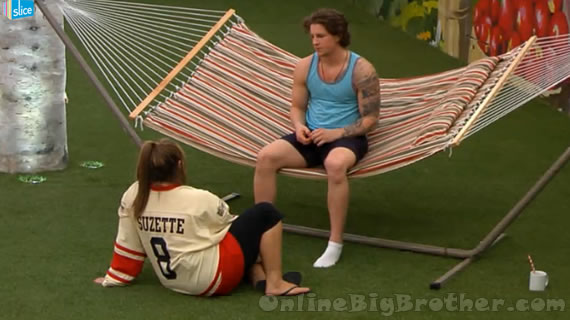 Suzette is apologizing for being disrespectful to Emmett, Tom , Jillian and Liza. Emmett says he didn’t appreciate her comments because his family is watching this show including his grandma and she wouldn’t want to hear those things. Emmett adds that Jillian is a teacher and the things Suzette said may not look good for her carrier.

Suzette starts to try saying she’s been treated so badly in the house people have treated her like a 12 year old.
Suzette: “I’m just not use to be yelled at like a kid when I have kids”
Emmett: “People say things in this house that they would not get away outside.. I do accept your apology”
Suzette: “I’m going over major hormonal changes.. I just had a baby before coming into the house”
Suzette: “to be honest to you I haven’t had my menstrual for two years and I got it right before the POV” 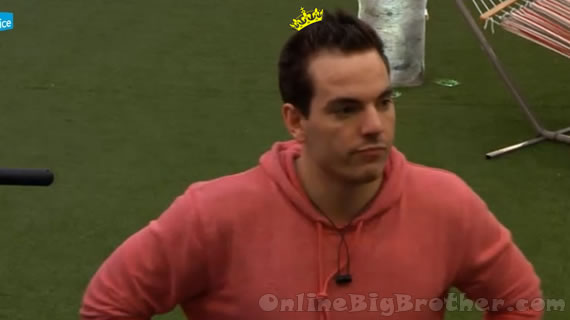 10:20pm Bros in the backyard
Chatting about Suzette’s apology. Tom: “you can’t start the game over again clean slate.. I want it to be 10 nothing.. i want to send a message” Tom mentions all he’ll say to Suzette is he accepts her apology but she’s going home on Wednesday to a 10 to 0 vote, “Just accept it”. Tom is going to use the POV and put Aj up as the pawn. He’s talked to him about it and it’s going to be cool.

Can someone fill me in on exactly what Suzette did and said to offend everyone?

Something about the girls.. Jillian, topax and liza giving blow jobs top get to the jury vote. There was a bunch of stuff to Tom.

I mean after he won pov not hoh

Great touch with Tom’s crown. I love how it’s just there in every picture, sometimes big, sometimes small–formal and casual. That’s Crowns by Gentleman Tom, Canada’s only choice for the discerning crowner.

(On a side note, I have way too much time on my hands!)

If someone who isn’t in the alliance next week wins HOH, they need to backdoor Tom. He is the biggest physical threat plus it will cause more drama= more tension.

I hope Suzette stays because of this apology.. like, she did the right thing apologizing. Now she just needs to stay close with everyone and allow people to get comfortable with her. Maybe Tom will actually stick to his word and take Gary off and hopefully he puts up Aneal. And I’m sure Aneal would go. But, I doubt he’ll put Aneal. I’m thinking he’ll put up AJ.

I’d hate to see Andrew, Aj or Aneal go this early. All three of them are letting the alpha males and Gary overplay. They are all smart in their own way and it would be more interesting to watch any of them in the game than Suzette. Even if Suzette stays, she isn’t going to win the game against competitors like Peter, Alec and Liza. She should go now, and then it would be perfect if someone like Andrew wins HOH. I think he would shake the house up real good. I also think that in the next week or two there will be a major twist in the game, like a DPOV or a wizard power.

What exactly is the benefit of getting rid of Suzette? It is just a waste of an HoH

“I apologise for….nothing!
You can all kiss my mouse!
Blame BBCAN –
THEY let me in the house!”

Tom’s message:
“I’m so scared inside, I need a soother!
I hope no one finds out I’m a gay bar cruiser,
or I like being tied up by old women in leather
and when I walk funny it because of the feathers.”

WTF is up with Tom!!! Apart from being a total douche, he changes his mind so often it makes your head spin! If I was Emmett, Peter, Alec, Andrew or AJ I would be worried right now. The guy is recklessly unpredictable and emotional!

If I was any of the girls in the house I would be SCARED right now..it is a red flag that there’s a guys alliance when, for the third week in a row, a girl is about to go home. If Liza is really wanting to go for a girls alliance she should take out AJ

This Quattro doesn’t have half the class or sportsmanship that the brigade had. They are just bullies and they get offended when someone figures out their master plan. These guys need to go. Garry. Aneal, Liza and Jillian pls wake up.

The brigade was also funny.. Lane and Enzo were hilarious on the feeds.

SERIOUSLY EMMETT? You think that Suzette’s comments are what’s gonna embarrass you in front of your family? And I think that’s the last thing that’s gonna harm Jillian’s career

The Quattro has use huge obstacles compared to the brigade there is 3 showmances really geniuses. These guys are a joke. They keep talking jury house but I’m confident there is no jury house.

If Tom was any kind of game player he would not be nominating people on a personal level.

It’s a wasted HoH for him to get rid of Suzette at this point … She seems to me like she would be the perfect person to take to the end. She seems kind of the same bb player as “Jenn City” from BB USA.