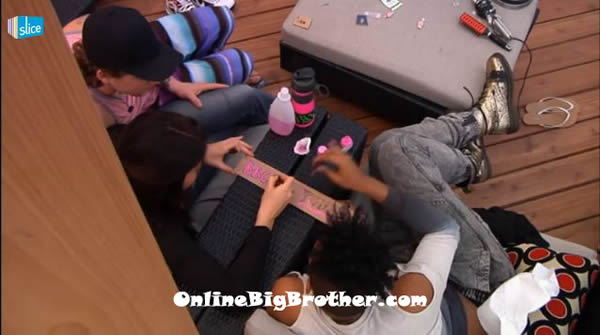 2:30pm – 3pm The air hockey tournament continues as they try to determine who the champion is among the BB House Guests. Jillian and Gary finish making the BB Canada air hockey tournament sign. Alec and Peter have a quick conversation by themselves on the backyard couches. Alec says call me crazy but I am starting to trust Gary and Topaz a bit more. Peter asks how does that generate trust? Alec says that he keeps asking Topaz and she keeps telling me, Gary trusts you, Gary trusts you. Peter says that’s fine but the house consensus is that Gary has to go. Alec says that’s fine but I think Talla has to go if Emmett wins HOH. If Emmett or Jillian win HOH then its better for us if Talla and Gary go up on the block. Andrew and Aj join them and the conversation ends. Andrew, Topaz, Alec, Aj, Emmett and Jillian all head out to the hot tub room.

3:55pm – 4:10pm The air hockey tournament continues.. Talla asks how she can move up the ladder in the tournament. They tell her she needs to win games. Emmett is in first place, Andrew is second and the other house guests continue to battle it out for the other spots.. 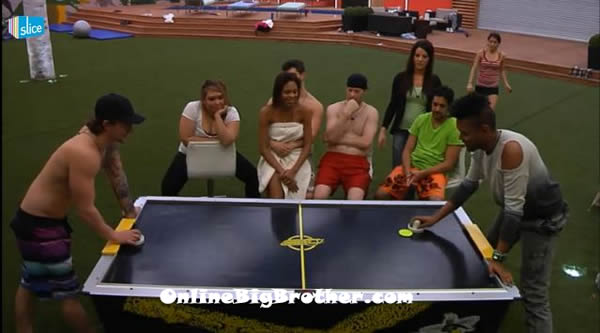 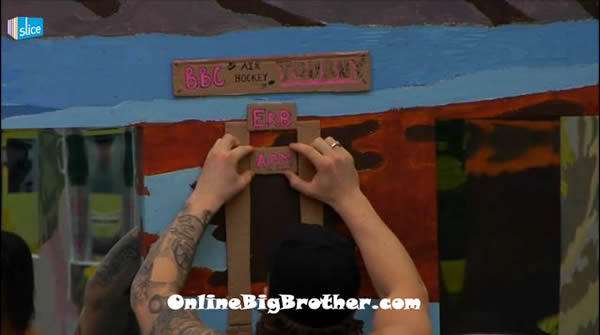 OH GAWD!! Alec doesn’t wanna give up his in-house bootycall so now he’s trying to be slick with how he campaigns to keep her around. Oh no!! Another few weeks of Laziness in the house…. Please let Talla, Andrew or AJ win HOH! This has become BB Canda The Showmance Edition. Yuck!

Topaz makes me sick !! BLA-BLA-BLA all day long. Except at dinner when it’s CHOMP- CHOMP-CHOM-CHOMP!
Please give us views a break.

I know this is hard to hear but I would rather keep Suzette and get rid of Topaz.

I hope she’s booted soon – If she moved any slower, she would be in yesterday. Real waste for the game.

You four officially have issues. lol

You, one and only, officially have separation anxiety.

Alec is a moron. All Topaz has had to do to increase his trust in her is kiss on him. constantly. Way to have game, Topaz! So now he believes her that Gary can be trusted too.

But if all it takes is a whole lot of loving to get Alec to trust you, then Andrew has the right idea