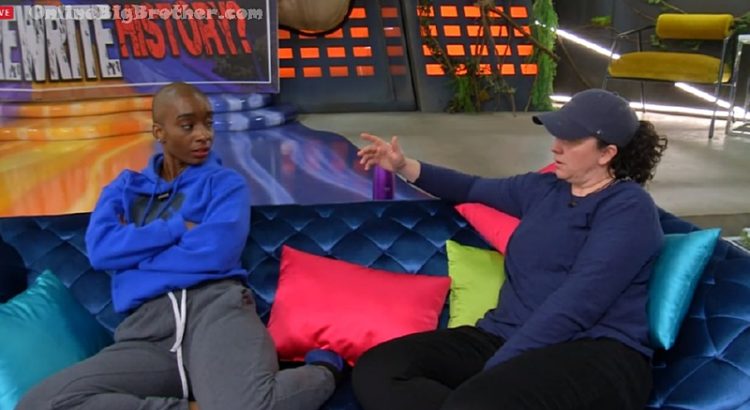 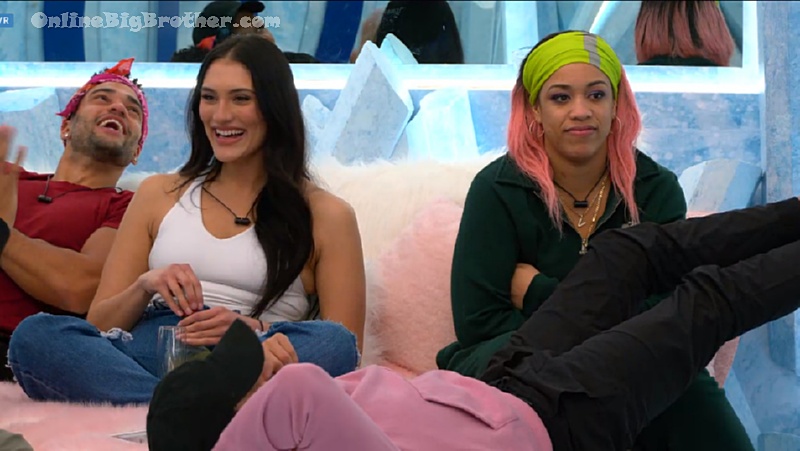 10:00 pm Feeds come on we see Austin’s Head of Household room. Everyone hanging out having some drinks. 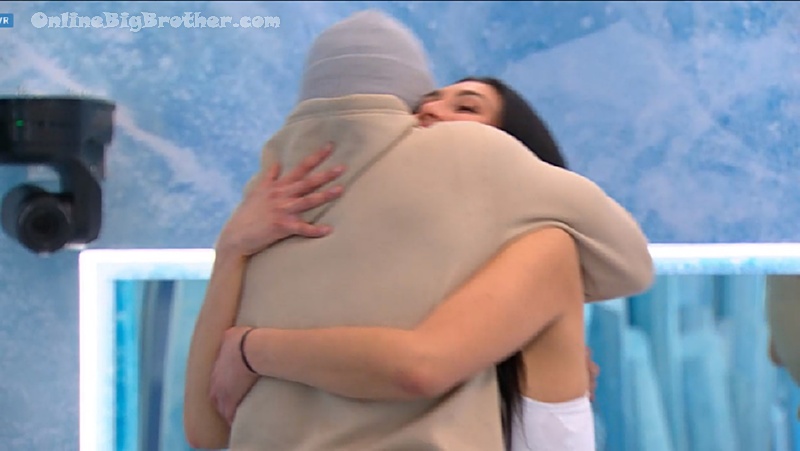 10:10 pm Austin and Tychon
Tychon – you girls are killing it for us
Austin says she feels for “VIC” because she never got an HOH last week.
Austin – you want a hot Cheeto
Tychon – YES
Tychon says the snacks she likes he likes to. “Cookies and cream’s and watermelons are exactly my favorite snacK that’s so funny” 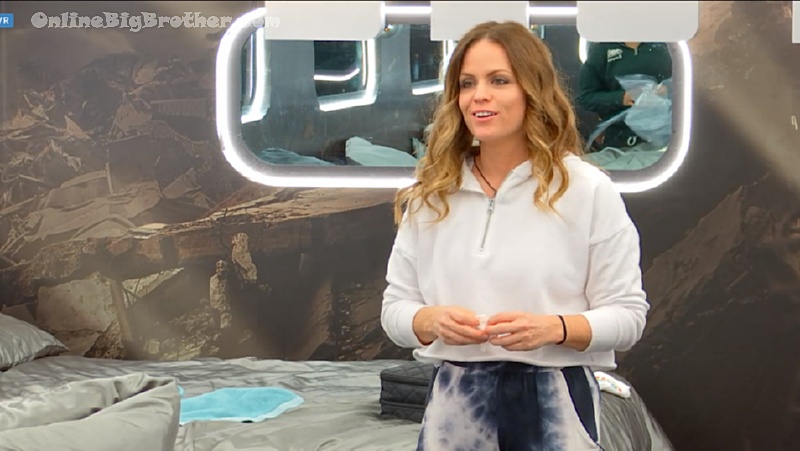 10:30 pm Tera and Victoria (when Victoria leaves Tera says she planted a seed)
Tera – we got to give Austin a bunch of support because she crushed it for us
They talk about there being “a small pool” of houseguests to pick from for nominations.
Tera – literally half the house is safe.. do you know what I mean?
Victoria leaves.. Tera talks to herself “this is how you find things out. little seeds” 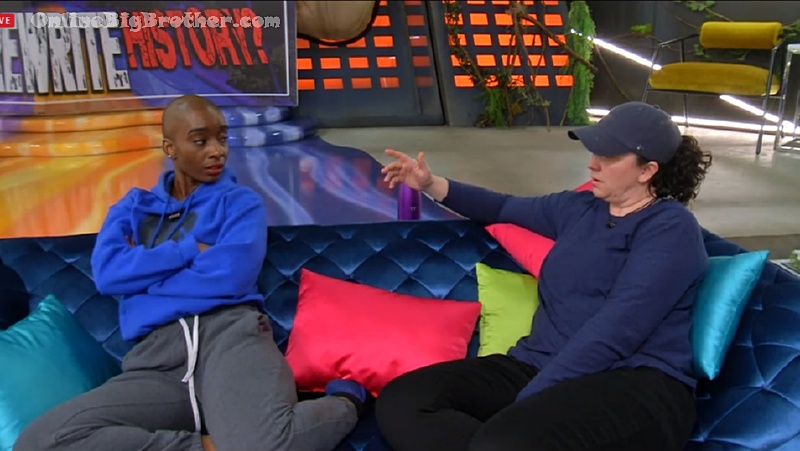 10:45 pm Latoya and Tina
Tina says she’ll make a point this week to “touch base” with every person in their group
Latoya – I’m going to express my concerns I AM I don’t like that. I do not like that.
Tina – mmhhmmm, who was it in that group that fake group? Kiefer wasn’t was he? he probably doesn’t know about it.
Latoya – it was Jed, Ty, Julie, Breydon, and Beth. That literally makes no sense. From the very beginning, Jed was in agreeance like evict Julie right. it makes no sense.
They wonder if it was one of those moments where you “agree and not agree” because it is the beginning.
Tina thinks they should just drop “that topic”
Latoya agrees points out that not everything needs to be addressed.
They both mention not trusting Beth.
Latoya says she sees Beth talking in the room with Breydon.
Tina says it was Beth, Breydon, Julie, and maybe Vic.
Tina – I think Austin was in there. This was before the vote.
Tina – Vic saw me seeing them go in the room.
Tina – I trust Tera more than I trust Beth
L – Me to
Tina – I trust you 100%
L – yeah
L – all these people come to me and want to work with me. I’m not giving them any confirmation.
L – Kief thinks he is going up this week. he was talking in the competition apparently
Tina – she doesn’t have many options. She’s not going to put you up so you are off the table. She’s not putting Breydon up.
They agree it would be a shock if she put up Jed. 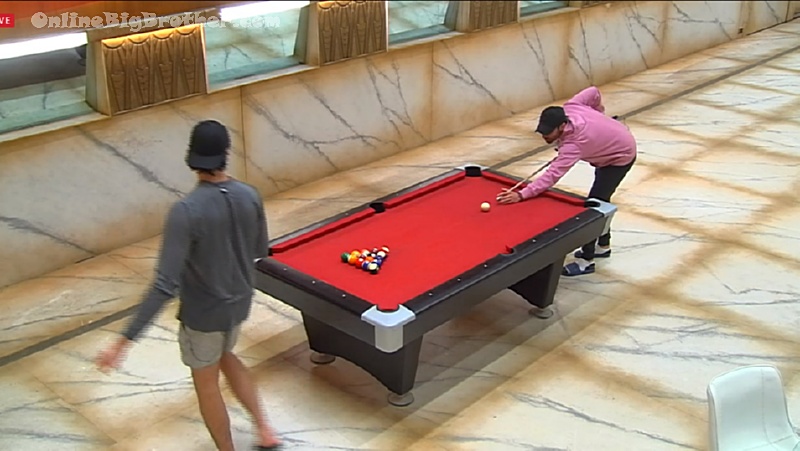 Ro – how did you find that blow-up
Kyle – I laughed
Ro – she asked me if she should do it and I said yes
Kyle laughs “I know I was there”
Ro – obviously I wanted her to put a bigger target on Josh’s head
Kyle – obviously Josh is going up
They wonder who the other Nomination will be.
Rohan – I’m hoping she does Josh and Kiefer
Kyle doesn’t think Ro will go up. Rohan says he knows he has Ty and Kyle on “that side” to keep him safe.

Rohan says it was just Beth and Austin were the two people he didn’t want to win HOH They agree they can’t stand josh. 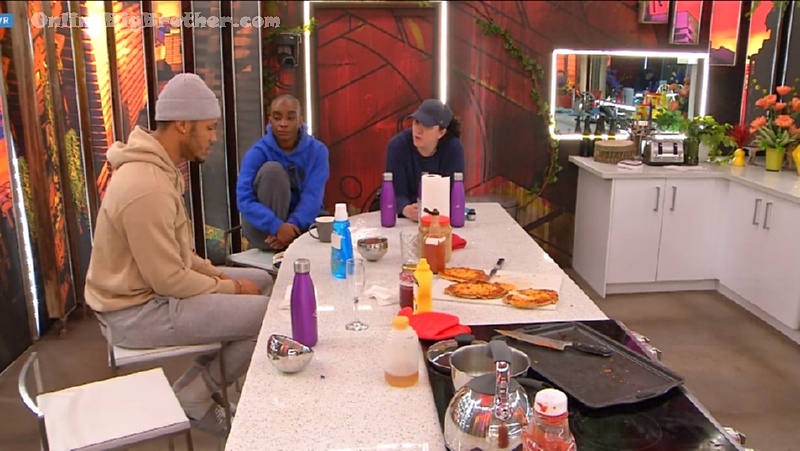 Tina – even if Kief goes on the block and stays on the block we have the numbers. Latoya and TY agree.
Latoya – the problem is if Josh wins the POV.. in that case, she will put up Rohan. She won’t put up Breydon. it will be between Kief and Rohan.
They agree they still have the numbers to keep Kiefer safe.
They bring up that Josh going home was the original plan.
Ty – if she had won HOH and Julie was still here. that would be way stickier.
Latoya – if we would have sent Josh home Austin would not put up Julie. Austin and Julie were like this (tight)
Latoya – that is what I was telling you guys the longer she stays the harder she is to get out. What did I tell you guys
Tina – you were right
Latoya – God, it’s a good thing she went home
Ty – of course
They mention if Julie was still in the house and Austin won HOH the possible noms would be Jed, Ro, Keif.
Latoya says if she had won HOH her choices would be Tera, Kyle, Vic.
They think the teams will end soon.

L – today was crazy that last couple hours of everybody scrambling
Tina – wasn’t that insane. people going everywhere. Julie cornered me twice.
L – yesterday it was Josh
Ty – what turned it
Latoya says she thought it should be Julie. Tina agrees, mentions they can use Josh as a target this week.
Latoya mentions having a conversation with Tera about getting Julie out. \
Tina – it was a light going off in her head.

L – I said to her if Jed had done the same thing that Josh had done would we still be voting him out.. and she was like WOW I never thought about that. I said you need to put your personal feelings aside.
Latoya also brought up that Josh was stronger in comps than Julie they needed to keep him on their team. Latoya points out that Julie dropped her slop bucket after “one top-up” 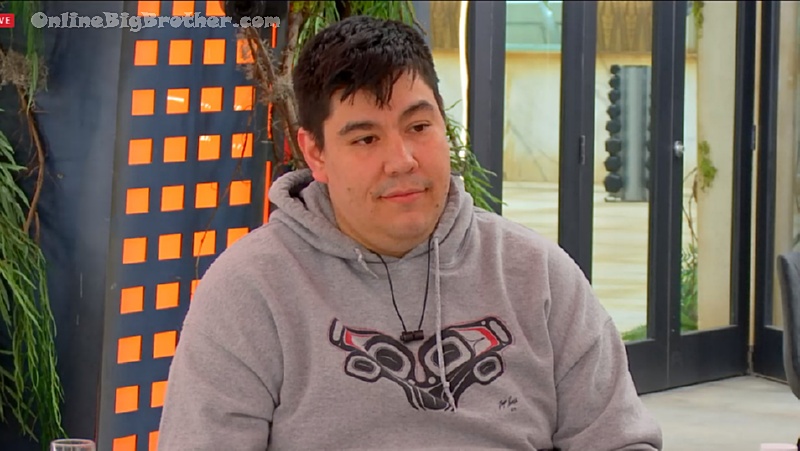 11:19 pm Kiefer, Latoya, Tina
Latoya – you’re fine trust me
Kiefer – all I need is 6 and we have 5 or I have 5
Tina – don’t worry about it. Keep calm
K – I’m going to chill, I’m not a crazy guy. I stress.
K – I don’t think I am going home if he (josh) uses the POV I don’t think I am going to go home that was either
L – when you talk game with Austin don’t talk to her as if she’s putting you up
Tina – it will be subconsciously in her head and she will put you up
K – she is though..
L – if she’s thinking about it you’re making her think about it
Tina – like you’re not even a target
L – play it cool

Night one.
Tentative Alliances and Deals.
Don’t make book on any of this.
Night one you never know who is actually in and out and which alliances are the real or the side deals.
I’m getting the feeling the core group of Tay, LaToya and Jed are still the core.
At the same time Tay and Jed are obv.pair, Latoya and Tina are obv pair2.
Kiefer is on the edge of this group.
I hope. No really. I hope it’s not going to be the case… but a couple of times I had to check if maybe Kyle was searching for a canoe iykwim. Hope not. But he and Rohan together… they could definitely be THAT duo.
The all guy thing? Not real yet as much as Rohan and Kyle REALLLLLY want it to be.
I honestly think Breydon and Austin are going to tank each other because they feed off of each others’ poor reads. Victoria isn’t going to help. She is going to be that emotion over strategy player.
So This is what I came up with from the time feeds started until 1am. I’m out. lol.

ssilva872
Reply to  another name

Thank you for sharing that graphic!

Thanks for posting this chart. Man the alliances are always a mess at the start.

wabbit
Reply to  another name

So so happy to be back. Couldn’t get through any BB without Online Big Brother!!! You boys rock!

PrincessJoules, Mother Sparkles the first one out, i can’t believe it. i’m devastated. Arissa said minorities in society shouldn’t be minorities in the house, well there was only one asian, and one transgendered in the house and they were the same person! And shes first out!?! Even BBUS first transgender lasted awhile. i thought Canada was all about transgenders. I’m feeling sick

I met her in person. She may have bone through a lot in life, but didn’t have much personality to get her far in the game. Called it earlier in the week that she wouldn’t make it far, sorry your favorite was the first out

It is a game regardless of race, creed or religion everyone had the same chance. BBCAN only casted people of diversity it didn’t mean they were go on going to influence or manipulate the game for anyone player. Personally i didn’t like her she seemed more interested in posing for the camera then actually playing.

Thank you Simon & Dawg! I missed this! Welcome back everyone! Two episodes and it’s been nuts!!!