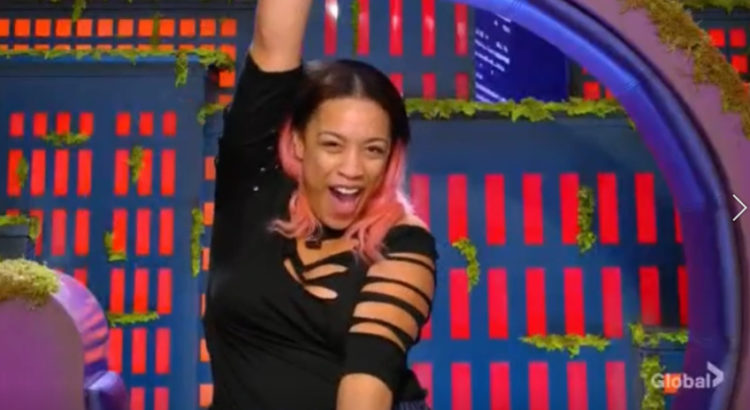 Howdy HO! folks. Here we are for another Big Brother Canada season. Before the real show starts when the feeds come on tomorrow night let’s take a look at the premiere episode. What can I say I’m excited about this cast going to be a Kraken good time. 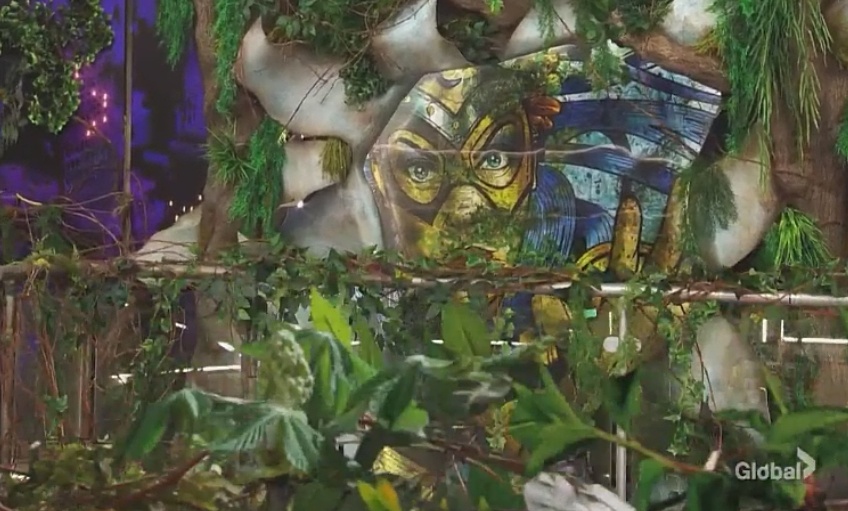 First off the intro for BBcan is always top-notch. Playing up the apocalypse theme in a big way showing how Covid cancelled season 8. Last season’s super hearo theme wrapped up in a fake jungle.

Trudeau and Ford make an appearance. 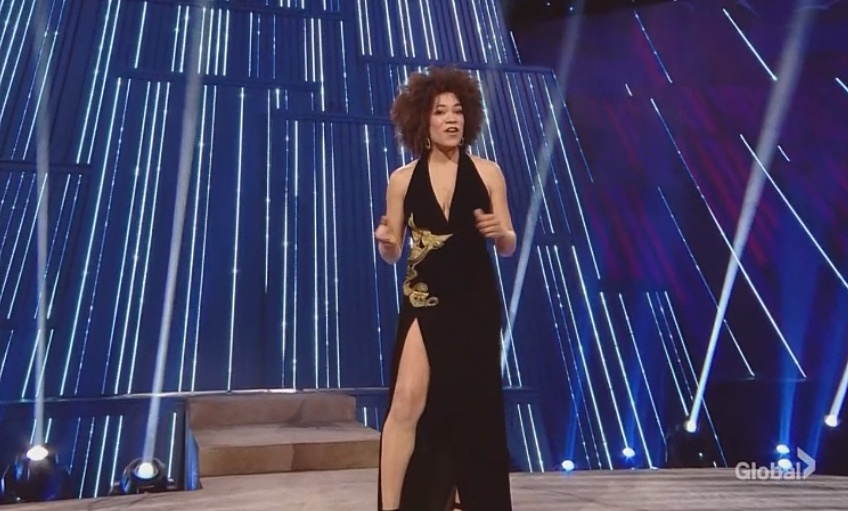 Arisa (what a dress) says we’ll see something this season we haven’t seen before. 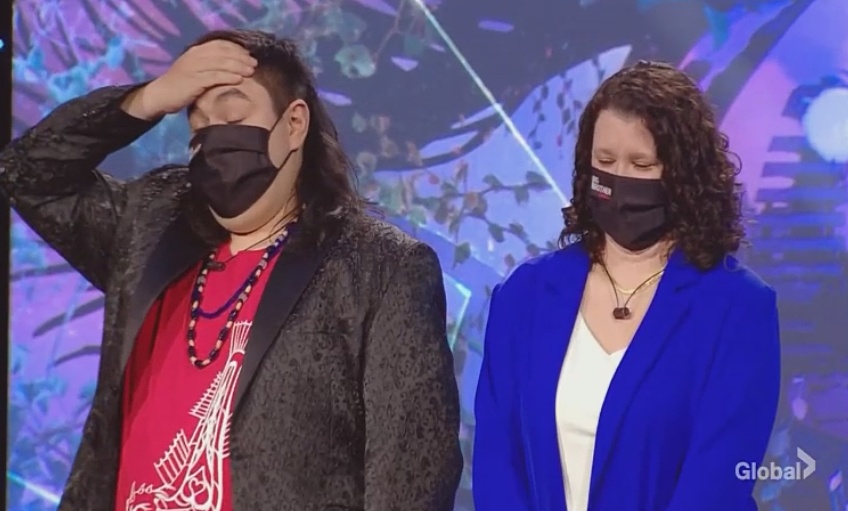 Kiefer and Tina were voted by Canada to be team captains. (Weird but alright I dig it)

3 batches of 4. Surprised there weren’t two vets from last season. 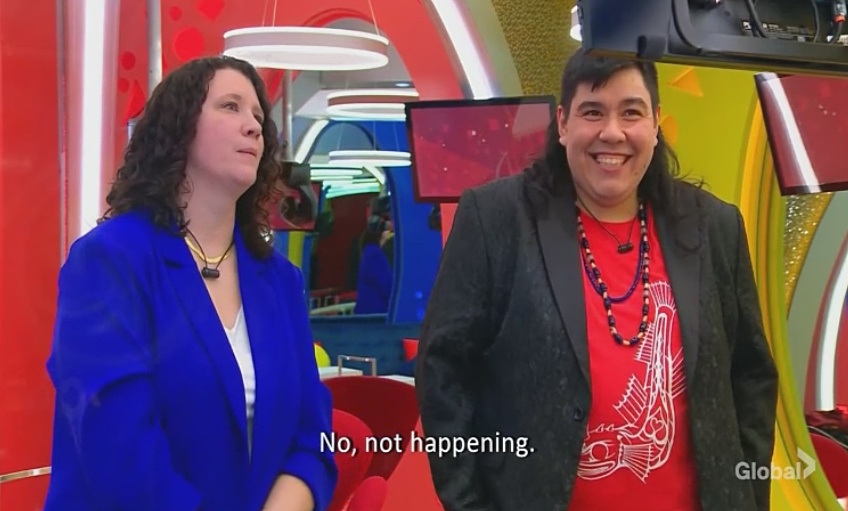 The team captains get some time in a room to view the houseguests as they enter the house. Kiefer offers up “Guys Vs. Girls”
Tina “No, Not Happening” (thank you, Tina) 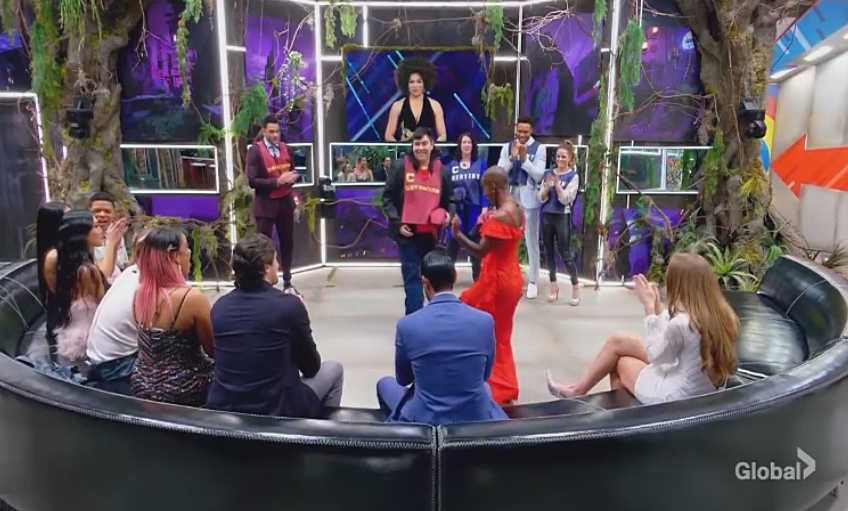 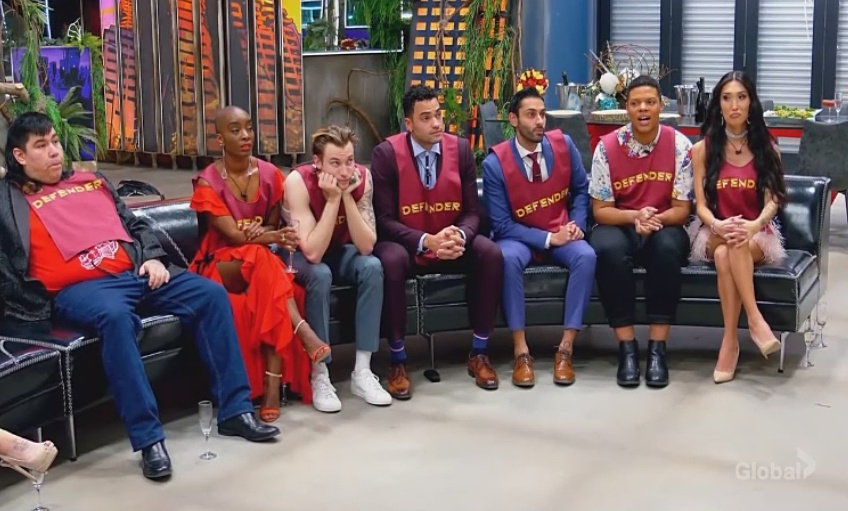 After teams are picked we learn this week there is no Head of Household and Power of Veto competitions. Instead, they will have a team safety challenge. “the stakes are HIGH”

Both captains are safe for the week as is everyone on the winning team. Those that are on the losing team, will be up for eviction.

Safety competition is a mix of endurance and strength. The final three in the competition are Rohan, Breydon and Victoria. Victoria goes beast and pulls out the win. 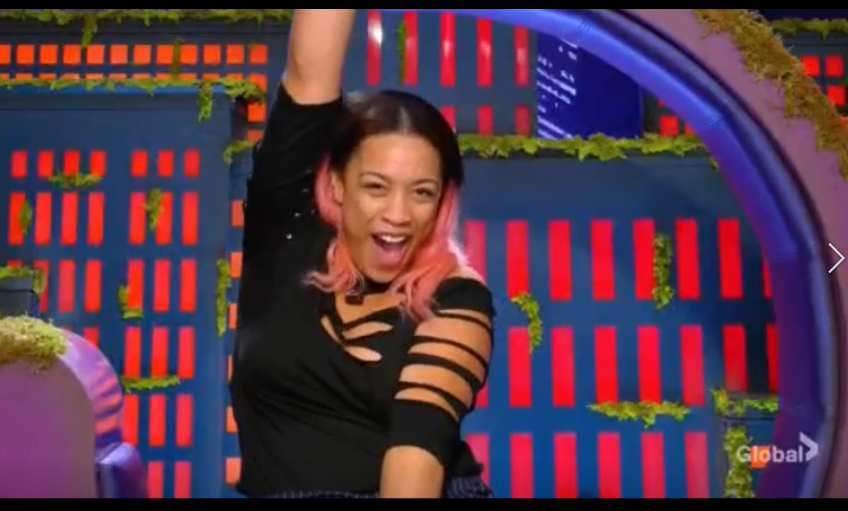 Team Destiny wins! They’re safe and get a feast. Team defender gets slop for a day. 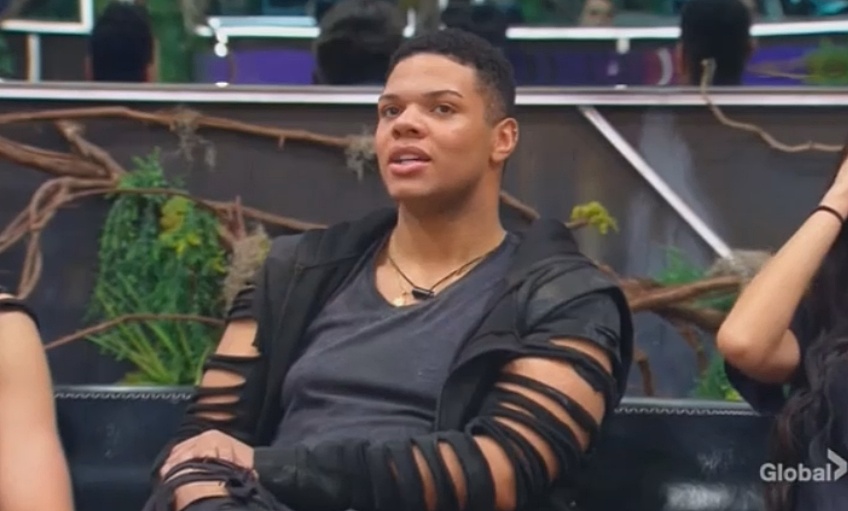 Tomorrow night we will find out who is the first to be evicted.

What a great shake up. It was getting predictable so this survivor style in the beginning is a good way to get it going differently. I’m all for it

I’m so far optimistic about this season. The perfect season for production to ruin with twists.

Thinking Tina’s team is going to destroy Keifer’s at first.

Kiefer’s picks: the bros bro gotcha bro guy, the wants to be the puppetmaster guy, the antisocial loner guy, the cop who is lying about her job so is preoccupied with running her undercover op, the pageant one… and the picked last so has a grudge guy.
Yeah. They’re gonna be a cohesive unit.
Big Eyeroll.

Unknown
Reply to  another name

Lmaooo this is literally so spot on!

Petty good first episode, some interesting characters.
Hope the teams don’t last very long. the game is meant to be played individually.
Hope production leaves the game alone and just lets them play.
The only rule change I would like to see is a ban on huge. majority alliance. It kills the game and makes it too predictable.

First Impressions of some houseguests this season:

Thought about it. This is what I thought of some of them between the opening credits and the time the first comp started. Mostly based on how they interacted with each other once they actually entered the house.

Tera. I’m betting some people are thinking ohhh, she’s gonna be the new mumsie. I’m not one of them. I’m getting a back of my head Christmas vibe.
Rohan. Gonna play waay too hard way too fast.
Kyle3 and Holly. They’ll be a showmance by the time feeds come on. This will cause friction between Holly and another female.
Latoya. The whole i’m going to lie about my profession thing. Haven’t we already seen and documented how going in not being authentic and worrying someone is on to the secret melodrama doesn’t really work for a social engineering game. The social dynamics are hard enough without playing that crap added to the rest of the game.
I know. Some of the viewers were clocking the edit about Josh and Breydon. I don’t see it happening. sorry.
Josh: going to cool prickly instead of warm fuzzy some of the houseguests.
Breydon: going to give Victoria a run for her money on the which one can i only handle in small doses houseguest award once feeds go on.
Austin. She’s really going to go the whole I just want people to like me d/r route? Oh. mmkay. The entire sneak under the radar thing… on a team basis that’s not going to work. It’s not like if her team loses, she’s going to go invisible. Her best bet is hoping there’s a mental comp she can do well in for her team, and prove her value. Because nice isn’t a big brother survival skill when it’s team on team.
Kiefer: too desperate to bro.
Tina: she seeeeems to be playing week one BBcan5 Karen’s game. Let’s see who she chooses to be her thatdamnedkevinrobertmartin. Try to separate the biggest guys, and show quite obviously that you are looking to disadvantage any men’s superbro alliance idea anyone has in their minds.

Quick tally of the people I watched the premiere with (bubble and text ): from the edit only, I asked them which two they thought were most in danger of eviction.
Votes came to this: Jed: 2 Rohan: 3 Josh: 3 Latoya: 1 Breydon: 1.
Nobody voted Julie. Everyone that included Rohan had his name first out of their mouths.

Rumours out that Josh is getting evicted.

There was a quick feed leak, but it just had people getting ready or eviction in the bathroom. Looks like Jed doing Ty’s hair while Julie and Latoya are doing makeup. Sound was (?) Victoria (i think) talking about people she knows that know famous people.

There is also a new clip out about an alliance forming between Breydon, Julie and Austin.
If we think back to season 7 and season 8, there were about 20 alliances formed by the time feeds started.

before episode 2 here is what we know or have heard rumors about leading into the first eviction and a bit of sarcasm tossed in.

Julie Vu evicted 11-2
Josh got the other two votes against. One from Julie the other from Victoria.

So here’s the eviction episode
Rohan going to lay low so they don’t think he is worried he’s being a target. Not what I expected of him. Expected him to try to evil genius his way through with some plot.
Instead:
Josh, making himself the most obvious target. while getting the who is the weak link d/r.

Oh. Somebody has THE MOST obnoxious laugh EVER. Holly, Victoria and Tina talk about alliancing… before V. flashes the cam accidentally.
Latoya is not on team Julie. She’s going to be the guy’s girl. She’s joined the broz. hmm. Not expected. But she has a point that Julie will run her mouth if given a chance. Julie and Breydon had already agreed on Josh earlier. Interesting.
Introduction to the Dolls from the ET clip this afternoon.
Politic-ing about the power ‘struggle’ re: votes and who has the sway in votes this week. They seem to want to have consensus… and are happy there is a tie breaker vote option.
The out of the closets portion of the episode goes through Julie Breydon and LaToya’s stories.
Here we go with the ‘campaign’ aspect of the week:
Josh isn’t clicking or doesn’t realize he isn’t clicking but has an inkling. He’s pushing the brolliance as a prettyboys2 and names Rohan as a target. But it’s going to be overblown.
Julie bigmouths and extrapolates. To a group including LaToya… who is in the brolliance and is already anti Julie.
All of this is going to blow up on Josh.
Meanwhile they are thinking keep Josh as a bigger target ahead of them in one camp.
It’s revealed that LaToya named Julie by Josh. Julie must investigate. LaToya is having none of it.

EVICTION
Instead of canned speeches, it sounds like Team Destiny gets to question the Defender nominees. I actually like the defend your life idea of questioning nominees, and hope that is the case. Anonymous questioning. Interesting.
Question Answer:
Breydon: close connections, does it make you a target? No, it makes him social
Jedson: important to have a final 2? yes, but not yet.
Rohan: possible target, how does it feel? It sucks. bygones.
Josh: assumptions about guys alliance? no. paranoia.
LaToya: Julie question? yes, but everyone got named.
Julie: who is the weakest? Josh. emotional player with a bus.
Vote:
Austin: Julie. (the dolls dead already?) Beth: Julie. Breydon: Julie(dolls are dead ALREADY!).Josh: Julie. Julie: Josh. Jedson: Julie
Commercial and I admit I’m surprised. Don’t think anyone had Julie as prime target. The Broz put in work.
LaToya: Julie Vic: Josh Kyle: Julie Kiefer: Julie. Rohan: Julie. Tera: Julie. Taychon: Julie.
11 to 2 Julie is evicted.

Thanks for these they are great!

Hmm. Is it… a little… creepish to include being the victim of bullying and feeling like they never fit in on the show edit… then out the door? especially for a hg that tried out for 6 seasons.
Admittedly, from the edit Julie had a messy week. But part of me still feels like that edit was taking advantage a bit.
Huh. I had Julie staying until the triple in my preseason plot.
Btw. Destiny won hoh. I think Austin.

From a friend that is an avid TikTokian translated into something closer to english and without emoji.
Takeaways from the julievu tiktok interjulievu:
She understands why her allies A and B voted her out.
She says her error was playing safe today while (gives what I believe to be false credit) to Josh for hustling to turn the vote. (Cough Cough I’ma say LaToya was the maximum drive force behind the vote).
Knew she was leaving when Austin said i love you after voting.
Knew Victoria threw the hinky vote.

There was probably more to it.

Meanwhile on feeds someone just pointed to a couch and said that’s where Julie blew up all over Josh. Josh was first to leave HOH. Everyone else but Taychon and Austin have left.
Taychon and Austin are currently talking about putting Josh on the block. Because sure, taking out all of the weak links on Defender is the bright way to go.
They both (T and A) feel they were targeted specifically during the HOH comp.

Victoria reveals to Tera that Julie was offering final 2’s all day today. To lots of people (? If I’m getting walking emoji Victoria right).