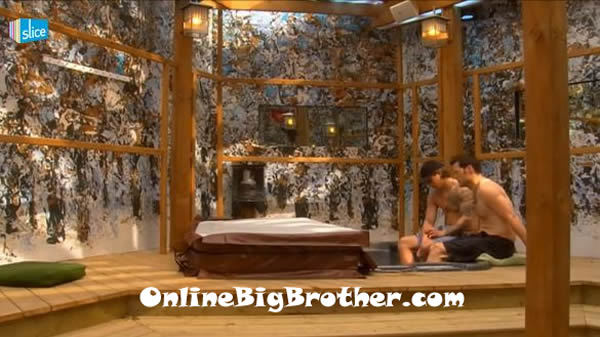 2:40pm – 3pm Andrew and Emmett are out in the Hot Tub room talking. Andrew tells Emmett that if he wins HOH this week he will probably put up him and Jillian.. just to keep it fine with Talla. Then when one of us wins the Veto we will put up Talla. Emmett says that maybe if Talla is out I would just throw the HOH to you and then you do the same to me with the veto. Andrew says that in the veto he could try and make sure Emmett wins it too. Andrew comments how the HOH this week only guarantees safety for that person. Andrew says we just have to make sure Talla doesn’t win HOH, because if she did then we won’t have our final 3. Emmett wonders how close Jillian and Talla are. Andrew says that Talla isn’t as dumb as she acts. Andrew says he wonders if they (big brother) want Talla in the finals .. it will depend on what type of competitions they throw our way. They talk about the competitions that Talla was close to winning. Andrew says that whoever wins the first HOH of the 3 part HOH can basically decide who they will take. Emmett says that he thinks he would have a better chance with Andrew than with Jillian because she has won a bunch of HOH’s. Andrew says and look at me I’ve only got a couple and one was thrown to me. Andrew starts talking about the jury votes. Peter comes out to join them. They continue talking about jury votes and the last season of the US big brother. Meanwhile in the living room: Jillian continues her pedicure. 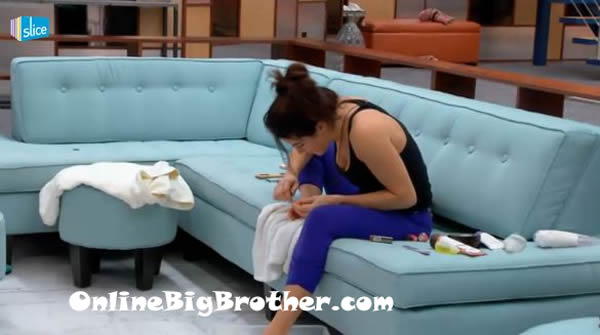 3pm – 3:15pm Big Brother switches the live feeds to the hush hush screen.. The power of veto ceremony is most likely happening now!

“Emmett says that he thinks he would have a better chance with Andrew than with Jillian because she has won a bunch of HOH’s.”

This was Emmett putting his plan (from last night) into motion, by testing Andrew to see if he would bite at a F2 with Emmett. So far, Andrew (thankfully) passed by changing the subject.

I think Jillian is well aware that Andrew is attracted to her (how could she not be), and I think she’s starting to use that to play him a bit. Earlier in the kitchen she was joking around with him saying, “We should get married.” (Because they were both complaining about the dirty kitchen.) I don’t really like that she’s doing that, especially when she already slammed Liza for using guys that way. It kind of makes me think she wants to have her cake and eat it too. It might be a smart game move, but it’s kind of scuzzy, imo.

I’m getting more and more nervous about this returning jury member twist. Is it going to be a game reset (aka: no eviction?) Or will they come in before or after the eviction? I wish we knew more about it.

I don’t think jiliian is doing anything different then anyone else girls flirt just like in real life andrew is definitly interested but she is way to into emmitt. It won’t be a reset more then likely peter will leave and one of the four will return more then likely gary. Andrew is going to be so upset.

I would love to see the feeds of what’s happening in Jury House. Do they do that in the US? Will we get any footage?

The US feeds do not show Jury house shenanigans. :(

If I recall correctly, there was one or two seasons when they would show the Jury House. They would show the person walking in, and you would see the other Jury members reactions to them getting voted out. Then, the evicted houseguest would have a tape/dvd with them, and that would contain the week’s worth of events up until that person’s eviction. The only catch was, the tape/dvd only had the results of competitions (HoH, Luxury, Veto) and did not contain any Diary Room info. As of recent, however, I do not think they show the Jury house, since I am sure not much happens there after the person first walks in.

I think if Jillian didn’t rush into a showmance with Emmett she would’ve eventually ended up in one with Andrew. I just hope Andrew makes it to the end, it would be sickening to see both Jillian and Emmett there, I don’t know why they bother me so much, I guess watching all their makeout sessions turned me off from them.

I disagree even if her and emmitt were not a thing he is way to old for her she is 27 and he is 38 he may like her that way but jillian doesn’t seem to be that interested in him it seems more game play the real where emmitt is more real then the typical “showmane” but he keeps asking emmitt if he see’s a future so you know he likes her he said once bb probably wanted to hook him up with jill and emmitt with danielle.

Did you vote to bring back Topaz yet?

There was no box to click to bring back the BB Hoodrat.

This is just info pertaining to the possible Finale date according to the rules of the contest to win tickets. But you never know, they could change it if winners are agreeable.
FIND YOUR ROAD TO THE FINALE CONTEST RULES
Winner and his/her Guest must be available to travel and participate in the Prize between
Tuesday, April 30, 2013 and Saturday, May 4, 2013 (exact dates to be determined by the
Sponsors in their sole discretion).

ALSO FROM SLICE:Find Your Road to the Finale
This contest is now closed. Congratulations to Nicole W. from Edmonton, Alberta!

If both Jillian and Emmett make it to Final 2 that will be a lesson for future BB Canada players, a lesson that US players know very well, which is: Always destroy a showmance before it gets to the end.
Most of the time the minute people smell a showmance they take action, and when it’s right in your face, c’mon.
I hope Andrew’s plan is to break up the Milkmance if he ever gets the chance, I mean he has to see that there is no way Jill will ever turn on Emm and vice versa.

to be fair…..its a lot harder when both people in the showmance are strong players….not saying it couldnt have been done but it DOES make it more difficult

It’s funny how they are assuming the final is going to follow the US and be a 3 part competition for the HOH, do we know for sure that this is how it will be? And is the returning player coming back into the house or the game? If they are coming back to play, it’s a little late in the game for that IMO, not sure what they are thinking to do that. Be interesting to see how it plays out.

Agreed, I am still hoping the person is only back to cause drama…like Rachelle coming back for 24hrs…