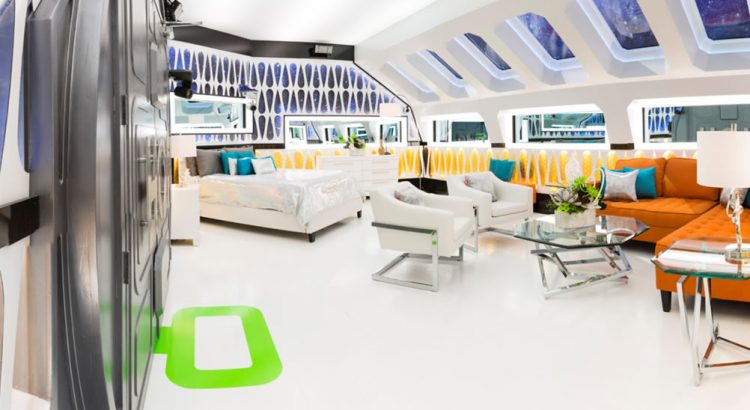 The Big Brother 5 house theme was released today. It’s called the Big Brother Canada Odyssey.  The house looks beyond great! We now know why the cash prize is so low for BBCAN. They spend all the money on decorating the house. Holy cow does this put the BBUS house to shame. The Have not room is one of the coolest I’ve ever seen on a Big Brother Show. The mulit-coloured wall is insane I want that in the OBB cave 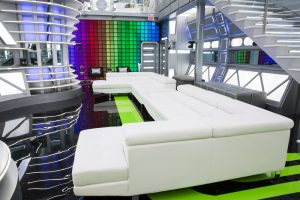 ET Canada had a whole bit showing off the house. Their look around included interviews with competition designer Trevor Boris. They went through a the First Head of Household Competition. It’s an endurance competition “They will be stepping out of a spaceship, doing a space walk. 8 Feet off the ground. hanging by a thread. There may be freezing rain”

Arisa was also interviewed showing off some of the new rooms. There is a starship bridge in the old “Secret room” Arisa said “It’s the nerve centre of the BBCAN odyssey, all the big moves take place in here. All the nominations, all the shockwaves” When asked about twists Arisa said it’s all about “Transcending time and space. That’s what the BBCAN Odyssey is all about. Expect that will play into some of the twists come this season and the shockwaves that are coming” (Crest and OralB are the corporate sponsors this year so expect a Crest shockwave to flip the house every time Gary/Kevin is about to get evicted I can see it now)

There’s a slightly new schedule for those who watch the show.. (We’ll know all theses results well before their air dates but for those of you that like to be surprised days late)

If you are in the US and want to watch the free feeds sign up to Hide my Ass VPN. It worked last year for the Canadian feeds and I used it for the US feeds. I stand behind this service 100%. Here’s a guide Dawg wrote up showing the steps to get a VPN working for BBCAN. Plus every sale of this VPN service supports the site.

We have some special things planned for this season that I’m super excited about. Stay tuned 😉

Hello Simon, I can’t wait! I’ll be reading your updates for sure. I’ve been with you since before BB Canada! Your site is great, and thanks!

This just proves that Canada cares more about their houses than the US does, what a joke.

It looks good to me.

I wonder how they will handle the ‘backyard’, since the hot tub area is the only actual out door area.. astroturf like season 1-3 or painted floor like season 4? space mural on the floor?

Hello Simon! I’m so excited about the new season of big brother!! Do you have any links for us unfortunate non Canadians so that we can watch the episodes live. I’ve seen links here before so l thought I would ask. I do have a VPN so I’m ready for the live feeds. Can’t wait!
Thanks for all you do!

You can try vipleague to live stream

Hey rene! I’ll try a get some links before the show starts. It might be easier to watch this year for online only peeps like me. I’ll post them on the site if I can.

Thanks! How soon before the Monday, Wednesday, Thursday episodes air will you provide links to watch live? I am happy you chose to cover the season. Some great players, I am really looking forward to seeing Neda, Cass and Bruno return.

Hey Simon, Stoked to see you back at it again for BBCan. I know it’s a big job for you. A big thank you from me to you, for all of your updates. I always try and watch the live feeds when I can, but when I can’t this is my go to place plus You Rock! Loving the new House and design, the HoH room is very cool. I can already see Dillon and Dallas clashing this Season – Too much alike I think. I can’t believe how much weight Dallas lost he looks good! Anyways that’s my 2 cents from Vancouver.

That Have-Not room looks BRUTAL. I couldn’t imagine trying to sleep in there.

Yeah…. BB season is back! Thanks Simon and Doug.