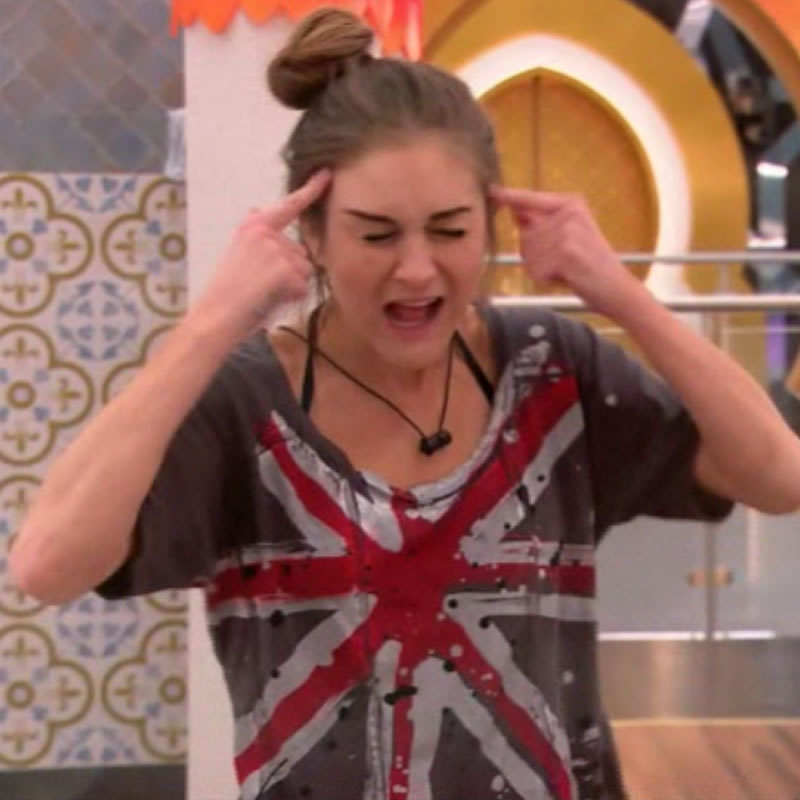 The feeds came on a bit after 10:30pm after being off since 7ish. They again went dark around midnight. Many of the houseguests were liquored up and of course Niki was freaking out.

10:30pm Houseguests get a pool party for completing a task.

There’s plenty of Beer, Vodka, Wine, Rye and food. During the party Niki brings up all the alcohol that has been drank and starts to flip out.

10:41pm Tim and Niki bedroom
Niki freaks out about the rest of the houseguests guzzling down the alcohol.
Niki – I f*** hate those people, I’m fed up
Tim – they are turds
Niki – I can’t believe it
Niki wants to go home, “I hate them.. I hate them I really do”
Tim – do you think you’ll ever get to the stage as I do where you mess around with them
Niki – I like Philip and Mitch F*** the rest.. I like Joel and Like christine but that click F*** iit
She goes on and on for 8 minutes

10:53pm Kelsey and Raul smoking
Going over the Niki freak out and reassuring each other about their 3 person alliance (Raul, jared and Kelsy)
Kelsey thinks Niki is an alcoholic
Kelsey – Did you guys drink all the rye
Raul – We had doubles
Raul and Kelsey both think Maddy needs to ignore Niki, Niki is “So dramatic”
(video uploading)

11:34pm
Niki and Tim agree theres some good people in the house. Tim wants them to start teaming up the people that aren’t associated with the “Cliques”. Niki points out the clique is in power.
Niki – Who gets a cocktail mixer fills it half with Vodka f*** off with it and I get the blame.. how does that work.. then get accused by a 21 year old lying about my medical condition it’s insane. i’m not going to waste my energy with this anymore.. I need another f*** gaviscon after that”
Upon her return she has a chat with Tim and Joel. They think the alcohol was hidden by the HOH crew (Jared, Kelsey and Raul etc.. )
Tim – they’re just high school mean girls
Niki – I’m not even going to attempt to stay one minute longer
Niki adds she wants to try and get Raul out
Tim warns her if she “POkes” him the rest of his clique will come after her.

They played truth or dare. I collected the more prized moments. There wasn’t any game talk

Kelsey sort of playing victim about Nikki going off and pointing out the truth. Hmm. So who instigated it? When someone said the vodka’s empty… who pointed at Nikki? Oh, that was Kelsey.
Perhaps Nikki is an alcoholic, I really don’t know. But hey, a girl on her second or third drink in 20 minutes who says, “I think she’s an alcoholic is there any more rye?” should probably just quietly sip her drink and hope nobody notices.
Not surprised Nikki is slow boiling but getting closer to going off… wait for it. It will happen.
Not surprised Kelsey is subtly portraying the situation so she can play the victim again. It’s been days since the last time she could play weak and defenseless and unfairly treated in hopes that everyone will sweep in to support her. After all, in a few days Jared won’t be hoh. About time for her to cry for everyone’s support again. again… wait for it.

more interesing when you see After Dark and Nikki & Maddy are discussing the last of the vodka, and according to Maddy poured quite a good sized shot into Maddy’s glass, then i watch as she puts the last of the vodka, which amounts to about 1 teaspoon into her own glass. This is while Maddy has finished off at least one glass of beer while in the pool, that i saw, but she walks to the hot tub area with another FULL glass of beer plus the vodka mixed drink in her hands.

but for watching the pool party going on, the doors open up and i swear it was almost a full 30 mnutes before the nominees finally make their way downstairs, dragging their heels. you both on slop, idiots, you think the food out there with 16 people is going to last long enough for you to get out there and get some, not to mention what bad sports you look like. it would be so easy to put the remaining one on the block next time just because it gets the misery out of the house. they don’t seem to remember one of them is still going to be staying, in the meantime they thowing the other parts of whatever alliances they once had under the bus.

i’ve never been a fan of when two who are obviously coupling up deny that there would be any good reason for one or both of them to go up. really, everyone can see what is happening, they might not talk about it out loud but don’t pretend there is no reason to put one or both up like someone betrayed you (kelsey) should be obvious loveita would have put them both up except of the promise made to jared, who really would have looked a whole lot better had he not done the revenge noms, and also honoured the fact loveita stuck to her deal with him and he doesn’t put her up and can easily justify that by pointing out she gave her word, he can do the sAME

During vodkagate, Kelsey started the bottle, pouring for herself and Cassandra. Nikki then poured. then Raul poured. then Loveita poured. then Raul poured again for himself and Cassandra. then Raul poured again. The bottles got just over 8oz. there was a dribble left, Nikki poured it in her glass. Dallas pointed out the vodka was empty, Kelsey pointed to Nikki. then vodkagate switched to hernia talk.
Loveita was in there from the beginning, though i can tell how she’d be missed since Kelsey poured into a shaker glass using it as a pitcher to pour into the glasses, and Raul seemed to think the bottle had his name on it.
It looked like all of the drama led to big brother providing a second vodka bottle. Nikki was later seen thanking Jared for getting a second bottle.

So for the second season in a row there’s a truth or dare type hot tub plot device followed by a feed blackout. Let me guess, production is having them redo certain parts of the truth or dare aspects to get things on camera for the episode that they think will help the storylines they’re trying to develop? Just like last year? Oh. Shocking.

I will never be able to unsee Dallas rubbing his nipples. For your own safety and wellbeing, do not click the gif. #puke

The rappers (Nick & Ramsey?) did a really decent job with the wild card welcoming rap, and Tim told them he was impressed.

But playing the hosts in charge welcoming the guests from foreign lands, yeah, that ship has kinda sailed.
Wishful thinking on the part of the powers that (would) be.

Nice site. But how come no HD clips? If your running Windows 10 the Xbox app should record in HD no problem, that’s what I do. Also if you have to tag at least put in in the corner over the DVR maybe?

Simon and Dawg you guys are doing a great job this year. Keep it up, your videos are a life saver.

Thank you! Its nice to hear that the work we do is appreciated. I think some people lose sight of that fact that we invest an insane amount of time into providing free content and the sad reality is Big Brother Canada just isn’t as popular. In order for things to continue we need the fans of OBB to help support the work we do http://www.onlinebigbrother.com/about/how-to-support-onlinebigbrother/

Seems to me Kelsey is jealous of Nikki. I also think Kelsey feels threatened because she’s slowly realizing that the world doesn’t revolve around her like she hoped. Looks fade girl. Your ugly personality and character will last a lifetime.

What on earth does Kelsey have to be jealous of in regards to Nikki? What has she done to imply she thinks the world revolves around her?

Whether you or others like to admit it or not she’s not an idiot. She knows what’s she’s doing, and for somebody recruited she hasn’t done too bad. Heck she has better strategy sense than Jared.

And you’re one to talk about ugly personslity and character considering you’re calling a woman you don’t even know a slut. Instead projecting your own personal issues onto Kelsey you should reflect on her gameplay and dealing with your own issues.

I admit I have not watched the UK BB shows but, was excited to see Nikki (I voted for her )the promos showed her as a wild & unpredictable girl, not sure what happened to her because all I see is an insecure person that does not have the temperament / personality to be in the public eye. This girl is wacko and needs to go home for her own sake. I was so hoping she’d put all these catty girls in their place but, all she does is whine and complain……I know it’s early yet but, I hope this season picks up soon

You can watch the BB UK season 7 on youtube. It was 2006 and Nikki was a real cutie, but with the same attitude she has now. Freak outs, complaining, wanting to go home (but not really). It was a really fun season, worth a watch. Keep in mind they play a completely different game over there. No need to strategize or form alliances.

To be honest, I do no even blame Nikki for being mad about that. How are you first off going to hog the drinks, and then let someone else take the fall for it?

I just love, love Nikki. – Says it like it is and owns it. You either like it or don’t. Kelsey and Raul are nothing more than a couple of useless drunks in the house you got a taste in the clips above especially with Raul hiding the Rye. You could see their demeanor change with their speech – I wouldn’t be surprised if they even remember what they said or did at all that night! I would love if Tim and Nikki start gathering a few loyal soldiers to their side to backdoor Kelsey and Raul. Having those soldiers do the work so they are protected for the time being. Let the back stabbing begin. Team Nikki and Tim!

LOVE Nikki, this is gold. She won’t win cause she’s too straight up but I really hope she gets an HOH hahahaha
Tim is playing great too.
I really wanna see Raul and Kelsey nominated. Maybe Jared as replacement.

i want to see raul and dallas nominated

that will happen if tim wins hoh

that would be some great tv

Who’s the hot guy supposed to be this season??? Jared????? My 11 year old son is more toned than these guys. This should be a clothing mandatory season!