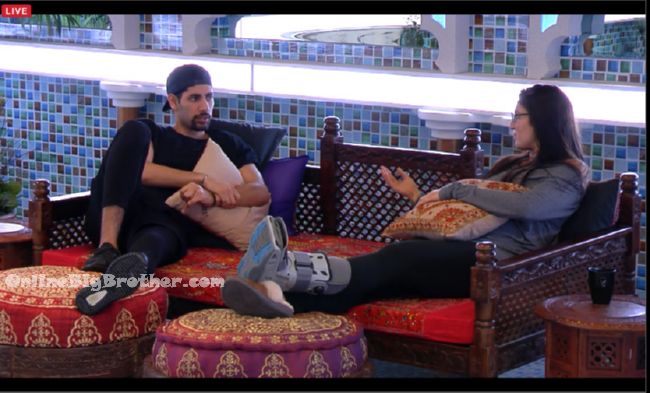 Jared and Dallas cam 1-2
Jared loves corn on the cob
Jared – I’m so lazy bro
Dallas – Bro I feel like sh1t.. there;’s nothing here .. drives me nuts
Jared leaves, camera follows him to the bathroom where he meets up with Raul. Jared brings up Phil coming up to him saying he’s going to stay good with Dallas and them. Jared – “He basically told us he’s playing both sides.. I don’t think so… you kidding me”
Raul – are you sure he’s playing both sides.

8:40pm Dallas, Kelsey and Dallas hot tub Cam 1-2
Jared says his dad was the athlete of the year in his high school. They chit chat with Dallas, After he leaves JAred fills Kelsey in on Phil playing both sides. JAred says Phil is a “MASSIVE FLOATER”
Kelsey – at least he’s coming to you telling you what he’s doing
Jared wants Dallas then the brothers out.

Jared – Tim does not like the brothers, he openly picks on them.. openly makes fun of Loveita to
Kelsey – Dallas and Loveita need to go first
JAred – it can be argued ya.. Dallas first though.
Kelsey is worried if the wrong person wins HOH they’re screwed.
Jared says Mitch, Raul, Kelsey, him and Tim all fighting to get the HOH

8:30pm Nick and Loveita dancing Cam 3-4
For you interest

8:50pm Cassandra and Ramsey Pool side
Cassandra says she would never do what Loveita did to her.
Ramsey says Dallas betrayed him once, he’s not convinced he wouldn’t do it again.

Casasandra asks him who he would put up.
Ramsey doesn’t have anyone right now, “At this point it’s leveled across the board”
Says he wouldn’t put up Maddy, Tim and Miki.
Hints maybe Dallas, maybe, Jared, Kelsey, Joel, Raul.
Cassandra won’t tell him her targets.

Cassandra says her leg is sprained she hopes teh brace comes off soon. She’s worried she’s not going to be able to compete in the HOH, “I thin it’s going to be a double”

9:30pm cam 1-2 JAred and Kelsey hot tub
They talk about Jared’s poop. Sounds like all the guys have gas from the food, it’s a major conversation piece.
Ramsey joins them. JAred and him agree to “look out for each other”
More houseguests filter in changing the conversation to chit chat and “Not it” 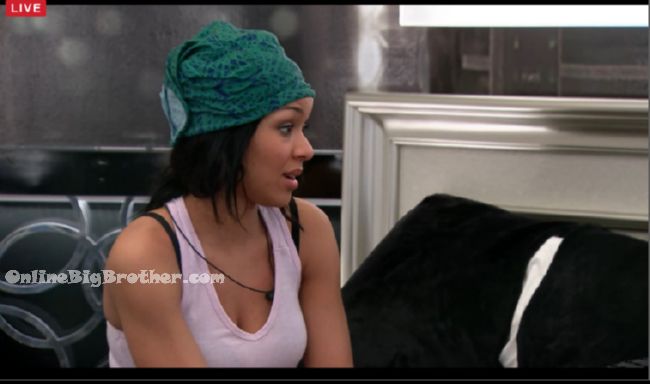 12:30am Loveita and Niki
Niki says that Tim has a extremely high opinion of himself.
Niki – the only way to engage in conversation with Tim is to ask questions about himself and he’ll talk to you all day long
Loveita – he’s being mean
Niki says Tim isn’t going to change his mind with his vote. (To keep Cassandra)

Cassandra and Phil
Phil says if the vote was today it would be 7-4 or 6-5 or 8-3
Cassandra says Joel has been acting sketchy.
Phil – Maddy voting with us
Cassandra no
Phil – she’s being really nice to me today
Cassandra – she’s starting to realize she’s in the minority.
Cassandra brings up the HOH being a double says she’s going to fight for it.

Kelsey, Cassandra and Jared
Jared tells Cassandra about Phil playing both sides. Cassandra talks about Joel being sketchy and annoying. Jared reminds her to be nice to him he’s a vote.
Cassandra – “he follows me around I’m going crazy”

Mitch and Joel
Joel says he’s still with keeping Cassandra.
Mitch says that’s his plan, “Honestly I still haven’t talked much to Christine and I think she’s neutral but I know Cassandra is not on the side of Dallas”
Mitch says he wants MAddy and Dallas to not switch their votes because he wants Cassandra to know they voted her out solidifies the sides, “I would rather a 7-5 vote”
They agree the brother are for keeping Cassandra.

Joel, Cassandra and Phil
Studying… Leads to game talk in the second video.


1:30am Phil and Christine
Tells her Dallas and Loveita are working hard to keep Christine.
Joel joins them, they give her some advice to stay in the house.

Thumbs up if you have problems getting the pages to load. Thumbs down if you’re not having any issues. Personally I’m having a few issues but don’t know if it’s the new EDGE browser?