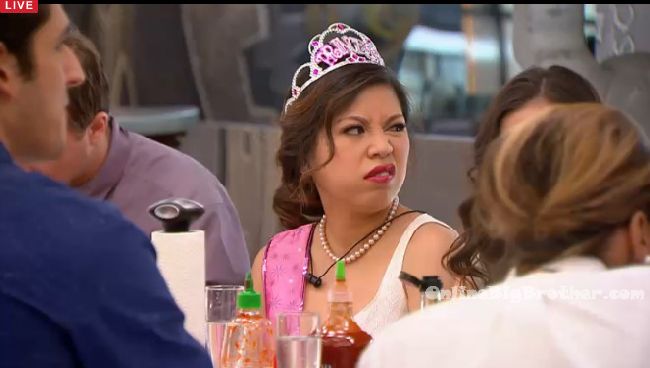 3:30pm The live feeds return – All the house guests are sitting around the table eating. They’re having a birthday meal / celebration for Sindy. Everyone is dressed up. Sindy is wearing crown and a sash that says “birthday princess”. Sindy says Zach you’re next! Zach says yeah next Wednesday! (Zach’s birthday.) Sindy says thank you for the meal guys! They talk about past competitions. Sindy says this is the best birthday ever!! Zach says everyone’s birthday’s have been after they day. The conversation turns to talking about how the camera incident ruined Johnny’s brithday. 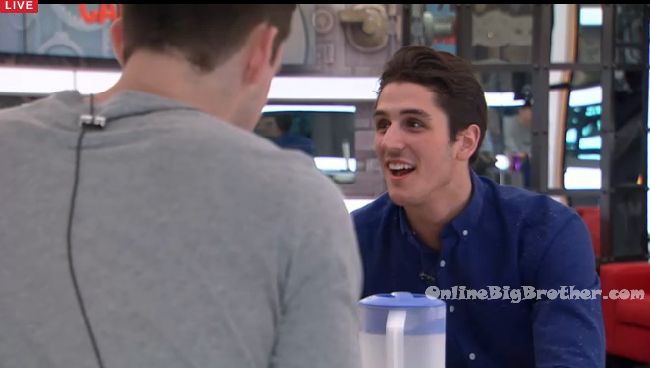 4pm In the storage room – Zach says the week is almost over! Willow says I want to win HOH so back! Week 5! Zach says I hope you win one tomorrow! Willow says thanks! 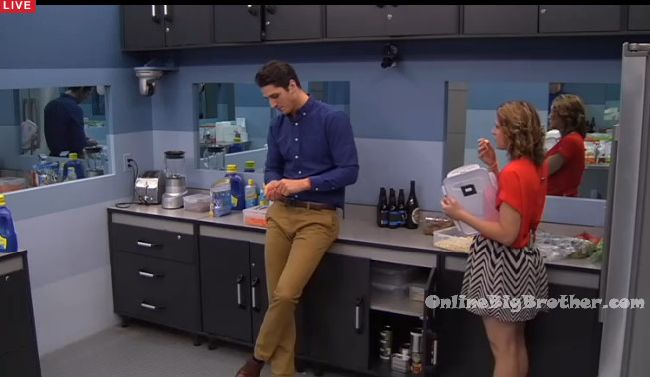 4pm – 4:15pm Sindy gathers everyone in the living room. (For her pageant 101 class) She says she’s just waiting for Willow and Ashleigh to come. (They’re cleaning up after her birthday meal.) Sindy says “You guys can clean later.”Sindy says welcome to Pageant 101. She tells the ladies we don’t cross our legs you tuck one behind so we don’t see your vag!n@. She then teaches them the proper way to wave, pose and walk.

Jordan why is Canada the best country in the world? Jordan says “Canada is one of the best countries in the world because we are a house locked off from the world and a nerd like me can go up to a pageant queen and say will you be in a showmance with me?” Jordan gets down on one knee. Sindy says yes! 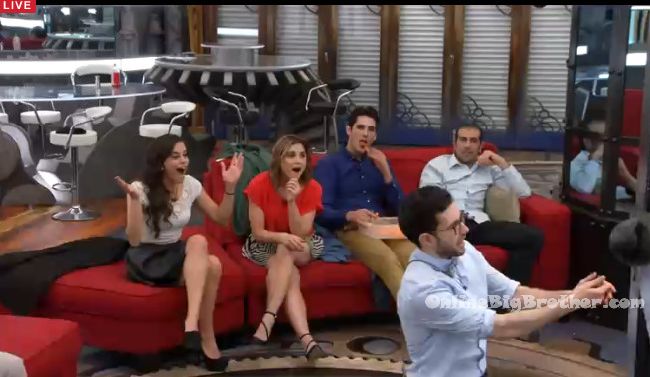 4:30pm – 5pm Big Brother blocks the feeds. When the feeds return – In the bedroom Brittnee is talking to Sarah. Britt says that Godfrey said all I need is Brittnee and Sarah’s vote. We just need to get in a room with Bobby, Cindy and Sarah. That would be 5 right there. Sarah asks if Sindy can vote this week. Brittnee says I don’t know. Everyone is just kind of assuming she can. We need to have a backup plan. Lets secure mine, your, Sindy and JP. That’s 5 people that want him up. Sarah says but he’s not 1 person ..he’s 7 people.

Zach comes out of the diary room and tells the house guests to gather in the living room. “House guests you have all kicked butt in the competitions this season and to reward you we would like to show you some of the greatest moments”

Big Brother then shows highs from their past competitions on the living room tv!

In the bathroom – Sarah and Sindy are talking. Sindy says if I can’t vote then we abort the plan. They didn’t say I couldn’t vote just that I couldn’t play in the POV. 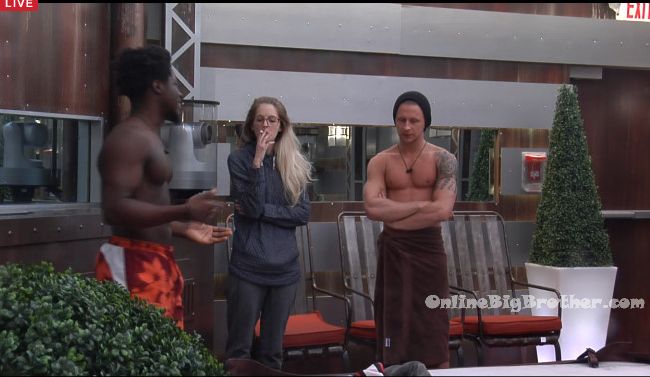 Out in the hot tub room – Sarah talks to Bobby about how Jordan has been lying to her. He knew he was going on the block. Bobby says oh yeah he knew. He and Zach are so close. Sarah says If I do this you’ll know you can trust me. But if Sindy can’t vote… Godfrey joins them. Godfrey says I don’t expect you to give me 4 votes and then.. I know you had my back. If its an eight person vote because she can’t vote then I know Zach would send me home if it was a tie. Godfrey says these guys have told hundreds of lies about me. Bobby tells Sarah to talk to Britt and Sindy. Godfrey says once we do this …we’ve earned the respect of the fans you know. The only reason they put me up is because they knew I wouldn’t go after Bobby and Bruno. If I stay we can tear this house up! If I stay I am going after Zach… Sarah says that she knows the girls are already on board with it.

5:15pm In the bedroom – Willow, Ashleigh and Bobby are talking. Willow is questioning Bobby about what Sindy was talking about in the vault. Bobby says that he thinks Sindy wants to keep Godfrey. Willow asks I though she was in love with JP? Bobby says I don’t know. I tried to avoid talking game with her in there. Willow says she thinks Sindy is coming after her. Bobby says Sindy has to go next week. 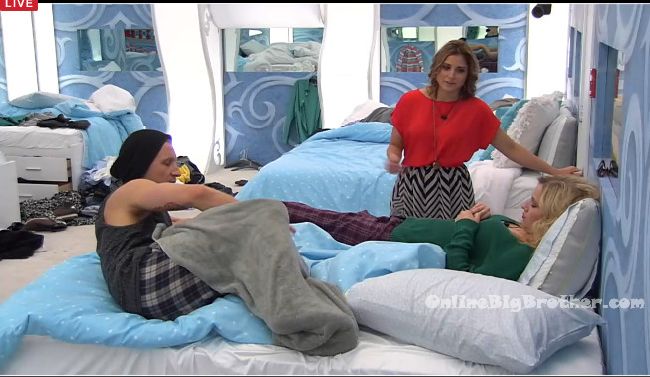 5:20pm Bobby says when we were in the vault I waited until Sindy went to the bathroom and started searching for all the numbers. He says I searched the bedsheets…they had little numbers on them… Big Brother tells then to stop talking about production.

Luv the whingy birthday princess screengrab. Dawg you are merciless.
Zach could be evicted on his birthday next Wednesday!!! Ashleigh too if double. Who’s gonna pull either of them off the block now?

Zach has a small penis! I knew it!

I don’t remember typing this. Do I have an imposter?
On a sidenote: Why is Bobby running his mouth about Cindy with and S? Leave it to the village idiot to f**k everything up!

Urgh…go eat poop…feeds cut every couple minutes and don’t come back for hours…. Every single time….

Can domeone tell me what was fake…….memorize the numbers

No one knows .. the feeds were blocked for an hour and a half .. they came back for 15 seconds and then were blocked again for hours after

britnee and sarah are talking about how they cannot trust JP since he lied to them
when did he lie to them?

hey anonymous, just a speculation, but sarah and britt have said to jordan ‘do you think the couples are an alliance? do we have to worry about them?’
sarah point blank said ‘are you in a thing with Ashley and Zach because the three of you had meetings late every night, that I wasn’t allowed to be involved in.’
Jordan answered no to both.
but apparently Bruno and sara talked?? (sarah says well Bruno and I talked, and…before bobby interrupted ) who knows what they shared.

as much as sending JP home be a big blindside, the SSB needs JP

And Bobby ruined whatever chance Godfrey had. Why in the hell would he tell the showmance of the HOH that they are attempting to do a blindside?

Because he’s one of those “the light’s on but no one’s home” kinda people. At least in the BB game.

What an effing idiot he is!!!

Ok here we go, Bobby is going to ruin the plan by telling Willow who will go and tell Zach and the plan is going to be effed up. Don’t get your hopes up people, this is just for tomorrows show to keep us guessing who will be going home, we all know it’ll be Godfrey leaving.

I thought Bobby covered that pretty well. In his style only, he couldn’t remember it well, maybe she was just feeling him because of Sindy/JP, she tried to talk game…but you know me I don’t talk game, etc., etc.,.
Both Willow and Ashliegh looked puzzled and confused.
Had he said Sindy didn’t talk game or try to feel him out on his position or thoughts in the house dynamics, then Bobby would have seemed sketchy.

hate how bobby is telling Willow that Sindy wants JP gone. Now she’s going to tell Zach and there won’t be a blindside

It doesn’t matter if this happens. They (Zach) will all write it off as she’s going up anyways. Who cares what she thinks. This could also draw heat away from SSB’s plan by redirecting it to Sindy.

Maybe Bobby isn’t that stupid and maybe Sindy gave him some direction. We don’t know what happened between them in the vault.

Did anyone watching the live feeds see the look on Zach,s face when everyone was talking after watching the clips? He was shooting daggers at someone, and everyone congratulating each other and he wasn’t the centre of attention for once. And then Willow asking Bobby what he and Sindy talked about in the vault while the two of them were in the bedroom? Like the jerk he is he said that she is trying to get rid of JP. This guy hasn’t got a clue…….he left his clue in the Clue,s Closet I think.

Always, that one dumb a$$ player ……… really, Bobby is still so sure about the chop / chop. It’s so difficult to have conversations before the comps. I hope the HOH winner tomorrow is Sindy!! Otherwise, it’s going to be crazy. Or, hoping if it’s JP he puts Zack as a pawn just because. You can’t tell me that nothing happened in the vault …. guess we will know tomorrow.

Why bobby!? Why would you do that?!? The worst is that they are trying to save his ally!!! Please don’t let that ruin getting JP out!!

Does anyone know if c(s)indy can vote? This is my first year of watching bbcan

i personally don’t want JP to be blindsided. i think he should be given a chance, just like godfrey, to really plead his case. if JP knew that sarah and bobby were considering voting him out, im 100% sure he would flip around and say that he’s going against zach too, just like godfrey. apart from godfrey targeting zach, there are no real benefits to keep godfrey for sarah and the girls. he’s working with bruno who’s targeting sarah…

Yes I said it

Ugh! Bobby!
To be honest that idiot looks inbred! That’s why he’s so stupid.