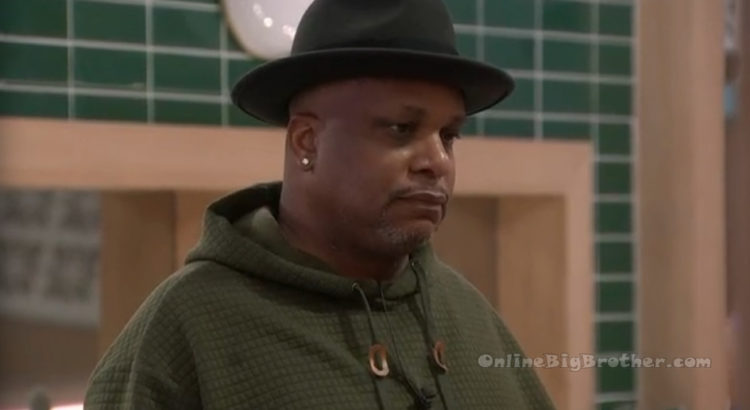 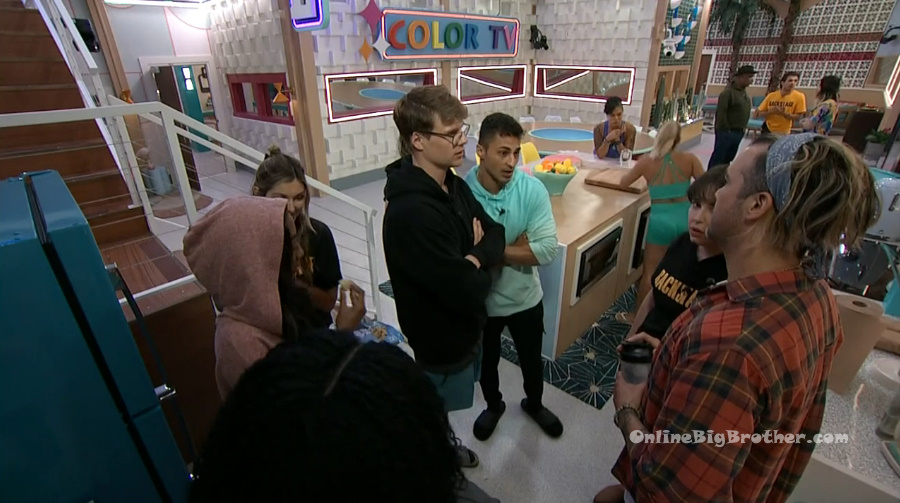 Kyle – I really don’t think I’m going to be able to recite those lines.

Kitchen – Pooch, Turner and Terrance.
Pooch – if anyone in this house knew how those two (noms) were I would be really surprised. I don’t want to be ignorant and make me sound like a dumba$$ but I would be very very surprised if anyone but Daniel knew the two especially with the first HOH. You don’t want to be the one to leak.. I mean that would cause more chaos. Its just nobody knew. Turner – at least it also wasn’t stemmed out of a vendetta. Nobody was attacked personally. No bully thing. Terrance – yeah … now just play. I’ve got to start the conversations. Pooch – for sure, its a big part of it. You can’t be panicked .. I know you’re not .. mister f**king cool over here. 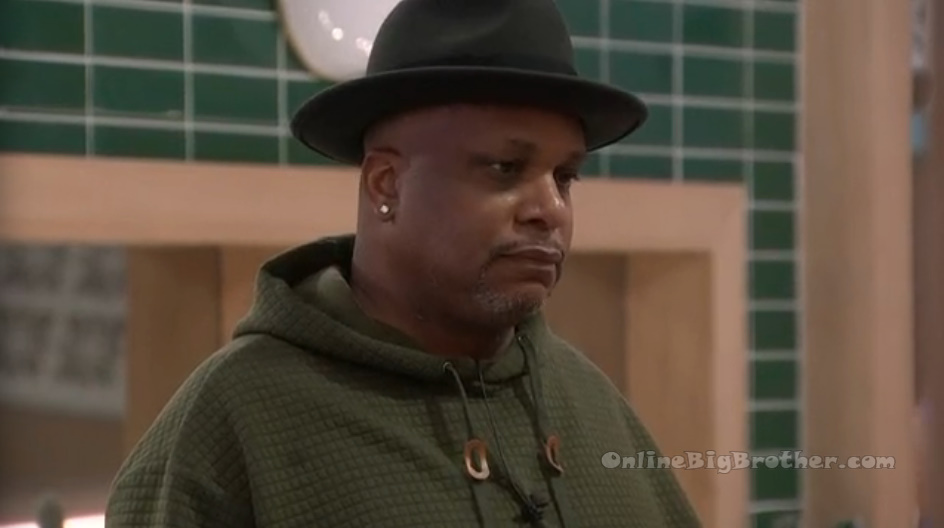 HOH room. Joe, Alyssa and Daniel.
Daniel – and no matter who Pooch chose for Backstage it would be the same situation. Ameerah joins them and says thank you to Daniel. Daniel – you’re welcome. I really hope that made sense to everyone. I talked to everyone at least up until today.. The HOH doorbell rings. Daniel sees that its Michael and asks the others to leave to talk to Michael. Daniel to Michael – I ..heartbroken .. like verge of tears seeing both of you. Michael – I could tell seeing you up there. Daniel – that was not fun. Watching all the seasons before this I never imagined it like that .. the two hours leading up to it. Big Brother switches the feeds. 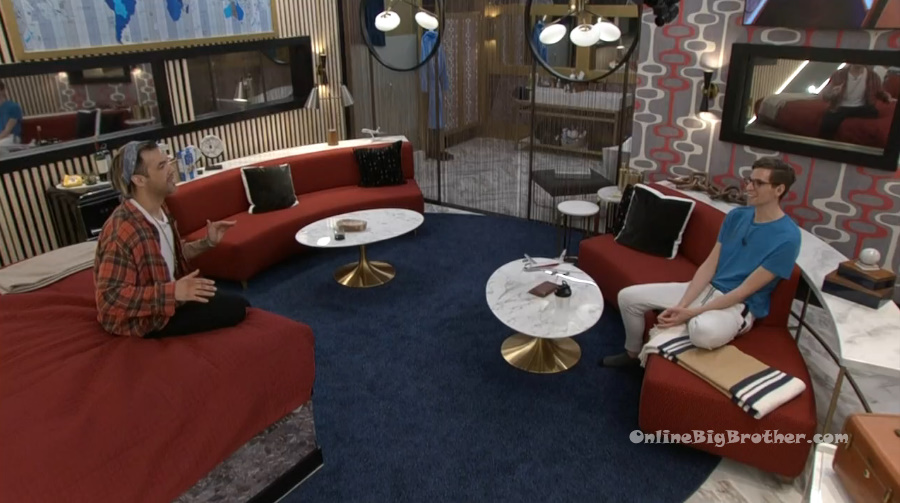 4:50pm Storage room. Joe and Monte.
Monte – I think we had a good conversation. we spoke logic to him and its hard to really defy logic when it comes to when you put up someone who is a physical threat .. next week you’re bound to have.. Joe – I am not even going to lie .. the majority of the physical threats, I am getting tight with all of them. That would have rubbed me the wrong why if you were up there and you went home. Monte – it might be a bold move.. Joe – Michael or Terrance? Monte – if one of them wins the veto or someone takes one of them off .. like is there a backdoor strategy. I mean you just have to think about it. Joe – we’re not really off that block until Sunday comes. Monte – exactly! Joe – I will be really, I don’t want you to go home. Ameerah and Paloma join them. They talk about being relieved. Joe – it looks like a fair play. Like I can definitely see why he did that but there is still the veto comp. Monte – I am still curious what Daniel says .. like I am personally going to ask like yo do you want me to win the veto comp… and his response will be very telling on what his intentions are. For me of course I want to ensure my safety but I also don’t want to .. like get.. Joe – backdoored. Monte – yeah. Tylor joins them. Joe – Michael is taking it pretty well. Monte – Terrance is pretty down. 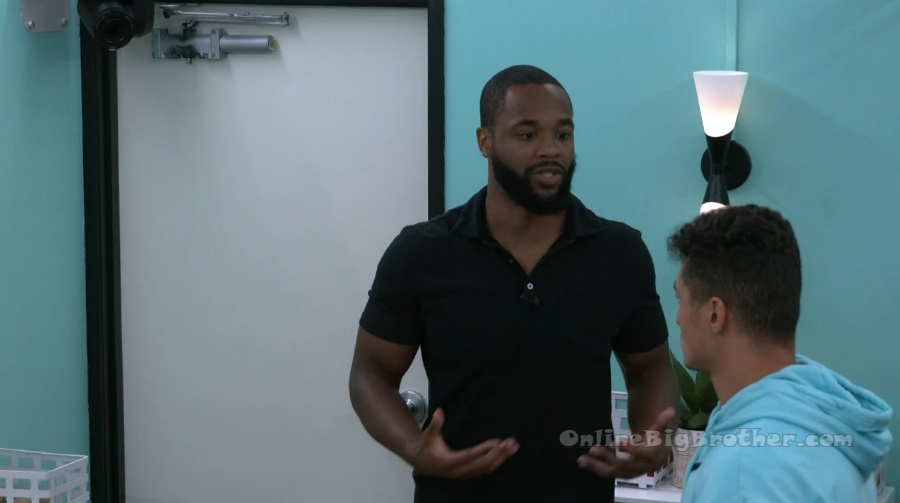 4:53pm Bedroom. Jasmine, Alyssa, Brittany and Ameerah.
Ameerah – we still have the veto competition .. but you know what girls we’re safe. Jasmine – I think I came up with a name for us. What about like .. you know how girls are called Honeys. What about like the HONEYCOMBS? Ameerah – I like it! I love it! Alyssa – I love it. 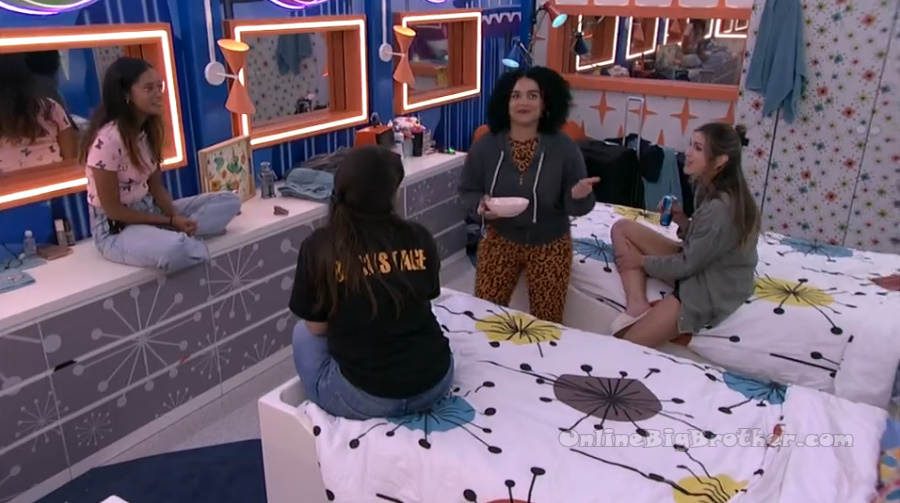 5:03pm Bedroom – Brittany and Ameerah.
Brittany – how are we going to win physical comps? Ameerah – I don’t know. Brittany – how are we going to get our six through? Ameerah – I don’t know. They’re not all physical comps as we know. We just have to DOMINATE when they’re not physical comps. Brittany – I think we can. Ameerah – I think we can too. This week is weird because we don’t have half of y’all. Originally I was seeing Pooch and Monte together all the time and now I never see them together. Brittany – Pooch and Turner. Ameerah – Yeah, they seem like they’re friends. Brittany – its like how could they not .. living in that havenot room having that shared experience. Joe is a sweetheart. Ameerah – I know. Its weird because I am glad that he is not up for eviction because I like him. Brittany – I like him a lot too. He is a really genuine person. He said that I reminded me of his sister. Ameerah – he said that to me too? Who else had he said that too. Is he saying that to all the girls. Ameerah – lets see what they (Michael / Terrance) offer us. Let them come to us. 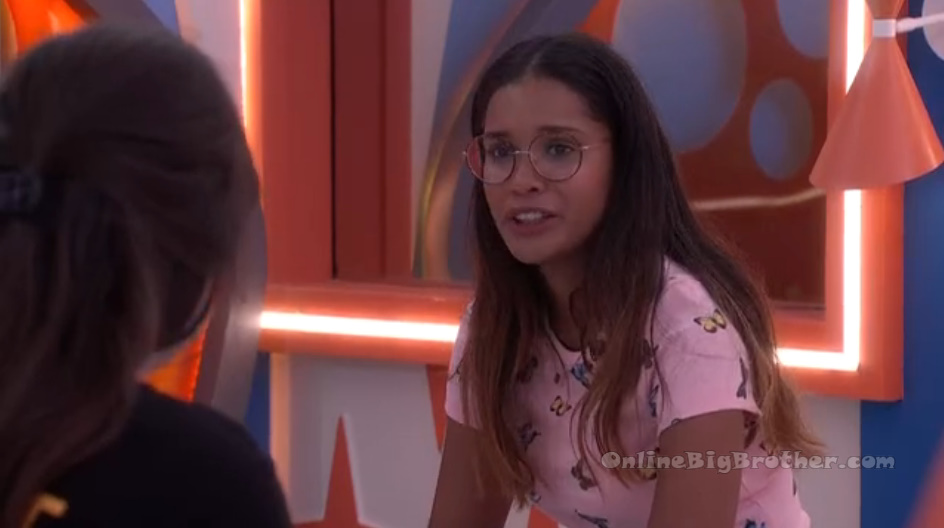 5:20pm Michael and Terrance.
Terrance – I don’t want it to be where one of us come down and then we both can’t be safe because in theory I would hope that the other one nominated is the one that goes. Michael – Mmmmhhmm. I didn’t know if I was going to cry or be angry. Like it hasn’t really set in. Terrance – yeah it hasn’t set in with me yet. Michael – and I don’t think he had a really good reason. Maybe there is a backdoor. Terrance – I really do feel that there are bigger threats than me and you. Michael – maybe he did base it off that first competition. You were second in yours and I was second in mine. Hopefully come Thursday we’re both still here. And you never know with the backstage thing. Terrance – that may play a big part in saving us. The way they said it is they can’t be nominated, they can’t be a replacement vote you know in the veto… but their game is still in jeopardy. Michael – so there has to be someway they could still go home. Terrance – Pooch is safe but the three girls are in jeopardy. Michael – I really hope people don’t treat us differently.. like oh they have the plague. Terrance – I know. We just have to play for that veto. 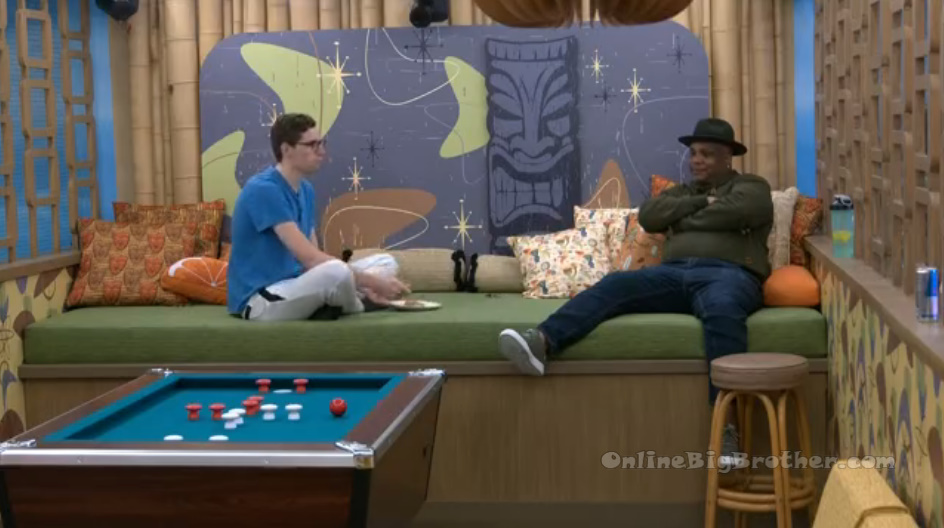 Storage room. Brittany and Pooch.
Brittany talks to Pooch about how she’s in pretty much the same situation as he is in. She says her privilages (voting) was stripped from her. Pooch – I am really glad that I made the decision I did because it could have really messed up my game. I’ve never had to make a decision that important that fast in my life. Yeah I would be safe this week but if I made the wrong decision, next week I would be gone. Brittany – that’s what I was thinking. I was like what do we share in common. What do you think it is going to be? Pooch – I truly don’t know. I watch the show and feel like I have a decent head on my shoulders but this is crazy. The thing I could think is if someone is a third nominee .. it could be competition with you three for something. I thought maybe a luxury.. like someone could pick safety or a luxury. They might say like Pooch you can replace someone with someone. Like they said I had power, I might have even more. If that is the thing.. I am keeping it how it is. Brittany – yeah.. and think about it you’re the backstage boss and I am backstage. I want to thank you.. like a thank you is in order. Pooch – I hadn’t had a conversation with them like this.. You’re the first one that has done it so I appreciate it. Brittany – You should talk to them too. Pooch – I will. Brittany – I hope you don’t think anyone is holding a grudge because no one is. 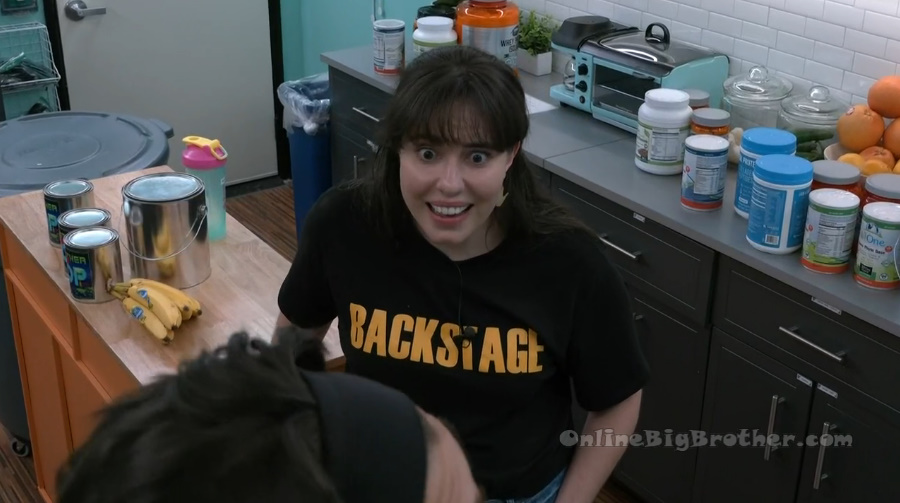 We saw that coming. I’m intrigued with the backstage plot.

My gut tells me that one of the backstage girls will be a third nominee and get evicted. But we’re only on day two so who knows who’s going to make themselves a target? I don’t even know who I would want to go at this point.

I’m just going to enjoy the first week of bliss and chaos, make my America’s votes at the end of the week and hopefully get this season started with a bang.