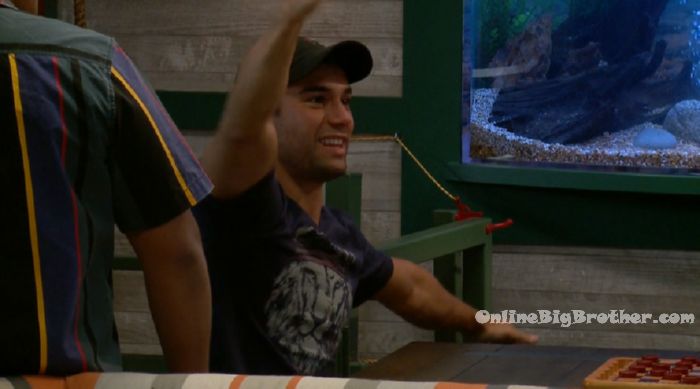 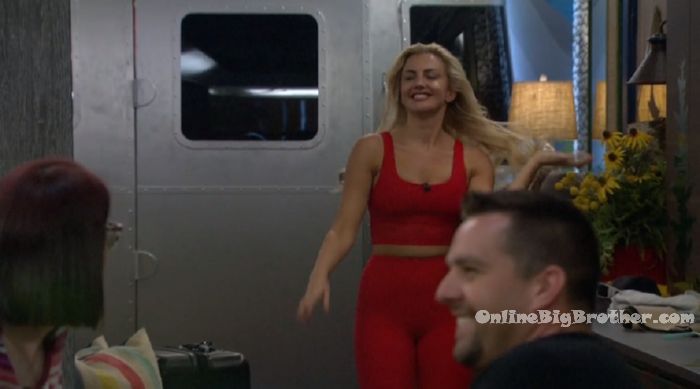 Below is a feed leak from this afternoon:

2:02pm Living Room. Nicole and Sam are talking about working day shifts or night shifts. Sam prefers night shifts because he can have 5-6 hours of sleep and be good to go but if he works day shifts he needs 8-9 hours of sleep. Kat comes out of the bedroom and Sam tells her she looks great. You’ll do fine. Kat – I know America likes me! Nicole – How could they not?!

2:09pm Bedroom. Kemi and Isa are in the bedroom tidying up.

2:12am – 2:14am Isa, Tommy, Ovi and Nick are chatting at the checkers picnic table. Tommy tells them all about the cut the mozzarella” song. He shows them how you cut the mozzarell to the beat using your hand as a knife. He says he hopes they play it for him when they get out. Isa – you should ask for it when you win HOH. Tommy – I already asked for the Pretty Woman musical soundtrack. 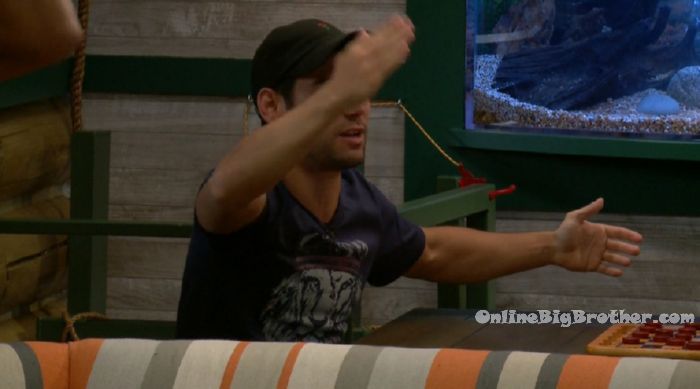 Tom is a Canuck

I think Jackson watched the latest Big Brother Canada and will be aiming for a strong Bro alliance. He will keep them as his meat shields and target the people he thinks voted for Jessica instead of him (mostly the women). He probably doesn’t know for sure who voted for her unless people self-proclaim to him.

jessica has a huge target on her back.

another name
Reply to  Tom is a Canuck

i doubt he had to watch bbcan7 to come up with the idea of bros gonna bro. it’s prevalent that boys systemically have been raised with the alpha status team/pack dominance perspective whereas girls have been predominantly socialized via disney princess vs. the evil witch tropes to require the aid of the prince and consider the other girls threats in numbers.
i assume he throws the other people that volunteered for the camp director role into the woods so that he doesn’t alienate any of the voters that one can guess without much resistance he has already made promises in order to get their votes. so what if the house skuttlebutt via audio leak is he made the same promise to the other tributes.

I guess I lean more towards sweet although I wish it just made the loser the third nominee not 100% evicted like it seems happened to the loser..

Pre-feed evictions are dumb. I’m thinking the winner of the competition wins HOH

My only concern about the camp counselor power is what happens to the forever banished person’s spot. If some previous player comes in then it’s stupid otherwise it’s just a lovely power that makes you piss off at least 3 folks in exchange for a single week of safety. I wonder if they keep doing the camp counselor each week with different powers…

I actually like the camp director twist (far better than a camp counselor idea). It definitely proved to be quite a revealing way to start this game. What I learned through camp director campaigning, voting, and handling of the twist (in no particular order):

Jackson- I already suspected this mama’s boy to be a power hungry type. He walked in the door ready and determined to win… a dominator. While I like that he is there to play, I suspect he could be this season’s “puppet master”. He is slick with his words and can mold that clay. Yet, he now has a target for playing so hard and banishing the others that campaigned against him. I understand why he did that (it was a logical choice), but he went against his word. That puts his head and neck on the hangman game pad.

Jessica- It’s my opinion that Jess will do rather well in this game. Her failed campaign is actually a good thing, and now she has a better handle on who to trust moving forward.

Analyse- one of my favorites. She stuck to her original vote with Jess.

Kat- not a favorite at all, but she stuck to her word. I hope this Texas girl proves me wrong. But, my first impression is that she is too full of herself to actually play this game.

Jack- I’m worried now that his game could be at risk. I understand him siding with Jackson, but this team JJ thing could be his downfall. I hope he lands a good side alliance with Tommy (Did anyone else notice Tommy sitting on Jack’s lap when Julie gathered them in the living room?)

Tommy- I love this kid. His energy is infectious. I see him doing really well in this game, both socially and physically.

Cliff- I love that Cliff volunteered for director. It was hugely smart of him to acknowledge the middle-age mark that he is. Hang in there Cliff!

Ovi- he was smart to lay low and not reveal his leadership skills just yet. If he can develop an undercover alliance, he should do well. If he sides with Nick, they could lead a Derrick/Cody style game.

Nicole- This “#quirkyqueen” is adorable, but I’m not impressed that she was so easily swayed by Jackson.

Kemi- She’s gorgeous and completely self-aware. I LOVE that about her. Her DIana Ross hair is great but it is a bit distracting. I can’t wait to see how she does in this game.

Bella- I love her ruthless attitude. It’s funny, but is it real? SHe will be a lot of fun to watch.

Nick- He is a people watcher, for sure. I think he should work Chrisitie on this HOH to nominate Jackson. I mean, really? She’s thinking about eliminating a non-threat in Kat. Come on girl….don’t fall for that. Nick knows the better play. Let’s see how much of an influencer he is willing to be so early in this game.

Christie- She is growing on me. I wasn’t impressed at first, but she’s a straight shooter, like me. I think she will be able to handle the first HOH like a champ if Nick can push her (Tyler style) to nominate the easy target in Jackson.

Holly- She’s doing great so far. I really like her.

Sam- I’m not sure about this guy yet.

*Those paint blasters were mega powerful. They pushed off many HG’s goggles.

i disagree that making a big move early is the play. until sides are clearly formed, going after low hanging fruit makes sense. it’ll be interesting to see how jackson sold his decision to the rest of the house on tonight’s episode. looks like it worked? but he’s clearly a dangerous player the rest of the house should have on their radar. for now everyone seems to be wanting to work with jack, and he seems to be deferring all decisions to jackson. jackson will be in serious trouble if jack gets in a showmance so i think jackson may go after showmance options but he seems pigheaded enough to think he has a chance at a showmance himself and may want to keep some of the women around, at least the ones that voted him director. for the most part i think a lot of the women are in trouble, but it’s early so we’ll see what happens.

Oh, right! Of course she can’t nominate Jackson, being he is camp director and safe for the first eviction.

Christie can’t nominate Jackson as he has immunity for the first week, doesn’t he?

Yeppers. My memory bank is overdrawn these days. ;-/

Isn’t Jackson safe this week since he is director??

Welp, there’s three things that happen as you get older. First, your memory fades. I can’t remember the other two.

Granny, you are too dang funny! I’m gonna steal that one to tell my grandkids.

Isn’t Jackson safe this week? he can’t be nominated.

HAHAHA Dawg is in front!!! what a way to start the season :)

i voted dawg. too early in the season to tell how this will be.

It all starts tomorrow get your sleep.

Just remember that we expect flawlessly written and polished summaries. There can be no grammatical or spelling errors and we want them in a timely fashion! I’ve got a whole mess of jackboots and I’m ready to strap in.

The above is sarcasm. As long as you feed my need for information I’m good=)

HAHHA .. I did install Grammarly this year ;)

Haha – make sure it spells Kraken correctly so I know when to down one, or two, or the whole bottle!

Reminder to lock in your ranks. Feeds start tonight! Kemi sure took a drop after that first episode.

Is POP doing their nightly show?

Those eye rolls were a real turn off

I love how alliances or HOHs think they are going to win all the HOHs. It never happens

I literally Lol’d when Jackson said that……. they need a savvy Level 6 type situation if they wanna survive

Back 2 back wins happened in BBCAN1 but I can’t think of any other time and every season multiple people bring it up.

I just have to add that the standout quote from last night’s episode was Jackson saying, “I’m sorry! There’s only confetti for one person.”

That’s the thing that so many HGs (and fans) forget.

So far so good. There’s nobody I can’t stand yet. Lol…

I sure hope Cliff’s “Possum” tactic works. It’s sad that he is the only one in the house over 40. It sure would be nice if there were other more mature people in the house. Being the token sucks

Nick and Sam look like the same white dude, so they will probably finish #1 and #2. You saw it here first!

Pretty good cast so far though I find Kathryn a bit vapid and Tommy a little too extra; hoping he doesn’t go the Frankie Grande route

He is definitely this season’s Frankie but just a hairline more tolerable!

Nice! We just saw the most racist move in BB history. Banish all three people of color and the old man. Congratulations racist!

Happens every year. So predictable. Without even watching the episode I could guess that the black guy is always in danger followed closely by any other minority. People will squawk that it’s not true, but the stats are hard to argue with.

So obviously there will be a competition between the 1st few eliminated houseguests since Julie said “out of the house For Now” Jessica may be a thorn in Jackson’s side since she, next to David, was the most perturbed at being picked

These TV episodes are 15% fun 85% nail on a chalkboard

If it weren’t for the DR sessions I probably wouldn’t watch the tv episodes. Some contestants are actually funny while others you have to laugh at for the “extra cheese”. I still think I got the most enjoyment out of the Rockstar Dentist’s DR sessions

I have a feeling I am going to be rooting for Tommy, but it’s definitely to early to decide just yet.

Sam’s voice keep making me think of Charlie on It’s always sunny when it gets high pitched. It’s probably make me laugh a little more from him.

Sam totally gets on my nerves.