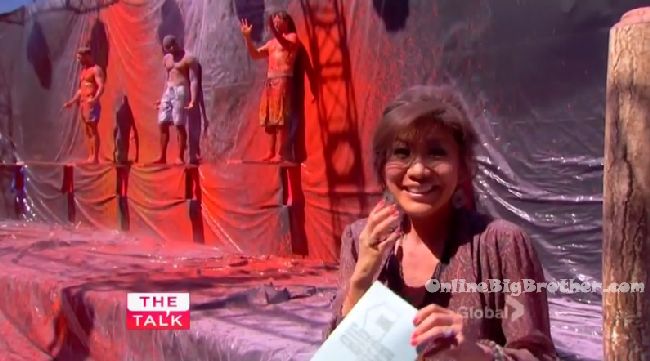 With the season première of Big Brother 17 just hours away Julie Chen has released a new video from inside the BB house. The video shows them testing out the new equipment they’re going to use for tonight’s first Head of Household competition. To help her out with the testing she got 3 of CBS’s day time heart throbs. James O’Halloran from the “Price is Right”, Lawrence Saint-Victor & Darin Brooks from “The Bold and the Beautiful”. Julie informs them that the game is simple, all you have to do is catch the flying tomatoes. Lawrence takes one in the crotch and falls to the ground. Julie tells them she thinks they’ll need to change the name to the bold and the injured. Julie then says they need to decide what type of gunk they’re going to throw at the house guests tonight. The 3 guinea pigs then get hit with three different type of “gunk”. After Julie says she thinks they’ll have to go with the tomato sauce.

Click here to ensure your live feed subscription supports OnlineBigBrother.com at no extra cost to you.

there a ful episode out there already

Anyone know of a live stream for tonights show?

I’ll post them once I have a few reliable ones.

Hey Greg, I’ll post them on the comments of the most recent post. I get home in a hour will try and get them up early but want to test them all out to make sure they are legit.

If you bought the live feeds you can watch CBS live online through All-Access. Just install an extension like Location Guard and spoof your location to NYC.

Ahh so you have to be in NYC to get the live streaming of the episodes?

No, if you bought the all access, just look at the list it provides for live tv. I use location guard and set mine to Denver as it’s the closet to me. Where I am it is not available, but with location guard I set to Denver I have it running :)

It works from a handful of cities where the CBS affiliate is actually owned by CBS, one of which is NYC. The trick is to spoof your browser into reporting your location as one of those cities. “Location Guard” is an extension for Chrome that does just that. You can also try Philly, Miami, Chicago, Dallas, or try to find the full list. There are some West Coast cities included, but then you have to wait for the west coast premiere. I live in CA and am currently watching the Dallas feed awaiting the premiere. :)

Let’s get this season started. I’m really looking forward to a new season and hopefully we get some good twists.

Hey Simon or Dawg,
Is this year the same as usual – I buy live feeds through your site and you get a cut?
Let me know so I can get er done.
Cheers to another Big Brother season and sharing out thoughts with each other on this amazing site!!

We do! every feed sale gives us a cut helps keep this place running

yes u watch it csnada to!

This is the best stream I can find

nvm you already have it lol

one more without the ads like the ustream stream has

Here we go! We’re about to find out what this season has in store for us.

Ugh. Meg is getting on my nerves already

Battle of the Block fan favorite twist? Ya no, its what ruined last season by consolidating the power in one alliance the whole season. UGh

Battle of the block is back????…*pukes*…another predictable slaughter of the girls coming again…I thought big brother said they were coming up something new….this is not new….hate it already. .

I should have expected that the Drew/Ben twist would make a comeback. The way she explained it, it sounds like the exact same concept that they did back then