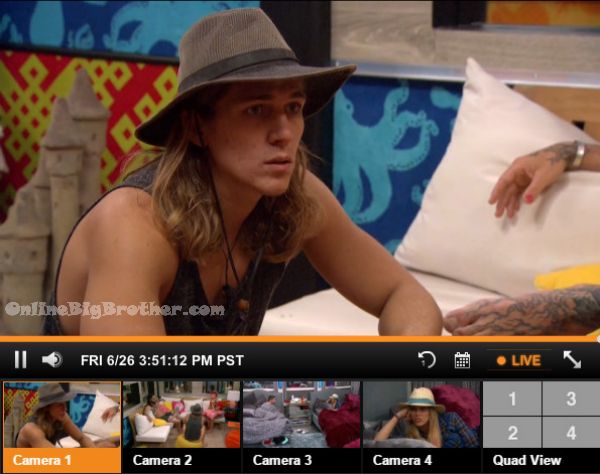 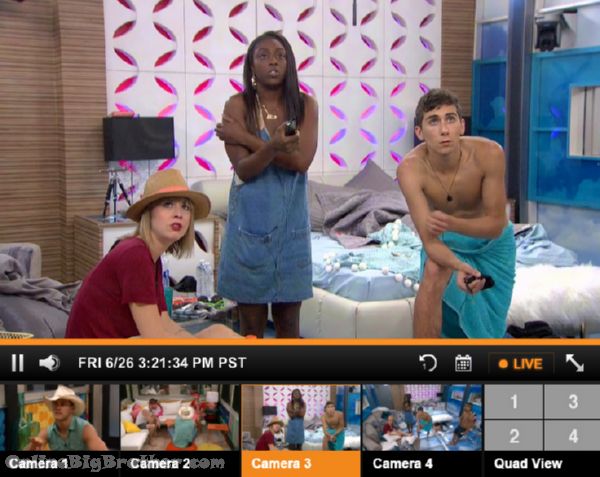 3:11pm HOH Jason, Davonne, Meg, James
James tells them Jace is going up, Points out that AUstin was talking about targeting Jeff next week.
Jason wants them to let those two fight it out so they can stay in the middle.
Davonne is certain if Austin wins HOH he’s putting Jeff up.
Megg tells them Austin is “Emotional about it”
Audrey joins them. 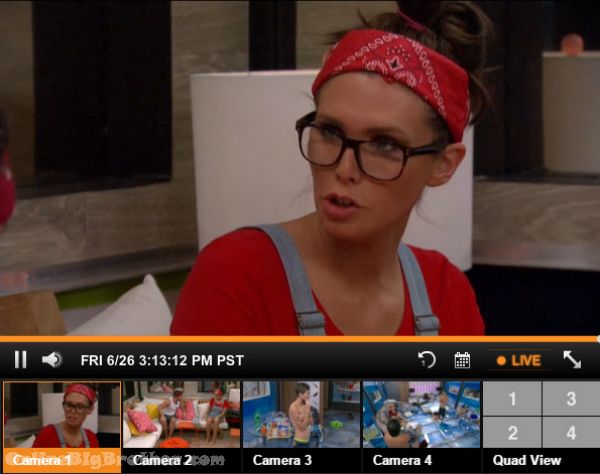 3:11pm Cabana Audrey and Jeff
Audrey is confronting him about why he thinks she’s acting sketchy. Asks him what has she done.
Jeff tells her not to worry it’s not him. adds that him and Clay are onboard to bring her in with them.
Jeff goes to get Clay so they can confirm who’s saying Audrey is sketchy. Clay first heard it from Jace and Austin. 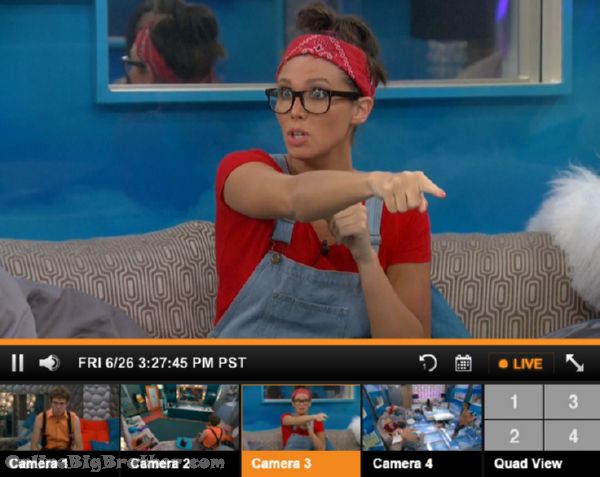 3:24pm HOH Audrey, Davonne, James, Jason
Audrey says it’s going around the house that Jason is telling people she’s not trustworthy. Jason denies it.
Audrey telling them how Jace, LIz and Austin are telling people Jason is spreading she’s Sketchy.
Davonne asks her who is talking about it “Clay.. Shelli to?”
Audrey – It’s not them.. there’s another really nice person in this house that everyone forgets about that’s been around.
They guess Steve
James – I don’t trust Steve man
After some conversation they start agreeing that JAce may be the root of all this.
James warns them that Austin and Jace are going to spread a lot lies around the house once they find out Jace is going up. 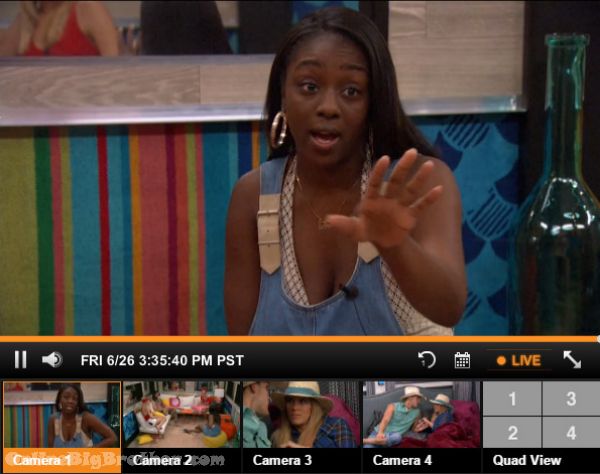 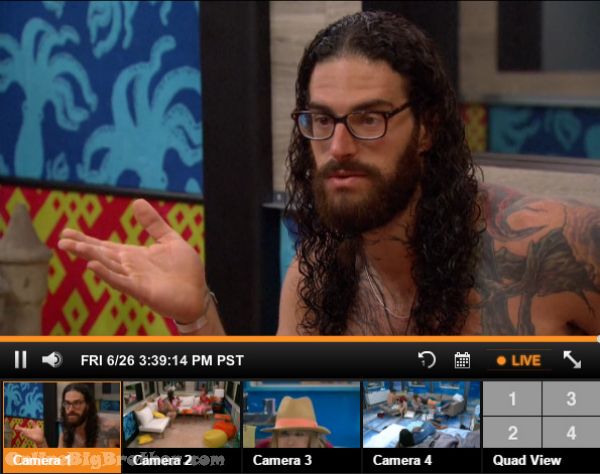 3:37pm Austin And Audrey Cabana
Telling her he’s loyal to their final 3
Austin doesn’t want to get rid of Jace this week he wants to get rid of Jeff. Adds he’s jealous of them and he wants Liz.
Austin tells her Jace doesn’t know anything about them. 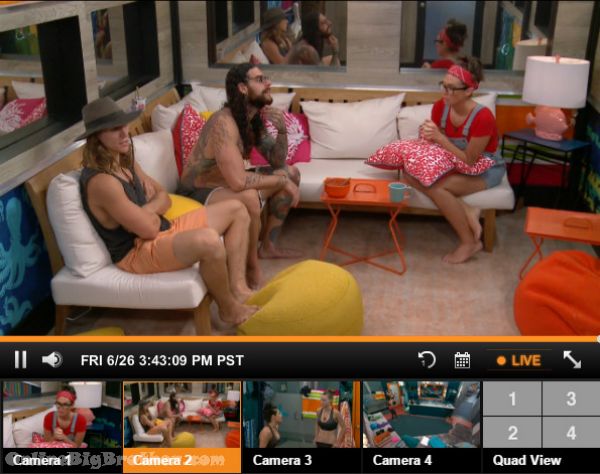 She’s confronting him for telling people she’s sketchy says there’s been conversations about backdooring her.
Audrey – Why Are you feeling i’m trying to backdoor you”
Jace – I never said that that
Audrey – Why would you suspect me
Jace – why am I the main suspect I don’t understand why am I at the centre of this

Jace is stressing he’s never told anyone to backdoor Audrey. Mentions everything he’s said in confidence has been spread around the house.
Austin says he thought they had a four person alliance (Jace, Audrey, Austin and Liz)

Jace – I never said anything about going after you.. This whole thing stems from me trying to see if this alliance is legitimate

Audrey – I wish you would come to talk to me.. not there’s all this spilled milk all this drama.
Audrey says it all started with Day (davonne)
Jace brings up multiple people in the house are saying that Audrey is in their ear and that concerns him.

They asks him who is saying that.
Austin thinks it’s Jeff. 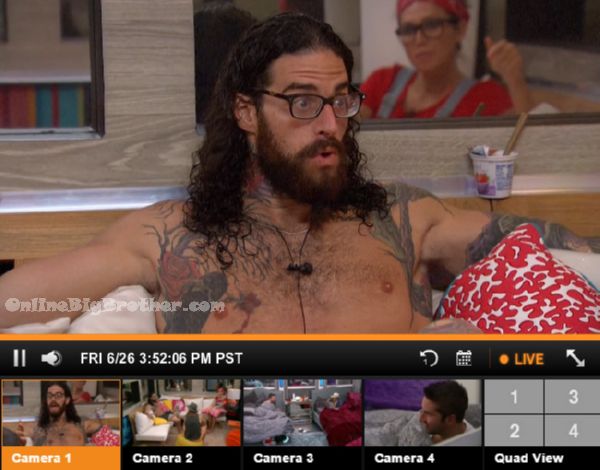 Audrey will not be there long. She is involved in too much drama already. I hope she is gone soon

Haven’t seen the feeds yet but wow there seems to be a lot of action so far. And I agree Audrey sounds like she is coming out hitting way too hard.

But I can’t criticize her totally. Sometimes the bully tactics work if you play them right.

The recarnination of Ian Terry won the Veto!!!

Is Liz The new ashley lol

Audrey girl you’re creating your own drama!! Hope we still see Jace as replacement, I’m happy with him first out the door.

as soon as i saw her interview with Jeff, i have been saying she will bring the drama

I already love this season!!

Geez – I’m confused too Dawg! Just sooo happy that Steve won POV!! Dawg, do you know why Audrey & so many of the house guests want him gone? Do they not like him or are they just threatened by him?

If I was in the house, I would want Steve out too to be honest …I mean typecast Ian Terry superfan….he knows too much…he is one of those if he lasts too long…he’ll be overlooked…. I think it’s a smart move….

This is a controversial comment so I can understand if people downvote me: I don’t think Ian Terry was a good player at all and I think the houseguests realize that type of player is not a threat.

In my opinion Ian had some lucky things happen that kept him in the game, not to mention a bitter jury.

Liz, Austin and Jace (although Davonne and Liz are close???) are off on their own in their own little group….I have no idea where Jeff and Jackie is doing…

Here’s my assumption on what transpired when the feeds are down. Audrey made an alliance with Shelli and Davone (as we’ve seen on the show) on day 1. Then made an alliance with James, Clay and Meg. Jason being the other HOH became a part of that group (with Davone as a tag along) somewhere between day 2-6. Austin and Jace then tried to create an alliance with Audrey who ratted them out to James (because duh, he’s the HOH) and the HOH group deduced that Jace and Austin are forming alliances with everyone in the house. Jace trying to pull in James on the 7th day only confirmed what Audrey told him.

So…Audrey basically created this huge ass alliances just like Devin last year and they are already starting turn on her for being paranoid and making too many alliances…oh you…this looks awfully familiar…I really hope that this not follow the season 16 playbook and if Audrey does go early…we don’t see Steve, Austin, Liz, Vanessa, John, Becky, Jeff and Jackie just picked off one by one….and I’m feeling this order too for some reason…

well said Carlos, now it make sense 1000%, so james will prolly back door Austin or Jace come Thursday. i doubt anything will change until nom monday night!!!!!!

I have nightmares of last season coming back…

Thanks Carlos – that cleared it up a lot for me – don’t feel quite so lost now!

Audrey needs to dial it down right now or she’s next on the block. Hopefully these couple of weeks will not be a repeat of Devin’s shenanigans.
Also,have they started the switch between Liz and her twin yet? From the pictures the eyes look different.

Don’t you dare start a fight with me this season or I’m gonna rip your fake boobies off!

Paranoia is so high just because a nominee won the veto! Hahaha! This is feeds gold already! And today is day two of feeds! If the season continues to be this way this will definitely go down as one of the best season of BB. And Audrey is a real gameplayer, she may be marketed as the transgendered character but she is definitely way more than that. Her gameplay really reminds me so much of Amanda.

Audrey is so paranoid XD. Day wants her head now.

Am so happy steve won POV! Yay, he’s by far my fav

Thought Audrey was a gamer during her interviews but she is ruining her chances right now. The Amanda comparisons seem to be accurate. She also seems to have a little Devin in her as well.
She’s making the early stages of the game entertaining as hell though, that’s for sure.

And a little bit of Devin is a powerful force!

WTH. I leave to go dinner and I come back to a partial group meeting where supposedly people are making amends for something I did not see happen and Jason thinking he is going home. What the hell did I miss?

Dear Audrey
the day the POV is won by a nominee, and before the POV replacement is named is not the time to run around confronting everyone in an aggressive way.

it is early days, and enough people wonder who she’s going to talk to and tell something she knows, especially since she is in everyone’s ear, the more likely james is going to, as he says, go with the house majority. it can easily switch from jace to audrey,

And when it comes to the crunch people seem to keep ‘annoying’ and get out ‘dangerous’!

I thought Audrey was going to be more clam than this, but she’s becoming a hot mess fast. Is she really confronting almost the whole house about calling her sketchy? Then she’s keeps throwing another person under the bus while she does it. First it’s Jason, then Jace, and now Da’Vonne? Get your story straight lol. She’s Brian, Ronnie, Amanda, and Devin wrapped in one explosive package. The feeds are gold.

Some people have already said it, but the target could very easily switch from Jace to Audrey. Da and James are already on to her, and the whole house can’t be to far behind considering her aggressive actions.

Da’Vonne and Jason shit-talking Audrey every time they can gets tiring, like gurl talk smack about Jace/Liz not her when she is loyal to you.

This picture of Audrey when she was much younger still looks like she is a she.
Check it out and tell me what you think.
http://www.astrowikia.com/2015/06/divination-wiki-audrey-middleton.html

Jace: why am I at the center of this?
Because that’s where douchebags belong.

This is why the first few weeks are the worst!

Props to Simon and Dawg for sitting through and watching all this confusing stuff with so many house guests!

I agree that was really tough to read with all the chinese whispers going on and different names as I haven’t watched the feeds yet. But the detail is awesome and really appreciated.

hell yes for steve! I want that kid to go far, maybe not win, but at least be able to spend a little more time in the house playing a game he loves. It would have been sad if he went home week 1 after talking about how it had been his dream since he was in elementary school to be on Big Brother

Thanks Simon and Dawg! been coming to this site for years but never posted. Keep up the great work!

Totally agree with you – would hate to see Steve go out already! Hope he can form an alliance soon. Glad you posted – keep on commenting!