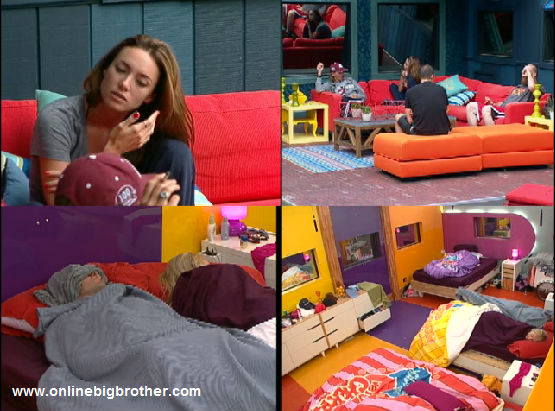 8:50am – 9:30am Shelly wakes up, makes coffee, changes her batteries, and goes to sit out in the backyard on the couch. At 9am Big Brother tells the houseguests that its time to get up for the day.When the live feeds come back, Cassi is out in the backyard talking to Shelly telling her all about how Porsche came up to her to talk early in the morning. Adam and Brendon are now outside sitting on the couches talking about how Brendon got called into the diary room twice last night. Shelly says that absolutely nothing stays inside that kid (Porsche). Shelly says that Porsche told her that if she heard her name mentioned she would come tell her… Shelly says to Cassi why would you put that in my head ..if its not something negative …like someone likes you or you wore purple today… why would you mention it. Cassi says that their conversation kept going around in circles and just wanted to stop talking about it. The conversation changes to talking about Brendons short hair and how he used to have it longer.

TRY the out the Live Feeds for FREE SUPERPASS – 3 DAY Trial!
9:30am Shelly and Brendon are on the couch alone talking. Brendon asks what happened with Cassi and Porsche. Shelly says yeah the got into it last night ..they really don’t get along. Brendon tells Shelly about how he and Rachel had a fight last night about how she acted. Brendon talks about how Rachel was in the hammock with Porsche, Dominic and Lawon and they were yell the pet names Rachel uses and laughing. Brendon says that made it a joke and thats not funny to me ..they don’t know us or our relationship. Shelly agrees and says you’re totally right. Brendon talks about how he really didnt want to come back on reality tv but that he did if for Rachel and this is how she acts. Brendon loves Rachel but thinks she is upsetting some times and needs to keep things about them private. Brendon says that Rachel is generally good but she needs to grow up some more. Brendon gets called into the diary room again.

10am Adam comes back outside to sit on the couch. Adam asks so is it a fore gone conclusion that we are getting rid of Porsche this thursday? Shelly says …I still don’t know anything solid yet. Adam says that he thinks people in the house will have a problem if it changes to voting out Keith. Adam says that the only reason he is still talking to Porsche because if she stays he wants her vote on his side. Shelly says that the more Porsche isolates herself from us newbies the more she shows her true colors. Shelly tells Adam that he knows how to keep his mouth shut and that’s important. Adam says that Keith is a strong kid but he’s not a good competitor. Shelly says right. Adam goes and gets on the elliptical. Brendon comes back out and talks to Shelly on the couch. Shelly tells him that its sucks that he has to worry about what his partner is doing all the time. Brendon and Shelly start talking about Brendons season and the competitions. Brendon says that Britney wasn’t a strong competitor and that he is still extremely upset with Matt’s game play. 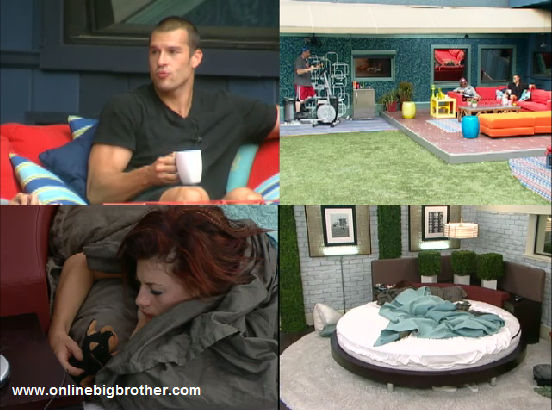 10:10am Brendon, Adam, and Shelly are outside talking about random things while Adam works out. Brendon says that he was amazed at home many people from Canada watched the show and were fans of theirs.. he starts listing off names and Big Brother cuts the live feeds.

my god,was porsche that bad last night ?? i dont think so…….

cassi is hot ..dont matter if shes wearing a hot bikini,those stupid sweat pants with a 5 $ t-shirt,or that dopey grey hat…she is smoking hot YO !!

It’s hilarious how jealous porche is of Cassi. she came in the house thinking she would be the hottest girl….now her and rachel are all insecure “do you think Cassi got a nose job?”

I had to go do a little research as to whether their questioning of go under the knife was warranted. Although I don’t have enough evidence that supports any work done on the face I’ve been almost assured that her chest is most likely fake like almost every girl.
Dany Porsche’s arse isn’t that big (Monet and Jameka) and Cassi isn’t that hot….

hum you do realise that porsche is a white girl,and the other 2 are african americans….right ?? as far as cassi goes…..yo ….shes angelina jolie…20 years younger !!

Good point. Besides that google Cassi Colvin.. she’s not THAT hot she’s good looking for sure a definite 8 but I guess it’s a matter of taste.
Also she reminds me of Mila Kunis.

Umm I’m from Canada and all my friends and family who watch DESPISE Brendon and Rachel so I doubt they have that many Canadian fans were all about J&J over here <3 they do no wrong in my eyes but I'm completely bias when it comes to those two so….

I don’t think Rachel or Porsche were behaving badly. It’s just when people are tired & not drinking then those that are drinking look even sillier. When Brendon is tipsy and they are both acting goofy it’s ok. These people are just lame and afraid of how they’ll be portrayed on TV. I think Rachel & Porsche were just having fun & being silly. They are 20 somethings…what’s wrong with that. Also, Brendon — If you are so worried about keeping things private about your relationship then why were you telling the other HGs about you & Rachel’s fight. That seems more private then Rachel calling you bookie or whatever. I really like Rachel & I’m seeing that the reason I didn’t like her last season was because of her gross relationship with Brendon, not her playing the BB game.

HAHAHAHA! Now the NeanderTAAL is saying he had everyone pegged right from the beginning last season and he should have just trusted his gut. He is claiming that on day two he knew Hayden and Lane were together and had a bond to take each other to the end.

Oh my god his revisionist history is absolutly driving me insane!! I guess he doesn’t remember the “Athletics” the lame ass alliance he thought he had with Enzo and Hayden last year. Brendon didnt have a clue last year and this year is even worse with his huge ego getting in the way of any intelligent thought.

you are a hater! seriously. so because a HG made a mistake, they lasted till almost the end of the darn game? cmon. they deserve a LOT of credit for HOH and POV wins when that stupid brigade wanted to win, time and time again. Worst social game maybe in the history of BB, but they are quite the team at challenges, whether its luck, or “other houseguests making mistakes” they still get it done

of course they will never win the game of BB

First, they did not make it almost to the end. Rachel ended up 9th, being beaten by Kathy and Brendon ended up 6th. Secondly, of the HOH competitions that Rachel won, the first was trivia and the second she won on a guess a number tie breaker. I don’t get that she is a fierce competitor. They whine constantly about how everyone is/was out to get them, but seriously! They hooked up in a showmance before the feeds even started and put a huge bullseye on themselves from the start. When they were winning they were out of control drunk on power and when they were losing they moped and threw tantrums. Instead of weeding out the strong players, they sent weak girls home because Rachel is threatened by any girl that is nicer looking and classier than she is, which last season was everyone except Kathy. Sorry, but they are not worthy of a second chance because they played a very bad game last year.

everyone knew that there was a friendship there with lane and hayden….are you serious?

Actually I’m quite serious, and you seem to be agreeing with my point even though you didn’t understand it. I never said Lane and Hayden weren’t obviously friends I said Brendumb is revising history to say he had everyone pegged right from the beginning last year which couldn’t be further from the truth, he got duped by every person in that house and then complained about how terrible they were for going back on their word not realizing they were just telling him what he wanted to hear.

I’m glad somebody caught him saying that as well….In addition, if Brenden KNEW, why did they vote out Kristen instead of Hayden???? Brendon had no clue that the Brigade existed, and that they all had fake side alliances with other members of the house. At one time, he was putting a lot of his trust into Enzo.

Rachel and Brendon learned NOTHING from their first experience in the BB House. If they did, they would understand why people would target them. I am so sick of Rachel asking the question why would they put us up??? Her theory that because she did not put up people during the first week, that they cannot put up her and Brendon and Jeff and Jordan if their side does not win HOH next week. This just shows how twisted and self serving she is, because that would mean that NO ONE could be put up, for the only person that would leave would be either Keith or Porsche, and that remaining houseguest would have the Golden Key.

Cassi reminds me a lot of Olivia Wild from the tv show House http://www.imdb.com/name/nm1312575/

Yea, the eyes are so close

been thinking that from the second she walked in the house. I basically call her olivia wilde…although somehow porsche is still better looking.

“NO ONE in Canada likes you. Don’t come here!” LMBO @LNM

missed first week, on vacation, but i’m back