12:40 – 1pm Jeff and Jordan hang out in the bathroom in silence while the other are in the kitchen eating and talking about random stuff. Jordan gets up and they head into the storage room to find something to make for lunch. Most of the houseguests are in the kitchen eating and talking. Adam says that he wants the POV to happen already. Brendon tells Adam that they usually pick the power of veto players a couple hours before it happens.

If you’re on a mobile device don’t forget that the Big Brother 13 live feeds are accessible this year on your Android and iOS devices. Sign up 3 free day trial 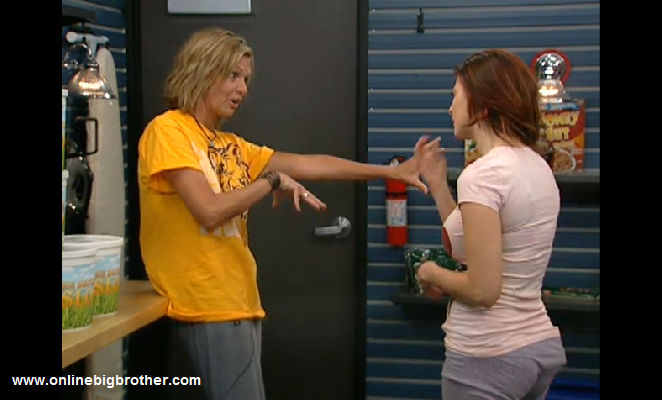 1:35pm Shelly, Rachel, Dani, Lawon, Kalia and Adam are sitting around the kitchen table talking about random stuff. Rachel and Dani are painting large boxes into dice. They’re talking about 90210 and then Dani starts talking about how much she loves the TV show Top Chef. 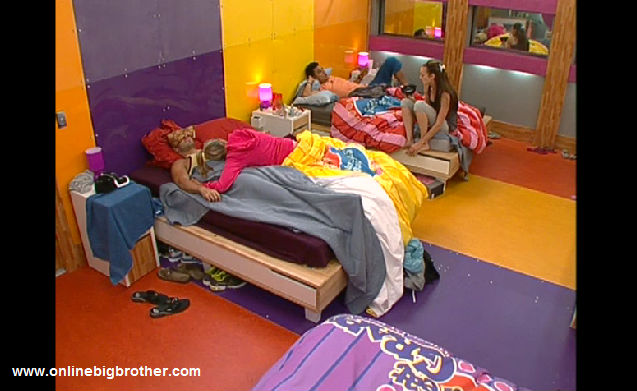 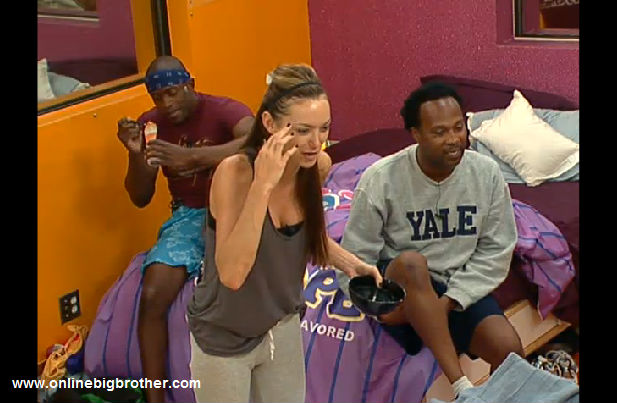 2pm Porsche comes in and Dominic asks her if she was HOH and she got to pick the host for the competition who would she pick? Porsche says she would let Lawon do it. Jeff jokes and says you BLANKing sell out! Adam comes in and they ask him who he would choose as host. Adam says he would chose Lawon. They all laugh. Dominics annoyed that no one would pick him. Jeff then gets Lawon to practice and say how he would host saying “Houseguests MOOOOOOooove into the backyard for our first veto competition. Lawon keeps trying. Then Dominic steps up and gives it a go and everyone tells him that he nails it on the first try. They coach Lawon on how to do it right. Lawon tries again and gets it. They talk about how they are having a hosting battle. Jeff tell Lawon to make up lines and for Dominic to battle his version after.

TRY the Live Feeds for FREE for 3 days! SUPERPASS! 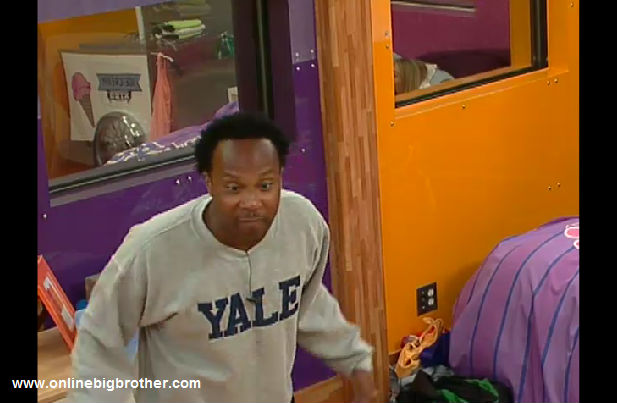 Hey Allison Grodner, good job casting this year. One breached their contract before you could cheat to help him win, and another is threatening to quit week one. Is BB a few seasons away from getting the plug pulled? I look forward to the day you’re fired. Take a look at the “All Stars” from many years ago compared to the “All Stars” nowadays and you’ll see what I mean. Jordan wins the game because she won one competition at the very end while being carried, Dick wins because production cheats, and Hayden wins because he didn’t do anything. Floating is the new ideal strategy in the show, and that’s sad.

Agreed they should let them fight to the death….for that half a million, same goes for survivor, these shows offer far too much money for little to nothing.

at first i liked the key thing and now i don’t .big brother needs to come up with better twist or peope who want to compete

See QAZ, I found you through email! Anyway, I think some of these older reality shows are wearing thin. Maybe some are getting pass their time. I hope not because what would I do without you guys to make my summer fun!

You are absolutely correct about the floaters!! It is sad that we have to watch BB to see who will float to win rather than use strategy!!

QAZ, now it is telling me I am posting too fast. I think I have screwed things up. But I can’t find you. And, I apologize to everyone else if I am bothering you. I just am trying to get this to work. Sorry!

QAZ, it didn’t take the first comment where I was telling you that it keeps taking me back to the same page and you are not on there. I was trying to see if you could find me. Did you and Rockstar get things figured out on here. I am still lost. Sorry again to everyone else.

BBGrandma – I’ve been having the same problems as you’ve described. I’ve been holding off on commenting until things are sorted out.

I have faith Simon and Dawg will figure this out soon.

I’m trying, Lennon’s Ghost. See, I got here from an email notification. It takes you right to the comment. But, hell, if you sign for that you get a hundred emails! I just miss you guys so much that I just got to type!

BBGrandma, I went through the multiple email deal last night and this morning. Ugh. I’m feeling like Norman as well. I believe in the KISS principle (Keep It Simple Stupid), although Simon & Dawg are doing a great job as usual. They’ll straighten this out. If this works, perhaps they have already.

Talk at you a little later.

Please send me a email about what is going on simon.onlinebigbrother@gmail.com I may have to disable the email function.. i’m having trouble right now keeping track of all the comments.

Simon, the email works fine. Lennon and I were just commenting that you get a million of them on certain ones because there are so many comments made in that section. The problem I am having is that when you click on the Recent comment section it takes you to a section top and when you schroll down that person wasn’t even on that section. I know you will fix it when you get to it.

ohh ok thanks.. if you anyone sends be a message and notice I’m not reply i’m sorry some of these comments are slipping by me.

Replies are now getting to the same page, although I still have to scroll up to find what I am replying to. It’s getting better. Thanks.

Sorry about all this. It’s still early in the season and I know that you are busy with so much more than in past seasons.

This is, and always will be the ONLY Big Brother site I will visit. You and Dawg are the best! YO Grenades!

thanks lennon.. I miss the grenades damn that was good fun :(

Yes, Simon, it is much better!!

kathie from canada
Reply to  BBGrandma

No worries BBGrandma – we old fogies do the best we can:) Nice to read your posts again. Hope all is well with you and yours.

BBGrandma
Reply to  kathie from canada

Hey there, Katie from Canada! So glad to see you here! We are going to have fun no matter the house guests. Damn, getting lost on the site is getting me worried. I mean, I am getting old. It is making me think I am out picking strawberries and can’t from the road home. (Like Norm in Golden Pond) I’ve become an old Poob!

so Dani has a goldern key, why i wanted to see her compete

Maybe BB was trying to take a page from Survivor, like the Micronesia season Fans vs. Faves? Problem is that while Survivor and BB are alike in many ways, they are also very different. Problem is that BB is limited in area, so they don’t really have a way to make the newbies play against the vets. Personally, I would also find this season more interesting if they came up with new competitions. Since they keep recycling past comps, anyone who even watches the show has an idea of what to expect and they don’t shake it up much either when it comes to the rotation of endurance vs. intelligence challenges. I think if they want to survive another season, they need to find a way to really shake things up. Cast people who have never watched the show and stop looking for the standard checklist cast (at least one gay guy, one hot babe, one hot guy, one prima donna/ditz, one loudmouth jerk, one older person, round out the rest with relatively normal/average single people and hope for the best). I guess it says something about us that as much as we’re already knocking BB13, we will be tuning in all summer, watching, waiting, analyzing, commenting, and speculating.

So true, FVRPLAID. We do keep watching. But, this site has always been more fun than the show for me at times.

let rachel quit!!!!!!! i hate her she’s so annoying with her laugh and she thinks she all that even thoguh she ain’t. i can’t stand her at all

Take out rachels boyfriend with out him she’s nothing