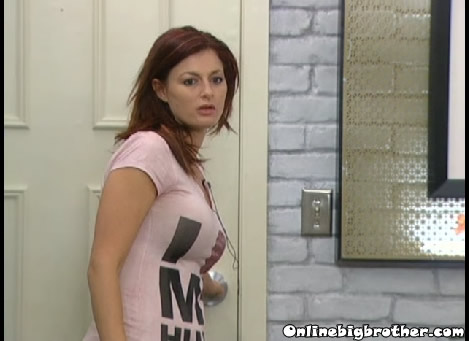 2:00pm HOH Dani, Rachel and Brendon
Major game talking – Dani wants them to get Kalia and Lawon on their side Rachel agrees Brendon isn’t sure about lawon. Rachel doesn’t trust Keith she mentions the conversation Dani had with him earlier in the day, Dano says nothing important was talked about it was mostly Keith giving her some support for loosing her “duo” in the house. Rachel warns them that Keith is playing up the smooth talker attitude but it’s a complete act. Dani notices it to and thinks it’s a stupid tactic. Rachel gets called into the DR, on her way out Dano jokes “you have something going on in the DR” Brendon: “why do they need you again” Rachel:”I have a secret alliance”. Right before she leaves she says she thinks that Jeff and Jordan are probably not going to play the POV just because “this is Big Brother and that’s what happens” She warns them that they have to start thinking about who to pick to play. Their thinking about Shelly because they want to have her in their pocket. Dani “well what if you get to pick rachel who will you pick to play POV” rachel: “Umm duh Jeff and Jordan hahahahahahahahahahahhahahaha” Dani: “ohh duh that was stupid” Rachel: “hahahahahahahahahaha”. rachel leaves. 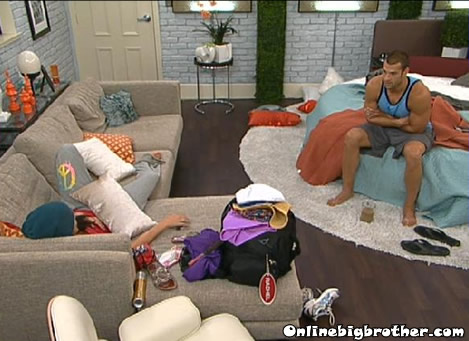 Brendon ask Dani if they told her she can’t play POV. Dani says she can’t do shit when she’s sitting on the golden key she feels like all the air has been sucked out of her, “I’m a balloon with all the air let out”.

Dani is sure that DOM is younger then he says he is and that he doesn’t deserve the money he’s too young. Dani about Dom “you can totally take me to the prom if you win big brother”. Dani thinks DOM is smarter than he makes it sounds. Brendon enthusiastically agrees. Dani: “ohh wait wait don’t give him too much credit” Jordan is super close to kalia we need her to get super close with Keith. They both agree that the best way to get lawon is to make him think he needs them in order to get farther in the game.

Dani “these people are playing stupid they are playing emotionally not logical.. there thinking week one we’ve jumped to week three cmon get on the ball here” (dani thinks she’s the BB master mind lol)
Brendon “ye
Brendon: “We need to send Dom home soon”
Dani: ‘ya”
Brendon: “If we can get Dome and Keith out that removes their smartest and most physical competitor… we have Me and Jeff”
Dani: “yeah…. ”
Dani brings up if they can win the next 2 HOH comps then they will have this game in the bag…. Feeds cut Veto picking 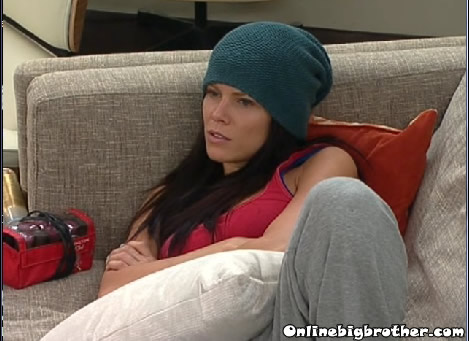 2:34pm Bedroom Porsche, jordan, Brendon, Shelly, Dani, rachel, Jeff Porsche: “I hope that there is alcohol in this competitions i’m not going to be Lydia but i’ll make some rude comments”.. Dani “wait you can get hammered in a competitions?”. Jordan:” yeah remember Lydia in my season” They starts talking about having drinks in the comps. Jordan explains to them when lydia got drunk on her season… and flipped the table over and how she was acting crazy.
Adam joins them and we learn that he is the host of the POV comp. Jordan jokes that he’s going to be like the announcer for UFC, Dom: ‘Lets get ready to… COPYRIGHT” 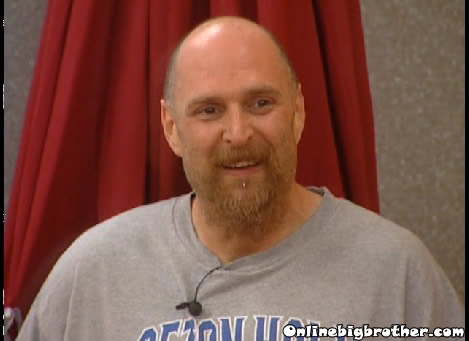 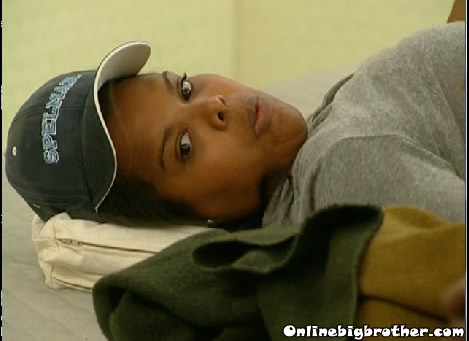 2:35pm Have nots Keith and Kalia Keith is worried that he doesn’t have the numbers to stay

Keith I got your vote? Kalia Yes of course but you have to remember people in this house have conversation all the time you should not get too worried about people talking. Kalia continues to reassure him that she thinks he’s safe and she thinks they (newbs) are all on the same page she has not reason to think other wise. She adds that Lawon and her arr close they talk all the time. Kieth: “I believe you I know DOm is still down, Cassi is down.. Shelly is down and you” Kalia: ‘Yes nothing changes I think what happened is benefit us.. we just need to chill and stick with our plan” Kalia reminds him that so much of the game is social and she doesn’t feel like she has the personalty traits that are needed in this type of game.

Keith brings up that he’s attracted to Casssi, Kalaia asks if he’s ex girlfriend was white.. Keith says she was. Kalai: “you normal do white girls” Keith stutters but says most of the girls that come on to him. 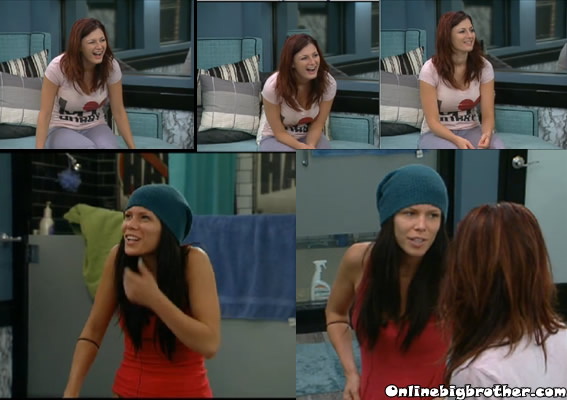 2:55pm Bathroom Dani and rachel Rachel: “Did you see his face… Keiths face.. when we pick Jeff and Jordan to play in the POV?” Dani: “Ohh yeah i’m sure they(Newbs) all think it’s rigged.. whatever I don’t care” Dani starts to impersonate Rachel when she was picking for POV.. Rachel is having a blast watching (these 2 sure are BFFs now… ) dani starts whining about having the golden key and not being bale to play in competitions win any prizes “this like seriously blows” PRODUCTION “Rachel please put on your microphone” rachel: “I am” Dani: “Her big Titties are hiding it” They start to go over the time frame of the game and how many HOH’s Dani has to site out in. Dani mentions how all her friends that have played the game in the past are all probably watching the show right ow saying how seriously screwed she is because Dick is gone. (Dani is really pushing the disadvantage player angle with Rachel I wonder if Rachel will clue in on this) Dani is predicting that Jordan will win HOH this coming week then all they need is one of them to win the next and they’ll have the numbers. Dani: “They think we’re stupid … we’ve played this game before we know what to do” Lawon some out of the shiter and talk changes to coffee.

Dani is playing rachel, i love it

I agree! I think Dani is a much smarter player than she leads on!

ED is gone? Dang – I was SO looking forward to seeing him make Brenden cry! I don’t know all the details, but sounds like ED was an initial ratings booster. I thought he gave in too easy on the first HOH challenge. It was never like Dani to give in like that either. Hmmm….???

i really hope the vets start to fracture. cause all this “yay we rock cause we are so smart” shit and the “oh no dick’s gone we’re so disadvantaged” is reallly wearing on me already…and its only been a day. some serious ego going on in this house.

yes i agree the vets need to break up soon

This Guy
Reply to  juju

I agree but I also hope that the newbies break up too. I was worried that it was gonna be a “newbies vs vets” mentality in the house and that’s what it appears is happening. I would be more interested if they were to mix.

juju
Reply to  This Guy

yeah definitely looks like a newbies versus vets things. but the newbies are already splitting up…hopefully the vets join that party soon. perhaps if a new hg wins the next hoh will see the veterans scramble a bit and change alliances.

I’m with you there, JuJu!

I agree. How anyone can be in an alliance with Brenchel is beyond me.

Man! I was really hoping for some Brenchel vs. JJ drama. Doesn’t look like their twists this season are paying off yet.

Yea me too, but I think they already talked about that tantrum incident last season at the bb after party or some other time..

Rachel is not that dumb, brendon will see through Dani …Dani lookin like a Hobo right now

Brendon can’t see through plastic wrap. He is the ultimate floater!

yeah i’m not digging the mystery6 right now.. CBS needs to throw in a monkey wrench and split them up maybe with jeff /jordan on one side and rachel/brendon on another. Now that would be fun.

agreed! come on big brother producers…you rig the game normally…rig it so j/j b/r and dani start fighting or have to throw each other under the bus…or something!

What happened to ED?

the SOB tried to pull a fast one on production and put a video out letting the world know he was in the house, the video was made live on Thursday

Nice to see everyone coming back to enjoy another season of Big Brother :)

As much as we complain that we will stop watching because of ‘x’, we will all watch to the finale =)

I drove by a lady of the night once singing that same song.

So freaking pizzed that ED is no longer on. So freakin’ pizzed. Dude’s got REAL game and IS real. FOOK that contract sheet. (Yeah, I get it–they can’t–I DO get it). But it sucks.

I literally cheered when ED walked in that door last night. He could be brutal and I hated him on his season, but his move that saved both he and Danielle when they were both on the block was one of the best moves in BB history. Probably one of the first with a strategy to be mean to the houseguests (walking with pots and pans, taunting, humiliating, etc.) in order to get someone (Danielle) further in the game…yet he wound up winning the whole thing. Remember the final HOH when they had to jump the bunny in the rain and he taunted the s**t out of Zach relentlessly for hours? I felt bad for Zach after a while. Props to him for still winning that challenge. Still, even if you hated ED, he was entertaining. That was a great season. IMO, last season was one of the worst.

Dani the major BIOTCH is playing Rachel like a fiddle!! Hate Dani but love to see this!!

I can’t stand Dani either but she is probably playing one of the stronger games.. Brendon is acting like he wrote the rule book on BB its hilarious

Dani is a very strong competitor and she will make the game interesting. She surpassed Janelle in winning challenges….although obviously she’s not half as likeable as Janelle. I liked Keisha, too – her and Renny were fun to watch. Brenden is just a big whiny baby. Weak men = big turnoff! It’s harder to get into the show the first couple weeks (for me) because you don’t get completely attached to certain players until a few weeks in when you see their game play and personality. Case in point, I loved Brenden the first week or two…until I realized he was a big whiny needy pathetic “B”. I wanted to gouge my eyes and ears out when he and Rachel argued about her loving Vegas too much for hours. ::gag:: He’s certainly no Jeff by a longshot! ::swoon:: ;)

Oh please…Dani thinks Dom doesn’t deserve the money because he’s too young? Forgive me if I’m wrong, but didn’t she get 2nd place when she was 21? The vets are getting too big for their britches.