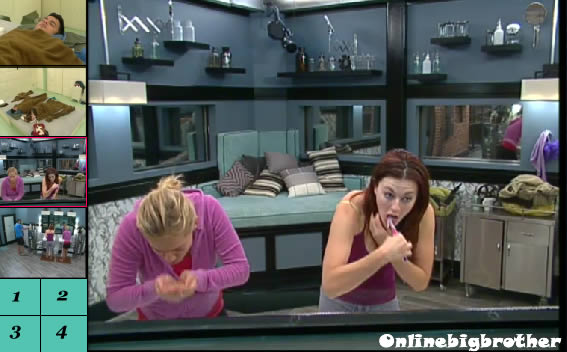 10:10pm Bathroom Houseguests waking up for the day. 10:14 Rachel and Brendon alone in the bathroom, brendon is smacking her ass says he loves when she pops her ass out when he slaps it.

10:20pm Backyard Adam, Shelly and Brendon Talking about how much weight Adam has lost. Brendon says it’s like Adam is playing Big BRother and The Biggest Loser. Adam says he’s thinking about shaving is beard off on his 40th birthday, Shelly and Brendon thinks he should for the finale. Adam isn’t sure because he doesn’t look mean enough like the guy in the picture. Shely says Adam is nothing like the guy in the picture.. 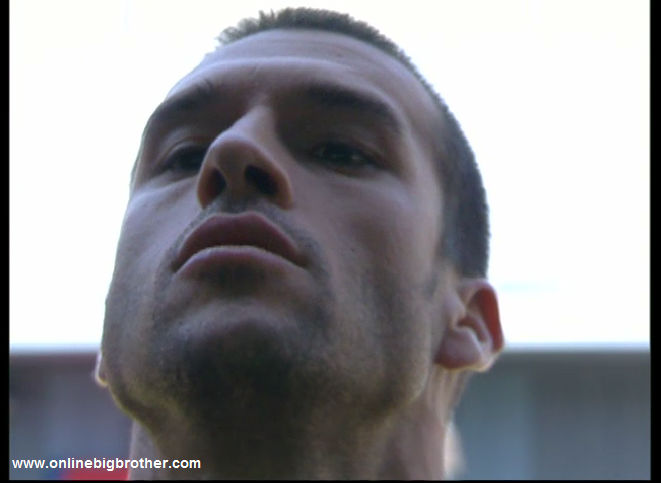 10:30am – 10:45am Brendon and Adam are in the backyard working out while they talk to Shelly who’s smoking on the backyard couch. Brendon is asking Shelly about her husband Tony. Shelly tells Brendon that her husband was in the military learning to fly. Brendon and Shelly continue talking about flying and planes. Meanwhile, Rachel is getting ready for the day putting on her makeup. Rachel finishes up and joins Shelly outside on the couch. Rachel tells Shelly that she is sorry that the comment she made yesterday during the competition. Shelly says that she doesn’t need to apologize that she was just being competitive. Shelly says that she wasn’t offended, that it was just her competitive nature. Shelly says that it will be difficult to beat them in challenges, and that there’s no one close that can beat them. Shelly tells Rachel that she just needs to learn how to lose with grace. Shelly says that she was proud of how Dominic acted when he won, how he did throw it in their faces. Rachel and Shelly talk about how much Rachel threw up during the competition. 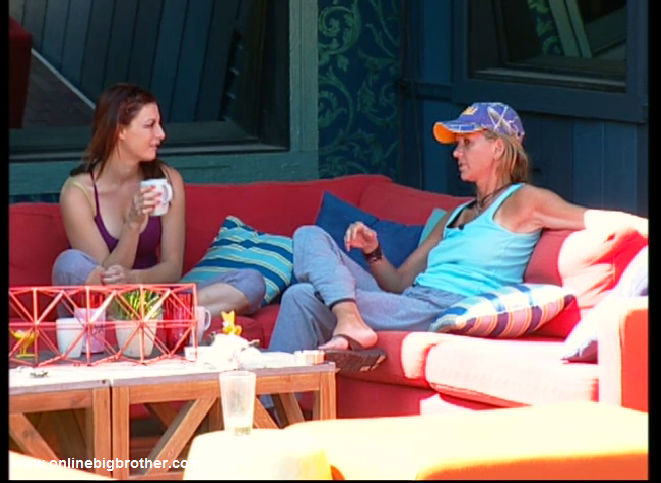 11am Rachel talks about how her and Jeff are similar and that Brendon and Jordan are similar in their personalities. They continue to talk about the competition. Adam comes over to Rachel and Shelly and they talk about how the POC ceremony will be tomorrow. They talk about how it was Sunday last week because it was the first week. Adam heads inside to change his batteries. Rachel tells Shelly that she feels like the competitions are a lot harder this season. Two of the cameras switch to the HOH room where Jeff and Jordan are still sleeping.

yeah I was surprised to.

Brenda Love it when she pops her ass out, this is how she got the big bucks before landing her meal ticket a.k.a Brenda.

nanabug
Reply to  Despicable me

Where’s this ass he speaks of? Maybe she forgot it in Vegas.

Exactly what I was thinking, she has no ass! He Is just smacking her tail bone.

Despicable Me
Reply to  nanabug

She has an ass-bone with no cartilage, that is what she sticks out LOL

nanabug
Reply to  Despicable Me

Lori
Reply to  Despicable Me

What if Shelly confides in Cassie tht she was the other vote on veterans side, and Cassie uses it against her…tht would allow Cassie to stay if she campaigned tht Shelly is a liar…but then the vets would be down a vote. When S/C go on the block, it could possibly go Cassie’s way, and then which side would she take w Dom? B/R, Dani, Dom, Pinto would all vote the same…who would vote w Jeff? Adam and Kalia?

I wonder just how bad she acted “” during the comp.. Does anyone know what she did to piss everyone off this time?

Despicable Me
Reply to  Brandi

The day Rachel loses with grace, that’s the day Earth becomes a Utopia.

Despicable Me
Reply to  Brandi

She went off on Jeff about him defending Jordan telling her not to get the 2 week slop, that he didn’t tell her too, something like that..

Jordan is not in it this season, its obvious she’s only doing this for Jeff. That being said, they are in the perfect position to take out their only competition! I hope they get with it and put up Brenchel. The house then votes rachel out, and all three members of her alliance have golden keys and are rendered useless. Couple that with losing Brendon and her slop….shell destruct faster than Kanye at an awards show.

I hope it’s top 10 now. Now is really boring me to death

I am already sick of rachel. She is constantly creating drama to get more camera time and she is the worst actress ever. I love jeff and jordan but I’m worried that they are being manipulated too easy. It is getting way too hard to watch the live feeds bcuz rachel is disgusting and annoying. she is also very jealous and intimidated bcuz cassi is so much prettier and classier than she is. Thats why she wants her gone. Pure jealousy