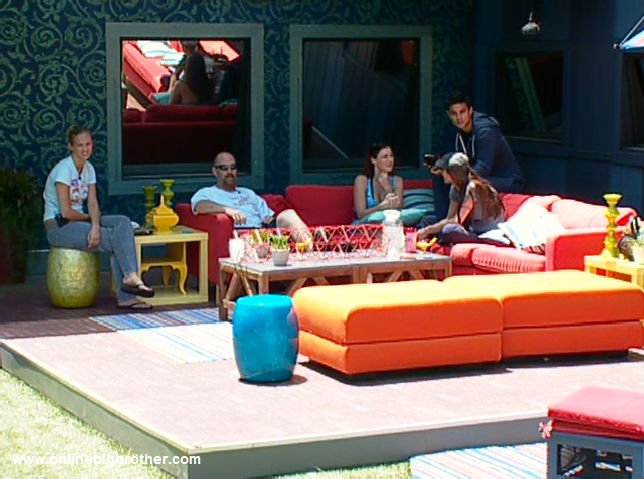 12pm – 12:30pm Dominic, Adam, Rachel, Cassi and Porsche are sitting out on the backyard couch talking about random things. Then they start joking around saying that they are going to hold a court case to find out what happened to their fake turtle Franklin. Dominic says that if the thumb print fits you must acquit. They joke around when Lawon comes out and say that he may or may not be a prime suspects: Brendon, Lawon, and Shelly. They talk about how Lawon was jealous of Franklin. Lawon said he didn’t even like turtles. Lawon said he just woke up and was confused by all of this… Adam says that all you need is reasonable doubt. Keith will be the judge. They talk about bribing the judge, but aren’t sure how they could do it.They are all joking around talking about how the case will go and who are suspects. They talk about who to blame and about how they may or may not plant evidence. They say that it took several hours for Brendon to report Franklin’s disappearance. Dominic says that people may think we’re talking game right now, but we’re talking turtle evidence. Rachel says that she may sue Brendon for being unemotional. Rachel heads inside the house. They others discuss who the witnesses, jury, and judge will be…. Adam says that he be the bailiff. The attorneys involved will be working pro bono, will be issued, the court case will take place in the living room at 9 p.m. Big Brother time, houseguests with big hands will be questioned. Witnesses will need to swear on a Bible before testifying. 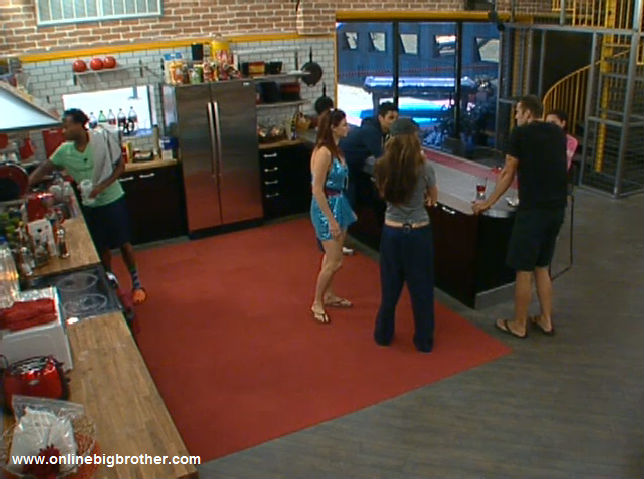 12:40pm Brendon, Cassi, Rachel, Lawon, Dominic and Porsche are in the kitchen talking about the case. Brendon says that Cassi will be their turtle-ologist… Rachel says that they already contacted her as a witness. Cassi says that she doesn’t even know much about turtles. Brendon says okay we will have Porsche as our turtle-ologist then. They run around the house collecting evidence. Cassi and Rachel run up to the HOH room and grab the cow costume as evidence. Brendon tries to stop them. Porsche comes up and says that their side can use the cow costume against them. Brendon wants photos of the cow costume take to make sure that its not tampered with. Brendon finds something green in the garbage and says that he is taking it into evidence. 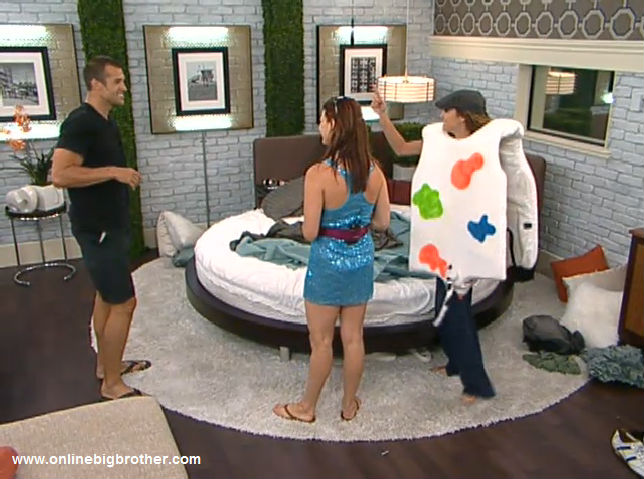 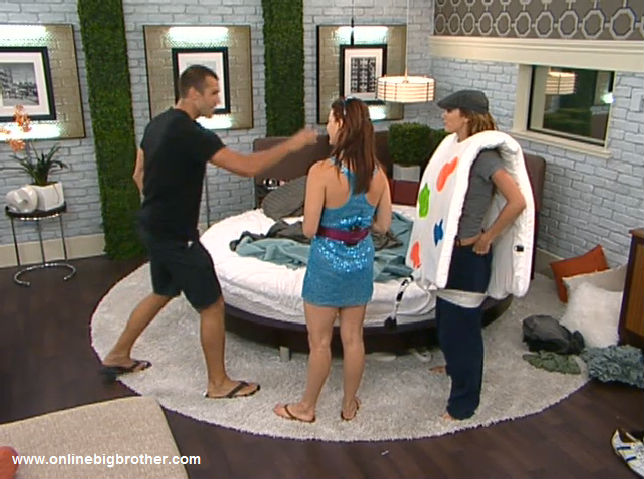 12:55pm Dominic, Rachel, Brendon and Lawon go into the backyard and go over to Jeff and Jordan to ask for the right to confiscate Brendons bag into evidence. They issue a to Jeff and he grants the authorization to confiscate Brendons Big Brother bag into evidence. They head back inside and are still laughing and talking about the case. Lawon starts yelling just make sure you have your turtles in order!!! 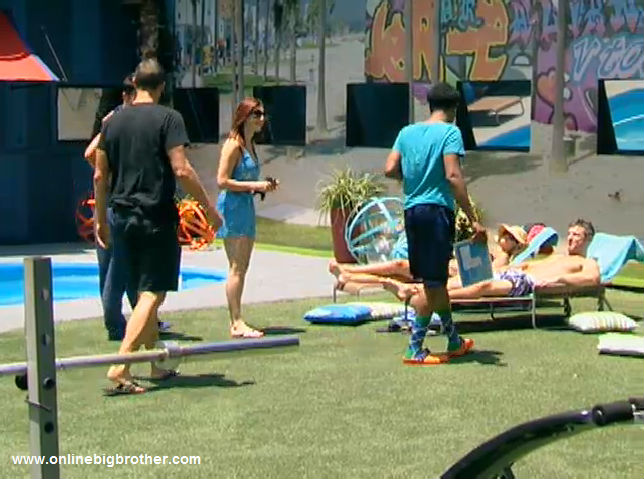 1:10pm Jeff, Porsche, Cassi, Brendon, Dani, Dominic are in the kitchen talking about the case. Jeff says that he wants some stuff for a costume. They say that maybe he can borrow some of Lawons . The others start telling him that he can’t have it. Jeff tells them ..no ..no everyone’s got to look good! Jeff heads out into the backyard and talks about how he already has a ton of movie lines running through his head that he is going to use in the case. Dani asks what the sentence is for tampering with evidence? Brendon says that he is pretty sure its life in prison. Dani then asks so if she is found guilty are we going to take her into the backyard and stone her? Brendon says yeah of course. Out in the backyard Jeff, Jordan and Rachel are suntanning talking about the case. Rachel tells Jordan that her and Kalia are the jury memebers. Rachel talks about Brendon being guilty because they found green flippers in his confiscated Big Brother bag. Rachel says turtle flippers! Jeff yells that was totally planted… Rachel says Can you prove it!??? 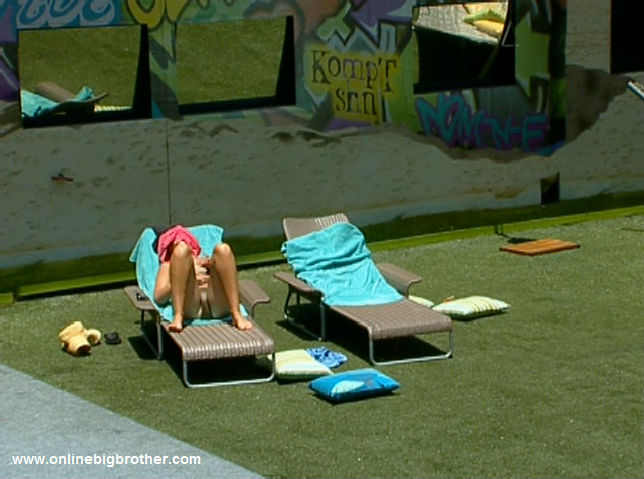 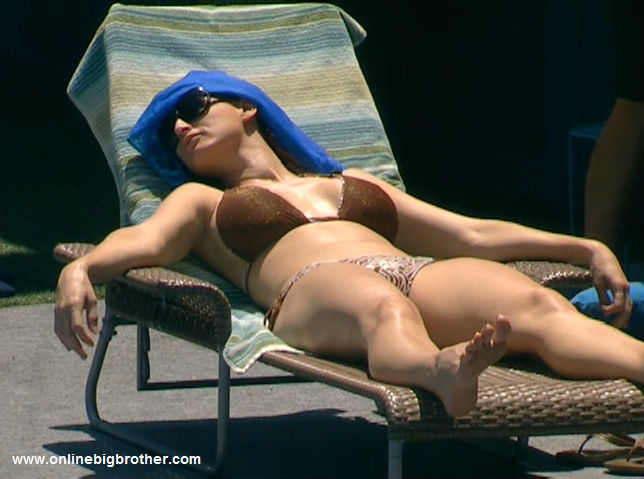 1:25pm – 1:35pm Big Brother calls for an outdoor lock down… All the houseguests move out into the backyard…

The feeds are so BORING this year…
I want DRAMA!!!!
I think CBS expected Rach to cause drama, and she hasn’t been, YET, so this is a boring season, especially since Evel Dick is gone. I hope for an argument or a blow out fight soon.
*SIGH*

agreed, yet this only the 1st week maybe in the next 2 or 3 weeks when the power keeps changing there will be more fights

Rachel and Brendon are famous for their temper tantrums and name calling when the power shifts! Be patient you all! ha ha ha

The turtle stuff is killing me. As in, killing me with stupidity. I’m annoyed they’ll be making a deal about it tonight.

Collette – love your blog! Much more entertaining than the show!

I don’t care what they do as long as they don’t play the big booty game anymore. I still have no clue what’s so funny/fun about that game. Sookie (Jordan) is as interesting as that corpse from ‘Weekend At Bernies’ does she ever participate in anything?

Jordan is disgusted with these players and wants to get the first evict and next HOH over. Plus Jeff said her monthly friend is on the way.
No excuse though to be completely out of game. She should step it up soon or go home.